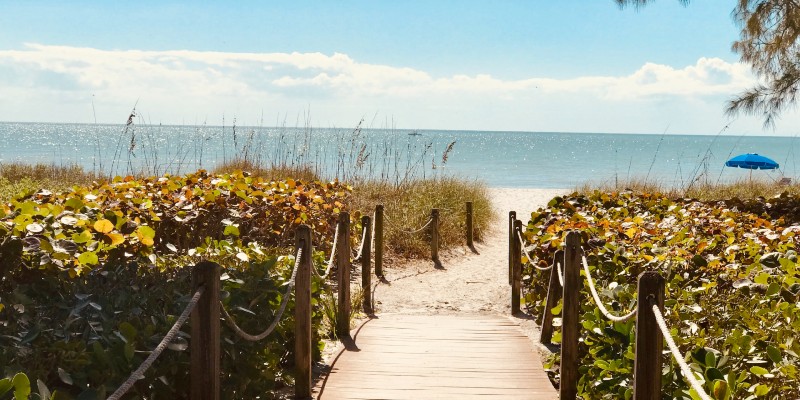 Retired spies flocked to Sanibel Island in the 1970s. Soon they launched a newspaper and a campaign for self-determination.

On Florida’s Gulf coast near Fort Myers lies a sparkling island named Sanibel with about 7,000 residents. The island is known for two things.

One is the dazzling array of seashells that wash ashore on its gleaming white beaches. For more than a century, shell collectors from around the world—including such big names as Thomas Edison, Edna St. Vincent Millay and Raymond Burr—have visited Sanibel to search the sands for the finest coquinas, lightning whelks and lion’s paws. The locals joke about the popular tourist “dance” move, the Sanibel Stoop.

Sanibel’s other claim to fame is as the home of novelist Randy Wayne White and his hero Marion “Doc” Ford, a marine biologist who used to be a spy. Through 26 novels (so far), Doc has been repeatedly called back into action to right wrongs, protect the weak, solve crimes and so forth. The series has sold so well that Sanibel is also home to a seafood restaurant called Doc Ford’s, where in addition to the grouper and crab cakes, you can buy Doc Ford shirts, hats and hot sauce.

How, you may ask, did White—a former fishing guide turned author—come up with the idea of planting a globe-trotting ex-spy amid the landscape of laid-back, super-casual Sanibel?

Easy. He drew from real life.

Sanibel is the only place in America to be incorporated largely through the efforts of former Central Intelligence Agency employees. One even became the first mayor.

Florida has plenty of unusual communities. There’s Nalcrest, built for retirees from the National Association of Letter Carriers (no dogs allowed!); Cassadaga, a haven for mediums that bills itself as the Psychic Capital of the World; and Gibsonton, home to so many ex-carnies and sideshow performers that it was featured in an episode of The X-Files called “Humbug.”

But a town run by ex-spies? That’s odd even for Florida.

White makes it clear he, personally, is not a former spy. He was never affiliated with any covert agency in any capacity. He’s been a guide, a magazine columnist and a novelist—that’s all. What he knows about foreign countries he has gleaned from his work for Outside magazine.

But you can’t live and work in a small town like Sanibel without picking up a few clues about the neighbors, he said.

One story that made the rounds: CIA agents who trained Cuban exiles for the Bay of Pigs invasion on nearby Useppa Island fell in love with the area and moved to Sanibel when they retired.

There is a factual basis to this one. Useppa was indeed the training ground for that particular foreign policy fiasco. The Useppa Island Historical Society’s museum maintains a permanent exhibit about it.

But Porter Goss, an ex-spy who’s been a friend of White’s for four decades, says the Bay of Pigs is not the reason he wound up trading in his trench coat for cutoffs and flip flops.

Instead, it was a more personal connection.

Goss, raised a Connecticut Yankee, graduated from prep school and Yale and spent two years working for Army Intelligence before he was recruited to join the CIA.

To prep this preppie for undercover work, the spymasters put Goss through a training course that covered “everything from lock-picking to very esoteric, mind-bending intellectual training,” Goss told the Miami Herald in a 1987 story headlined, “A little intelligence goes a long way, politicos say.”

He spent 10 years as a junior clandestine officer in places he can’t mention doing things he can’t talk about. A 2004 Guardian profile says Goss, who speaks fluent Spanish, was based in Miami during the Cuban Missile Crisis of 1962 and “had some interesting moments in the Florida Straits,” and later he recruited and supervised agents targeting Communist infiltration of labor unions in Central America and Europe.

But around 1970, he fell seriously ill. Systemic blood poisoning caused a heart infection and kidney problems. After months in a London hospital, “my doctor said I needed a place with some peace and quiet,” Goss said.

That’s when one of his former bosses invited him to bring his family to Sanibel—which would soon be full of anything but peace and quiet.

Goss had vacationed on another nearby barrier island, Boca Grande, and found it to be “absolute heaven,” he said, so persuading him to move his family to Florida’s Gulf coast didn’t take much work.

The invitation came from Don Whitehead, a onetime political science professor who had a yen to write—and who also was an ex-CIA man who had been Goss’ supervisor.

When Whitehead retired, he and his wife Grace had searched all up and down the state’s Gulf coast for a beachfront condo they could afford. What sold them on Sanibel was a comment from a real estate saleswoman that there were no condos on Sanibel and never would be.

With its natural beauty and slow pace, Sanibel seemed different from all the other places they’d lived. They had ended up building a modest one-story block home with a swimming pool.

“They found us a place to stay—a small house on a back lane—while I continued my recovery,” Goss said.

As an agency employee in the 1960s, Valtin “helped the Germans establish a postwar government under the auspices of the CIA,” his widow later told the New York Times. “He hung around with Willy Brandt and helped build the Social Democratic Party.”

By the time he retired in 1973, Valtin was director of Planning, Programming and Budget of the CIA’s Directorate of Operations.

Once they were all together on Sanibel, the three families spent so much time socializing, Goss’s son Chauncey recalled, “I grew up thinking everybody worked for the CIA.”

Just for fun, the three ex-agents started a boat rental company, keeping their meager profits in a shoebox. The fun ran out pretty quickly.

“It became very clear, when we were cleaning fish goo off the boats with no-see-ums eating us alive in the 90 degree heat, that this business was getting a little old,” Goss said.

Because Sanibel was an unincorporated community, its future lay in the hands of the Lee County Commission. Lee County is named for Gen. Robert E. Lee, even though he never set foot there. The commissioners meet beneath a portrait of the Confederate leader gazing down at them with a look of vague disappointment.

When Whitehead, Goss and Valentin started the Island Reporter in 1973, Goss began attending the commission meeting. He would drive over to the county seat of Fort Myers to gather intel—or “take notes,” as reporters call it. Then he would pass his observations along to Whitehead, who would write them up in newspaper story form.

It didn’t take long to see that they had gotten involved in something even nastier than fish goo.

At that time, most Florida county governments were unabashedly pro-development. The Lee County commissioners went beyond that. They saw no reason to reject any development plans anywhere.

And they and their developer pals had set their sights on quiet, lovely Sanibel, even if it involved putting a string of tacky condominiums right on the beach.

“There was a growth-versus-no-growth division on the island at the time, but the black-hat developers were in the minority,” Goss recalled. “But that’s the group that held great sway with Lee County. Sanibel was the goose that laid the golden egg for Lee County.”

The Island Reporter took an editorial stand: Sanibel should incorporate so it could chart its own course. Otherwise, say goodbye to the things that make the island so beautiful, they wrote.

The county commissioners and their developer friends struck back, painting a picture of the pro-incorporation forces as elitists who had their slice of paradise and didn’t want to share it. They also argued that Sanibel was too small to be a city. To Goss it was pure propaganda, easily exposed as such by the feisty little newspaper.

“Don and Fred and I had seen this kind of action before,” he explained. “If you’re a CIA officer working in a foreign country, you’re going to see how propaganda works, including some cases where you’re involved in creating it. We knew how to expose some of these tactics.”

Sanibel voters flocked to the polls and, in 1974, overwhelmingly supported incorporating as a city so they, not the Lee commissioners, could control the future of their island. When they picked their first council members, the council then selected Goss as the island’s first mayor.

“I was everybody’s second choice,” he joked.

What that meant was that he was the one who was handed the legal papers every time a would-be developer sued the city for not approving a project that conflicted with Sanibel’s new, restrictive comprehensive plan for future growth.

“The process server was a regular at our house,” Goss said. “We’d usually offer him a beer and a sandwich.”

Disgruntled developers blamed the federal agency that once employed their nemeses, complaining that the CIA was buying up property and would take over the island. But Goss makes it clear the trio operated independently from the agency, which is forbidden by law from carrying out operations in the U.S.

“The CIA recruits leaders, and they train you to lead,” he explained to the Herald for its 1987 story.

The paper noted that Goss had been succeeded as mayor by his fellow CIA retiree Valentin. Meanwhile, the mayor of nearby Naples was a former member of the CIA’s predecessor agency, the Office of Strategic Services, and in another nearby town, Cape Coral, there was another CIA retiree who had served as a council member and mayor.

By contrast, three of the county commissioners who had opposed the Sanibel incorporation were busted for, among other things, taking a boat ride with prostitutes, courtesy of the county’s sewer contractor. The contractor was himself acquitted of bribery, but later convicted of stealing $1.7 million from a public highway project.

In a nice irony, one of the people that Democratic Gov. Bob Graham appointed to fill out the term of one of the ousted commissioners was none other than Goss, a Republican. He would then go on to win election to a seat in Congress, where he spent eight years as chairman of the House Intelligence Committee. and then was appointed CIA director, where he served for two years before retiring all over again.

But did any of the ex-spies who retired to Florida ever hire Randy Wayne White as a fishing guide before he became a bestselling novelist writing about an ex-spy?

“If they were they never shared that info with me,” White said. “Who knows?” 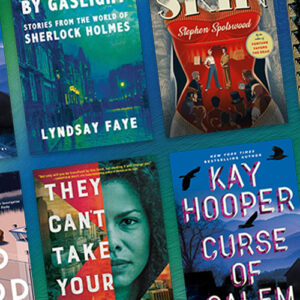 At long last, December is upon us, and so, too, are the slow, creeping days of winter, ready to be filled with crafting,...
© LitHub
Back to top