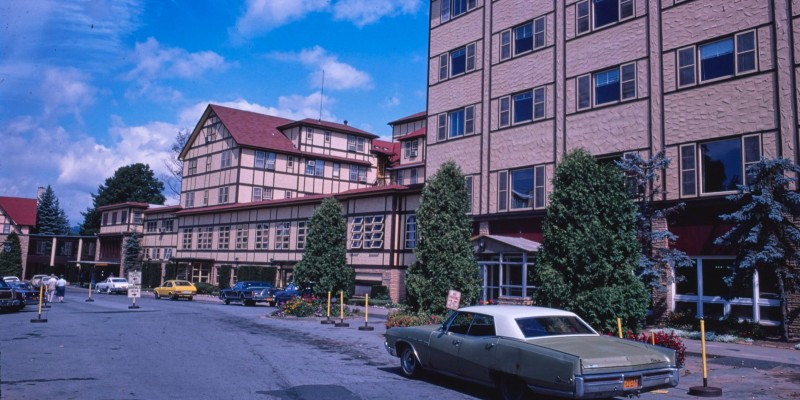 A novelist returns to her hometown and says goodbye to an icon.

When I heard, in the summer of 2018, that a landmark of my childhood, Grossinger’s Catskill Resort Hotel, famous for launching the careers of countless stand-up comedians and as the inspiration for the movie Dirty Dancing, was being demolished, my first reaction was sadness. I grew up in Liberty, New York. The buildings of “the G” rose on a hill overlooking the village, dominating the landscape.

I’ve lived in Maine for the last fifty-plus years and don’t often get back to Sullivan County, but I still think of Liberty as home. My father’s family settled there generations ago and ancestors on both sides worked in the farm/boardinghouses that housed summer people in the days before the first big resort hotels were built. Grossinger’s started out as one of those. My maternal grandparents were still running one when I was a little girl. At my house, we took in a roomer during “the season”—a man from New York City who wanted to escape to a place that had fresh mountain air and cooler temperatures. Many families in the area made a little extra money that way every summer.

When I started my writing career, I used Sullivan County as the setting for a couple of my earliest books, one for children and a category romance. Later I put both Liberty and a farm/boardinghouse front and center in one of my historical mysteries. More recently I’ve been writing cozy contemporary mysteries. The fictional town in Maine where my Liss MacCrimmon series is set just happens to have an old fashioned grand hotel on its outskirts. One of my romance novels had one, too. I may have moved away from the Borscht Belt, but growing up in that area obviously had a lasting impact. Even though I was never a guest there and never worked there, the G was a part of that.

In 1986, when the Grossinger family sold the resort, it consisted of thirty-five buildings on 1,200 acres. Among other amenities, it boasted a golf course, three ski slopes, an airport, an ice rink, and a post office with its own zip code. During my childhood in the 1950s and early 1960s, the population in town more than doubled every summer thanks to the influx of guests at the G. Tourism brought an economic boom to the entire area. There was business enough to keep three ladies’ dress stores open in the village, even though guests at the G didn’t have to leave the resort to find a variety of specialty shops. To the delight of local children, a second movie theater opened every Memorial Day for “the season.”

Hollywood celebrities came in droves. World champion boxers had a training camp on the grounds. We didn’t often see them downtown, but we knew they were there. While I never spent much time at the G, it was always a presence in my life. Particularly memorable was a visit to the airport when I was five or six years old. Later, if I’d been more athletic, I might have taken advantage of lessons at the ice rink or on the ski slopes. I had friends who did, and other friends who worked at the hotel as soon as they were old enough.

When I left Liberty after high school, business was still booming, but in the years since, as other destinations became more accessible to vacationers, the resort hotels of the Sullivan County Catskills, including Grossinger’s, underwent a slow, painful decline. Today, Liberty’s boarded-up storefronts are stark evidence of the impact losing that business had on the local economy. That was what I remembered when my editor first suggested that I consider using an older sleuth for the second cozy series I wanted to launch. That this discussion coincided with my fiftieth high school reunion and a nostalgia-filled trip home to Liberty for the festivities was pure serendipity.

Writing from the point of view of someone my own age has turned out to be great fun. At the plotting stage for what became Crime & Punctuation, the first book in the “Deadly Edits” series, I started by asking myself one question: What would my life be like if I left Maine and moved back to Liberty? Since I’d need a reason to do so, I decided that the fictional me, unlike the real one, would be a recent widow in need of a change of scenery. Since that wouldn’t be quite enough incentive to pull up stakes, I pondered a bit more and came to the conclusion that if I had the opportunity to buy back the house I grew up in, I’d be seriously tempted.

My fictional Catskills town, Lenape Hollow, shares many elements in common with Liberty, including the ruins of a once famous resort hotel on the outskirts of the village. As they were at Grossinger’s, the buildings at my fictional Feldman’s Catskill Resort Hotel were abandoned and allowed to fall into disrepair after the resort was sold to a developer. Graffiti decorates both interior and exterior walls, vegetation grows up through the cracks in the Olympic-size pool, and broken windows and debris are everywhere. What was once a star attraction in the area, bringing prosperity to everyone in the community, is now nothing but an embarrassment and an eyesore.

In Clause & Effect, I created the character of Sunny Feldman, the last surviving member of the family that founded the resort. My series heroine, Mikki Lincoln, has been in conflict with a certain real estate entrepreneur in Lenape Hollow since Crime & Punctuation. It wasn’t much of a leap to have him buy the hotel grounds and announce, in A Fatal Fiction, that he plans to demolish the remaining structures. Of course, as with most sinister and money-hungry developers, he immediately turns up dead. That’s why, when I first heard about the imminent demolition of the buildings at the G, my second reaction was to think “what a great place to hide the body!” 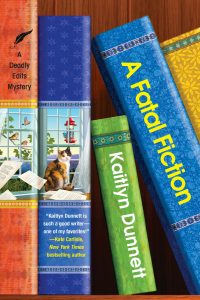 KAITLYN DUNNETT grew up in the Borscht Belt of New York State, otherwise known as the Sullivan County Catskills, the area she writes about in the Deadly Edits mysteries. These days, Kaitlyn lives in the mountains of western Maine with her husband and cats and can be reached through her website at www.kaitlyndunnett.com.
http://www.kaitlyndunnett.com 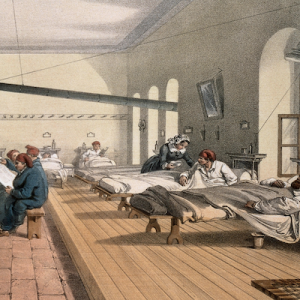 Early on when I was trying to get published, I often felt like I had this secret identity as a writer, and my real-life identity...
© LitHub
Back to top