Author Stephanie Wrobel breaks down the 9 type of twist endings and the books that executed them best.

In the best books, the twist is the icing on the cake. As a reader I don’t want to race through a book for the twist; rather, I want it to take me by delightful surprise as the story reaches its denouement. The best twists are clever, unexpected, and seem effortless—but of course, writers know how much effort goes into devising them.

We should first define what exactly a twist is. I like the description Sophie Hannah came up with in her own CrimeReads essay: a twist overturns or negates an already drawn conclusion or a firmly entrenched and reasonable assumption. A twist is more than a surprise ending.

I’ve spent a lot of time studying twists: what they are and are not, what makes them satisfying or predictable, whether there are any rules we writers should abide by when concocting them. One piece of advice that has stuck in my head came from my mentor, Mako Yoshikawa, who suggested it was cheating to have a first-person or close-third narrator know something but not share it with the audience. Now I can think of plenty of thrillers that defy this rule—where the twist was something the narrator knew all along—and my enjoyment of those stories certainly didn’t suffer. But I do try to hold myself to this rule. To each their own!

There are loads of types of twists in literature, so I don’t mean to suggest with the title of this essay that there are only nine. But the following nine are prevalent in the suspense genre. If you’re stumped on what to do with your own work in progress, perhaps you can consider one of the following plot twists.

[SPOILER ALERT—I provide examples for each kind of twist. If you don’t want to find out the twists for the following books, do not keep reading: Rebecca, Gone Girl, Sharp Objects, The Woman in the Window, Station Eleven, We Need to Talk About Kevin, Eleanor Oliphant is Completely Fine, Shutter Island, The Silent Patient, The Wife Between Us, Fight Club, My Sister’s Keeper, Before I Go to Sleep. I’ll keep the references vague, but seriously, spoilers are coming! You’ve been warned.]

1. Someone you thought was bad turns out to be good. &

2. Someone you thought was good turns out to be bad.

Caveat: The best characters are both good and bad. None of us is pure evil or a perfect angel. I’ve oversimplified the headings for the sake of clarity. Put simply, these twists are the classic case of the reader trusting the wrong character. Many of us have read hundreds of suspense novels. We know how the “bad guy” is supposed to look and behave. We try to pin down the perpetrator the first chance we get. The sly writer knows this and plays on our innate need to categorize and judge. In books like Emily St. John Mandel’s Station Eleven, A.J. Finn’s The Woman in the Window, and Gillian Flynn’s Gone Girl and Sharp Objects, one of the central characters that the reader perceives to be kind, or at least well-meaning, turns out to be the culprit. Then you have a case like the matchless Rebecca, where our perceptions of the main characters bounce between good and bad like a game of table tennis.

3. Someone presumed dead is alive. &

4. Someone presumed alive is dead.

These switcheroos leave the reader flabbergasted but (hopefully) wowed. The best example of this twist, in my opinion, is Lionel Shriver’s We Need to Talk About Kevin. I can still remember getting to the end and breaking into a grin at the sheer brilliance. These twists are also well executed in Eleanor Oliphant is Completely Fine by Gail Honeyman and The Woman in the Window.

5. Someone presumed sane is crazy.

This twist is tricky to pull off in a close narrative style. Perceptive readers can tell when something is off about their storyteller. The writer has to craft a character we trust throughout the story, as well as one we believe was actually insane all along in the end—and they have to be the same person! Dennis Lehane nails this twist in his masterpiece Shutter Island.

6. Two characters turn out to be the same person.

If not done with precision, this twist can feel gimmicky or lame. But I believe readers—especially crime readers—enjoy having the rug pulled out from under them, so long as you’ve earned that rug pull. Two variations on this twist: you can have two narrators actually be the same person but in different times of his/her/their life, a la The Wife Between Us by Greer Hendricks and Sarah Pekkanen. Or you can have one narrator plus another important character turn out to be the same person, using a character device such as a split personality. The classic example of this is Chuck Palahniuk’s Fight Club.

7. Someone different is in charge than you thought.

Put another way, the person you thought was driving the story is actually just a passenger. I love this twist because it encourages conversations about power—the dynamics and imbalances we encounter in thrillers, as well as everyday life. For a less murder-y example, look no further than Jodi Picoult’s My Sister’s Keeper. Throughout the book we assume Anna is the one driving her emancipation effort because she’s tired of existing solely to keep her sister Kate healthy. Later on we discover that Kate is the one who asked Anna to sue for emancipation because she’s tired of fighting her illness. Talk about a one-eighty in the reader’s perception of who’s driving the story.

8. Someone isn’t who you’re told they are.

This character could have done something wrong but the reader doesn’t know it yet. They might be posing as someone else or withholding information that would implicate them in whatever misdeed is being investigated. Conversely, some characters turn out to be more capable and critical to the story than the reader has been led to believe. This person is typically hiding in plain sight. Examples of this twist include Before I Go to Sleep by S.J. Watson, The Silent Patient by Alex Michaelides, and Behind Closed Doors by B.A. Paris.

9. The story’s timelines are not what you expected.

Again, much finessing is required to make this twist work, as too much time hopping can leave the reader confused. (Side note: For a brilliant study in frequent time hops that keep the reader firmly grounded, read Station Eleven.) I’d imagine a lot of advance planning is required to pull this one off. Once again, The Wife Between Us serves as a good example. We assume Vanessa and Nellie are two different characters, both in present-day. In reality, they’re the same person—Vanessa is in present-day and Nellie is in the past. By manipulating time this way, you can fool the reader.

A few more observations in my study of twists: The more close-POV characters you have, the harder it is to pull off a twist. Presumably you want the twist to involve one of the main characters, as it’s (usually) less satisfying to have a secondary character pull the wool over everyone’s eyes. You want one of the main characters to be “behind it.” If you’re going to operate by the knowing but not sharing is cheating rule, then the more narrators you have, the harder it is to have a main character who is clueless to the plan, like we want the reader to be.

If you’re committed to using multiple narrators, I’ve found it easier to create a twist when the characters operate in different timelines. In the past timeline, the thing hasn’t happened yet. In the present timeline, the narrator doesn’t yet know that the other narrator did the thing. This is the framework I used for my own novel, Darling Rose Gold. Patty Watts, a mother with Munchausen syndrome by proxy, narrates the present timeline, suspicious of her daughter’s motives but without any clue as to what’s in store. Her daughter, Rose Gold, narrates the timeline in the past, which covers the five years while Patty is in prison. Rose Gold’s story arc begins with her as a troubled young woman, trying to find her way in the world. She has no idea what she will later become capable of.

Stephanie Wrobel grew up in Chicago but has been living in the UK for the last three years with her husband and dog, Moose Barkwinkle. She has an MFA from Emerson College and has had short fiction published in Bellevue Literary Review. Before turning to fiction, she worked as a creative copywriter at various advertising agencies. Her new book, Darling Rose Gold is now available from Berkley Books. 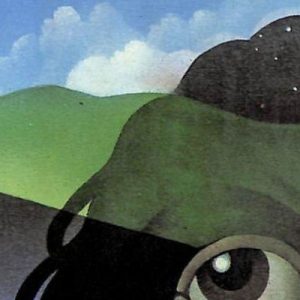 It's a game that I play with friends sometimes: can we think of a book that, technically, isn't a crime novel? It’s harder...
© LitHub
Back to top