In Noir, Geography Is a Character

Laird Barron on Writing the Harsh Landscapes of Alaska

The world imprints upon us in different ways, with varying results, but there’s no doubt geography actively shapes the imagination of a writer, whether by direct experience, or through the filter of cinema, literature, or the good old oral tradition. Mythology, legends, and fairytales are replete with numinous encounters upon lost shores and untracked forests. Humanity has been locked in a death struggle with the wilderness since the beginning. We mounted incursions with steel and fire, we laid down roots, slashed, burned, and paved over the natural topography. What we couldn’t tame, we reviled or romanticized as the case may be. The original love-hate relationship two-hundred-thousand years in the making.

A decade ago, bound for the World Fantasy Convention in San Jose, I stared out the window of a light commercial plane swooping in low over the Central Valley. Low enough I made out details of oak trees covering big hills and the rusty check patterns of the yards of individual homes. Country roads radiated like nerves from a plexus. Cars crawled along those snaking roads through golden dust. The rumpled land subtly descended toward the haze of the Pacific. I realized this was where Michael Shea got his flavor. This “obvious” revelation slapped me in the face.

Mythology, legends, and fairytales are replete with numinous encounters upon lost shores and untracked forests. Humanity has been locked in a death struggle with the wilderness since the beginning.

Michael left us too soon five years later in 2014. His memory looms large in the weird fiction and horror fields as the man who wrote the landmark collection Polyphemus. A deep vein of mystery and noir travels through his work, grounding the fantastical tropes. I’d read him since my latter teens, absorbing the unique cadence of his prose without giving conscious thought to how echoes of the natural world inflected his grimiest urban settings, how the superstructures and sprawl of his version of LA and San Francisco were influenced by the ancient earth they occupy.

Tooling around Wine Country—seeing it as Michael did and connecting the experience with the vibrant descriptions in his tales—reinforced the importance of the land as an element of his artistic voice, and the voices of numerous other writers I admire. I’d published one collection at the time; this small epiphany encouraged me to credit the role of the landscapes of the Pacific Northwest and Alaska in my own stories and to more aggressively develop that aesthetic component.

When I was a kid living in a cabin on the Yentna River, our family hunkered inside around sunset. Out the front window in the near distance lay the gently rounded slope of Mount Susitna, the Sleeping Lady. A bit farther north, Denali rose like a bloodied spike. Between those two landmarks, rivers coiled, mosquito-plagued swamps festered, and copses of white birch and black spruce marked intervals of devil’s club and alder thickets. Black bears and moose lurked in the underbrush; fox and lynx, too. The occasional wolverine, if you happened to find yourself in the Petersville hills. Come winter, great blue-green ice floes crushed together on the Yentna like an elemental gnashing its teeth. Swamps glassed over and the thickets turned white with hoarfrost. Denali’s stormy halo darkened to iron and those who attempted to scale her died. Traveling the river, by boat or dog team, I saw that mountain no matter which way I looked. And yes, I thought of the climbers, many hailing from far-off lands, entombed upon her heights.

Dad, a Marine and hunter, barred the door after the family retired for the evening. He also kept a loaded shotgun within grabbing distance. His precautions weren’t fearful gestures, per se, but rather an unconscious genuflection to Mother Nature herself—and as protection against the bestial aspects certain men assume upon roaming the wilds, free of the restraints of civilizing custom. When George RR Martin says the night is “dark and full of terrors,” he’s merely paying homage to what everybody’s known in their bones since hominids slept in the treetops.

Denali’s stormy halo darkened to iron and those who attempted to scale her died. Traveling the river, by boat or dog team, I saw that mountain no matter which way I looked.

My experiences were unusual for contemporary times, yet hardly unique. It’s evident that among a subset of writers, the incorporation of geography as a character is a tradition, if not a defining trait. Cormac McCarthy’s old west and historical Appalachia settings, Stephen King’s small-town Maine on the periphery of demon-haunted woods, and Jack London’s far north wilderness are imbued with significance and personality rivaling the authors’ human (canine in London’s case) protagonists. One of my favorites in any genre, Martin Cruz Smith, has demonstrated a masterful grasp of depicting the Southwest in the thriller Stallion Gate and an early full-bore B-movie horror novel, Nightwing. You can hear the sage rustling and taste the dust when you’re immersed in Smith’s universe.

I’ve said it before, and it bears repeating: Writers are ever in dialogue with those who precede them. We emulate, we rebut, we strive to contribute something of value to the grand mosaic. Louis L’Amour and the aforementioned McCarthy didn’t simply enthrall me with their diametrically opposed takes on lonely prairies and sun-scorched salt flats, scrub plains and low mountain spines carved from the carrion body of the West; they communicated to me in a language my hindbrain understood and wished to reciprocate.

I don’t harbor gentle memories of my birthplace. Some of my relatives are more sanguine; a handful live there to this day, as do the majority of associates and friends I made in the old days. Robert Service, legendary poet of the early 20th Century, cultivated a largely romantic view of the Great North during his brief sojourn across the border into the Yukon. Possibly because he led a fairly sheltered existence as a bank employee in Whitehorse and Dawson, fed a diet of tall tales by mountain men and prospectors. Whatever the case, Service’s poetry wielded a strong influence on my adolescent mind, especially his ballads of intemperate men coming to violent ends in a desolate land where the stars shine with cold, jagged brilliance and the wind howls down from an interstellar void.

Despite an ambivalent history with the so-called Last Frontier, I owe it a debt. Alaska’s austere immensity scored and pitted my imagination like acid. Radical swings of temperature, shifts between endless twilight and unrelenting darkness, and the sense of my own minuteness acted as a curing process in regard to my brain. A foundation embedded somewhere down there in the murk that divides the waking mind and the abyssal depths of our collective subconscious. Everything I’ve built is built upon that foundation. Even when I’m not writing about the wilderness, it’s right there, looming, informing.

Despite an ambivalent history with the so-called Last Frontier, I owe it a debt. Alaska’s austere immensity scored and pitted my imagination like acid.

In the mid-1990s, I departed the Matanuska-Susitna Valley, migrated to Olympia, and committed myself to writing professionally. I immediately drew a sharp contrast between the brutal and seemingly inimical disposition of Alaska and the softer, mysterious character of the Northwestern wilderness. The Olympic Peninsula in particular spoke to me; its massive evergreen forests that have never been fully tamed, its lost towns, and overgrown railroad tracks were the direct inspiration for my first three collections. And though my authorial lens occasionally focused abroad, it unerringly returned to Olympia and environs.

Now, I’m ensconced in New York’s Rondout Valley near the Catskills. Seven years and counting; some days, I still feel a bit like an interloper, a tourist. Neither acclimation nor habituation transpire overnight. I feel the shift, though. The change in my blood. My current series of crime novels is centered here and profits from the rich history and natural splendor of the region. Physically, these hills, mountains, and forests remind me of the Pacific Northwest.

However, in my dreams I increasingly drift home to Alaska, picking at the old wounds. To reiterate, it would be incorrect to presume that provenance and environment reliably correlate to a certain literary method or style, but looking over the evidence, that’s how it went for me.

Maybe this is another way of handling those two infamous questions every author receives: Where do you get your ideas? Why do you write what you write? Because I lived where I lived and saw what I saw, and now it haunts the stories I tell, being my personal answer. What else could I do, but what I’ve done? A glance at the bookshelf assures me that I’m not alone in this sentiment.

The Real Lives of Private Investigators 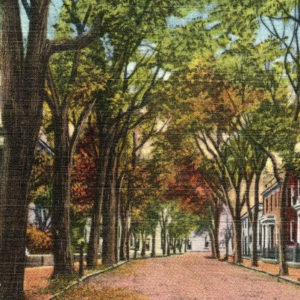 The first true crime book I ever read was called Fatal Vision by Joe McGinnis, about the Jeffrey MacDonald case in which...
© LitHub
Back to top