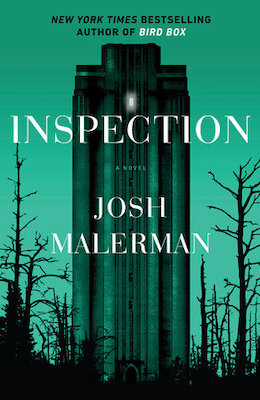 The following is an exclusive excerpt from Inspection, the latest tale of gothic horror from Birdbox’s Josh Malerman, in which the most precocious young girls and boys are segregated by gender into distinct and isolated schools on opposing ends of a vast forest, each unbeknownst of the other. When curiosity grips two students—one from each school—their dictatorial institutions double down on secrets.

Richard could do everything in his power to make the basement more comfortable for Warren, but in the end it would still be a basement. And the truth was, Richard had. He’d ordered the carpenters to swap out the carpet, hang better pictures on the walls, renovate the storage rooms, realign the shelves, and muffle the boiler, repaint the doors, install a new toilet. Hell, Richard had even sent him flowers. They stood now in murky water upon Warren’s writing desk, equidistant between Gordon and Warren, as the writer received his weekly earful on how to write a book from a man who certainly didn’t know how.

“Richard isn’t asking for anything from your soul, Warren. I think you know that.” Gordon wore his trademark fine suit. The way he sat half upon Warren’s desk drove him insane. “He’s not interested in the tangle of emotion and epiphany that no doubt swirls in your belly. To be brutally honest with you, Warren, he’s not interested in your artistry at all.”

Warren, hefty and sweating, standing beside his chair, tried to maintain a look of professional ambiguity. But it was hard. Gordon spoke to him on Richard’s behalf like he spoke to all the Parenthood staff: as if Warren Bratt, a.k.a. Lawrence Luxley, were a child. Younger somehow than even the boys. “If you ever find that you are blocked, just remind yourself that he’s not looking for the great American novel. He’s not even looking for the great Antarctic novel. He’s looking for a book. A bad book will do. In fact, a bad book will do better than a good one. You know this. You’ve written twenty-nine of them already.”

“Thank you, Gordon. Thank you very much.”

For a decade, Warren had considered these meetings to be the most difficult part of his job. But recently something much worse had come up.

The Guilts, he’d called it.

It was a dangerous emotion for a staff member of the Parenthood to experience. He could hardly admit to himself what it was for. But really, there was no hiding it, as the source operated above him in the many floors of the Turret, day in, day out.

Guilt, yes, for how they were raising these boys.

Shut up, Warren thought now, Gordon so close. He half- imagined an Inspector bringing a magnifying glass to his ear, proclaiming him unclean.

The feeling was only a splinter now, but not long ago it had only been a sliver.

Gordon smiled and Warren felt the familiar rush of rage in his chest, his blood, his bones. Gordon had a way of smiling that suggested you agreed with him in the end, no matter how ridiculous a thing he had proposed. And Warren, like the rest of the Parenthood, complied. Smiled back. Beyond the white door of Warren’s basement office, the subterranean halls of the Parenthood wound like catacombs. And while the boiler had been quieted some, Richard had no plans to turn down the volume of the Corner.

“What are you thinking for the next book?” The way Gordon asked it was nothing like Warren’s old pals, the Writing Gangsters, used to ask it at Don Don’s pub in Milwaukee. In those days, Warren’s equally idealistic cohorts had to blow their purple-dyed bangs from their eyes before they could look into his, usually flexing a tattoo or two for good measure. And if ever they asked after a book idea, it was with genuine artistic concern. Oh, how Warren Bratt missed his pretentious, holier-than-thou, degenerate former friends.

But those days were ten years past. And Warren’s gut wasn’t the only thing that had grown in that time. The Alphabet Boys were almost teenagers now. He’d watched them grow up in real time. Knowing what they knew. And what they didn’t.

“I’m not sure yet,” he said purposefully. It felt good to make the corporate suck-up squirm. Corner hum or not, once a punk always a poker, and Warren Bratt had to stick it to Gordon anytime he could. Of course he had an idea for the next book. He had one thousand ideas for the next one thousand books. Because Richard, the Alphabet Boys’ magnanimous D.A.D., wasn’t looking for, as Gordon just said, a work of art. Most decidedly not. Richard wanted supermarket slop. The kind of books that Warren’s aunts used to slurp up on the beaches of the Wisconsin Dells. The kind of books that showed half-naked men clutching half-naked women, their lust as clearly stated as their loins.

“Let’s do this,” Gordon began. Always an idea for the next book. Always similar to the last one. “Give us something about a man who washes windows.” He snapped his fingers. Warren knew very well where this was going. The plots of the leisure books were more formulaic than the romance novels he wished he was writing instead.

Has it come to that? Warren asked himself.

But no. Not quite that. And though Warren wasn’t able to ex- amine this feeling in whole, as Gordon sat staring at him from across his writing desk, he understood it was something like that. Something like wanting to write the worst thing he’d ever written, if only it meant not writing more of the same.

“Right now,” Gordon said. “Give the window washer a name.”

Warren didn’t have to think hard. He had a long list of trite masculine names.

“Great. Jerry it is. And what does Jerry do?”

“You said yourself he washes windows.”

“Where? What building?” Warren wanted to grab Gordon’s smug face by the perfectly shaved chin.

“How about the Turret.”

“So what happens in your next book? No women, of course.”

“We could all use a gentle reminder. The boys have reached the Delicate Years, after all. Their fresh needs will be . . . in the air. Let’s be careful what we breathe, Bratt.”

Warren felt cold fingers up and down his arms. What was Gordon actually after down here? Had Richard grown . . . paranoid? Was it possible that, after all this time, Richard had begun questioning the foundation of his darling experiment?

That’s all you, buddy, Warren thought. Alllll you.

“Stop it,” Warren said, not meaning to. The office lights exposed his thinning curly hair, anxious eyes behind his black-rimmed glasses, and a belly the Writing Gangsters would’ve thrown pencils at.

Oh, how he missed those friends.

“Tell me more about this window washer.”

Warren was glad for the return of the subject.

“Okay. One day, while washing the windows of the Turret—”

“Jerry sees a naked blonde bent over a writer’s desk.”

“Warren.” The temperature in Gordon’s eyes dropped to none.

“While washing the windows of the Turret, Jerry sees something curious happen inside one of the boys’ bedrooms.”

“He sees one of the boys cheating at Boats and—”

“Not Boats. Don’t want them analyzing that particular game. How about Panhandle?”

“This is very good.”

“—and first he finishes his job—”

“—and when he gets back down to the ground, he either goes to the head of the Parenthood and informs him of what he saw or he approaches the boy himself.”

Gordon frowned. The angles of his face worked in such accord that it looked, to Warren, as if he were a puppet made of Parenthood wood.

“Hmmm. The problem with approaching the boy himself is that we’d be empowering the window washer. As a profession.”

Warren brought a stubby hand to his collar. He tugged on it. It always felt as if the temperature in the office increased incrementally for the duration of his meetings with Gordon. This story (Warren had a hard time calling it a story, calling it anything other than propaganda) was no different from any other leisure book he had written. Yet Gordon nitpicked.

An editor in hell, Warren thought. But it wasn’t funny. And when did jokes like these cease to be funny? When had Warren started feeling this way? Hadn’t he bought in, years ago, when they paid him his first check?

“The boys are young enough that they’ll eventually substitute window washing with the fields of study Richard’s hoping they’re drawn to. For Christ’s sake, Gordon. Do they have a choice?”

Gordon clucked his tongue. Warren stopped talking. He knew he’d come close to saying something he shouldn’t have. A statement like that might reveal the Guilts.

“We’re not raising the right thing to do, Warren. We’re raising the most enlightened, undistracted minds in the history of mankind.”

From INSPECTION. Used with the permission of the publisher, Del Ray. Copyright © 2019 by Josh Malerman.

It's Time to Discover the Crime Fiction of Helsinki 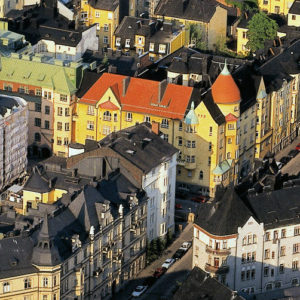 It's Time to Discover the Crime Fiction of Helsinki Finland hasn’t had quite the Scandi-Noir fuss made over it as either Sweden or Denmark. While bookshop shelves the world...
© LitHub
Back to top