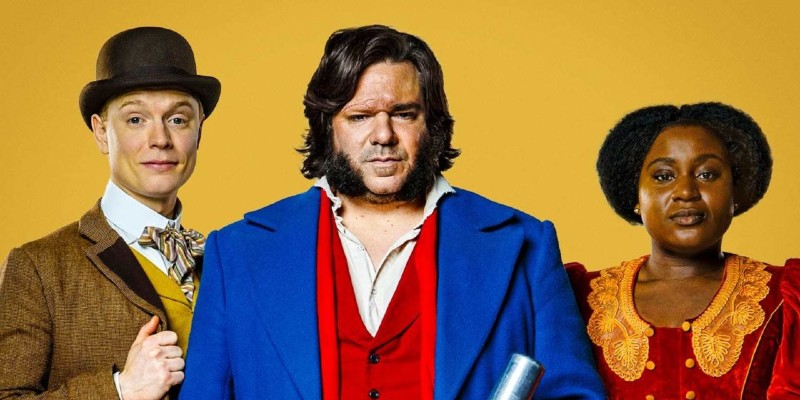 London, 1887.  Detective Inspector Rabbit (Matt Berry) is hauled in by his superior, Chief Inspector Wisbech (Alun Armstrong), who reads him a note received from a school child:

“Dear Inspector Rabbit, your visit [to my school] yesterday really inspired me. When I grow up I want to kick wrong-uns in the bollocks, then string the wankers up.” It’s signed, “Lily, age 9.”

While Rabbit gets a dressing down, Wisbech’s daughter, Mabel (Susan Wokoma), bursts in. “Father, you forgot your sandwiches, and uh, did I get the job?”

“When you adopted me you said you wanted the best for me.”

“I was mainly talking about hats.”

“If a woman can be a nurse or a novelist,” Mabel argues, “then why can’t she find the stolen jewels or drown a nonce because a trial’s too good for him?”

Wisbech waffles on his answer. “Because it’s never been done and for other… socio-economic reasons.”

Mabel isn’t about to take this lying down. “The only opportunity for a young woman in this field,” she says, “is Strangled Girl in Fog. I’m aimin’ higher. I’m going to be the first female copper, or fopper.. or lady filth… or…”

Sergeant Wilbur Strauss (Freddie Fox), top of his year in criminology at Cambridge, introduces himself, and Mabel replies without missing a beat. “Fuck off.”

Channel 4/IFC’s Year of the Rabbit offers many pleasures: its no-holds-barred sense of humor; its atmospheric, cheeky re-creation of London (an urchin sells “London Fog” in a jar, the police promote slogans like “Working Together for A Safer City,” an international group of women villains that includes a Bulgarian princess pretends to be interested in prison reform). It also features deliciously flamboyant secondary characters like David Merrick/The Elephant Man; and superb performances by the leads—Berry, Fox and Wokoma. But what made Year of the Rabbit feel groundbreaking and revelatory from the moment I watched it on a small screen on a British Airways flight last fall is the way in which the series handles race. Mabel isn’t just a woman who wants to become a “fopper;” she’s a Black woman in Victorian London. And yet, apart from that one mention—“when you adopted me”—spoken to her white father in the opening few minutes of the first episode, and one other quick instance in the second episode, the show doesn’t refer to Mabel’s race at all.

Instead, Black characters pop up quite naturally in the East End where most of the action takes place. On his way to the police station, Rabbit passes by a Black newspaper vendor who’s hawking the latest murder stories, “Fuckin’ pictures and everythin’.” Later, when Rabbit and Strauss investigate a body that’s been pulled out of the river, the crowd gathered around includes Black and white faces. There’s a black preacher and other black and South Asian members of London’s police with speaking parts. We’re supposed to see these people and register their presence, and the show provides no explanation for all these characters of color who go about their lives just like everyone else, and aren’t enslaved or servants or only lowlifes, thugs or “Strangled Girl in Fog.”

Of course, it shouldn’t have to. For those like me who are unfamiliar with this history, a little digging quickly reveals that there were indeed all sorts of Black Victorians in London engaged in a variety of activities, particularly in the East End, just as there were people of all different races, religions, and ethnic backgrounds living and going about their business in the capital of the British Empire. And presumably, attitudes towards people of color weren’t invariably and only hostile and racist. See for instance: Black Chronicles II, an exhibition of photographs of Blacks in Britain that goes back to the 1830s; Black London: Life Before Emancipation by Gretchen Holbrook Gerzina and Black Victorians, Black Victoriana edited by Gerzina; Black Tudors: The Untold Story by Miranda Kaufmann; and Black and British, the BBC series by historian David Olusuga that explores the presence of Blacks in Britain going back to Roman times.

Yet, despite being a fan of British period drama, except in instances where race is the focus of the story, as in Belle (2013)or Victoria or Abdul (2017) or the sub-plot in Downton Abbey in which Rose falls in love with a Black jazz musician, I don’t recall seeing characters of color in period dramas acting as if they had every right to be there just like the white characters—and that’s exactly what Mabel does as she swears with the best of them and chases down the bad guys.

Year of The Rabbit producer Hannah Mackay explained, “The East End and docklands—that location was probably the most diverse in England. There was a Caribbean presence, a Jewish presence, there was Chinatown… Britain produces all kinds of period dramas, and those dramas have been so white for so long that we’ve begun to believe that the world was like that… We’ve come to confuse the past as it actually was with the past in period dramas.” 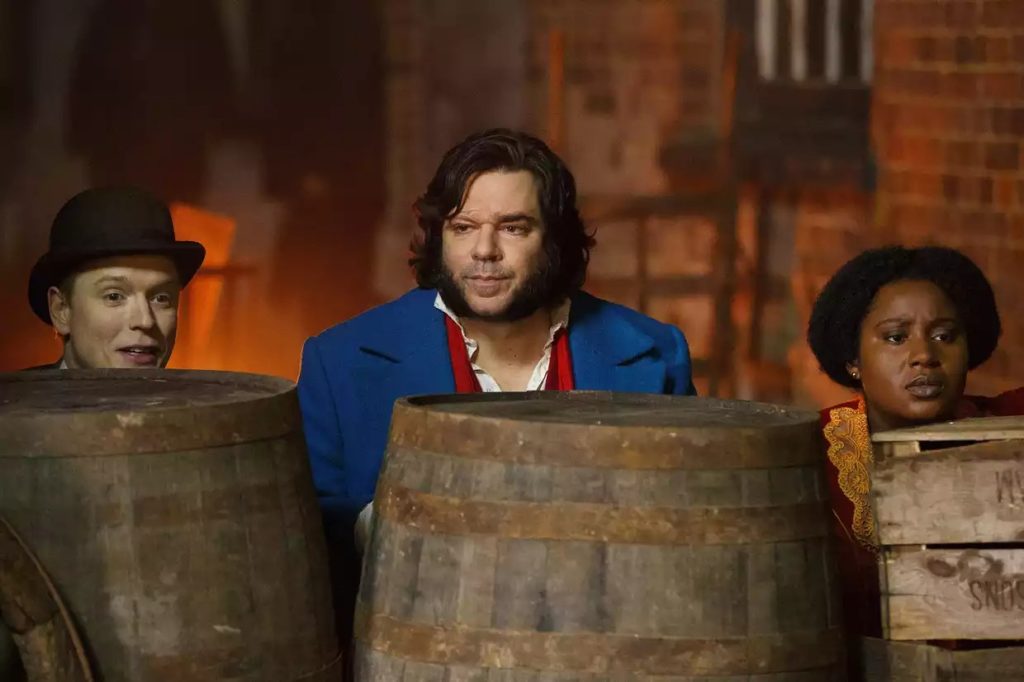 Her words are echoed by David Oyelowo who stars in the PBS/BBC adaption of Les Miserables: “The excuse has been used that it’s not historically accurate, and that’s just not true. If you are an actual genuine student of history… you’d know that people of color have been in France, in the UK, all over Europe, for centuries, and not just as slaves… [H]aving grown up in the UK, and more specifically, on period drama, I had just resigned myself to the fact that, ‘Okay, those amazing shows are going to be shows I love, but they’re never going to have folks like me in it.”

Race is so boldly handled in Year Of the Rabbit—you can’t miss it since Mabel is one of the three main characters. However because her race goes largely unmentioned, both in the show and reviews, I began to wonder whether viewers were supposed to see Mabel as a strong Black woman who wants to be a cop in Victorian England, or whether she and the other characters of color were instead examples of color-blind casting.

In an interview on Today in Focus, Armando Ianucci explains the practice in the context of his decision to cast Dev Patel in the lead role in his adaptation of Charles Dickens’s David Copperfield. “There was a brief moment when you think, so okay, do you rewrite it to say [David’s] father was Indian… I thought no, I just want to cast people the same way I cast David, which is just find the right person for the part.  And if we are going to be making an industry out of doing period pieces and so on, I think we have to make a case now for saying, we can’t do it the way it’s always been done… I want to cast from a hundred percent of the acting community available to me.”

Year of the Rabbit takes a different approach.  “The reason we did put the line in [about Mabel being adopted],” Mackay said, “is because her series arc is her being prohibited from the police because she’s a woman. To talk about [Mabel] as a woman without talking about her race felt intellectually dishonest. We didn’t want to dwell on it [but did want to show that we had] knowingly done it…” In addition, Mackay said, “I think it’s important that actors of color feel that they don’t have to tell stories that only have to do with race.”

For me, as an immigrant from India and writer of historical fiction, that’s an incredibly important, often overlooked, and empowering point. It expands the kinds of characters of color who can exist in period stories.  Just as a white cop in a period show doesn’t have to endlessly discuss, think about or talk about being white, a Black cop doesn’t have to either. She can simply be a copper, or a fopper, or a lady filth… the options are endless.

The only other moment in which Year of the Rabbit takes up Mabel’s race occurs in the second episode.  Mabel’s on duty demonstrating how to prevent bicycle theft when a man approaches her.  “How come they let one of you lot in the police?”

“Well, women do a lot of things now.”

“That’s not what I meant,” he replies with a smirk.

“I’m going to count to two,” Mabel says, “and then you’re going to fuck right off, or I’ll show you just how police I can be.” When he doesn’t, she chases him down, whacks him with an iron chain, and proceeds to choke him, saying, “Not so chatty now, you racist shit.”

What I found fascinating while looking into this is how much our perceptions of the past are shaped by period dramas and how often people of color remain invisible even in archives where their images are housed. A co-curator of the Black Chronicles photography exhibition points out that, “The Hulton Archive, where [the images] came from, did not even know they existed until we uncovered them while excavating their archive as part of our research project.”

The effects of “un-whitewashing” aren’t limited to the world of British period dramas. Inasmuch as British period pieces are consumed avidly around the globe, and especially in the US, un-whitewashing challenges and fundamentally alters our understanding what the past was really like by enabling a proliferation of different sorts of characters of color. When characters heretofore considered “impossible” are brought into existence in all their diversity of experiences, aspirations, temperaments and abilities, it is empowering for everyone and particularly for writers, actors and viewers of color. Un-whitewashing the past also expands the notion of who we are today by making it increasingly difficult to maintain a nostalgic view of a “simpler” time when everyone “knew their place,” and to use this imagined reality to justify a narrow idea of authentic British or American identity.

The Real Life Crimes Behind Ida Lupino's The Hitch-Hiker 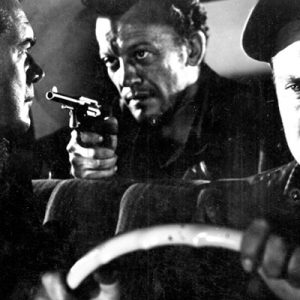 The Real Life Crimes Behind Ida Lupino's The Hitch-Hiker

Though she appeared in nearly five dozen films and scores of TV shows in the course of her forty-eight-year acting career,...
© LitHub
Back to top