Josephine Tey: A Crime Reader's Guide to the Classics

In 1990, the UK Crime Writers’ Association issued a list titled “The Top 100 Crime Novels of All Time.” Number one on the list was The Daughter of Time by Josephine Tey. It was a good call then, it’d still be a good call now.

Tey’s hero, however, the slight, dapper Alan Grant, who featured in six of the eight books (the other two were stand-alones), was an unassuming Scotland Yard Detective Inspector, a shrewd observer of people who solved his cases with intelligence, doggedness, and careful attention to detail, even when, in the case of The Daughter of Time, he spent the entire book flat on his back in a hospital bed. In A Shilling for Candles, Tey even had a frustrated Grant moan about his shortcomings: “He wished he was one of these marvelous creatures of super-instinct and infallible judgment who adorned the pages of detective stories, and not just a hard-working, well-meaning, ordinarily intelligent Detective Inspector.”

Besides that, more than puzzles, Tey was keenly interested in exploring the psychology of her characters, and the darker side of humanity. She was fascinated with masks, imposters, and identities; those who put on a public face directly contradictory to their true natures; those whose words and actions twisted truth all out of recognition. How did they come to be that way? How did they affect those around them? These questions opened the door wider to many of the subjects filling crime fiction today.

In addition, Alan Grant had no interest in romantic entanglements, except for one passing episode in the final book, The Singing Sands. He was good friends with an actress named Marta Hallard, but it was strictly platonic, and Grant was vocal about his disinterest in marriage as a whole. In this, he echoed his creator, who remained single all her life. A couple of possible male relationships have been mentioned, but their depth can not be verified. Similarly, there has been speculation about Tey’s sexuality, and Grant’s, but again, the truth about them both remains as hazy as much else about the author’s life.

Josephine Tey was always an enigma. Born Elizabeth Mackintosh in 1896, she avoided the press, shunned most photographs, never granted interviews, and had only a small circle of friends. After years as a teacher, she returned home to Inverness, Scotland, to look after her dying mother and then to keep house for her father, and it was then, in her late twenties, that she began working as a writer—but not as Elizabeth Mackintosh or Josephine Tey. Under the name Gordon Daviot, she poured out fiction, nonfiction, and many plays, four of which were produced, including one, Richard of Bordeaux, which make a name for its young leading man and director, John Gielgud. Even Tey’s first Alan Grant novel, The Man in the Queue, was published under the name of Gordon Daviot when she entered it in a competition in 1929. After that, she didn’t write crime fiction again until 1936 (A Shilling for Candles) and it wasn’t until 1946 that she began a burst of creativity that produced the other six crime novels, one of which, The Singing Sands, was found in her papers and published posthumously.

She died as she lived, privately, on her own terms, in 1952 at the age of fifty-five. Mortally ill with liver cancer, she told none of her friends, and most of them were even unaware that she was sick. Gielgud himself says he was shocked to read her obituary when it ran in The Times.

It appeared under the name of Gordon Daviot, with no mention of Elizabeth Mackintosh or Josephine Tey. 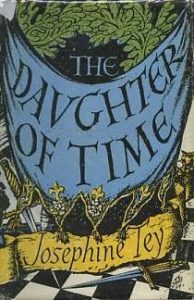 One of the great delights of reading Tey is her prose. It is light, witty, smart, filled with acute insights. Like her hero Grant, she was a great observer of people, and it shows in even the smallest of her characters. And, like Grant, she liked to question everything. Nowhere is all that more apparent than in her masterpiece, The Daughter of Time.

Grant is in a hospital bed with a broken leg, bored out of his mind and unable to stomach the insipid novels being pressed upon him, including The Case of the Missing Tin-Opener, in which he spots “three errors of procedure in the first two pages.” His friend Marta Hallard, knowing his interest in faces, brings him some portraits to study. One in particular intrigues him, a face full of conscience and integrity that he discovers to his shock is Richard III, famed in Shakespeare as the hunchbacked monster who killed his two young nephews in order to assume the throne.

But those deeds don’t match up to that face, and, his interest piqued, he starts to read more about Richard III, digging into an available children’s book first, then, with the help of a researcher, into works by Tudor-era historians and primary sources. All the while, he applies his policeman’s eye, his instincts for when the facts don’t add up or seem tainted, even in the case of the sainted Sir Thomas More: “Grant had dealt too long with the human intelligence to accept as truth someone’s report of someone’s report of what that someone remembered to have seen or been told.”

He finally concludes—I’m sure I’m giving nothing away here—that it was all a massive put-up job, a hijacking of history. What makes the book so extraordinarily successful is not only Grant’s detective work while immobile, but the way Tey is able to take such material and make it into a thriller, full of twists, turns, and revelations. It is a masterwork both of crime fiction and historical analysis, and kickstarted the wave of books and studies that has produced a very different picture of Richard III today. 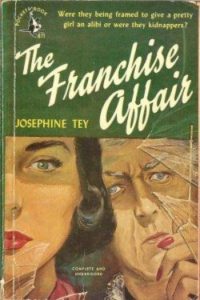 That “Top 100 Crime Novels of All Time” I mentioned? This book came in at number eleven. Noone is murdered in it. Alan Grant makes only a brief appearance. But as a portrait of a young psychopath, it is completely gripping and entirely modern.

A stodgy country solicitor named Robert Blair has his world turned upside down when a local woman telephones him for help. She and her grown daughter have been accused of heinous crimes. A fifteen-year-old girl named Betty Kane claims that they abducted her, imprisoned her in their attic, starved her, and beat her black and blue.

The readers’ sympathies are with the accused, but the girl is so convincing and so detailed. She’s clearly been beaten, and she knows everything about the house. Could she really be making all this up? Why on earth would she? Tey keeps the suspense constant as to what happened and why and what happens next, and keeps some surprises up her sleeve even up to the last page.

As with The Daughter of Time, this book is also based on an historical case, that of a young woman named Elizabeth Canning who, in 1753, vanished from her home and reappeared four weeks later with a story of being kidnapped, imprisoned, and starved by an old woman. The case became a sensation, dividing the nation as to guilt or innocence. However, there is no doubt where Josephine Tey’s sympathies lay. 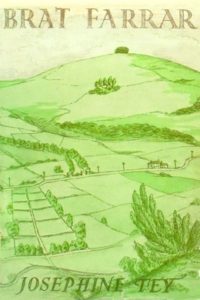 This is a stand-alone—no Alan Grant to be found, even in passing. But in the title character, we have one of the most fascinating imposters in crime fiction.

We meet him very early, when a second-rate actor named Alec Loding stops him on a London street—“I act in a bad part in a bad farce at that very bad theatre over there”—and tells him he looks astonishingly like someone he’d known back home who’d disappeared eight years ago, at the age of twelve. What makes this interesting: If that boy were around, he’d be about to inherit a considerable estate. Instead, it will go to his twin brother, unless….

Two weeks later, the imposter, extensively coached by Loding, turns up in the village and immediately starts charming the pants off everybody, mixing enough fact and fiction to convince even the most skeptical observer. But there’s a good deal more to Brat Farrar than there appears to be, including his capacity to surprise. Josephine Tey pulls off a tour de force of character and plotting that’ll have you guessing to the end.

Because Josephine Tey led such a private life, yet left such an indelible impression, she also lives in a series of novels by Nicola Upson, in which Tey appears as both the heroine and the detective. I haven’t read any of them, but from what I’ve seen, they’re worth checking out in their own right.

In 1951, Frederic Dannay, half of the team that was Ellery Queen, wrote to Tey, asking if she could write something for Ellery Queen’s Mystery Magazine, apparently about her fellow writers. This was her reply:

Shall I tell you a secret?

I read hardly any fiction at all.

I write my own stories for fun, the way other people play golf or do tatting (what is tatting?), and forget about them in between times.

Neil Nyren retired at the end of 2017 as the evp, associate publisher, and editor in chief of G.P. Putnam’s Sons, and is the winner of the 2017 Ellery Queen Award. He is a columnist and contributor for BookTrib, The Big Thrill, and The Third Degree, as well as editor-at-large for CrimeReads. 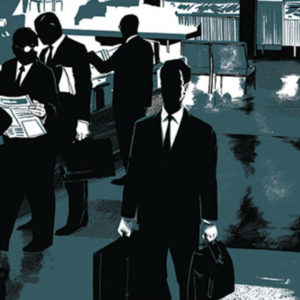 When The Spy Who Came in from the Cold was first published in September 1963, David John Moore Cornwell, better known to the world...
© LitHub
Back to top