Karyn Kay: A Life and Death in New York City

For her students at LaGuardia High School, Karyn Kay was a memorable figure who brought love and passion into the classroom. Outside, life with her son was getting much darker.

On the morning of Tuesday, April 10, 2012, 63-year-old single mother Karyn Kay called 9-1-1. Her 19-year-old son, Henry Wachtel, was having a grand mal seizure. Neighbors later told police they heard sounds of struggle, Henry screaming “I’m sorry mommy!” over and over, then nothing.

In the 1980s, after finding some success with her own writing (including three books about film, several episodes of America’s Most Wanted, and the screenplay for the 1988 thriller, Call Me,) Karyn Kay discovered her calling as Creative Writing teacher at New York City’s public performing arts high school, LaGuardia.

A kooky, dark-lipsticked sprite of a woman, Ms. Kay danced, laughed loudly, freely dispensed hugs and “snaps” for spirited poetry readings—the kind of teacher that made countless students feel like they were her favorite, me included.

When it became clear that literature and writing mattered more to me than almost anything else, Ms. Kay asked my favorite book. I told her it was Jonathan Lethem’s Fortress of Solitude. His portrayal of a New York City adolescence in the late 20th century was the first book I’d ever read to ring that bell of recognition—that shock to the system we’ve all experienced—when, reading a book, we see portrayed a thought or sensation that, until that very moment, we’d assumed was known to us and us alone. It was magic. Ms. Kay lit up. Not only had Lethem attended LaGuardia, but she knew him.

Before long, Lethem was sitting at the front of our class. It was the first time I’d ever met an author in the flesh. Suddenly, a writing life seemed, not just real, but possible. I remember the pride on Ms. Kay’s face when she introduced us.

Alongside love and passion, Ms. Kay brought struggle and pain with her into the classroom. She was raising her son, Henry alone. That the relationship was fraught was no secret; it wasn’t unusual for her to sulk behind her desk, despondent after an especially bad fight. Still, even after the day she arrived at school with a nasty black eye, I don’t think any of us fully grasped her situation. She’d blamed herself for instigating, assured us that Henry was a good kid.

Not a year before arriving on Ms. Kay’s doorstep, I had watched my dad lose a long, ugly battle with cancer and my mom disappear down a bottle. The experience left me jaded and skeptical, dismissive of my peers who simply couldn’t relate. Writing poetry for Ms. Kay granted me the one safe venue I had for expressing unfiltered rage and confusion.

But naive and grief-addled as I was, Ms. Kay’s near-constant, emphatic attention embarrassed me. I grew contemptuous of her kookiness, dismissive when she tried too hard to elicit love.

One day she held me up after class, buried her head in my chest, and cried, begging me to tell her that she wasn’t a bad mother. I remember how tiny and light she was. I can only speculate, but she must have seen us as compliments; the grieving son and the dejected mother. She must have just wanted an embrace, some warmth. Instead, I told her it wasn’t fair to ask me that and walked away.

Six years later in 2012, I was a year out from college graduation as Ms. Kay’s son, Henry began his first year at Fordham. A talented actor, Henry had starred in a well-received short film based on his life. From the outside, the future held promise.

But if things had been bad between Henry and his mom in 2006, they had only deteriorated as he grew into a young adult.

While I’m normally skeptical of the idea that teenage drug use predicts future behavior, Henry partied a lot, using drugs despite—perhaps because of—ongoing battles with epilepsy, depression, and bipolar disorder. It was also around this time that he began a regular martial arts practice. This all proved a volatile cocktail in the unstable young man; indeed, neighbors in Ms. Kay’s Hell’s Kitchen apartment building would later testify that they frequently overheard mother and son arguing through the walls.

Compounding his already erratic and violent tendencies, by 2012 Henry was treating his epilepsy with the drug Keppra, found to cause rage in a small number of patients.

All of which brings us back to the morning of April 10th.

A recording of the 911 call later played at the trial captures the entire disturbing ordeal: a desperate Karyn Kay defies the emergency operator’s directive to stand away from her son as he seizes. Henry emerges from his episode, apparently in a state of psychosis. He begins attacking his mother. She drops the phone, pleading for help. When the sounds of violence end, Henry can be heard begging his mother not to die.

As he was led away in handcuffs, neighbors said he wailed, “What did I do?” and “I didn’t mean it,” and “mommy, I love you.”

Karyn Kay died a few short hours later, bludgeoned to death by the bare hands of her only child. She was 63 years old.

As he was led away from the courtroom, charged with second-degree murder and remanded to Riker’s without bail, Henry Wachtel was heard saying, “I need a hug.” He claimed no memory of the murder but admitted responsibility, eventually entering a plea of not guilty by reason of mental disease or defect. After accepting his plea Justice Jill Konviser, told the then 21-year-old Henry that he would be “confined in a secure facility for what could be the rest of [his] life.”

Which, it seems, is exactly what’s happening.

Since the trial, Wachtel has appealed for release but has been denied twice, most recently in November of 2020, when NY’s Supreme court cited continued substance abuse and Wachtel’s potential for violence. Whether he is truly at fault for his actions remains unsettled, and opinions abound. I see no easy or neat answer.

What’s beyond question is that this tragedy consumed more than one life.

Karyn Kay’s favorite book was Tim O’Brien’s The Things They Carried, a collection of auto-fiction short stories as much about the cost of violence as the alchemy whereby memory is transmuted into story. “What stories can do, I guess, is make things present.” O’Brien writes. “I can look at things I never looked at. I can attach faces to grief and love and pity and God. I can be brave. I can make myself feel again.”

When I think about the day Ms. Kay cried to me in the hallway, I don’t believe acting differently would’ve changed anything, I just wish I’d been able to see the mother aching for a son’s love. Giving that to her would’ve cost me nothing.

Maybe, in telling this story, I can more fully embody the person Ms. Kay had wished me to be. Maybe through writing, I can alchemize my wish and my regret and my perspective and make that angry teenager wrap his arms around Ms. Kay, tell her that she was indeed a good mother to all of us who needed her, whether we knew it then or not; that I will carry her with me, always.

Julien Levy is a writer from New York City. His nonfiction has been featured in Thrillist, Vice, and Noisey. His fiction has appeared in Flash Frontier, The Corvus Review, and Last Podcast on the Left. He currently lives in Brooklyn. 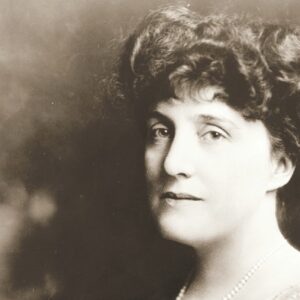 If ever a novel could evoke a simpler, gentler time, it is Mary Roberts Rinehart’s The Wall, written at the peak of her powers...
© LitHub
Back to top