Welcome to Lagos—Nigeria’s city by the lagoon. Lagos is one of Africa’s richest cities, but with pockets of the continent’s most violent and gang-ridden suburbs. It is sprawling, fast growing on opportunities—licit and illicit—in oil, commodities trading and port services. Lagos is a banking and tech hub for Nigeria and all West Africa with at least 16 million, and maybe as many as twenty million, inhabitants. You could be forgiven for thinking Lagos is Nigeria’s capital—it’s the quintessential city of movers and shakers. But it’s not—in 1991 they moved the capital to Abuja, just about in the dead centre of Nigeria. But that small detail didn’t slow Lagos down too much. Frenetic doesn’t even start to describe the vibe of the city. It’s also where some of the African continent’s best crime writing is emerging from.

A good starting point is with the ever reliable “Noir” series from Akashic Books. Each city’s volume is usually produced with the help of a local, eyes on the ground, publisher who knows their way round the city’s crime writing scene. In the case of Lagos Noir (2018) it’s Abuja’s Cassava Republic Press. Lagos Noir is a volume encompassing a lot of Lagosian crime writing talent including NNedi Okorafor, Chuke Unigwe, Jude Dibia, A. Igoni Barrett, and many others. And it was edited by one of the most respected Nigerian writers, of both crime and non-crime novels and poetry collections, Chris Abani.

When he was sixteen, in the mid-1980s, Chris Abani wrote a political thriller called Masters of the Board (1985). It got him a six-month jail sentence for being a little too close to a recent political coup in Nigeria and putting him on the wrong side of some powerful people. Another novel, Sirocco (1987) got him a further year in jail. After that he decided to lie low in the UK and the US for a while, but has kept on writing and publishing both poetry and prose. Abani’s writing nowadays is not always strictly crime but does often reveal the underbelly of Lagos society. Graceland (2004) is about a teenage Elvis impersonator hoping to make his way out of the Lagos ghetto. Becoming Abigail (2006) is the story of tough and fiercely independent Abigail,  brought as a teenager to London from Nigeria by relatives who attempt to force her into prostitution.

Toni Kan (Anthony Kan Onwordi) started out publishing short stories with Cassava Republic. His most recent novel, The Carnivorous City (2016) is a tour-de-force journey seen through the naïve eyes of the migrant from the Nigerian countryside as he encounters the big city. Rabato Sabato, aka Soni Dike, is a Lagos big boy; a criminal turned grandee, with a beautiful wife, a seaside mansion and a questionable fortune. He’s living the Lagos high life. Then he disappears and his brother Abel Dike, a simple rural school teacher, has to come to the city to try and find him. What Abel finds is gangsters, ghetto bosses and bent cops between him and his estranged brother.

Leye Adenle is a contemporary of Kan’s—a Nigerian crime fiction writer and actor now living in London. In his first novel, Easy Motion Tourist (2016), Adenle introduced the dark side of Lagos via his character Guy Collins, a know-nothing British journalist abroad. Collins stumbles across the case of a prostitute’s mutilated body. The whole book is then a nightmarish crawl through Lagos’s super dark side (nasty, violent and, thanks to the frequent power cuts, literally dark most nights). Easy Motion Tourist is unrelenting in its portrayal of underworld Lagos—‚cops who jump at the opportunity to torture suspects and then dispense summary justice; party girls and prostitutes abused, robbed and murdered; dealers in body parts for ritual ceremonies; carjackers, assassins, gangs, hustlers, bent cops, and corrupt politicians, bankers, businessmen. By the end you’ll be exhausted, but know the seamy side of Lagos pretty well.

Adenle’s follow up to Easy Motion Tourist is When Trouble Sleeps (2018) with more gangsters and corrupt Lagos politicians and, once again, featuring the character of Amaka—a sassy, sexy, smart as a whip crusader against prostitution and abuse whose campaigns encompass all the elements of Adenle’s Lagos. Both Leye Adenle and Toni Kan sprinkle their novels with Lagos pidgin, combining English with slang and local dialects (and in Lagos that’s particularly Yoruba).

The Nigerian diaspora is an important component of the Lagos writing scene now, with many writers based for political, educational or economic reasons in the UK, the US or Europe. Now resident in the USA, Teju Cole’s work often harks back to Lagos—2007’s Every Day is for the Thief is a striking portrait of Nigeria in change and features a crime or two (for instance a very charming story about being duped buying fuel). UK-Nigerian Oyinkan Braithwaite had a massive hit in 2019 with My Sister, The Serial Killer. Braithwaite was born in Lagos and spent her childhood between Lagos and London. My Sister, The Serial Killer is a dark and comic tale set in middle class Lagos where Korede suddenly realizes that her sister, who appears at first glance to have it all – the looks, the boyfriends, the popularity— is not all she seems. When your sister needs you to help dispose of her boyfriend’s body what are you gonna do! But when your murderous sister starts taking an interest in a guy you like and looks like she might be about to go on another killing spree what do you do then?

Nigerian-born Chike Unigwe’s On Black Sisters’ Street (2011) is actually set in Brussels among a group of African women who have either made their own way, or been trafficked, to Europe to work as prostitutes. The murder of one of their number brings them together to find the killer.

You’ve probably had a 419 email at some point. You’re promised a lot of money by some kind of Nigerian prince or exiled politician if you reply with your bank details and maybe some cash to facilitate the promise that a lot more will come back your way. It doesn’t of course, but the scam must work as it’s gone on for so long. That email most probably came from Lagos, the home of the 419 industry. I Do Not Come To You By Chance (2010) by Adaobi Tricia Nwaubani is that world. But it’s a hilariously funny crime novel featuring strait-laced engineering graduate Kingsley who, finding himself in a Nigeria where good jobs are scarce, goes to work for “Cash Daddy” and the Yahoo Boys.

At Crime and the City we always like to recommend novels that haven’t traditionally been shelved as crime, but could be. Chioge Obioma’s The Fishermen (2015) is one such book. It’s Nigeria in the mid-1990’s and four brothers encounter a madman whose mystic prophecy of violence threatens the core of their close-knit family. Told from the point of view of a nine-year-old boy caught up in a cycle of murder and distrust set against the backdrop of a small Nigerian village where men must leave and go to Lagos to find work and money. Obioma is an amazing writer and it was little surprise when The Fishermen was nominated for the Booker Prize.

There are other centers of African crime writing of course—certainly to the north of Nigeria in Morocco and Algeria, as well as in other sub-Saharan nations, notably South Africa. But Nigeria, and especially Lagos, is, at this moment in time anyway, the continent’s most active Capital of Noir. 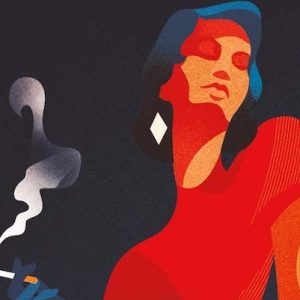 Another week, another batch of books for your TBR pile. Happy reading, folks. * Alexandra Burt, The Shadow Garden (Berkley) “Alexandra...
© LitHub
Back to top