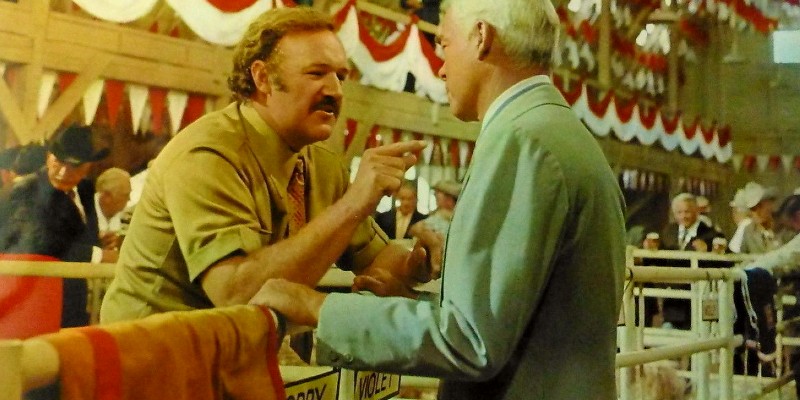 Prime Cut was a movie filled with stars – and violent, grotesque meat metaphors. Also, it was a mirror for the decade's American experience.

Want to talk about one of the strangest, if not the strangest American crime film to emerge in the first half of the 1970s? Then, let’s talk about Michael Ritchie’s neo-noir Prime Cut, as it turns fifty this year. It would be going too far to describe it as a neglected classic, but it is a fascinating film about a divided America that, as a result, finds obvious echoes today. Prime Cut’s at times surreal nature is signalled in the opening credits. To a Lalo Schifrin score, deliberately engineered to sound like calming elevator muzak, we follow a cow being slaughtered and fed into the mechanised process of creating hot dogs. At some point, one of the male workers adds what is obviously a human body into the mix. He calmly times the procedure on his wristwatch, pausing the process presumably at the point when the human meat has been made into sausage links. Taking the link of sausages, he wraps them in butcher paper and postmarks them to an address in Chicago.

The meat processing factory belongs to Mary Ann (Gene Hackman), a Kansas City crime lord who uses the operation as a front to traffic narcotics and women. The poor unfortunate who ended up as sausage links is the latest debt collector sent to retrieve half a million dollars Mary Ann owes the Chicago Irish mob. Mob boss Jake (a cameo by real life former New York police detective turned character actor Eddie Egan) turns to professional enforcer, Nick Devlin, played by Lee Marvin, to retrieve the debt. Devlin collects a couple of Irish hoods as backup, and with his faithful driver cum Man Friday, Shay (Bill Morey), they leave the bright lights of Chicago and drive to Missouri.

Although the story doesn’t directly spell it out, Kansas City is Devlin’s old stomping ground. First stop is a decrepit flop house where he beats up the individual responsible for feeding the previous debt collector into the mincing machine, Mary Ann’s brutish brother ‘Weenie’, so named because of his habit of always chewing on hot dogs. Next, Devlin and his men visit Mary Ann’s ranch, where he is having a “cattle auction”, the cattle a euphemism for naked doped up women laying amidst hay bales in pens, being ogled by male buyers. “Cow flesh, girl flesh, it’s all the same to me. What they’re buying, I’m selling,” Mary Ann tells a visibly disgusted Devlin. Devlin arranges to meet Mary Ann at a local fair the next day to collect the money owed to the Chicago mob, leaving with one of the doped-up women, Poppy, the first big screen role of a young Sissy Spacek.

Comparisons between Devlin and Marvin’s earlier screen incarnation of Parker in John Boorman’s 1967 classic, Point Blank, are unavoidable. Marvin imbues Devlin with a similar taciturn yet driven male energy. But in Prime Cut his performance is leavened with deadpan humour, a constant and very palpable sense of bemusement at finding himself so out of place. While the film generally avoids talking down to its rural setting, it nonetheless portrays aspects of it as a nightmare version of American gothic. Mary Ann’s operation is protected by blonde, almost Aryan looking young males, clad in denim dungarees, and armed with pitchforks. The pimp, who, of course, has no intention of paying back the money tries to give the enforcer a suitcase full of bloody offal (a variation of the usual bill sized pieces of blank paper typically used in crime film fake money handovers). The interaction descends into a bloody gunfight, in full view of local law enforcement who, obviously on Mary Ann’s payroll, calmly watch the carnage without intervening, culminating in Devlin and Poppy being chased through a wheat field by a giant combine harvester, a nod to Cary Grant fleeing a crop duster in Hitchcock’s 1959 classic, North by Northwest.

Prime Cut formed part of Ritchie’s varied directorial career, the best-known films of which included The Candidate (1972), The Bad News Bears (1976), the 1980 Bette Midler documentary, Divine Madness, and the 1985 Chevy Chase comedy, Fletch. He also helmed several lesser-known efforts, the best of which for my money, and a film that has some thematic similarities to Prime Cut, is Diggstown (1992). It stars James Woods as a confidence trickster who teams up with an aging black boxer (Louis Gossett Jr) to take down a small-town crime boss (Bruce Dern). Prime Cut was written by Robert Dillon, whose handful of credits started with a firecracker of a B noir for ex-communist cinematic polyglot Irving Lerner, City of Fear, in 1959, and peaked with his screenplay for John Frankenheimer’s highly underrated French Connection II in 1975.

The role of Mary Ann was a strange choice for Hackman, coming as it does off the back of his successful turn as Popeye Doyle in The French Connection. Angela Tompkins plays Mary Ann’s scheming trophy wife Clarabelle (another obvious semantic link between animal and female flesh). But Marvin carries the story. The film fits into what the star’s biographer, Dwayne Epstein, describes as the way that violence was central to how the cinema going public viewed him. Marvin’s persona, Epstein writes, ‘cemented the most purposeful and consistent portrayal of man’s violent and primal inner demons in the history of modern cinema’. While not all of Marvin’s roles involved violent characters, most of the memorable ones did. Violence characterised Marvin’s screen persona from the time he threw hot coffee in Gloria Grahame’s face in The Big Heat (1953), The Man Who Shot Liberty Valance (1962), Don Siegal’s The Killers (1964), Point Blank, and of course The Dirty Dozen (1967), in which he leads a group of US army criminals on a mission behind enemy lines to massacre German officers on R and R in a French chateau cum whorehouse. Marvin had fought in World War II, culminating in being wounded in the charnel house that was the battle for Saipan, and, as Epstein points out, he could act out a realistic fight scene and usually knew more about the military props and weapons than the technical people working on the film.

Prime Cut hardly rates a mention in Donald Zec’s Marvin: The Story of Lee Marvin and gets short shrift in Epstein’s bio of the actor. Marvin would later describe the film as a mistake; according to Epstein, he intensely disliked Ritchie and the two constantly feuded, particularly over the star’s refusal to follow the script’s depiction of Devlin’s relationship with Poppy as sexual. The fact that Marvin was on the right side of that argument can be seen in Prime Cut’s most bizarre scene, and one of strangest scenes in mainstream American cinema generally in the period, when Devlin takes Poppy to dinner in a fancy hotel restaurant. Braless in a transparent green dress, Poppy’s semi nakedness literally stops everyone in the restaurant in their tracks. But the scene, which could have been part of yet another in a long line of age-inappropriate male/female movie relationships, is turned into an almost tender sequence as she happily eats while Devlin create a safe space of sorts as he quietly stares down the men ogling her.

According to Charles Taylor, who discussed Prime Cut at length in his excellent 2017 book, Opening Wednesday at a Theatre or Drive-In Near You: The Shadow Cinema of the American ‘70s, critics dismissed the movie ‘as if it were a piece of rotting meat left out for audiences to smell’. No doubt many today would see aspects of it as problematic. But this was 1972, the year Deep Throat was released, briefly ushering in a time when porn became mainstream middle-class fodder. America was only just starting to disentangle itself from its war in Indochina and violence was all over the big screen crime film: The Godfather, Barry Shear’s Across 110th Street, and what is possibly the most misanthropic private investigator film ever made, Hickey and Boggs, written by Walter Hill and directed by Robert Culp.

It’s easy to view Prime Cut as a metaphor for America’s war in Vietnam: Marvin and his men going bush against one of countless cinematic stand-ins for the Vietcong. When we first meet Mary Ann at his cattle auction he is chewing on a plate of offal. As Taylor put it in a post for a UCLA Film and Television Archive screening of the film, Mary Ann “literally eats guts, like Saturn devouring his sons and this is a time when America was devouring its sons in Vietnam. In this movie it’s devouring its daughters, too.” More interesting is how Prime Cut flips the long-held crime cinema stereotypes of the vicious, tough big city gangster and quiet, peaceful, essentially decent small-town rural American. As Taylor put it, “This was a time when big cities were dangerous, where there was a suspicion of them in the heartland. When that suspicion was confirmed by movies.” He cites Dirty Harry, which appeared in 1971, as a key example, but the trope of crime being out of control in America’s large urban cosmopolitan spaces went into overdrive with the release of Michael Winner’s Death Wish in 1974.

Prime Cut presents Devlin, the gangster, as the morally upright character and his enemies in rural Kansas as the epitome of violence and amorality. It is a treatment of American’s urban/rural divide that would feature in a much more critically lauded American film released the same year, Deliverance. Taylor also sees Prime Cut as a critique of the paranoia of then President Nixon. In his book, he expressly links the film to the influence of the ‘Silent Majority’ speech of November 1969, Nixon’s attempt to drive a wedge between hinterland middle America and the emerging anti-war counterculture on the country’s coasts. “You think I don’t know this country?” Mary Ann sneers at Devlin. “I know it. This is the country and I give it just what it wants. Dope and flesh.” The pimp goes onto deliver one of the film’s most important lines. “Chicago’s a sick old sow grunting for fresh cream. What it deserves is slop. Someday they’re gonna boil that town down for fat. Here it’s different. This is the heartland.”

The day after Prime Cut debuted in Kansas City on June 16, 1972, five operatives of Nixon’s Whitehouse were arrested for burglarising the offices of the Democratic National Committee and the corruption and sleaze of his presidency would soon be on open display for the world to see. 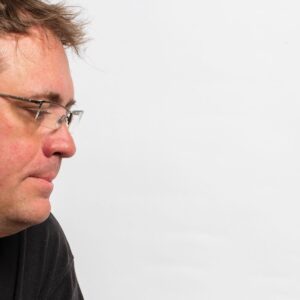 Steven James is unlike almost any writer you’ll ever meet. He has a master’s degree in storytelling. Not an MFA....
© LitHub
Back to top