Can a troubled genre raise the bar for feminism?

Many of us are familiar with Alison Bechdel’s test for feminism in film (and readily applicable to literature), also known as the Bechdel-Wallace Test. We also know how few classic works fulfill its simple criteria: two named female characters have a conversation about a topic other than a man. The test initially evolved as a running gag in Bechdel’s comic Dykes to Watch Out For, soon spreading across the internet and into my childhood home, wherein my family had endless arguments over whether the Bechdel Test could apply to history, in particular, military history and military fiction (my father’s area of expertise, and of zero interest to my sister). This recurring argument has led to additional arguments about how to apply the test to different genres, and a long-term discussion of how to measure feminism within a subject matter designed to explore the effects of toxic masculinity.

Stories set in primarily masculine worlds regularly fail the Bechdel Test, yet one can argue that any work of fiction wrestling with with the meaning of gendered behavior—rather than accepting and thus reinforcing standard gender norms—is inherently more valid than a story that shoe-horns in just enough female characters to check off some kind of nod-at-feminism box.

While genre fiction, especially detective fiction, has grown increasingly interested in portraying women’s stories, certain modern genres fulfill the test in rather specific ways, often bottlenecking their Bechdels into one or two discrete and relatively predictable conversations. My sister loves scifi so much partially because of the particular way space opera tends to pass the Bechdel Test (when it does at all)—two female battleship commanders have a discussion about strategy. The fantasy version usually unfolds when two women have a conversation about magic. (I’m fairly certain that this is the only context in which the Wheel of Time series gets a passing grade.) War stories usually only pass when two nurses have a conversation about supplies. The point here is that in genre fiction, there are certain types of conversations that happen over and over again; often they’re intrinsic to what brings the book into the genre in the first place, and so genre literature’s relationship with the Bechdel Test and whether a given book passes (or fails) tends to be be rather … specific.

There’s been a whole lot of hullabaloo on the internet since the announcement of a new prize for thrillers with no violence against women. For a thriller to be eligible for the Staunch Prize, “no woman [may be] beaten, stalked, sexually exploited, raped or murdered.” Given where I work (CrimeReads), my initial impulse upon seeing the prize announced was to take a coworker up on her suggestion and make a reading list of of thrillers eligible for the prize, and then realized I couldn’t think of a single one. Authors immediately objected to the prize as not acknowledging the realities of gendered violence. Sophie Hannah, in an op-ed for the Guardian, wrote that

“Brutality is not the same thing as writing about brutality. After suffering a trauma, some people find it consoling and empowering to read, or write, about fictional characters who have survived similar experiences. If we can’t stop human beings from viciously harming one another, we need to be able to write stories in which that harm is subjected to psychological and moral scrutiny, and punished.”

Hannah goes on to say that “The Staunch prize could instead have been created to honour the novel that most powerfully or sensitively tackles the problem of violence against women and girls.” The same could be said about true crime. True crime stories make sense of what could happen to us, what has happened to us, and what might keep something from happening to us in the future. Mixed with memoir, they are a rejection of women as targeted bodies, mingling body and mind, trauma and processing, harm and healing. There is a practical element to engaging with true crime stories while in a female body. It is a form of collective warning, information-sharing, and processing. Yet despite the enormous readership of crime fiction and true crime among women, most works in the genre are as unable to pass the Bechdel Test as they are ineligible for the Staunch Prize.

I don’t claim the right to come up with a test to redefine feminism in the genre—that’s the Bechdel wheelhouse, and who am I to compete with a term originating from comic book dialogue? I’m happy to riff on their innovations. Controversy over the Staunch Prize has reinvigorated what has sometimes been a  rather circular conversation about gender, violence and representation, by starkly pointing out that women’s stories, in the context of crime fiction, are frequently narratives of male violence and its effects. Reframing the Bechdel Test for crime fiction is just another way of stepping out of a circular conversation, in search of new feminist possibility.

Here are a few suggestions for how we might create a Bechdel Test tailored to crime fiction’s very particular needs.

In crime fiction, or at least, the sub-genres I love, two women rarely have a conversation at all—and when they do, it is almost always about a man (albeit a dangerous one). Therein lies the first possibility for setting the bar for feminism in crime fiction: two women warn each other of a dangerous man, or cooperate to cover up the death of a violent man. I know, there’s no part of the Bechdel Test that differentiates between a positive valuation of a man and a negative one, but in the mystery genre, information needs to be shared for characters to survive. When two women warn each other about a dangerous man, they are more likely to survive to talk about things other than men in the future—thus a warning about a man can be a necessary prerequisite to speaking about any other topics at all.

In the mystery genre, information needs to be shared for characters to survive. When two women warn each other about a dangerous man, they are more likely to survive to talk about things other than men in the future.

The most radical version of this idea could be “two women compare notes about a man they have both dated, realize the warning signs, become best friends, and never speak to that man again.” It’s amazing how many crime fiction characters are married to men they know nothing about, then seem shocked when they find out what’s in the cellar. With some thorough vetting of potential mates, through checking with exes, most domestic suspense plots would be derailed at the start. The Girl in the Train saves the comparing of notes till near the end, but still uses two women discussing a man as a prelude to those two women leading happy, independent lives, while the man ends up (spoiler alert) dead. And this is just the first on our list of the low-hanging conversational fruit of feminist crime fiction.

A second option for passing a crime fiction Bechdel Test involves a living female detective reading the data of a woman’s corpse and investigating the metadata of her interrupted life. A crime scene investigator will occasionally commune with the dead of her own gender, her dissection of another’s life a form of conversation. Tana French’s The Trespasser features such a conversation; a female detective, examining the body of a beautiful dead woman in an unadorned room, detects purpose in the woman’s choice of artifice while her colleagues see only a pretty corpse.

The ghosts of the past enhance the pursuits of the present. In Rachel Howzell Hall’s Land of Shadows, her detective Elouise “Lou” Norton finds closure through her pursuit of a murderer when she takes on the case of a young girl murdered at the same age as her sister. In Flynn Berry’s Edgar-Award-winning Under The Harrow, a woman takes great risks to protect a woman who reminds her of her sister. When a detective helps another woman merely because she reminds them of a different woman, that’s feminist community in action. The sisterly vengeance narrative is a particularly intriguing one when compared to its predominant masculine equivalent, which I will dub the “You killed my wife?” narrative in a shameless appropriation of Eddie Izzard’s “Dressed to Kill” routine. To unpack the statement from the pop culture references, the male revenge narrative tends to kill off a man’s wife or child, then sends him off immediately on a quest for vengeance, while the female revenge narrative takes time and plotting, and almost never sends a woman after a killer who got her man—instead she seeks vengeance for the suffering of a sister, friend, mentor or child

3. Communication through Swapping or Rejecting Identities

In stories that feature conversations between two women, names are often discarded. So here’s another rubric: two named women swap identities, or toss aside names in order to run. In Lisa Lutz’s The Passenger, two women switch documents to avoid their respective pursuers, and discuss enhancing their new alias through the name changes offered by marriage.

Another form of the same criterion: one woman pursues another woman for the purpose of utilizing or appropriating her identity. A gothic trope of women’s identities merging, competing, dominating, and replacing one another is currently making a resurgence in a series of frenemy mysteries, wherein one woman recruits another for a sinister purpose. Behind Her Eyes, by Sarah Pinborough, and The Perfect Stranger, by Megan Miranda, are two such tales to be released in the recent past, and given the high quality of both, are sure to be much imitated. So that brings us up to three.

4. Communication Between Evolving Identities Over Time

The women of crime fiction are often characters who’ve changed drastically over the course of their lives, sometimes to the point of making names meaningless, or so meaningful as to connote entirely different identities. A fourth take on a Bechdel Test for crime fiction might include conversations involving the same woman, over a period of time, in which she has multiple names and conflicting identities. Amy Gentry’s Good As Gone plays havoc with the nature of names and identities, as we follow a girl back in time through multiple names. Each is assigned to her by a dominant personality, and each represents a completely different approach to her porous yet evolving identity. Lori Rader-Day’s The Day I Died takes us into a woman’s life during a moment of crisis that forces her present self to confront the unfinished business of her past self.

The Bechdel Test is not a scientific measurement of feminism in fiction. It sets an incredibly low bar with its criteria, and exists as a pointed statement about how most fictional works fail to meet even the lowest bar possible in measuring fictional feminism. Crime fiction, likewise, is in need of a new bar. It is also in need of a new context—one in which the realities of violence against women are acknowledged and engaged with critically. 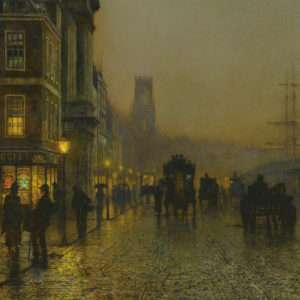 –I now describe my country as if to strangers. I chose those lines as the epigraph for a novel called The Distant...
© LitHub
Back to top