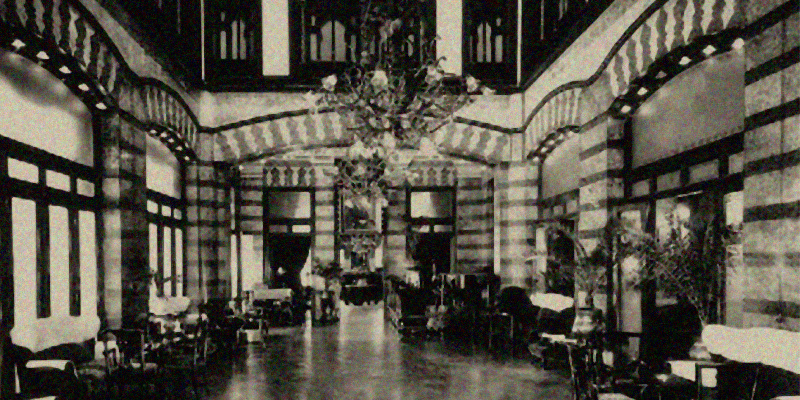 A look at the most inspiring and atmospheric writerly accommodations of the 1920s and 30s.

Agatha Christie once said that, “the best way of getting down to work is in a very bad hotel where there is nothing else to do but write, for there are no distracting comforts to indulge in, no good meals or interesting guests.”

If anyone was an expert on the best way to “getting down to work” it was the Queen of Mystery—although I doubt that her version of a “bad” hotel would come close to mine!

It’s not surprising that many of Christie’s novels were written in, or inspired by, hotels. She was a passionate traveler and in 1922, Christie took a ten-month voyage around the British Empire with her first husband, Colonel Archibald Christie, as part of a trade mission to promote the upcoming British Empire Exhibition. Christie kept meticulous details of her trip, wrote lively letters home to her mother and took dozens of photographs with her portable camera. The Grand Tour, a unique travelogue, was posthumously published in 2012 by her grandson Mathew Prichard.

After a devastating divorce, Christie lost her heart to the ancient sites of Iraq and an archaeologist called Max Mallowan who she married in 1930. En route to digs in the Middle East, they often stayed at the exotic Pera Palace Hotel in Istanbul. Now known as a “museum hotel” it was built in 1892 for the purpose of hosting passengers traveling east on the glamorous Orient Express and not surprisingly, where Christie was inspired to write Murder on the Orient Express (1934). In fact she stayed at the Pera Palace so often that room 411 is called the Agatha Christie King room and features a collection of her books and a replica of the typewriter she would have used. 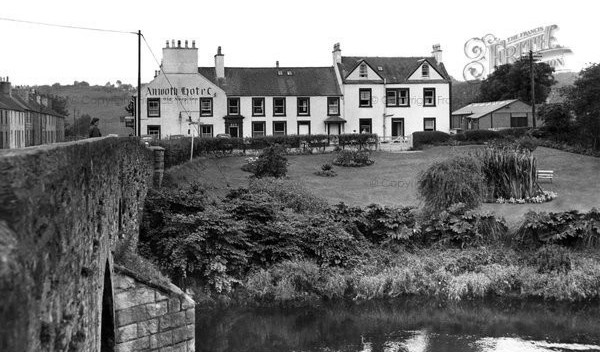 Another favorite was the 19th century Old Cataract hotel in Aswan where Christie set the opening scenes of Death on the Nile (1937). Now known as the Sofitel Legend Old Cataract Aswan Hotel, this too, boasts an Agatha Christie Suite.

Two thousand miles away in England, Christie frequented yet another hotel. In 1929 Burgh Island hotel was built nestled into the rock face right on the sea. Accessible at low tide, guests are still transported from the 21st century to the 1930’s by a bizarre contraption called a Sea Tractor. There, Agatha’s Beach House was built specifically for her as a writer’s retreat and where she wrote Evil Under the Sun (1941) and And Then There Were None (1939).  The isolation and eerie landscape became Soldier Island in the PBS mini-series adaptation of And Then There Were None (2015). Speaking of an eerie landscape, Jamaica Inn, an eighteenth century coaching inn on Bodmin Moor in northeastern Cornwall, is definitely worth a mention.

Bodmin Moor is bleak, treacherous moorland and holds the proud title of Britain’s wettest moor. It’s easy to get lost, especially when the fog rolls in which is exactly what happened to Daphne du Maurier when she and a friend were out riding one afternoon.  By some miracle they were led by their horses to safety at Jamaica Inn where they met the local rector who entertained them with ghost stories and tales of wreckers and smugglers. Du Maurier was mesmerized by the stories and went on to write the gothic suspense novel, Jamaica Inn (1936). She lived at the inn on so many occasions that her room is now a museum. 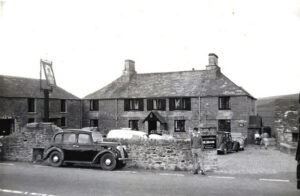 Dorothy L Sayers was captivated by the beauty of southern Scotland and regularly visited The Anwoth Hotel in Gatehouse of Fleet with her husband Mac Fleming. Fleming was an amateur artist and, in the 1930s, the area was considered a flourishing artists’ community. While Fleming painted, Sayers wrote—always staying in Room 6 overlooking the river.

She wrote The Five Herrings (1931) at The Anwoth and both the hotel and the landscapes of Dumfries and Galloway are central to the plot and vividly described in Lord Peter Wimsey’s adventure. Sayers dedicated The Five Herrings to John Dignam—who owned the hotel at the time—as the “kindliest of landlords“ and that “we shall come back next summer to eat more potato-scones at the Anwoth.” Since then, it has changed hands several times and is now known as The Ship Inn. 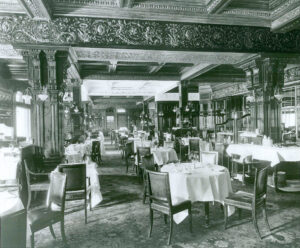 The Savoy Hotel in London is a world away from the Middle East, Scotland, the English Riviera and an old coaching inn on Bodmin Moor. It was at this London landmark that Arnold Bennett penned Imperial Palace (1930), a huge novel based on the daily workings of the five-star hotel. On the 25th September 1929 Bennett wrote in his journal, “the big hotel de luxe is a very serious organization; it is in my opinion a unique subject for a serious novel; it is stuffed with human nature of extremely various kinds.” It wasn’t the first novel that Bennett had written about hotels but it turned out to be the last book he wrote before he died the following year of typhoid, allegedly from drinking tap water while traveling overseas.

Bennett stayed at the Savoy many times. He had frequent meetings with the publicity director and the managing director, George Reeves-Smith, to whom he dedicated his novel. Although there isn’t a suite named in Bennett’s honor, the original manuscript is among the hotel’s private treasures and the Arnold Bennett Omelette—with smoked haddock, hollandaise sauce and cheese—is still a signature dish at the Savoy Grill.

As writers in today’s 21st century world of Google Earth, YouTube, documentaries and travel programs, it’s tempting to stay home and not have that boots-on-the-ground experience of places we write about and the hotels where we stay—pre-Covid-19 of course. But there is no substitute for the Real Thing.

Initially I was confident that an early draft of Death at High Tide, the first in the Island Sisters Mysteries, was solid. The setting was a place I had only visited from the comfort of my armchair; the hotel, one I knew fairly well from the Internet and a handful of YouTube videos. But when I was given a chance to visit both, I thought of it only as a fact-checking exercise.  I couldn’t have been more wrong!

My facts were sound but the historic spirit of these stunning islands just twenty-eight miles off the southwest Cornish coastline, were something that could only be captured by being there and breathing in the sea air. My “modernized” Art Deco hotel still clung to the 1920s. It was a time capsule with a haunting sense of nostalgia that could not be felt by zooming in on Google Earth or on a website.

Apart from the obvious enjoyment of staying in a hotel, it’s the small, seemingly irrelevant details, the odd bits of trivia along with surprising discoveries that add authenticity and life to a story. Hotels—especially bad ones—are melting pots of humanity and as a result, perfect backdrops for mischief and murder. And who knows, if you have a favorite hotel that you return to again and again, maybe your name will grace the door of a suite or, if you’re really lucky, perhaps after an Omelette. 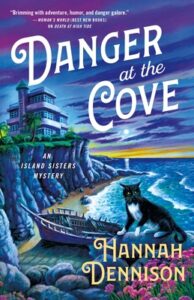 HANNAH DENNISON was born and raised in Hampshire but spent more than two decades living in California. She has been an obituary reporter, antique dealer, private jet flight attendant and Hollywood story analyst. For many years Hannah taught mystery writing workshops at the UCLA Extension Writers’ Program in Los Angeles. In addition to the Island Sisters series, Hannah writes the Honeychurch Hall Mysteries and the Vicky Hill Mysteries both set in the wilds of the Devonshire countryside where she now lives with her two high-spirited Hungarian Vizslas. 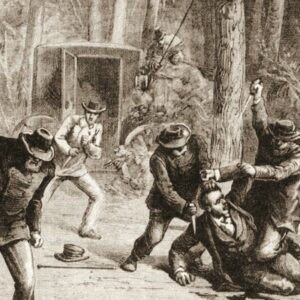 In October 1881, the chief commissioner of the Dublin Metropolitan Police, George Talbot, received an intelligence report...
© LitHub
Back to top