Or, how to use historical facts to show modern-day resonances.

When I set out to write a thriller in which my protagonist was in mortal peril no later than the end of the first paragraph, I knew I wanted to include something about the Enigma machine, the encoding device used by the Axis during World War II, and about the successful British effort to break the supposedly unbreakable Enigma code which took place at Bletchley Park. Like most people, I didn’t know much about Bletchley or Enigma twenty-five years ago when I became friends with a British woman named Mavis Batey. We bonded over our mutual interest in Lewis Carroll and met at several conferences. Then I discovered Mavis had been at Bletchley—not as a secretary or a transcriber but as a mathematician and code breaker. Not until after her death did I learn just how important her work at Bletchley had been. This sweet old English woman with whom I had enjoyed cups of tea and walks through London was one of the key figures at Bletchley and a true hero of the war.

So how could I pay tribute to the work that Mavis and thousands of others did at Bletchley in the context of a contemporary thriller with shoot-outs, explosions, car chases and all the rest? How could the historical facts of Bletchley and of other aspects of World War II, inform a contemporary thriller without overwhelming it? And how could a thriller—a book written to be a rollercoaster ride of plot twists, danger, and reversals of fortune—also show how many of the issues that surrounded World War II are still relevant today?

To answer these questions, I first had to go to Bletchley. I had been there twice before—once before it had even been turned into a proper museum. Now I returned, determined to find a way this quiet country estate dotted with unimpressive wooden huts could be incorporated into my novel. I took pictures and videos, made notes, and purchased guidebooks that explained (almost in layman’s terms) how Alan Turing, Gordon Welchman, Dilly Knox, Mavis Batey, and thousands of others broke the Enigma code and changed the course of the war. I’ve done lots of research for novels before, but it has rarely been this much fun—leaning over actual Enigma machines, using a checking machine just like codebreakers did in the 1940s, watching a reconstruction of the Bombe (the machine that Alan Turing and Gordon Welchman designed to help break the code and which became an important step in modern computer science) as it clicked and whirred.

But I didn’t just learn about how to break the Enigma code using 1940s technology—I also took careful note of the layout of the facility. Where were the entrances and the hiding places? How could you (fictionally of course) break in . . . or out? And I also learned something else that ended up being central to the novel that would become The Enigma Affair. In the archives at Bletchley are thousands of intercepted German Enigma messages that have never been decoded. What if my protagonist had such a message and could only decode it by going to Bletchley? My visit to Bletchley Park had given me the key to writing my thriller.

But is military codebreaking still particularly important today? Maybe it is, but not in a way that affects the life of the average reader. It’s certainly not something we see in the news or struggle with in our families. But all I needed to do to discover aspects of World War II that remain relevant was turn on my TV. Charlottesville and Black Lives Matter made it clear that racism and white supremacy—a cornerstone of the Third Reich—were sadly still threats. The news was filled with stories about science deniers convincing people that the earth was flat or that vaccines caused autism. I read stories about World War II vets who stayed silent about their service for decades—so traumatized by what had happened it affected the rest of their lives. White Supremacy, “fake news,” PTSD—these had been huge issues in the 1940s and they remained so today.

Not long after my trip to Bletchley, I was in Prague with my wife and some friends. I had decided I wanted my heroes to go to Prague at some point in the narrative because I wanted them to experience the Baroque Library at the Klementium, one of the most beautiful libraries in the world. (If you know my work you will know that there are always old books and libraries).  While some research is exciting, some is mundane. As we walked through Prague my friend asked me why I kept looking down side streets. “I need to find a place for my characters to park,” I said. While researching the National Library of the Check Republic, I discovered that Heinrich Himmler’s collection of occult books, some 11,000 titles, had ended up there. Occult books sounded a lot like fake news to me, and I knew that Himmler was one of the chief architects of the Holocaust and a vocal proponent of Aryan supremacy. It didn’t take long to find examples of some of the bizarre things he believed in and the ways in which pseudo-scientists took advantage of him. Himmler, I decided, wrote the Enigma message my characters would need to decode.

When I gave three of my characters PTSD, I knew that their struggles would resonate with some readers—especially those who had ever been in combat. What I didn’t know was that, by the time The Enigma Affair was published, we would be recovering from a global pandemic and experiencing an almost a societal PTSD. Two of my characters have suffered trauma in the late twentieth or early twenty-first centuries, but one still deals with his nightmares about the day he helped liberate the Dachau concentration camp. My research into that liberation led me to the accounts of actual American soldiers who were there that day—sobering and heartbreaking stories of events and scenes that must surely have left lasting scars on those who were present.

All of this research—into Bletchley and Enigma, into Himmler and the camps, into PTSD—gave me the background I needed to both pay tribute to the Bletchley codebreakers and make the underlying themes of the book both connected to World War II and relevant today.

Then came the fun part—sending a small-town librarian and a professional assassin, both with their own emotional baggage and history of trauma, traipsing across Europe with a 75-year-old Enigma message that could have major implications for the contemporary fight against white supremacy. Not everything I discovered in my research painted the Allies in the best light—in war decisions must be made quickly and morality can get tossed out the window. But I believe that moral grey areas make for rich fiction—it’s why I chose a hero who is also a contract killer and why one of his cohorts is an obsessive collector of Nazi artifacts. When “good” and “evil” stop being binary and become a continuum that is mostly grey, narratives get deliciously complicated.

There was one other thing I learned from my research–something I suppose shouldn’t surprise a thriller writer because it is such a trope of the genre. One person (or one small group of people) can make a difference. Perhaps Margaret Mead put it best: “Never doubt that a small group of thoughtful committed citizens can change the world: indeed it’s the only thing that ever has.” In the thriller genre it’s often the lone spy or the lone assassin or even the lone librarian who changes the world. Patton Harcourt, my prime protagonist, changes the world. And Mavis Batey changed it too. The Enigma Affair is my little way of saying thank you. 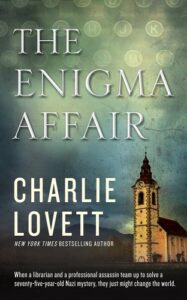 Charlie Lovett is the New York Times bestselling author of four previous novels, including The Bookman's Tale and Escaping Dreamland. His academic writings include Lewis Carroll: Formed by Faith and for children he has written The Book of the Seven Spells and twenty plays that have been seen in over five thousand productions worldwide. A former antiquarian bookseller and avid book collector, he and his wife, Janice, live in Winston-Salem, North Carolina, and (when the pandemic allows) in the village of Kingham in England. 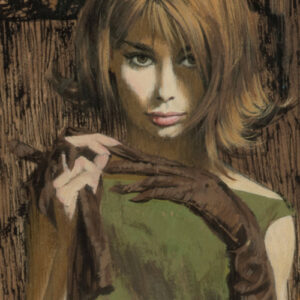 Bouchercon is once again upon us. For the first time since the pandemic began, the crime fiction conference is happening...
© LitHub
Back to top