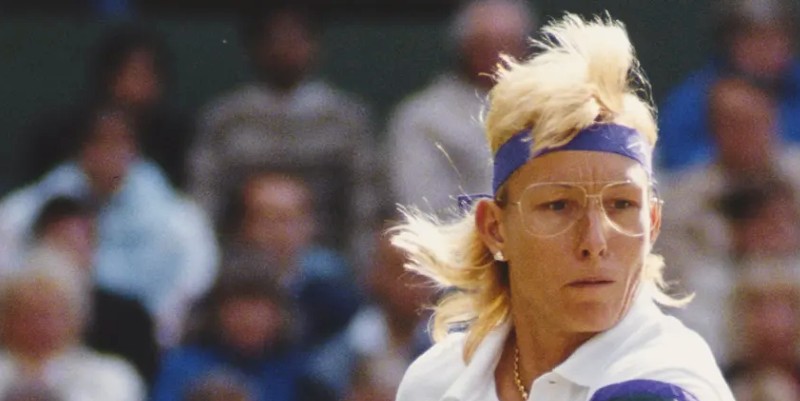 Beth Parker looks back at the brief run of tennis thrillers co-authored by one of the greatest ever to play.

In 1994, when I was 13 years old, I was completely obsessed with tennis. I would ride my bike to the local free courts and hit balls against a wall when I didn’t have a hitting partner. I played doubles on my J.V. tennis team —in retrospect, rather poorly; I never quite made it to varsity. But most of all, I would watch the U.S. Open every August on the USA Network (and CBS on the weekends): it was the last gasp of summer before I returned to school in the fall, and it was the only time of year when my parents would just let me sit around the house and watch TV.

My love of tennis knew no bounds. Before the internet, my channeling of this love mostly consisted of clipping newspaper articles from the sports section of my local papers, The New York Times and The Journal News: articles (with photos— and I always preferred The Journal News because their pictures were in color) about Steffi Graf, Monica Seles, Andre Agassi, Pete Sampras and Martina Navratilova, and carefully saving them in a folder under my bed.

But something happened that year that really pushed my devotion of tennis into overdrive. Martina Navratilova released the first novel in her thriller trilogy, The Total Zone. 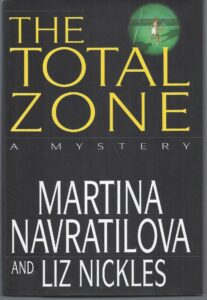 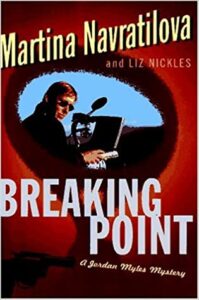 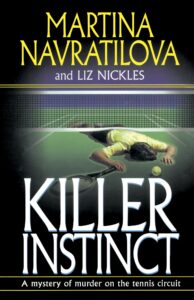 Sure, there had been celebrity novels before, and even celebrity memoirs. But Martina Navratilova—a sports star with more singles, doubles and mixed doubles wins than anyone, man or woman, was writing a novel—about tennis! Looking back, I realize that sports stars becoming novelists is an incredibly rare thing: I can only think of a handful who have written novels, with a co-author or not—and mostly in the YA or middle grade space, and, not to put a fine point on it, but… exclusively men: Kareem Abdul-Jabbar, Derek Jeter, and LeBron James come to mind.

To my 13-year-old self, The Total Zone delivered in spades. Following tennis star-turned physical therapist and amateur sleuth Jordan Myles, it named-dropped players like Monica Seles, Gabriela Sabatini and Boris Becker. Navratilova offered up, to my young, naïve readership, a thrilling story with behind-the-scenes tales of life on the tennis circuit. I needed this book.

The Total Zone had gossip about other tennis players—did you know that Becker supposedly injected himself with bee serum?!—and was an opportunity for me to read about tennis when there wasn’t actually any tennis happening on TV or updates in the newspaper.

I recently revisited The Total Zone and the other books in the Navratilova trilogy (Breaking Point and Killer Instinct: touché on the rather brilliant tennis-pun titles) to see if they held up. This trilogy played such an important role in my teen, tennis-loving identity: but I hadn’t read them since the 90s when they were released, I admit had forgotten a lot of the details and most of the plots.

The first thing that I noticed in the rereading of these novels (besides the surprisingly convoluted plots and many, many, murders and non-sports-injuries on the circuit) was how the stabbing of Monica Seles loomed large. It is mentioned in all three novels, multiple times, and when it originally happened on April 30, 1993, it shook the tennis world to its core. At the time, terrorist attacks weren’t common (the Oklahoma City Bombing wasn’t until 1995), and no one ever thought that someone could be attacked on the court. Tennis is a gentleman’s game, after all: the biggest recent scandal prior to the stabbing was Andre Agassi threatening to boycott a French Open dress code. I’m sure that the stabbing was on every tennis player’s mind, including then-current player Martina Navratilova who won her last singles grand slam in 1990, but continued to play until 2006 when she officially retired.

With the underlying threat of safety amongst tennis players, what better vehicle for a thriller than the grand slams and other tournaments? Looking back and seeing that there were only three books in the series: if they had been huge bestsellers, I’m sure there would have been a fourth, just to round out the four major grand slams: Wimbledon, The French Open, the US Open and the Australian—and yet, in rereading, I realize that the third book in the series culminates at a tournament in Hilton Head! If I could ask Navratilova and her co-author, Liz Nickles one question, I’d ask if there was ever a fourth book in the works and what tournaments they’d highlight.

But overall, in revisiting the novels, I found the more mature reader in me wanting more. The plots twists didn’t always earn the weight of the storylines or their endings, the stories were a bit convoluted, and sadly, the main character Jordan Myles wasn’t that good of a sleuth—more of the credit needed to be given to her slovenly, comic relief investigative partner, The Fish. Additionally, Jordan Myles was almost killed or injured for issues way above her pay grade: she is practically drowned, side swiped, and at one point she almost gets taken out Cary Grant style in North by Northwest. The stories just weren’t that believable at the end of the day …  I mean, it isn’t a spoiler to say that someone got taken out by an alligator at the end of book three. AN ALLIGATOR! And disappointingly, I wanted Myles to be more of a roman à clef to Navratilova—instead she made a doppelgänger—Mariska Storrs—who was never a main character—and strangely, Navratilova existed as an actual player in this fictional world—she is name checked in the books as well, but never makes an appearance.

All that being said, the books are entertaining, and really do get into some fun minutia about life on the tennis circuit, if light on actual tennis play. In an eerie bit of foreshadowing, Donald Trump makes a cameo in Mayor Rudy Giuliani’s box at the US Open in The Total Zone. And if you’re a super tennis fan like me, the nods to veteran players—Jordan has a dog named A.M. short for Alice Marble, a player who won 18 grand slams in her heyday—are particularly charming.

They may not hold up to my (only slightly more sophisticated) reading standards of today, but Martina Navratilova’s thrillers, were, nonetheless, trailblazers during their time, being written by both a sports celebrity and a woman; and gave this young tennis fan something to look forward to in between grand slams.

Beth Parker is a freelance publicist with her own firm, Beth Parker PR. A lifelong New Yorker, she currently lives in Astoria, Queens. 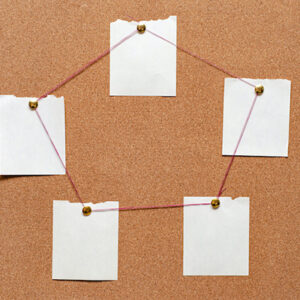 His eighteen-year-old daughter had vanished a week ago, and the police had nothing. On February 13, 1917, Henry Cruger’s...
© LitHub
Back to top