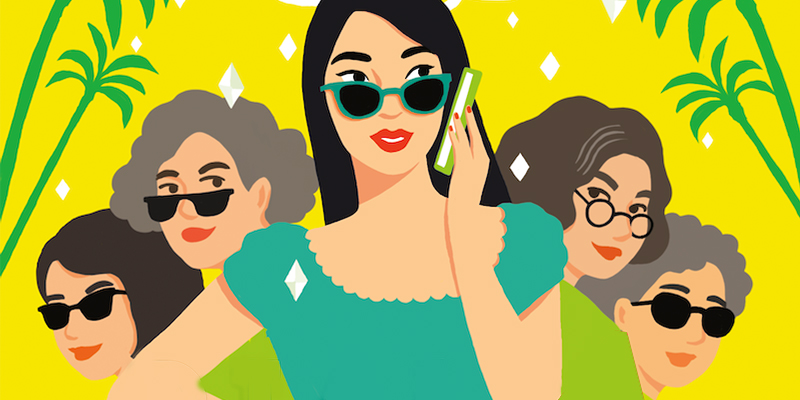 On crafting a cozy mystery full of the cheerful, conflicting advice of a large extended clan.

I am often asked how I came up with the wacky situations in Dial A For Aunties, my novel about a woman who accidentally kills her blind date and must rely on her meddlesome mother and aunties to get rid of the body. The truth is that aside from the dead body, my large family can produce situations as wild as the ones in my book. Of course, they all come from a place of deep love and loyalty. You won’t find a family more eager than mine to lift you up when you’re down. They may go a little overboard, but they always remind me of how loved I am.

If you think that Ben Stiller’s character had a tough time in Meet the Fockers, you haven’t seen what happened to my shy, soft-spoken English husband (then boyfriend) in Meet the Sutantos. Mike was raised in a tiny English village where his nearest neighbor was at least a mile away, and he considered Oxford, population 150,000, a big city. So imagine his shock when he arrived to the giant metropolis that is Jakarta (it’s technically a “megacity”), population 31 million.

The first thing you need to know about Indonesians is that we’re very cheerful people. Like Californians, but with an even more optimistic take on life, if that’s at all possible. We take everything bad in stride and turn the negatives into a source of humor. So when Mike came to visit Indonesia, everywhere we went, people would cheerfully say, “Welcome to Indonesia! Have you been poisoned yet?” “Have you had diarrhea yet?” “Have you had to go to the hospital for poisoning yet?”

This may seem like rather a strange way of welcoming someone into your country, but due to the lack of good hygiene protocols in Indonesia, food poisoning is sadly a common occurrence. Most of us who have grown up here have developed a cast iron stomach, but foreigners are particularly susceptible to poisoning. Mike tried his best to be careful, but within a week of his arrival, he was indeed poisoned. Enter my aunties and uncles.

I really think they’d been waiting in the wings with bated breath for the first signs of poisoning, barely restraining themselves from pouncing on poor Mike with their favored remedy. Within minutes of my parents announcing that Mike has been poisoned (they really did make an announcement. It was A Whole Thing), the first remedy arrived from Fifth Uncle. And yes, I really do mean MINUTES, because many of my aunts and uncles live on the same street as us. Anyway, the first home remedy was a bag of green coconuts.

“Tell him to drink the coconut water,” Fifth Uncle said. “Young coconut water is good for removing impurities from the body.”

Then another package arrived, this time from Sixth Aunt. It contained bottles of activated carbon pills.

“Aiya,” my mom said, “Of course we already have these!”

“HAVE MORE,” Sixth Aunt snapped. “No harm in taking more charcoal pills! It’s good for removing impurities from the body!”

The third package, from Third Uncle, made Mike balk. “What do you mean, this is ‘bear’s milk’?” he said to my mom when she thrusted the canned milk at him.

“BEAR’S MILK! You know! BEAR’S MILK.” My mom is one of those people who think that speaking louder would make them easier to understand.

Mike looked at me, his eyes wide with a plea for help.

He looked at it with hesitation. “Not sure if I should be drinking milk—”

“YOU DRINK,” my mom ordered.

All through the day, packages kept arriving with different remedies. And, of course, food. Everyone sent congee (rice porridge). My mom made another announcement that we already have congee, but each uncle and aunt swore that their congee was different, because it contained X ingredient and was therefore superior. Mike ate nothing but congee for days (now, over ten years later, Mike still refuses to have a single bite of congee). Slowly, he got better. A few days later, he staggered down to join us for dinner, where there was yet more congee waiting for him. Meanwhile, my dad cooked steak for the rest of us. He served up the steak family style, a huge plate of sizzling chunks of beef in the middle of the table. Mike had a piece. “Best steak ever!” he said. Then he had another, and another. My mom flapped around him and said, “You’re just recovering from food poisoning! You’re not supposed to have beef!” But after days of nothing but congee, Mike was unstoppable.

Later that night, he came to regret the steak. In fact, it got so bad that we drove him to the hospital, where he had to be hooked up to an IV. As he lay there, moaning softly, my mom patted him on the head and said with a gentle smile, “Should have listened to me.”

And that is why Meet the Sutantos would’ve been a way better movie than Meet the Fockers.

Fortunately, my family has never had to help me hide a dead body…or have they? But they are definitely the first people I would call if I needed someone to help me cart around a man I’ve just killed. I would have to be prepared for a lot of conflicting advice about how best to get rid of it though!

Jesse Q. Sutanto is the author of DIAL A FOR AUNTIES (Berkley; April 2021). She grew up shuttling between Indonesia, Singapore, and Oxford, and considers all three places her home. She has a Masters in Creative Writing from the University of Oxford. Jesse has forty-two first cousins and thirty aunties and uncles, many of whom live just down the road. She lives in Jakarta with her husband and two daughters. Learn more online at jesseqsutanto.com. 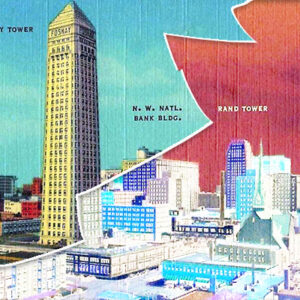 On the wall behind my office desk hangs a large, finely detailed street map of my hometown, Minneapolis, Minnesota, circa...
© LitHub
Back to top