Mormon Mysteries: Who Are They For?

Even though I loved Sherlock Holmes as a kid so much I wrote my own book of trivia about the series at age twelve, I never thought of myself as someone who would write mysteries for a living. I loved Anne Perry early in my writing career (who I later found out was Mormon) in particular for her ability to credibly write the dynamics of a married couple. When I was captivated in 2011 by the Josh and Susan Powell case, though, I discovered a need to write about crime in a specifically Mormon community, because I believe that case ended the way that it did due to peculiarities of our beliefs that outsiders can’t easily understand.

As it turns out, writing as a Mormon for a national audience about Mormon culture is tricky.

My Linda Wallheim mystery series allows me to show my community as it is: with both heroes and villains. I get to write about current events (like the 2015 policy of exclusion calling for excommunication of same sex married members) and thorny historical problems (like polygamy). In the most recent installment, Not Of This Fold, I got to write about things I love about Mormonism, like its outreach to poor and marginalized community, as well as problems of racism within that framework of “charity.” But the longer I’ve worked on the series, the trickier it has seemed to me to be “fair” to both the way Mormons see themselves and to how outsiders, former Mormons, and those who read only sensational headlines about Mormons see my religion and culture.

As it turns out, writing as a Mormon for a national audience about Mormon culture is tricky. I desperately wanted to get it “right.” As I wrote about in the afterword of The Bishop’s Wife, I was offering “my Mormonism” to my readers, acknowledging that this isn’t the same Mormonism that every Mormon will live. And boy, did I still get a lot of feedback, both from non-Mormon readers who think I was too “nice” to Mormons, and Mormon readers who were eager to tell me I couldn’t possibly be a Mormon because I got things “wrong,” or that I was clearly a “bad Mormon” because I wasn’t writing a version of Mormonism that led to syrupy conversion stories. The truth is that there have mostly been only two kinds of stories published about Mormonism:

1. Stories that are written by non-Mormons or angry ex-Mormons, often with a list of the worst possible tropes of Mormonism like polygamy, blood atonement, and conspiracies within the higher echelons of the church leadership. Sometimes these stories are historical, sometimes they’re written by great historians, but they often feel like “hatchet jobs” to those within Mormonism.

2. Then there are stories written by Mormons for Mormons, often published by the small number of presses that sell largely to Mormon bookstores across Utah. These can be saccharine sweet, and they always assume that the rules don’t have to be explained. If there are problems to be resolved, they are small problems because the characters are good people. After all, they’re Mormon, and Mormon readers want reassurance that other Mormons are like they perceive themselves to be.

In one of my first visits to a Mormon book club who had read The Bishop’s Wife, a reader asked me why I hadn’t made the villain of the story a non-Mormon so that I wasn’t demonizing anyone within our community. I was taken aback by the assumption that there are no Mormons who commit crimes since the news in Utah makes it clear this isn’t true. But she was genuine in this viewpoint that as a Mormon I should be writing only pro-Mormon stories. She couldn’t see that this strategy would make it difficult to write a sequel, or to appeal to a non-Mormon audience. Another reader at this group asked why I couldn’t just have Linda pray and have God reveal to her who the villain was. I tried to explain this hadn’t been my experience of how prayer worked, but clearly, it had been hers. Thus for her, my version of Mormonism wasn’t authentic. It was too dark for her tastes, tastes that have been partly formed by those cheery Mormon books she seemed to read about Mormons most of the time.

One of the early reviews of The Bishop’s Wife said it was surprisingly “neutral” in its treatment of Mormonism. I still think that’s a fair way of describing my books. I’m not trying to proselytize my readers into joining Mormonism. I’m not defending Mormonism. I am trying to explain it and the people within it without demonizing them or victimizing them as members of a “cult.” It can be hard to find similar neutral treatments of Mormonism in crime novels for two reasons:

So if you’re interested in books that treat Mormonism neutrally, as almost another country to explore, like the Linda Wallheim books, here are some to try: 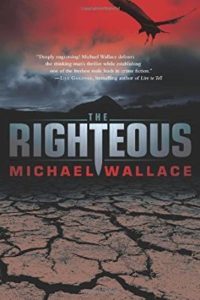 The Righteous Series by Michael Wallace

The Righteous is a look into a fundamentalist (polygamous) Mormon community. Medical student Jacob Christianson returns home to deal with the violent murder of his cousin Amanda, only to discover that the way she was murdered points to a plot to overthrow the fundamentalist church leaders. Christianson has to confront his own doubts as he works to solve a murder that could get him killed—or excommunicated. The whole series shows both mainstream Mormonism and fundamentalism in their relationship to each other and Jacob Christianson’s attempt to move between them as he makes choices to move forward in his own life. 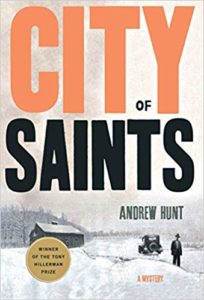 This wonderful historical mystery series begins with City of Saints. Art Oveson is a young sheriff’s deputy with a wife and child who is thrust into a murder investigation: a gorgeous socialite has been killed. Art delves into the underbelly of the “City of Saints” only to find out that the killing might be tied to polygamy (see a theme here?). He struggles to follow the rules given to him by his Mormon bosses in the police department in order to make the Mormon church look good and most importantly, not polygamous. Because it’s set eighty years in the past, it’s on the edge of criticizing long-ago Mormonism instead of present-day Mormonism. (There is a difference.) 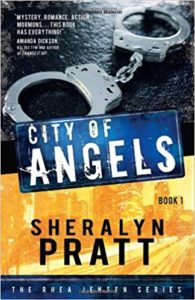 I read Sheralyn Pratt’s series (beginning with City of Angels) before writing The Bishop’s Wife. Rhea is a private detective and is in some ways more “gritty” than the typical Mormon. She’s a convert and living in Wasatch Front, in Los Angeles, well outside of the Mormon Belt. Her first case is about an apparent open-and-shut embezzlement that grows more dangerous and more serious, and includes a sighting of hapless Mormon missionaries. Her work often has nothing directly to do with Mormonism until later in the series, though she struggles throughout to find a way to be authentic to herself and her Mormon beliefs. 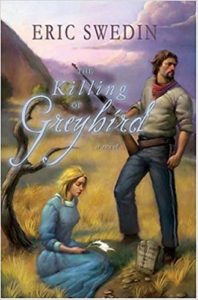 The Killing of Greybird by Eric Swedin

This standalone novel is a historical murder mystery set in pioneer Utah with the flawed-but-human David Halliday as the detective. Halliday returns from the Civil War front to discover that his adopted brother, a Native American named Grey Bird, has been murdered. Greybird holds a special place in my heart because of the appearance of the historical Ivie brothers—my paternal ancestors. I grew up hearing stories about my great grandfather James Russell Ivie, who we jokingly used to say started the Black Hawk War. One of my brothers is named after this ancestor (we’re all named after ancestors—it’s a very Mormon thing. I got one of the weird Danish names from our Danish convert grandparents). There are certain family members who will argue you to the grave about how historians have maligned our ancestors, but Eric Swedin is a professional historian who teaches at Weber State and he assured me that the Ivies he uses in his book were “bad people.” 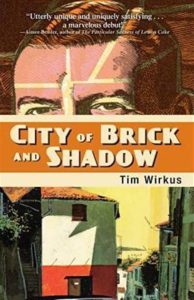 City of Brick and Shadow by Tim Wirkus

City of Brick and Shadow won the Association of Mormon Letters (AML)’s Best Novel award in 2014, beating out The Bishop’s Wife. In the Latin American neighborhood of Vila Barbarosa, two Mormon missionaries Elder Toronto and Elder Schwartz go looking for one of their converts when he disappears. They break rule after mission rule in their pursuit, and find plenty of reasons for him to have been killed, including being an enemy of the Argentine, a shadowy crime boss. It may not feel like a typical murder mystery, probably because there aren’t any detectives and the mystery remains unsolved at the book’s end. It is, however, very Mormon in the way it depicts missionaries trying to interact with a foreign culture and ultimately failing to understand it except on Mormon terms.

There are several well-known mystery series that have touched on Mormon themes, including Doyle’s Sherlock Holmes who famously encounters blood-thirsty Mormons in his first adventure, A Study in Scarlet. In addition, Tony Hillerman’s A Thief For Time and Craig Johnson’s A Serpent’s Tooth, as well as Scott Turrow’s Personal Injuries veer into Mormon territory (though I must admit that for me as a Mormon, it often has a comedic effect when they get things wrong, such as the character in Johnson’s book who insists that The Book of Mormon is “The Bible”—no Mormon would do such a thing). Anne Perry, a convert to Mormonism herself, writes several wonderful historical series. I thought she’d never mentioned Mormonism, but a friend of mine reminded me there’s a hat tip to Mormonism in Bethlehem Road, though Mormons aren’t specifically mentioned.

Another friend of mine alerted me to this much longer list of Mormon-themed mysteries, both fiction and true-crime, for those interested.

Mette Ivie Harrison is the critically acclaimed author of YA and mystery fiction. In 2014, she published her first adult novel, a mystery entitled The Bishop's Wife, about a Mormon bishop's wife who is drawn into solving crime when a young wife and mother in her ward goes missing. Her fourth in the series, Not of This Fold, is now out from Soho Press. Mette writes a regular blog about faith and Mormonism at Huffington Post. Mette holds a PhD in Germanic Languages and Literatures from Princeton University and is an All-American triathlete. She lives in Utah with her husband and five living children. She attends Mormon church regularly and serves as the "Ward Historian".

Why We (Still) Love Crime and Comic Book Heroes

Our Favorite Crime Books of the Year 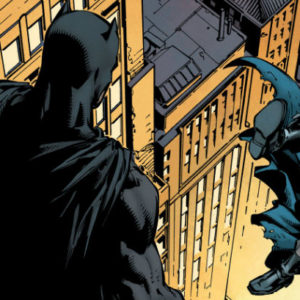 Why We (Still) Love Crime and Comic Book Heroes

You don’t have to be a comics nerd these days to note our society’s fascination with comic superheroes and crime fiction....
© LitHub
Back to top