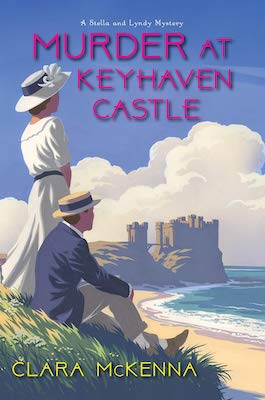 The following is an exclusive excerpt from Murder at Keyhaven Castle, by Clara McKenna. American ex-pat-turned-detective Stella Kendrick is just days away from marrying her love, Viscount Lyndy Lyndhurst, when a mysterious man (holding a newspaper clipping about her upcoming nuptials) is found trampled to death. And when a second person turns up dead, one of Lindy's own relatives is accused of the crime! Stella must find the killer, before death does anyone else part!

Unable to bear the stench of bananas, horse dung, smoke, and salty air, Jesse James Prescott pulled the red bandanna up over his nose. He stretched his shoulder blades, sore from leaning so long against the clapboards, and shot a glare up at the bunches of yellow fruit dangling above his head. Nasty things. Made him choke the one time he’d tried one. What had he been thinking, suggesting Snook’s as the rendezvous point? Sure, in the chaos and bustle of the ship’s arrival, the fruit merchant nearest the wharf, with its flashy displays of exotic produce enveloping the entire storefront, was an eye-catching landmark no one could mistake. But the god-awful smell . . .

Jesse raised the flap of the bandanna and spit into the street. Wagons rumbled by, and Jesse barely missed the polished hoof of a nice-looking sorrel Belgian draft. He’d seen some fine horses since he’d been here, enough to make him think about staying. But that would complicate everything. Best stick to the plan.

Jesse stretched his back again as a wagon driver spurred his team safely across the path of a passing tram only to collide into a stack of weathered rum barrels. Jesse snorted in laughter.

Jesse’s head whipped around, his hand reaching for the thirty-eight tucked into his coat’s inside pocket. The fella was a few feet away, on the curb. Jesse never saw him coming.

“Sorry, I didn’t mean to startle ya,” the bearded stranger said in an accent that made Jesse homesick. With a crooked grin, the middle-aged man raised his five-cent cigar. “Just needing a light.”

Jesse eased his hand away from the hidden revolver, chuckling nervously. How could he have been so stupid? He could’ve given himself away.

“Sure, I got me some matches hereabouts.”

He patted his pants pockets and retrieved the matchbox with a lion on it he’d picked up somewhere. As he handed it over, he noticed a boy of about ten, with dirty blond hair partly crossing one eye, tug the hand of a freckle-faced girl half his age through the crowd. The girl, her wide eyes darting from the stacks of cargo and luggage to her fellow passengers scattered along the wharf, stumbled along behind. The fella lit his cigar and took a couple of quick puffs, letting the smoke stream out from between his lips.

“Thank ya, cowboy.” The fella’s broad smile revealed a small chip in his front tooth. He dropped the canvas knapsack he’d had flung over his shoulder and handed Jesse back the matchbox. Jesse, who usually didn’t mind being compared to his namesake, suddenly felt foolish and self-consciously yanked the bandanna off his face.

“It’s the bananas, you know. The god-awful smell.” Jesse pointed above their heads.

“Never seen so many in one place, that’s for sure,” the fella commented before shouting and waving to the children above the heads of passersby. “Over here!”

“You from the States?” Jesse asked.

“Kentucky. We just arrived. These here are my children.”

The children huddled around him. The man put his arm around the little girl, inspecting a smear on the worn, frilly yoke of the girl’s dress, and then ruffled the boy’s uncovered head. “Lost your cap again, Sammy?”

The boy glanced at his feet and muttered something. Jesse, embarrassed for the boy, whose tousled, unevenly cut hair probably hadn’t been covered for days, scoured the sea of hats for the man he was waiting for.

“You sound like a Kentucky man too. Am I right?”

“I might’ve said so once,” Jesse muttered, scratching an itch on the back of his neck. He wished these folks would move on. Feeling cornered, he stepped away from the wall.

“Now, now.” Jesse cringed when the fella slapped him friendly-like on the sore muscle in his shoulder. “Once a Kentuckian, always a Kentuckian, I say.”

Jesse didn’t agree but said nothing. It wasn’t that he couldn’t give this fella a piece of his mind on the subject, but any argument on his part would only invite the stranger and his kids to stick around. And he needed to get rid of them and fast.

“Sure are, but seeing you’re not from these parts, you probably can’t tell me which one takes us closest to Morrington Hall, can you?”

Morrington Hall? A flash of anger exploded through Jesse’s chest.

“I sure in hell can!” Jesse spit out the words and instinctively reached for his gun again. The stranger squinted sideways at him, smoothing down his long mustache.

Before the fella started asking questions, Jesse added, “Trains are over there,” and pointed up the street toward the train depot. “You’ll be wanting the Rosehurst station. The big mansion is just outside town.”

“You know it? What luck,” the fella said, squeezing his arm around his little girl.

“I know it all right,” Jesse muttered, his anger seething beneath the surface.

Why’d the fella have to mention Morrington Hall? Couldn’t he have just lit his cigar and moved on? Why’d the boss have to make me wait so long? The usual alarms rang in Jesse’s head, warning him he was about to do something stupid. And as usual, he ignored them.

“You going to Stella’s big wedding too?” the boy asked.

“No, boy. I don’t care nothing about that wedding. I’ve got me a score to settle.”

It slipped out before Jesse grasped what he’d said. Damn it all to tarnation. Why did he have to go and say that for?

Jesse stared at the fella’s face, gauging his reaction, his hand drifting slowly toward his hidden revolver. The fella lifted an eyebrow, the straggly graying brown hairs on the ends curling around, almost poking the man in the eye. But instead of saying or doing something they’d both regret, the fella held out his hand.

“Well, thank ya, kindly,” he said. Jesse, relieved to be rid of him, shook it.

The fella snatched his knapsack up from the ground and touched the brim of his hat. When he moved off, he shooed his children ahead of him. They dashed away. Jesse watched the fella go.

What else could he do, shoot the fella right here? Now that would be really stupid. He seemed like a smart fella. Maybe he’d keep his mouth shut. But would it make a difference if he didn’t? No, sir. Jesse hadn’t crossed an ocean just to get cold feet.

Brushing aside the encounter, Jesse reached over into the nearest fruit bin, and with the grocer’s back turned, plucked out a crisp green apple. Propping himself against the wall with his foot, he crunched into the apple. Now this here is a real fruit. Jesse wiped the juice from his chin with the bandanna around his neck and turned his attention back to the steady stream of passengers spilling down the pier, hoping he didn’t have to wait much longer. 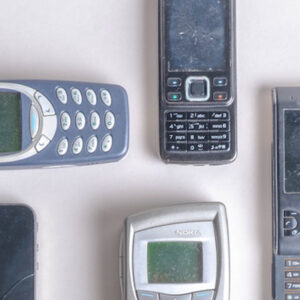 Sweden's Crime Writers and the Case of The Unregistered, Prepaid Cell Phone Sweden has a proud tradition as a country of exports. American homes are not only decorated with furniture from IKEA— their...
© LitHub
Back to top