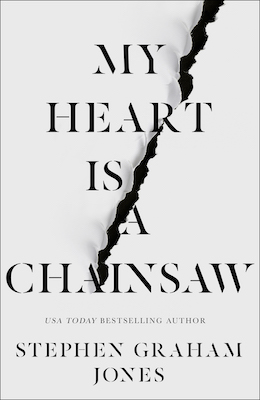 The following is an exclusive excerpt and cover reveal from My Heart is a Chainsaw, the latest work of pulpy brilliance from cult favorite Stephen Graham Jones. In the following passage, a canoeing adventure begins to go horribly wrong, and a fetid smell can't possibly bode well...

“What do you think they are?” Sven asks, nodding to the lights they don’t seem to be any closer to yet.

“Now,” Lotte corrects, still using her wispy-dreamy voice. “It’s the Indians. They’re painting their faces and their bodies for revolt.”

“Until John Wayne Gacy hears about it,” Sven says with enough confidence that Lotte has to giggle.

“It’s just John Wa—” she starts, doesn’t finish because Sven is jerking back from leaning over the side of the canoe, jerking back and pulling his hands up fast, something long stringing from it. He stands shaking it off, trying to, and the canoe overbalances, starts to roll. Instead of letting it, he dives off the other side, his Netherbits mostly hidden from the phone’s hungry eye.

He slips in almost without a sound, just one gulp and gone. 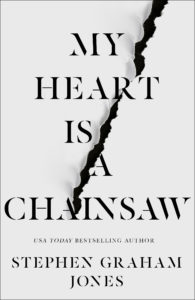 Alone on the canoe now, Lotte stands unsteadily, the back of her hand coming instantly up to her nose, her mouth—the smell from whatever stringy grossness Sven dragged in over the side.

She dry heaves, falls to her knees from it.

They’ve drifted into . . . what? A mat of algae? Lake scum? At this altitude, snow still in the ditches?

“Sven!” she calls to the blackness encroaching from all sides, now.

She covers herself with her arms, sits on her heels as best she can.

And now she knows what that smell has to be: fish guts. Some men from the town gutted a big haul of them over the side of their boat, the intestines and non-meaty parts adhering together with the congealing blood to make a gooey floating scab.

She coughs again, has to close her eyes to keep from throwing up.

Or maybe it wasn’t a whole net of fish—they can’t do that here in inland America, can they?—but one or two of the really big fish, pulled up from the very bottom of the lake. Sturgeon, pike, catfish?

Sven will know. His uncle is a fisherman.

“Sven!” she calls again, not liking this game.

Not necessarily in response to her call, probably more to do with his lung capacity, Sven surfaces maybe twenty feet to Lotte’s left.

What he’s waving over his head is the bright white lid of the little cooler.

“Come back!” Lotte calls to him. “I don’t want to see the giant fireflies anymore!”

“Mastodons!” Sven yells back, clapping the lid on the water, the sound almost unbearably loud to Lotte, like drawing attention they don’t want. She looks to the lights on the far shore to see if they’re all turning this way.

She gathers her phone-balloon, shakes the camera so it’s facing her, and says into it in perfect English, “I hate you, Sven. I’m cold and scared and when you’re asking yourself what you did wrong, why you didn’t get any in the big state of Idaho, you can play this and you can know.”

Then she wedges the phone backwards half under the canoe’s bow deck, up against the stem—the pointy hidden corner at the front where you can stuff a ziplock baggie you’ve blown up and hidden a phone inside.

What stops her from finishing is the distinct sense that someone was just standing behind her. Which would be impossible, of course, since behind her there’s only the lake. Still, she whips around to the other end of the boat, certain there was a shadow there, just in her peripheral vision, already gone.

It’s not hair, though.

If it were hair, that would mean that . . . Lotte doesn’t know: would it mean that a moose or a bear or a cowboy horse had died out here, or floated out here while dead and bloated, then burst in the heat of the day, geysering blood and gore up in a misty fountain?

The canoe thunking into something where there should be nothing tells her that’s just what it has to be.

Who gets to be a sympathetic character in The Undoing? 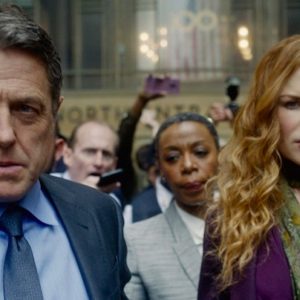 Who gets to be a sympathetic character in The Undoing? Rarely have I encountered a character more obviously fated to become a murder victim than in The Undoing, HBO’s new six-part...
© LitHub
Back to top