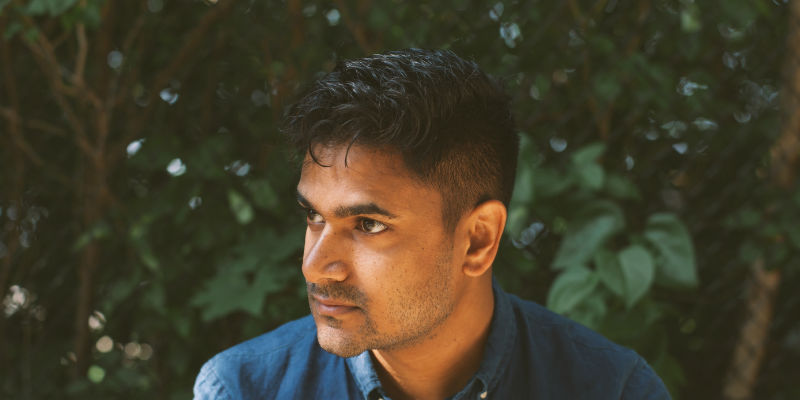 I met Naben Ruthnum (who also writes under the name Nathan Ripley) at an appropriate venue: Mysterious Bookstore in TriBeCa. Ruthnum had to sign copies of his new Nathan Ripley thriller, Find You in the Dark, a twisted serial killer novel which closely follows Sandra Whittal, the intense and devoted detective searching for a killer who’s hunting on the streets of Seattle, and a man named Martin Reese, who Whittal has dubbed “The Finder:” Reese’s hobby is digging up the remains of the victims of serial killers and anonymously reporting the burial sites to the police. Whittal is sure Reese knows more about serial killers than where the bodies are buried, particularly the activities of Jason Shurn, who was active in the early 1990s and might be responsible for the disappearance of Reese’s sister-in-law. Additionally, under his own name, Ruthnum has also recently published a gem of a book called Curry: Eating, Reading, and Race.

It turns out that doing an interview at a bookstore in the middle of the day is quite congenial. As I set up Ruthnum chatted with Tom Wickersham, Mysterious’s manager and Crime Reads contributor, about Canadian crime fiction—Ruthnum’s recommendations are Sam Wiebe and Dietrich Kalteis—then he signed a pile of books and we started talking.

Find You in the Dark is an intensely psychological novel, especially for a thriller. When I asked Ruthnum about his influences, he said, “There’d be three big ones: Thomas Harris’ Red Dragon and Silence of the Lambs really set a template for the kind of perfect dark vacuum type thriller that I wanted to write. The people that pulled me in a different direction are Patricia Highsmith who is sort of my great pure genius. I wanted to write a deeply psychological book like hers. And then, of all books, James Ellroy’s Killer on the Road.

When I tell Ruthnum I’ve read a lot of Ellroy but not that book, he described it to me: “It’s so unpleasant that I don’t really recommend it. It’s similar to Jim Thompson’s The Killer Inside Me in that you are very convincingly in that guy’s head. But, this one is far more psycho-sexual and brutal.” We discuss some of Ellroy’s foibles as detailed in his superb and unsettling autobiography, My Dark Places, in which Ellroy describes his juvenile crimes (primarily peeping at women through windows and robbing houses) and his personal obsession with crime. Ruthnum also cited Dorothy Hughes’ understated serial killer novel In a Lonely Place as an influence.

Article continues after advertisement
Reese, obviously, has put himself in the position of what you could call a post-criminal: in finding and digging up the bodies, he is helping the police.

When we start to talk in depth about the book, I mention to Ruthnum that I was impressed with the level of moral ambiguity he was able to bring to the story. Reese, obviously, has put himself in the position of what you could call a post-criminal: in finding and digging up the bodies, he is helping the police. Yet he’s also doing something really questionable: it’s frankly strange and creepy that he is so obsessed with locating and recovering the bodies of crime victims. Rather than writing a straight serial killer novel, Ruthnum drew inspiration from other sources. “I wanted to write about something that’s almost closer to true crime. Like, did the Green River Killer graphic novel — that strummed a chord, because there was so much looking for bodies in the Pacific Northwest. I thought matching that sort of realness: These dull-minded, nasty, focused on their own desires, murderers, who are not legendary, they’re just pieces of shit.” In terms of Reese, Ruthnum said he wanted to explore “the deeper psychology of someone who’s fascinated by these things and fascinated by the darkness inside himself. But he also doesn’t want to be an amoral pervert, he wants to have a life, and he wants to pretend to be the sort of person who deserves that life.”

Ruthnum has carefully considered Reese’s character, but has been surprised by readers’ responses to him. I said, “Well it’s definitely one of the conflicts at the heart of the novel, is that he’s doing what he feels compelled to do, and he thinks he’s doing the right thing. But every once in a while you see his actions from another character’s point of view and you’re like, ‘Oh, actually that’s not the right thing to do.’” Ruthnum confirmed this: “That’s how I hope it strikes readers. I think some readers just find him to be, just pretty dull, because they’re kind of on his side, which I find so fascinating. And to me, the reason that’s interesting is because there is a much darker reason for why he’s doing these things. And he isn’t necessarily the generous person that he sees himself as.”

Turning to Curry, Ruthnum and I discussed writing and identity politics. One of the tropes of the book is the idea of the “currybook,” a memoir which is deeply tied to both food and the writer’s culture of origin. He says in Curry: “my currybooks—books that signal their falseness by underlying their authenticity, and placing that authenticity in a homeland lost to time and distance.” Ruthnum’s family is from the island of Mauritius, but he was raised in a small town in western Canada. I asked Ruthnum, “Why do we expect writers who are from a certain part of the world to write about that part of the world? Especially if you are part of a diaspora?” Ruthnum said, “I think writers still face the very strange, puzzling confrontation of why don’t you write it about yourself more?”

But as Ruthnum points out, he’s less concerned about writing about Mauritius than about the world he knows.  He writes from “small town Canada,” whether he’s writing as Ripley or Ruthnum. When I ask if he always wanted to write crime fiction, Ruthnum said, “Yes, from early on. Even when I saw myself as a very serious writer, in my early twenties, when it’s very necessary to take yourself extremely seriously.” I agree that we do indeed all take ourselves seriously in our early 20s, and Ruthnum told me about how he decided to write under two names: “I invented a pseudonym when I was 14 because I wanted to write screenplays, which I do now, which is great. But I always wanted to write different things, and genre was my true love.”

So how did Curry come about? Ruthnum knew the editor of the small Canadian press which published the book, Coach House books, and she asked him if he had any essay ideas (Curry is appropriately part of a series called Exploded Views). At first, Ruthnum didn’t really have an idea worth pursuing, but some reading changed his mind. “I’d been reading books by J.G. Farrell and Paul Scott, all this weird white guy British Raj stuff about India, and then realizing, why am I still resistant to reading books by brown people about India? Then I realized I haven’t been so resistant. Since my teenage years I had started to read a lot more of these books, because I had gotten over my frankly racist assumption, that they would be the kind of currybooks that I talk about in my book. But then I realized that there is actually resistance in myself, because I feel like I am being cornered into writing a book like this, and that’s actually shut me off from an incredibly rich vein of literature. So those thoughts came into collision with Indian food, which is a vast crazy category.”

I ask Ruthnum if he sees any connection between Curry and Find, besides the fact that they are both written by him. I offer my observation, which is that both are mysteries: curry recipes are often secret spice blends handed down through generations, while the mystery in Find is pretty obvious. Ruthnum agrees. “Yeah, there is that. And I guess it’s also through the course of writing Curry and researching it, it is unfortunately me having to confront myself and really understand why we’re still resistant to these books and what kind of writer I want to be. And that’s visited upon my protagonist in Find You in the Dark. He’s no longer allowed to just gloss over the things in his life that he accepts as, ‘this is the kind of person I am this is the kind of thing I do’. I think those are threads that I’ve always been interested in pulling. Of course, in the last chapter I talk about having a pseudonym. So many of the questions I get are around that pseudonym. And I’m so glad that I’ve written Curry first because the last thing I want people to think is that I’m white facing, I’m trying to run away from what I am as a person in order to write the kind of fiction I want to. Which obviously wasn’t the case, that’s what the whole last chapter of Curry is about.” We talk about the pseudonym and Ruthnum comparing himself to someone like John Banville, who has one career writing novels and another, as Benjamin Black, writing crime fiction. I ask if Ruthnum thinks this is complicated by his ethnicity.  “I think that’s the creamy center moral message of Curry,” he says. “Please just write what you want to write and write as many different things as you want to write.”

The Girl From Blind River 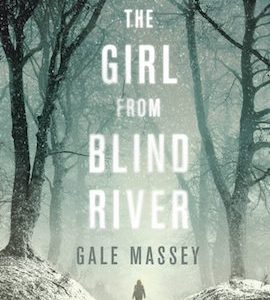 The Girl From Blind River

Jamie shielded her eyes from a gust of wind blowing down the street and crossed the dirt yard in front of her uncle’s trailer....
© LitHub
Back to top