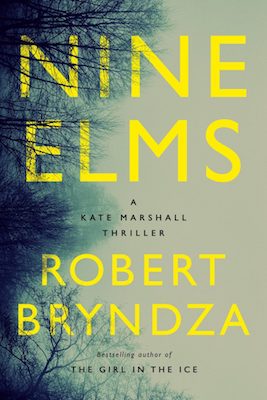 The following is an exclusive excerpt from Nine Elms, by Robert Brynzdza. Fifteen years ago, at the start of her police career, Kate Marshall caught the notorious Nine Elms serial killer. But a media circus and a shocking revelation left her career scandalized and her reputation battered. Now, a copycat killer has emerged, and Kate has the chance to redeem her first ill-fated investigation. But Kate was the Nine Elms killer’s planned next victim, and his heir would like to finish things, once and for all.

Detective Constable Kate Marshall was on the train home when her phone rang. It took a moment of searching the folds of her long winter coat before she found it in the inside pocket. She heaved out the huge bricklike handset, pulled up the antenna, and answered. It was her boss, Detective Chief Inspector Peter Conway.

“Finally. She picks up!” he snapped, without preamble. “I’ve been calling you. What’s the bloody point in having one of these new mobile phones if you don’t answer?”

“Sorry. I’ve been in court all day for the Travis Jones sentencing. He got three years, which is more than I—”

“A dog walker found the body of a young girl dumped in Crystal Palace Park,” he said, cutting her off. “Naked. Bite marks on her body, a plastic bag tied over her head.”

“Operation Hemlock. You know I don’t like that name.”

Nothing sold newspapers more than a cannibal on the loose.

Kate wanted to reply that the name had now stuck and was bedded in for life, but he wasn’t the kind of boss who encouraged banter. The press had coined the epithet two years earlier, when seventeen-year-old Shelley Norris had been found dumped in a wrecker’s yard in the Nine Elms area of South West London, close to the Thames. Technically, the killer only bit his victims, but the press didn’t let that get in the way of a good serial killer moniker. Over the past two years, another two teenage girls had been abducted, each in the early evening, on the way home from school. Their bodies had shown up several days after their disappearances, dumped in parks around London. Nothing sold newspapers more than a cannibal on the loose.

It was dark outside the train window. She looked up at the electronic display in the carriage.

“I’ll pick you up outside the station, our usual spot.” He hung up without waiting for a response.

Twenty minutes later, Kate was waiting on a small stretch of pavement between the station underpass and the busy south circular where a line of cars ground slowly past. Much of the area around the station was under development, and Kate’s route home to her small flat took her through a long road of empty building sites. It wasn’t somewhere to linger after dark. The passengers she’d left the train with had crossed the road and dispersed into the dark streets. She glanced back over her shoulder at the dank empty underpass bathed in shadows and shifted on her heels; a small bag of groceries she’d bought for dinner sat between her feet.

A spot of water hit her neck, and another, and then it started to rain. She turned up the collar of her coat and hunched down, moving closer to the bright headlights in the line of traffic.

Kate had been assigned to Operation Hemlock sixteen months previously, when the Nine Elms Cannibal body count stood at two. It had been a coup to join a high-profile case, particularly because doing so had come with a promotion to the rank of plainclothes detective.

In the eight months since the third victim’s body had been found—a seventeen-year-old schoolgirl called Carla Martin—the case had gone cold. Operation Hemlock had been scaled back, and Kate, along with several other junior officers, had been reassigned to the drug squad.

Kate squinted through the rain, down the long line of traffic. Bright headlights appeared around a sharp bend in the road, but there were no police sirens in the distance. She checked her watch and stepped back out of the glare.

She hadn’t seen Peter for two months. Shortly before she was reassigned, she had slept with him. He rarely socialized with his team, and during a rare night of after-work drinks, they’d wound up talking, and she’d found his company and his intelligence stimulating. They had stayed late in the pub, after the rest of the team went home, and ended up back at her flat. And then the next night he had invited her over to his place. Kate’s dalliance with her boss, on not one but two occasions, was something that burned inside her with regret. It was a moment of madness. Two moments, before they both came to their senses. She had a strong moral compass. She was a good police officer.

I’ll pick you up outside the station, our usual spot.

It bothered her that Peter had said this on the phone. He’d given her a lift to work twice, and both times he had also picked up her col- league, Detective Inspector Cameron Rose, who lived close by. Would he have said our usual spot to Cam?

The cold was starting to creep up the back of her long coat, and the rain had seeped in through the holes in the bottoms of the “good shoes” she wore for court. Kate adjusted her collar and huddled down in her coat, turning her attention to the line of traffic. Almost all the drivers were men, white, in their mid-to-late thirties. The perfect serial killer demographic.

A grimy white van slid past, the driver’s face distorted by the rain- water on the windshield. The police believed the Nine Elms Cannibal was using a van to abduct his victims. Carpet fibers matching a 1994 Citroën Dispatch white van, of which there were more than a hundred thousand registered in and around London, had been found on two of the victims. Kate wondered if the officers who’d been retained for Operation Hemlock were still working through that list of Citroën Dispatch owners. And who was this new victim? There had been nothing in the newspapers about a missing person.

The lights up ahead turned red, and a small blue Ford stopped in the line of traffic a few feet away. The man inside was a City type: over- weight, in his midfifties, and wearing a pinstriped suit and glasses. He saw Kate, raised his eyebrows suggestively, and flashed his headlights. Kate looked away. The blue Ford inched closer, closing the gap in the line of cars until his passenger window was almost level with her. It slid down, and the man leaned over.

“Hello. You look cold. I can make you warm . . .” He patted the seat beside him, and he stuck out his tongue, which was thin and pointed. Kate froze. Panic rose in her chest. She forgot she had her police ID card and that she was a police officer. It all went out the window, and fear took over. “Come on. Hop inside. Let’s warm you up,” he said. He patted the seat again, impatient.

Kate stepped away from the curb. The underpass behind her was dark and empty. The other vehicles in the line had male drivers, and they seemed oblivious, cocooned in their cars. The lights ahead remained red. The rain thrummed lazily on the car roofs. The man leaned farther over, and the passenger door popped open a few inches. Kate took another step back but felt trapped. What if he got out of his car and pushed her into the underpass? “Don’t fuck me around. How much?” said the man. His smile was gone, and she could see his trousers were undone. His underpants were a faded and dingy color. He hooked his finger under the waistband and exposed his penis and a thatch of graying pubic hair.

Kate was still rooted to the spot, willing the lights to change.

A police siren blared out suddenly, cutting through the silence, and the cars and the arch of the underpass were lit up with blue flashing lights. The man hurriedly rearranged himself, fastened his trousers, and pulled the door shut. Activating the central locking. His face returning to an impassive stare. Kate fumbled in her bag and pulled out her police ID card. She went to the blue Ford and slapped it against the passenger window. Annoyed that she hadn’t done it earlier.

Peter’s unmarked police car, with its revolving blue light on the roof, came shooting down the outside of the row of traffic, half up on the grass shoulder. The traffic light changed to green. The car in front drove away, and Peter pulled into the gap. The man inside the Ford was now panicking, smoothing down his hair and tie. She fixed him with a stare, put her police ID card back in her bag, and went to the passenger door of Peter’s car.

The Sixth Victim: A Murder in Small-Town Japan 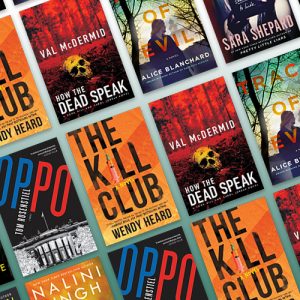 9 Books You Should Read in December At the start of every month, CrimeReads staff members look over all the great crime novels, thrillers, and mysteries coming...
© LitHub
Back to top