Nothing More To Tell 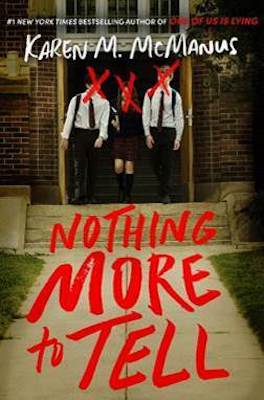 The following is an exclusive excerpt from Nothing More To Tell, by reigning queen of the YA mystery Karen McManus. In the following passage, students return to their elite private school after the summer only to find a new portrait of a recently deceased teacher vandalized.

“Brynn!” someone calls, and I turn to see Mason Rafferty standing in the second row of the auditorium seating with his hand in the air. Mason is a head taller than most of our classmates—unreasonably tall, he used to say—with longish dark curls and a gap-toothed smile. He cups his hands around his mouth to amplify his voice above the buzzing crowd and adds, “We saved you a spot.”

I catch sight of Nadia beside him and push my way toward them, happy to feel included. “Is there space for Ellie too?” I ask when we reach the row.

“Of course,” Mason says, plucking a coat off a couple of empty chairs. “Hello, Eleanor. Nice to see you again. Still tearing up the flute?”

“Hello, Mason. I don’t know if tearing up is the correct technical term, but sure,” Ellie says, and they grin at each other. Mason and Ellie have always gotten along well—queer bonding, Ellie used to say whenever I’d reminisce about him in Chicago. She was ten when we moved, and not fully aware of who she liked, but she’d always been more comfortable around Mason than any of my other friends.

While Mason and Ellie catch up, I settle in beside Nadia. “How does it feel to be back?” she asks in her faint British accent. She was born in England and didn’t come here until she was ten, after both of her parents died in a car accident and she had to move across the Atlantic to live with her aunt and uncle. They have a beautifully restored antique colonial house in Stafford, but I’m not sure it’s ever truly felt like home to Nadia. “Is everything as you remember?”

“A drag?” she asks quizzically. Mason takes the seat next to me, his coat on his lap and his long legs stretching beneath the chair in front of him.

“No, a dreg. When Ellie and I were coming inside, some boy asked us if we were”—my brow wrinkles at the memory— “an elite, or a dreg.”

Ellie leans over from her seat beside Mason. “Do people seriously call each other that?”

“Not most people, no,” Nadia says, pushing back a strand of dark, blunt-cut hair. “But Saint Ambrose has gotten a lot more . . . extreme in some ways since you left. They relaxed the scholarship standards, so we have a lot more local kids in the Upper School who aren’t quite as academically inclined. There’s some resentment between them and the wealthier students.”

“The elites?” I ask, eyebrows raised as I look between Mason and Nadia. “So which are you guys?” Nadia’s family is comfortable but definitely not wealthy, and Mason lives a few streets away from me in Sturgis. Scholarship all the way, for him.

“We’re Switzerland,” Nadia says. “And we think it’s silly. But you can’t tell that to the Colin Jeffries of the world.” Her eyes stray to look over my shoulder, and I turn to watch the same boy who accosted us on the stairs shove his way toward the back of the auditorium. “It would spoil his image of himself as unfairly maligned by the powers that be.”

Nadia inclines her head toward the entrance. “There go the top three.”

Somehow I know who I’m going to see before I actually do. It’s Charlotte, of course, as regal as a queen with her arm tucked firmly in the arm of the handsome boy beside her, who is definitely Shane Delgado. On her left is another tall, broad-shouldered boy with burnished blond hair, who I would have taken for an equally pampered private school prince if I hadn’t spent hours hanging out in his seventies-décor house. “So Tripp Talbot is elite now? Did his father win the lottery or something?” I ask, before realizing that admitting I recognize him gives away my social media stalking.

Mason smirks knowingly. “Tripp is elite by association,” he says. “The rules make no sense, obviously, but that’s dreg logic for you.”

“So great to be back,” I say, slumping down in my chair just as Saint Ambrose’s head of school, Mr. Griswell, takes his place behind a podium onstage. There’s a cloth-covered easel to his left, and a glass of water in front of him that he takes a long sip from.

Grizz’s hair has gone full-on gray, but other than that he’s exactly as I remember him: impeccably dressed with a sweater vest beneath his suit jacket, short in stature but imposing in presence, and sporting a year-round tan. “Welcome back, Saint Ambrose,” he says, leaning forward so the microphone can fully project his words in the now-hushed auditorium. “I hope your winter break was restful, and that the holidays energized you for the semester ahead. We’re thrilled to have you back, because we are, as always, stronger together.”

I tune him out as I gaze around me, taking in the familiar details along with what’s new; the soaring ceiling rafters are decorated with a few more blue-and-yellow championship banners, the plain gray curtains that used to frame the stage have been replaced with lush navy velvet, and all of our seats look freshly upholstered. Faces I once knew are starting to come into sharper focus—Katie Christo, who was a sort-of friend until she started calling me “Trippstalker” after Tripp’s gym outburst; Martina Zielinski, a straight-A student who’s probably on track for valedictorian; and Pavan Deshpande, who was my first kiss behind the science building in seventh grade.

“And there’s one last thing.” I force my attention back to Grizz as he raises his voice; the volume of chatter in the room has steadily increased as students have grown restless. “This year we mark a sad anniversary in our school’s history. It’s been nearly four years since eighth-grade teacher William Larkin died, leaving behind a rich legacy of achievement and dedication to his students. Our assistant head of school, Ms. Kelso, is heading up a committee to plan a memorial garden that will be unveiled later this spring, and I urge those of you with room in your schedules to volunteer.”

I straighten in my seat. Memorial garden committee? Oh, hell yes. That’s the perfect opportunity to get information about Mr. Larkin without being obvious about it.

Ellie leans over Mason again. “Do you have room?” she whispers. “I think you do.”

“Shut it,” I hiss as Mason tilts his head, curious.

“In the meantime,” Grizz continues, gesturing toward the easel beside him, “in our tradition of honoring distinguished faculty, we’ve commissioned a portrait of Mr. Larkin that will hang in the administrative hallway. It is my great pleasure to reveal that portrait today.” He removes the cloth from the easel with a flourish, then recoils as the auditorium fills with a loud mixture of gasps, hoots, and confused buzzing.

“What on earth?” Nadia leans forward, squinting. “What does that say?”

I’ve always had better eyesight than her. “Asshole,” I reply, staring at the bright red letters scrawled across Mr. Larkin’s face and partially obscuring his signature lemon tie.

“Oh no,” Nadia says as Grizz tries to quiet the room with booming assurances that the person responsible for such a disgraceful act will be found and punished. Mason has gone pale, as though the entire situation is making him physically sick, and I remember how much he always looked up to Mr. Larkin. “Who would do something like that?”

Ellie tugs at one of the strands of hair slipping from her bun, eyes on the stage as Grizz, still shouting, replaces the cloth. “What a warm welcome back to Saint Ambrose, huh?” she says. “Population: messed up.” 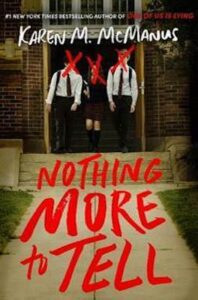 Don’t Turn My Book into a TV Series 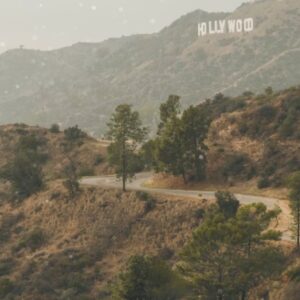