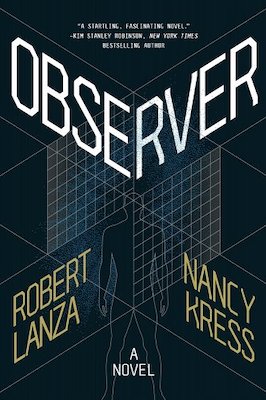 The following is from Observer, a mind-bending novel that challenges our notions of reality. Written by renowned scientist Robert Lanza and Hugo and Nebula award-winning author Nancy Kress.

Caro stared at the cables, at the mind-reading machine, at the e-fMRI.  The money being expended staggered her.   Her salary was only a miniscule fraction.  And she still didn’t know what she was supposed to do to earn it.

“Julian, if this facility is conducting clinical trials on brain function, why is it being explained to me by a physicist and a software developer?  What exactly is this a research trial of, why are there no other medical personnel here, and what does all of it have to do with ‘proving’ immortality?”

Even saying that last made Caro feel ridiculous.

“It’s an unusual clinical trial,” Julian said.  “In fact, that’s not really the right word for it.   It’s a research project, and we do have medical personnel.  Watkins, of course.  Dr. Lyle Richard Luskin, who oversees both our patients and Sam Watkins’s care.  You’ll meet him tomorrow. Your neuroradiologist and anesthesiologist will be returning shortly to the island, as will Camilla Franklin’s nursing staff.  Our former neurosurgeon, David Ernest Weeks, unfortunately drowned last month in a diving accident, but your back-up surgeon, Dr. Ralph Egan, is here.  However, he’s only temporary.”

“How were you able to recruit someone on just a temporary basis?”

Julian smiled, his long lean body leaning negligently against the bulk of the computer console, and once again she felt the tug of attraction.  He said, “Ralph is a relative of mine, but a real neurosurgeon nonetheless.  We provide our patients with excellent medical care.”

“They’re not really patients, though, are they?  They’re not ill.  They’re research subjects.”

“Yes.  Eager volunteers to make a major contribution to science, starting with but not limited to ground-breaking brain mapping.  And once you fully understand what we’re doing here and why, I think you’ll be convinced to stay.”

The same thing Weigert had said.  Before Caro could answer, the physicist pushed through the door.  Somehow, he managed to simultaneously look both wary and eager.

“Dr. Soames-Watkins, your uncle suggested I follow you to supplement Julian’s tour and explanations.  With more physics, you know, to fully illuminate your function here.”

Caro nodded, fleetingly amused to see that now it was Julian who looked wary.  She guessed what he was thinking: Weigert would talk such high-level physics that she would be unable to follow him and would be put off the research in its entirety.

“Good!  Mathematics tells us that the universe we perceive is only one of many.  Every time an observation is made—by humans, dogs, elephants—the universe holds the possibility of other branches of itself, with all other possible outcomes of that observation.”

“Yes!  You grasp it!  You see, the wave function and decoherence—”

Julian interrupted.  “I don’t think Caro needs wave functions just yet.  George, if I may?”

“Certainly,” Weigert said, although it was clear he was bubbling over with wave functions, decoherence, and probably esoteric math.  His deeply lined face glowed, and Caro felt herself warming to him.  This man loved his subject with a single-minded, uncomplicated passion she hadn’t seen in many neurosurgeons, who usually juggled surgery, rank, money, and hospital politics, not to mention coping with the emotional fall-out of unsuccessful surgeries.  At least physics did not result in someone dying.

Julian said, “As George indicated, there are many, many potential universes branching off from this one, created by observations—yes, even by elephants. I saw you startle a little at that.  George is fond of elephants.”

“We are, however,” Julian interrupted, “concerned here with universes branching off from human observations.  Each one starts out the same as ours, and then evolves on its own to include things that do not happen, or happen differently, from what we perceive as ‘our reality.’  The research we are all doing has gone on for years—or in the case of George, who formulated the theory behind the research, for decades.  We have found a way for human consciousness to enter—actually, to create—another branch of the universe.  Not the body, of course—our material selves remain here.  But consciousness enters another branch of the multiverse by altering all the algorithms hard-wired into your brain.  Those algorithms are what interpret the information coming to your brain from your senses.  Creating ‘red,’ for instance.”

“Enter another branch of the multiverse?”  Caro said.

“Create and inhabit.  Just as your brain already creates the reality of the table we discussed in the conference room.”

“How?”  Caro said, although she already had a suspicion of the answer.

“Through extensively programmed chips surgically implanted in the brain, which are connected to even more extensive programming in that computer there.”  Julian pointed to the huge metal object whose cables dangled over the cot.

“Julian, Dr. Weigert…how can you even believe that could ever work?”

“Three reasons.”  Julian watched her closely.  “First, George’s math shows that it can.  Second, altering the way the brain perceives reality is actually something we are all familiar with: in dreams, on consciousness-altering drugs, during a high fever.   Last night, for instance, I dreamed I was walking barefoot on a beach.  I could see and hear the waves, even feel the beach pebbles underneath my feet.  We dismiss dreams because they end when we wake up.  But as George said, everything we experience is only a whirl of quantum information in our brains.  Awake or dreaming, you’re experiencing the same bio-physical process.  The algorithms in my mind created that beach, those waves, the pebbles.  Those algorithms are the tools your mind uses to put everything together.  Life as we know it is observer-determined, which seems to trap us in the universe we’re familiar with.  But change the algorithms and you can create a different ‘reality.’

“And third, I know what the implanted brain chip does because I have experienced it.  I’m the only person David Weeks implanted before he died.”

Caro said, “He did what?  Implanted a computer chip in your brain?”

Before Caro could say that aloud, Weigert ventured, “If  I can just explain a little more about decoherence and collapsing the wave—”

“Later, George,” Julian said.  “Let’s allow Caro to ask all the rest of the questions I know she’s bursting with.”

But Caro didn’t want to ask more questions until she’d had a chance to formulate them with greater precision, since How can you be so deluded did not count as scientific precision.  She needed to sort  out everything she’d already heard.  How much sleep had she gotten last night?  Three hours, tops.  She was accustomed to going without sleep—no one got through med school without acquiring that ability—but this was exhaustion of a different sort: emotional, intellectual.  More than sleep, she needed to be alone to think..  Sleep, however, was a good excuse.  She said, “Actually, I’m pretty tired.”

“I can imagine,” Julian said.  “Two flights, and now all this information—let me show you to your room.”

Before she could say more, the door opened and a man entered.  It took her a moment to remember who he was: Aiden, Julian’s second-in-command, or whatever software people styled their direct reports.  “Julian,” he said, “the police are here.  I told them that Dr. Watkins is  ill, and they want to speak to whoever else is in charge.”

Julian rose.  “Okay.  Caro, George will show you to your room.  Sixth on the left, George.”  He vanished through the door.

Weigert looked at her doubtfully and said, “If you’d like just a bit more clarity on decoherence—”

And Weigert, again surprising her, went in an instant from overly erudite and possibly deluded theorist to likeable old man, and laughed.

From OBSERVER by Robert Lanza and Nancy Kress. Reprinted by permission of the publisher, Story Plant.

On Writing A Mystery That Defies Rationality 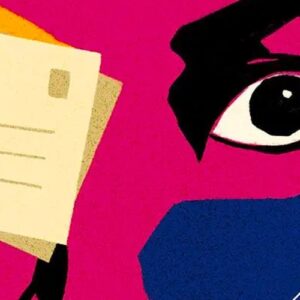 10 New Books Coming Out This Week Another week, another batch of books for your TBR pile. Happy reading, folks. * Michael Bennett, Better the Blood (Atlantic...
© LitHub
Back to top