Omar Comin! The Wire’s Creators and Stars Remember the Birth of an Icon

How a Baltimore Stick-up Artist Was Immortalized

Early on, HBO executives asked David Simon to cut a seemingly pointless scene featuring a shadowy figure named Omar, who robbed drug dealers. His presence did not seem relevant to them in moving the story along. Simon asked them to wait. The introduction of Omar, he said, would serve as a placeholder for the character when he was reestablished later in the inaugural season.

The request paid off. Television had never seen a character as full of contradictions as Omar Little, depicted brilliantly by Michael K. Williams. The role was the first major gig for Williams, a native of Brooklyn’s East Flatbush, who had dropped out of school to pursue a dancing career. Omar wore a duster and a bulletproof vest, carried a .44 Magnum, and whistled “The Farmer in the Dell” as he stalked the streets, ringing fear in the neighborhood. Yet, he nurtured out-of-luck mothers, refrained from cursing, attended church with his grandmother, and showed a caring, tender touch with his gay lovers. As inconceivable as it sounds, Omar, too, was sourced from real-life inspirations. During his days on the force, Ed Burns found that stick–up artists roamed independently and often maintained their own set of rules, while providing accurate information. He cultivated several into his best sources. Donnie Andrews, one of the primary inspirations for Omar, positively transformed his later life, becoming a consultant on The Wire.

“The guys that I knew, the Anthony Hollies, Shorty Boyd, those type of guys, they all had a code,” Burns said. “They all lived by something, and they hunted drug dealers. That’s what they hunted. Donnie [Andrews], he was ferocious. Ferdinand [Harvin], this guy was amazing. He gave me a call one time, and says, ‘You want to hit this house.’ We got a search warrant, hit the house. It’s three guys who are in their fifties. You don’t see many guys in their fifties with shoulder holsters, with .45s in the shoulder holsters, at a table. It was a substantial amount of drugs on the table, but we didn’t find all Ferdinand said was in there.

ALEXA L. FOGEL (CASTING DIRECTOR): Michael K. had auditioned for me for Oz. You keep very good records for all your auditions. I had to figure out which character it was that he had auditioned for, and I had to go back every season and go through every page until I could find him. I knew I had wrote in my notes that he had this scar, so that’s how I refound him to have him in for The Wire. He made an impression. I knew I wanted to see him again.

MICHAEL K. WILLIAMS (OMAR LITTLE): I mean, it was odd. How many people walk around with a scar in the middle of their face? It’s a very odd thing to see. When you really think about it, on my face, you know? My face got mauled over. It’s jarring.

ED BURNS (CO-CREATOR): We picked Omar, primarily, because of the scar. His first scene was him and his partner, getting ready to go do a robbery, and the guy comes and gives him a sawed-off shotgun. He takes the shotgun and—Mike was the name of the guy who gave it to him—he starts walking away, and Michael K. says, “Excuse me.” “Yes?” “How do you open this?” “It’s a fucking shotgun, Michael.” I’m standing right next to him going, “Oh God, this is going to be so bad,” And then he goes out there and it looked like when he was in his crib, his mother gave him a shotgun.

MICHAEL K. WILLIAMS (OMAR LITTLE): My contract was for seven episodes. It was guaranteed seven, and then after that, we’ll see. The direction and the development of the character happened as the character in the show went along. It served the storyline and the authenticity of the story that David was telling to take Omar out at any given time. It was clear to me that that would be the case. No one knew when Omar was going to go. No one knew. He didn’t have a trajectory for Omar. I was told that Omar would meet his demise at one point or another. I remember me being told that early on. When, how—that was up in the air. I went into every season like, Now this could be it. His trajectory wasn’t as thought out, in my belief, as maybe a Barksdale storyline or the Stringer Bell storyline.

DAVID SIMON (CREATOR): He was only supposed to be in seven [epi­sodes] of the first season. He misapprehended the idea of “And then you’re dead.” We basically only contracted for seven, and we didn’t have a pickup for another season, so I knew we weren’t going to bring him back every episode, and I think he only comes on in [Episode] Three. I don’t think he’s lying, but I’ve since seen his interviews and I’ve joked with him about it.

MICHAEL K. WILLIAMS (OMAR LITTLE): I was a deer in the headlights, full‑on in Season One.

ED BURNS (CO-CREATOR): Omar is a composite of five or six guys that were my informants who were gun slingers. Each one brought a little something to the Omar character, and it became the present character.

If you go down the street, you can still see the pock marks, the bullet holes, where they shot, and that was a true violation, because he went to visit his mother.

This guy, Anthony Hollie, he was extremely soft-spoken, very gentle, and a ferocious gunslinger. I mean, ferocious. He had a buddy that he always hung around with, who was a younger guy. That might have been in the back of my head. His buddy was beaten to death by the drug dealers, and Anthony retaliated. That scene of the body slung across the car—that’s probably how David and I came up with that, just by going over his story. Anthony and Donnie [Andrews], when they were on your side, it was a one hundred percent. It was no games. They didn’t play games. They trusted you implicitly, and I trusted them implicitly. They were solid. A lot of the other guys you would never turn your back on, but that’s how that happened.

Anthony never cursed, never raised his voice. He came out of his house one Sunday morning and there must have been six or seven guys waiting for him. If you go down the street, you can still see the pock marks, the bullet holes, where they shot, and that was a true violation, because he went to visit his mother. That was Sunday; he was supposed to have a break. Didn’t happen. They wanted him real bad, so I got him into witness protection and got him out of the city.

DAVID SIMON (CREATOR): [Avon and Stringer] are not Melvin [Wil­liams] and Chin [Farmer]. They start from that starting point, but then you’re grafting into all these different guys that you knew or heard stories about. There’s elements of [Maurice] “Peanut” King. There’s elements of Will Franklin. The characters become ten dif­ferent guys, and then the actors become themselves. They become totally somebody else. There’s no one-to-one ratio for anybody.

MICHAEL KEVIN DARNALL (BRANDON WRIGHT): I worked my first day on The Wire. It was awesome. I met Michael K. Williams and Lance Williams, who played Omar and [John] Bailey. We got along really well. I met Dominic, Sonja, and Andre, and it was really great. It was awesome, but it was really hard. Because, after that first day of work, I went home to my day job, because we had wraps so early in the day. I was telling my coworkers about this great day on set. They were asking me a million questions, and then something said, Check your voicemail. I was having this aching suspicion. I called my voicemail, and one of my close friends, actress Amanda Fields, she had left me a message. I called, and she told me that my girlfriend had passed away. So, it was like, “Holy shit.” The best day of my life was suddenly the worst day of my life.

I, of course, was frantic, and my boss said, “Go home. Take care of yourself.” I did, and the next day, I was up at five in the morning to go back to The Wire. So, that next day was not as great. I was really kind of in a daze. We filmed well into the night. We did the scene where we robbed the stash house, where Omar takes the shotgun and blows the guy’s legs away. I just remember Peter Medak, the di­rector—he was so frustrated with me. Uta, the cinematographer, she was like, “Michael, you got to slow down.” I was moving so fast, and I didn’t tell anyone but my cast members and the makeup people, Debi [Young]. So, they didn’t really know what was going on with me, but, yeah, I was completely out of it that day.

MICHAEL K. WILLIAMS (OMAR LITTLE): I think it was about two or three days on set that I had been working before I even met David. He ran up on me one night when I was wrapping, going to get my ride to go back to base camp to change, and he ran up on me and he introduced himself and he said, “Man,” his exact words, “if I’d known you guys, the three of you”—and it was Omar, Michael, the guy who played his love interest, and Lance Williams, who played Bailey—and he goes, “Man, you guys know how to make it work.” He goes, “Man, I wish I would have known in the beginning that you were going to bring it to where you were, because I would have made you kind of like my Wild Bunch.” I was like, “What do you mean Wild Bunch?” He looked at me and said, “You never watched the Western The Wild Bunch?” I was like, “No.” That was probably the first and only homework that David gave me. He told me I was to go watch The Wild Bunch and another Western because he wrote Omar’s duster, the Wild, Wild West, and the standoff with Brother Mouzone and Omar in the alleyway—those are an old-school Western thing. 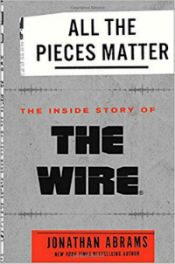 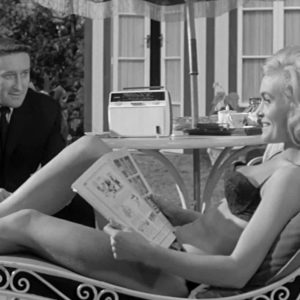 In July of 2006, at the age of 88, the last major mystery writer of the twentieth century left the building. Only a handful...
© LitHub
Back to top