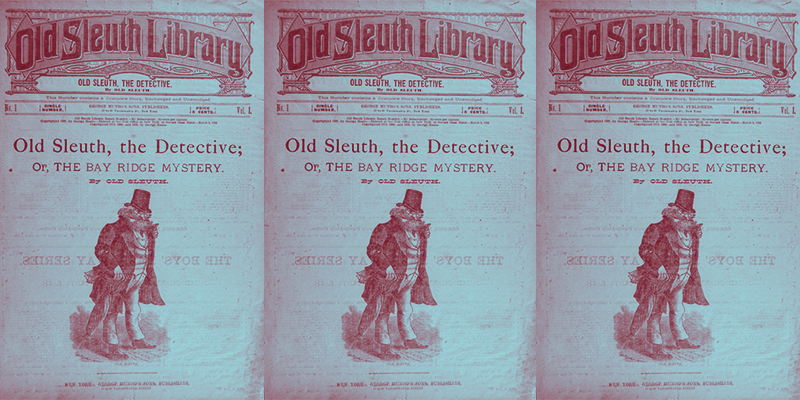 A respectable book might’ve cost a dollar, but so-called dime novels could cost even less than a dime. These sensational stories of romance and adventure were written in a direct style for the less-sophisticated working classes increasingly cramming into industrializing cities—though Abraham Lincoln and Henry Ward Beecher were also said to be fans. The books were a publishing-industry phenomenon from the Civil War to World War I, when they were superseded by even more lurid pulp-fiction magazines.

Myriad factors gave rise to the dime novel in the mid nineteenth century. Reform movements had raised literacy rates, and new technologies made printing faster, easier and cheaper. Even the switch from candlelight to gas had helped, as Americans could now more easily keep reading when the sun went down.

The first dime novels were Westerns, exploiting the popular fascination with the expanding country’s frontier and the indigenous peoples who populated it. But in the 1870s, Old Sleuth appeared, helping steer the genre toward urban detective stories, as well—something a little closer to home, appealing to the audience’s fear of metropolitan crime and desire for moral order.

The title character was not literature’s first gumshoe—Edgar Allan Poe’s “Murders in the Rue Morgue,” featuring C. Auguste Dupin, preceded it by more than three decades—but his creator seems to have been the first to use “sleuth” to mean detective. The word comes from the sleuthhound, or bloodhound, whose keen sense of smell makes it valuable to trackers. Old Sleuth doggedly follows trails of clues like a hound follows a scent.

He’s not, by the way, a sleuth—his name is Sleuth. He lives in New York City, and he’s respected by the police but operates independently; the only times he interacts with official lawmen are when they’ve apprehended him, and he needs discreetly to reveal his identity to get back on the street. He’s a master of disguise; any character in this book might turn out to be him—and often does (maybe a few too many times). One critic called him “two-fisted, handsome, brilliant, strong and tough.” He was inspired by Allan Pinkerton, who soon rushed out his own chronicles of his private-detective career to compete.

The “most important innovation developed in the Old Sleuth series was the concept of an ‘inevitable resolution,’” Gary Hoppenstand writes in The Dime Novel Detective.

When a reader selected the latest issue… that reader expected his hero to undergo a succession of tribulations. Often, Old Sleuth had to infiltrate a vicious syndicate of crime, and just as often, his disguise was penetrated by some crook. Old Sleuth then had to shoot or slug his way out of the perilous situation, and in the process, he destroyed the structure of the criminal organization. The Old Sleuth adventures presented a detective hero, the Avenger Detective hero, who could get himself out of any situation he got himself into, no matter how dangerous. Hence, the inevitable resolution. At no point did the reader see Old Sleuth doubting his abilities, and since the hero expected total success in his work, the reader expected the same. The Poe version of the Classical Detective often anticipated the solution of the mystery, yet there was never that sense of the inevitable resolution. Classical Detective fiction rarely convinced the reader that the detective hero was in total control of all circumstances. Dime novel detective fiction did.

Old Sleuth first appeared in serials around 1872, launching an empire. The copies of The Bay Ridge Mystery available today in university archives are reprints from 1885, “unchanged and unabridged,” when the tale became Vol. 1 in Old Sleuth Library, available on newsstands for five cents or by mail for six. By then, there were 101 volumes in the Library, printed densely in small type on about thirty pages of broadsheet.

Their author was Harlan Page Halsey, a businessman and member of the Brooklyn Board of Education. “He lived literally a dual life,” the society magazine Brooklyn Life reported when he died in 1898, “being known to the people of Brooklyn as a financier of undoubted ability and to the people elsewhere in the United States as ‘Old Sleuth.’ A few knew him in both capacities, but only a few comparatively. Even in New York, where he has lived all his life, not many were aware that the famous writer of detective stories was one of the leading citizens of the borough.” The Brooklyn Eagle reported he wrote more than six hundred books under various pseudonyms, earning $400,000 in royalties—in the ballpark of $16 million today, adjusted for inflation.

The Bay Ridge Mystery was probably first published around 1874, the year the waterfront in that section of Brooklyn catapulted to national prominence. For years, few news stories could mention the community without also mentioning the tale of Charley Ross, who was abducted in front of his home outside Philadelphia in July that year—the first kidnapping for ransom in American history. The case captivated the nation for months as the child snatchers negotiated by letter for the boy’s release. In December, a burglary at the home of Charles Van Brunt, on the present site of Fort Hamilton High School, on Shore Road, was interrupted by locals, and an exchange of gunfire killed the housebreakers—but not before one could confess that they were William Mosher and Joseph Douglas, Ross’s abductors. They did not reveal the boy’s location, however, and Ross was never found. (The full story is in my book True Crime Bay Ridge.) In the popular imagination, Bay Ridge was not a pastoral paradise but a shadowy spot whose dim moonlight invited intrigue. It was like the dime novel’s Wild West, recast back east.

Halsey’s Bay Ridge mystery opens on the same Shore Road, with an unlucky gambler outside a tavern who discovers a body in the water. If Halsey knew the area from experience, and not just newspaper articles, he probably had in mind the vicinity of the modern 69th Street Pier, less than a mile north from where Mosher and Douglas died, as there were few commercial establishments elsewhere on the waterfront.

Bodies routinely washed up here; one of the earliest mentions of Bay Ridge in the newspaper record concerns “an unknown man, apparently a German,” whose body appeared on the shore in July 1854 after having “been in the water about a week,” according to the Eagle. Two months later, another man drifted ashore; “both jugular veins had been separated, and the body was entirely naked,” the Eagle reported.

From Bay Ridge, Old Sleuth spreads out across old New York, from Wall Street up Broadway, even into unsettled districts with unfinished roads, and by ferry across to a sleepy Staten Island village, possibly modeled on Port Richmond. (The book is at its best here, with sustained action-adventure in the Richmond County wilds.) It provides a literary portrait of the larger city at a time when few authors chronicled its rural backwaters. Old Sleuth can be preposterously plotted and exhaustingly Victorian, with rampant sexism and occasional racism, but it’s also a unique and fascinating record of its time, providing a vivid sense of the physical landscape and the broad types who would have occupied it.

“The passing of Harlan P. Halsey…created no commotion in the world of letters,” the Washington Times reported when he died. “The literary reviews…made no mention of his death. There will be no memorial editions of his books. Perhaps there isn’t one person in a hundred thousand, outside of his own circle of personal acquaintances, who ever heard of Harlan P. Halsey.

“And yet… As ‘Old Sleuth,’ he has been the greatest producer of fiction the world has ever known.”

As one school administrator once told a reporter, “He makes more money with his pen than any other man in America!”

Let this republication serve as a kind of memorial edition, a tribute to a celebrity of his day, the once-prolific but now-forgotten Mr. Halsey—“Old Sleuth” himself. 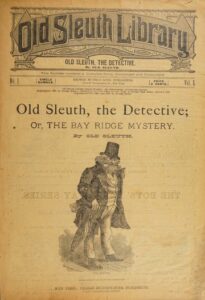 From Henry Stewart’s introduction to OLD SLEUTH, THE DETECTIVE, OR, THE BAY RIDGE MYSTERY, by Harlan P. Halsey, reissued by Henry Stewart on November 29th, 2021.

Henry Stewart is a journalist, historian and the author of several books, including True Crime Bay Ridge. 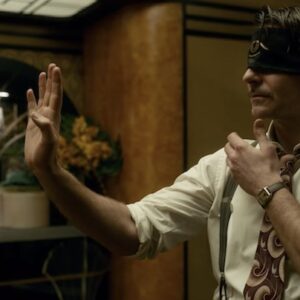 The key to pulling off a good con is to keep things moving briskly—pause for too long to collect your thoughts or give...
© LitHub
Back to top