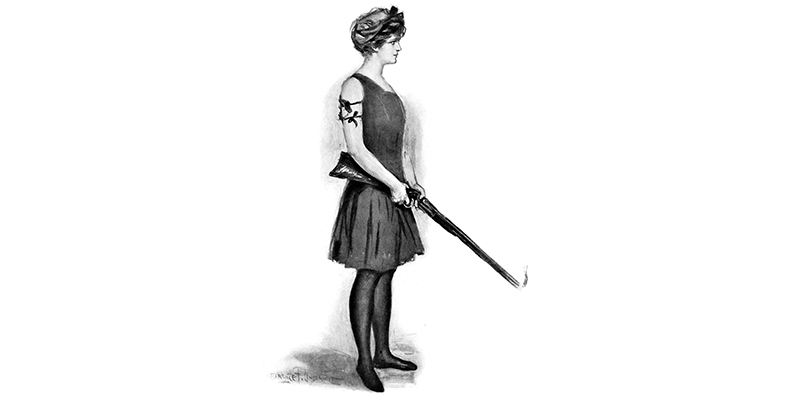 On Learning to Shoot a Gun

An author and creative writing teacher reflects on the experience of learning to shoot a rifle for research.

Valerie R folds her essay like a letter and hands it in. She’s the best writer in my night school class, a pale woman of maybe 32, bird-boned and layered in L.L. Bean. I’ve seen the wary gleam checked behind her eyes, but I don’t get it yet. She offers articulate comments on the readings, and she’s generous to the other students. Until one night when a young guy throws off some razzy putdown of women, and Valerie R turns on him. She takes him apart so fast his face still wears the goofy challenge it had when he opened his mouth. It only collapses in the silence afterward.

Valerie R’s essay defines “rape.” She chooses not to describe the act. Valerie constructs rape from the concrete detail of aftermath. A tremor that reaches her teeth. Her shocky, lunatic offer of coffee to the two policemen who answer the call. Hospital personnel who meet her eyes once and not again.

She describes packing up to leave her apartment; she can’t live there anymore. She weaves among open cardboard boxes. Forget wrapping breakables in newspaper, forget organizing. She just dumps stuff in the boxes. This methodless work goes slower than it might. Her left pinky is broken, splinted and gauzed; nevertheless, Valerie R packs left-handed. Her right hand grips a loaded .38.

When I first learn to shoot, as research, for stories and then for detective novels—it’s not .38’s but old military rifles. I have my characters: strivers mainly, blue collar outliers; one, at least, evil as a crow’s eye. But guns? I go to visit my old friend Gene. He’s a Georgia deputy sheriff who stores a dozen vintage rifles in a pine chifforobe in his living room.

He’s standing square in the middle of my vision when I walk off the plane. I know he’s glad to see me because his wide smile turns down as soon as we spot each other. Gene doesn’t like showing too much. His wife Jackie has been dead two years now. I liked Jackie. She had class and brains. She was taller than Gene, and she loved him.

When I first learn to shoot, as research, for stories and then for detective novels—it’s not .38’s but old military rifles.

Gene takes me to a gun shop where he knows Warren, the proprietor, who is dressed in a khaki safari outfit. Tall, rangy, with a cascade of freckles over bone-white skin, Warren is a gun encyclopedia. When he hears about a particular period I’m researching, he phones a local collector. By six o’clock that evening—it takes hours to transport this stuff—they will have assembled for the visiting teacher a Great War arsenal: an early Browning water-cooled machine gun complete with ammo box and belt, polished wood and brass and craft but cumbersome to move and operate. Maxim, Lewis, and Vickers machine guns; two or three ’03 Springfields, the doughboys’ rifle; a British Enfield; carbines; a 1918 BAR, really mobile by that year, needed only a two-man team; a Russian Mosin Nagant with sniper sight; a box of Mauser broomhandle pistols; a 1916 Luger—“Officer’s sidearm,” Warren will say, “dressy.”

But that is later. For now, he hands over the oldest weapon in stock, a German MP-40, a 9mm submachine gun that shoots pistol bullets.

Gene and I go into the range, push a button, watch the target zoom back. I stick on ear protectors and brace my feet as he instructs, then lean slightly forward. I squeeze the trigger and shoot it. The machine gun’s like a squirmy metal animal. I try to keep the barrel from jerking high, keep from shooting up the ceiling. It makes a corky popping, knocks against my shoulder, sound effect and sensation. Followed by visuals: Warren supplies tracers and turns out the lights. Cracking burst burst burst burst. White stitches through the dark.

And, strange, there he is, Freddie, foxholed in a bitter dusk.

My former father-in-law, five foot five and a hundred pounds, diving and dodging through the Battle of the Bulge, one of only three in his company to come back body intact. Any sharp noise and Freddie hit pavement, dove under theatre seats. His kids called him “The Nut.” Family story: Freddie raving foam-mouthed at a hapless cop ticketing his new Ford. “It was my ass hung out there for yours, you stateside SOB!” After Freddie died, his wife sent a cache of postcards to their son, card after card picturing fat-cheeked children or flirty bluebirds, postmarked 1943, 1944, 1945. Block-printed messages, like: “HOW ARE YOU TODAY? I HOPE YOU ARE PLAYING.”

Jones, a mountain tapering upward from the vast ground of his waist, grabs the M-60. I clap on the ears again, trail him in. Jones tells me this is a 50-caliber machine gun, the one they carried in Vietnam. Not Jones, he’s too young. Guys around my age. Like Gene, whom I once heard mutter under his breath that he never lost a man. “Nuh uh, not one a mine.”

Gene quit his job, took Jackie for treatment, went north, went west, finally went to M.D. Anderson, the Houston cancer fortress. The last weeks of her illness, he slept on the floor by her bed.

Jones plants his feet and fires from the chest. The sound is shattering, like we’re bombing ourselves. It’s not out in front; it’s a total atmosphere; we’re inside continuous killing explosions. Two boys who’ve been practice-firing a .22 fling up their hands and stumble from the booth. Jones sets the M-60 up on its legs and instructs me to lie on the floor. I’d rather eat a bucket of fire ants but I get down. Once I press the trigger I’m stuck to it as by centrifugal force. There’s so much blast blazing though, I can’t let go until the whole clip is gone. I’m so relieved when it’s gone. I don’t see why the back wall isn’t blown out or the roof. This whole place ought to be chunks and dust.

Sure, my detective novels have guns. But they’re mostly not the sources of power—the people are.

Jones goes off to rack the M-60. I drift over to Gene and Warren, numb, my ears cored out.

They are discussing the M-60’s grandfathers, the BAR, the Vickers water-cooled. “Hit the water-jacket, gun was out. Barrel’d melt.” Ever helpful, Warren offers this info for my notes. As if I could hold a pencil. He appraises my small frame.

“You know, BAR’s what Bonnie Parker favored. Ninety-five pounds and she fired it running backward.”

My capillaries flood. My face ignites. The bottoms of my feet buzz and I lift off the floor a couple of inches. I’ve never levitated before and it’s wondrous, this pulsing hover. Heat’s pumping off my skin. Warren elbows Gene. Gene knows.

“It’s power,” a friend smirked. “Felt powerful with that gun in your hands, didn’t you?”

Well no, I felt clumsy. An ’03 Springfield is heavy—not to bobble it is a feat—and then the sights, the elevation and windage add complication. The gun’s nature, though, that’s set and simple: it does one thing, shoots bullets, always and only the one, same thing.

While the power of characters—my invented strivers, my outliers—turns out to be various and paradoxical. They take it in their hands when they seem least able to grasp. They don’t even have to recognize power, only take it.

Sure, my detective novels have guns. But they’re mostly not the sources of power—the people are.

Power’s what holds a shattered woman in her seat in the night school class. It keeps a husband on his pallet on the floor beside his dying wife. Power pushes a father, panting in a ditch beside a shell-churned road, to clutch a pencil stub and block print hopeful postcards to the child he may not see again. 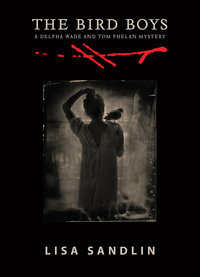 Lisa Sandlin was born in Beaumont, Texas, and grew up in oil-refinery air, sixty miles from the Gulf of Mexico. She raised a son in Santa Fe, New Mexico, then moved to Nebraska where’s she’s taught for the better part of twenty years. Her work has earned an NEA Fellowship, a Dobie Paisano Fellowship, a Pushcart Prize, the Jesse Jones Award from the Texas Institute of Letters, story-of-the-year awards from Shenandoah, Southwest Review, and Crazy Horse. Her latest novel, Bird Boys, is now available from Cinco Puntos Press. 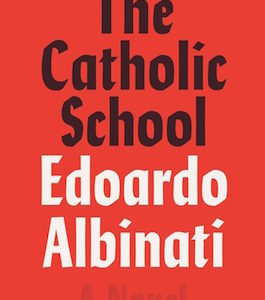 The story I'm about to tell now will clarify (or perhaps further confuse) the dynamic of an episode described many pages...
© LitHub
Back to top