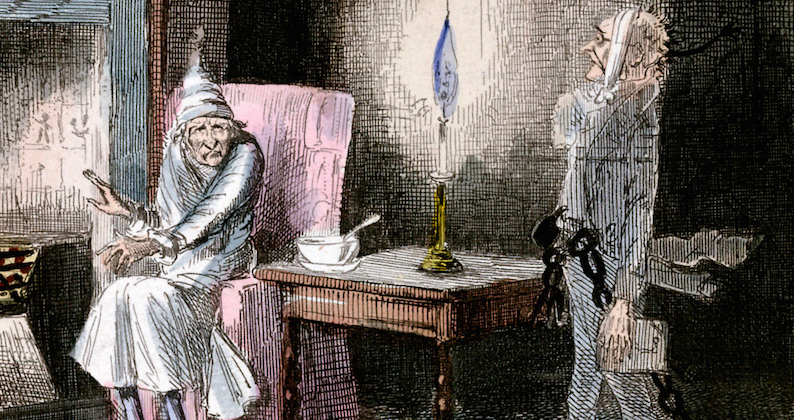 A Christmas Carol is the main vestige of this pastime, but it was once one of the most hallowed ways to celebrate the winter season

Remember how Andy Williams sings about how “they’ll be scary ghost stories and tales of the glories of Christmasses long, long ago?” when describing what the Christmas season will be like, in his 1963 song “It’s the Most Wonderful Time of the Year?”

The song, written by Edward Pola and George Wyle, is referencing a nineteenth-century (mostly British) pastime of telling spooky stories to crowds of family and friends on Christmas Eve, a fad that largely died in the beginning of the twentieth century. But in the 1800s (and even earlier), this festive pastime was widely beloved. To modern readers, only one vestige of this tradition remains: Charles Dickens’s 1843 story A Christmas Carol, about how an old, cold-hearted miser is visited on Christmas Eve night by three ghosts who reveal to him the ways in which he has squandered his life and legacy.

Colin Dickey notes, in The Smithsonian Magazine, that the tradition of telling ghost-stories on Christmas Eve is largely English; the Puritanical culture of early America fairly dismissed this perceived-occult pastime. But Dickey assembles several primary sources dating back to England’s Early Modern period that confirm the longstanding appreciation for telling eerie tales on chilly winter nights. In Christopher Marlowe’s 1590 play The Jew of Malta, the protagonist Barabbas notes “Now I remember those old women’s words/ Who in my wealth would tell me winter’s tales/ And speak of spirits and ghosts by night.” And in Shakespeare’s 1611 play The Winter’s Tale, a character suggests some storytelling with “A sad tale’s best for winter. I have one. Of sprites and goblins.”

Still, no one turned it to an explicitly Christmastime staple until Charles Dickens. A Christmas Carol, or, to call it by its full title, A Christmas Carol in Prose, Being a Ghost Story of Christmas, was not Dickens’s only holiday ghost story, just his first. In the 1850s, he edited a popular magazine called Household Words, and after 1859, another called All the Year Round, whose Christmas editions regularly featured ghost stories, many written by him and his protege Wilkie Collins. His contributions to the long cultural pastime of wintertime scary-storytelling turned the Christmas ghost story into a motivated genre, rather than a ubiquitous instance of seasonal folklore.

Nearly fifty years later, in 1891, as mentioned by Dickey, the humor-writer Jerome K. Jerome noted, “Whenever five or six English-speaking people meet round a fire on Christmas Eve, they start telling each other ghost stories. Nothing satisfies us on Christmas Eve but to hear each other tell authentic anecdotes about spectres. It is a genial, festive season, and we love to muse upon graves, and dead bodies, and murders, and blood.”

In 1843, Dickens had been inspired to write A Christmas Carol after reading an account, published that same year, detailing the conditions of child labor in Britain. Dickens, a former child-laborer himself, was a passionate defender of childrens’ right to be children. Incensed, he penned a story about a greedy cheapskate who is transformed into a philanthropist, inspired and honored to donate his money and resources to those in worse conditions (especially children in need). Hoping the story would have a positive social effect, he wrote in the preface, “I have endeavoured in this Ghostly little book, to raise the Ghost of an Idea, which shall not put my readers out of humour with themselves, with each other, with the season, or with me. May it haunt their houses pleasantly, and no one wish to lay it.”

But Dickens also needed A Christmas Carol to be a success, because he already had amassed a large debt with the publisher Chapman and Hall. It makes sense that Dickens made his story a ghost story, of all things, to capitalize on the appetite for such stories around the holidays. When the book was released on December 19th of that same year, in a gorgeous edition with lavish, colored illustrations by John Leech, it sold out its entire 6,000 print run in just a few days. (Though, the expenses it took to produce such a volume meant Dickens did not actually make as much as he had hoped.) The appearance of a pirated version the following year confirmed the demand for his spooky, reflective novel (as well as sent Dickens to court in what would be an extremely tedious and expensive copyright case).

Dickens and his writers produced tons of Christmas ghost stories for his periodicals. Many have morals rather like A Christmas Carol, while others, like “The Signal-man” from 1866, are just plain horror. After Dickens ceased writing holiday Christmas stories in 1868, many other writers took up the task.

Towards the end of the century, a young M.R. James, who would become a famed writer of spooky tales and the eventual provost of King’s College, Cambridge, took up the mantle passionately. Colin Fleming writes in The Paris Review, “His thing was to write a tale for Christmas, invite some of his fellow Eton dons and favored students into his rooms, and read it over candlelight after everyone had been plied with eggnog. Readings for the season—but not really of the season.”

But once Dickens stopped writing Christmas ghost stories, things weren’t the same. William Dean Howells noted in Harper’s in 1886, that, Dickens’s own humanistic motivations gave the Christmas ghost story its true purpose; without him, they were nothing more than tales to shock and scare, as they had been before Dickens. “The ethical intention which gave dignity to Dickens’ Christmas stories of still earlier date has almost wholly disappeared.” While this was happening, Dickey notes in his article, the American holiday of Halloween began to gain cultural traction (brought over by Irish and Scottish immigrants), eventually but permanently shifting ghoulish content to the autumn.

Still, towards the end of the nineteenth century, ghosts were everywhere. Christmastime ghost stories arose in conjunction with an growing cultural interest in Spiritualism. New technologies (such as photography) and a growing middle-class which brought people from crowded homes into emptier, bigger ones, all provided opportunities for Victorians to ruminate about spirits lurking about. Ghost photography, in which artists would manipulate light and images to suggest that their cameras had captured visitors from the beyond, became a fad. By the end of the nineteenth century, ghost stories had become so popular that they seemed unavoidable and unoriginal. In her the 1887 story “The story of the Rippling Train,” the writer Mary Louise Molesworth had a character complain, upon learning of the presence of a ghost, “One hears nothing else nowadays.”

(Every year, the small press Biblioasis releases a small collection of classic holiday ghost stories, all illustrated by SETH: check them out here.) 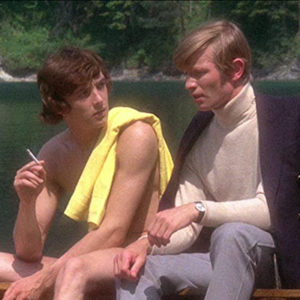 “They only approve of murderers and perverts. Which are you?” “Both.” —Lotte von Ornstein (Jane Carr) converses...
© LitHub
Back to top