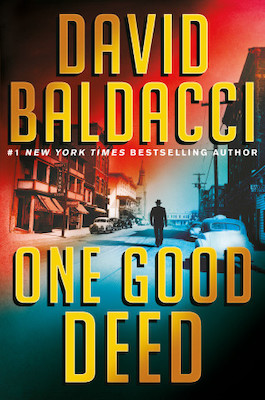 The following is an exclusive excerpt from One Good Deed, the latest pulse-pounding thriller in a brand new series from David Baldacci. Aloysius Archer is a WWII veteran who has been released from prison, and quickly begins breaking his parole's laundry list of rules and regulations. When he gets a job collecting an owed debt, a body turns up; he has to track down the murderer before he’s convicted of a crime he didn’t commit.

Archer got off at Poca City seven hours later and too many stops in between to remember. People had gotten on and people had gotten off. They’d had a dinner and bathroom break at a roadside diner with an outhouse in the back, both of which looked only a stiff breeze away from falling over. It was nearly eight in the evening now. He stood there as the bus and the rube with too many queries and the remaining nervous folks clutching all they owned sped off into the night chasing pots of gold along dusty roads with nary a helpful leprechaun in sight.

Good riddance to them all, thought Archer. And then, a second later, his more charitable consideration was, Well, good luck to them.

We all needed luck now and then, was his firm belief. And maybe right now he needed it more than most. The point was, would he get it?

Or will I have to make my own damn luck? And hope for no bad luck as a chaser?

He put on his hat and then his jacket and looked around. He was in Poca City because the DOP said it was here he had to serve his parole. He dragged out the pages he’d been given. In fat, bold typeface at the top of the page was “Department of Prisons,” or the DOP. Below that was a long list of “don’ts” and a far shorter list of “dos.” These rules would govern his life for the next three years. Though he was free, it was a liberty with lassoes attached, with so-called legal conditions that he mostly could make neither head nor tail of. Who knew prison could stick to you, like running into a spider’s web in the morning, flailing about, just wanting to be free of the tendrils, while alarmed that a poisonous thing was coming for you.

Archer had been released from prison well before he served his full sentence due to time off for good behavior and also for passing muster at his first parole board meeting. He had ventured into the little stuffy room that held a flimsy table with three chairs behind and one chair in front and him not knowing what to expect. Two burly prison guards had accompanied him to this meeting. He had been dressed in his prison duds, which seemed to shriek “guilt” and “continued danger” from each pore of the sweat-stained fabric.

Behind the table were three people, two men and one woman. The men were short and stout and freely perspiring in the closeness of the room. They looked self-important and bored as they greedily puffed on their fat cigars. The woman, who sat in the middle of this little band of freedom givers or takers, was tall and matronly with an elaborate hat on which a fabric bird clung to one side, and with a dead fox around her blocky shoulders.

Archer had instantly seized on her as the real power, and thus had focused all of his attention there. His contriteness was genuine, his remorse complete. He stared into her large, brown eyes and said his piece with heartfelt emphasis contained in each word, until he saw quivering at the corners of those eyes, the false bird and fox start to shake. When he’d finished and then answered all her questions, the consultation among the board was swift and in his favor as the men quickly capitulated to the woman’s magisterial decree.

Article continues after advertisement
We all needed luck now and then, was his firm belief. And maybe right now he needed it more than most. The point was, would he get it?

And that had been the price of freedom, which he had gladly paid. The Derby Hotel was where the DOP said it would be. Point for those folks, grudgingly. Its architecture reminded him of places he’d seen in Germany. That did not sit particularly well with him. Archer hadn’t fought all those years to come home and see any elements of the vanquished settled here. He trudged across the macadam, the collected heat of the day wicking up into his long feet. Though the sky was now dark, it was still cloudless and clear. The air was so dry he felt his skin try to pull back into itself. Archer also thought he saw dust exhaled along with breath. A pair of old, withered men were bent over a checkerboard table incongruously perched in the shadow of a large fountain. The thing was built principally of gray-and-white marble with naked, fat cherubs suspended in the middle holding harps and flutes, and not a drop of water coming out of the myriad spouts.

With furtive glances, the old men watched him coming. Archer shuffled along rather than walked. For long distances in prison, meaning longer than a walk to the john, you had your feet shackled. And so, you shuffled along. It was demeaning, to be sure, and that was the whole purpose behind it. Archer meant to rid himself of the motion, but it was easier said than done.

He could feel their gazes tracking him, like silent parasites sucking the life out of him at a distance, him in his cheap, wrinkled clothes with his awkward gait.

Prison stop. Look out, gents, ex-con shuffling on by.

He nodded to them as he and his filthy shoes grew closer to the cherubic fountain and the bent checker-playing men. Neither nodded in return. Poca City apparently was not that sort of place.

He reached the harder pavement in front of the hotel, swung the front door wide and let it bang shut behind him. He crossed the floor, the plush carpet sucking him in, and tapped a bell set on the front desk. As its ringing died down, he gazed at a sign on the wall promising shined shoes fast for a good rate. That and a shave and a haircut, and a masculine aftershave included.

A middle-aged man with a chrome dome and wearing a not overly clean white shirt with a gray vest over it and faded corduroy trousers came out from behind a frayed burgundy curtain to greet him. His sleeves were rolled up and his forearms were about as hairy as any Archer had ever seen. It was like fat, fuzzy caterpillars had colonized there. His nails could have used a scrubbing, and he seemed to have the same coating of dust as Archer.

“Yes?” he said, running an appraising glance over Archer and clearly coming away not in any way, shape, or form satisfied.

“Figgered that. Rates on the wall right there. You okay with that?”

The man gave him a look while Archer felt for the wrinkled dollars in his pocket.

The man put out his hand and Archer passed him the money. He put it in the till and swung a stiff ledger around.

The law seemed to be everywhere these days.

Archer reluctantly took up the chubby pen the man handed him. “What’s the address of this place?”

“Because that’s my current address, is why.” The man harrumphed and told him.

Archer dutifully wrote it down and signed his name in a flourish of cursive.

The man eyed the signature upside down. “That’s really your name?”

“Why? You mostly get Smiths and Jones here with ladies on their arms for short stays?”

“Yeah, I know, you’re all class. Like the naked babies set in marble outside.”

“Look it, where you from?” said the man, a scowl now crowding his face.

The man slid open a drawer and pulled out a fat, brass key. “Number 610. Top floor. Elevator’s that way.” He pointed to his left.

As Archer started off, the man said, “Wait, don’t you have no bags?”

“Wearing ’em instead of carrying ’em,” replied Archer over his shoulder.

He took the stairs, not the elevator. Elevators were really little prison cells, was his opinion. And maybe the doors wouldn’t open when he wanted them to. What then?

One thing prison took away from you, hard and clear, was simple trust.

He unlocked the door to 610 and surveyed it, taking his time. He had all the time in the world now. After counting every minute of every hour of every day for the last few years, he no longer had to. But still, it was a tough habit to break. He figured he might actually miss it.

He checked the bed: flimsy, squeaky. His in prison had been concrete masquerading as a mattress, so this was just fine. He opened a drawer and saw the Gideon Bible there along with stationery and a ballpoint pen.

A man in his position could not afford to be choosy. Or withholding of his desires.

He took off his jacket and hung it on a peg, placing his hat on top of it. He slipped out his folding money. He laid the bills out precisely on the bed, divided by denomination. There was not much there after he’d laid out the dough for the room. The DOP had been stingy, but in an effective way.

He would have to work to survive. This would keep him from mischief. He wasn’t guessing about this.

Archer took out his parole papers. It was right there in the very first paragraph.

Gainful employment will keep you from returning to your wayward ways, and thus to prison. DO NOT FORGET THIS.

He continued running his eye down the page.

First meeting was tomorrow morning at nine a.m. sharp. At the Poca City Courts and Municipality Building. That was a long name, and it somehow stoked fear in Archer. Of rules and regulations and too many things for him to contemplate readily. Or adhere to consistently.

He opened his window for one reason only. His window had never opened in prison. He sucked in the hot, dry air and surveyed Poca City. Poca City looked back at him without a lick of interest. Archer wondered if that would always be the case no matter where he went.

He lay back on the bed. But his Elgin wristwatch told him it was too early to go to bed. Probably too late to get a drink, though number 14 on his DOP don’t list was no bars and no drink. Number 15 was no women. So was number 16, at least in a way, though it more specifically referred to no “loose” women. The DOP probably had amassed a vast collection of statistics that clearly showed why the confluence of parolees and alcohol in close proximity to others drinking likewise was not a good thing. And when you threw in women, and more to the point, loose women, an apocalypse was the only likely outcome.

Of course, right now, he dearly wished for a libation of risky proportion.

Archer put on his jacket and his hat, scooped up his cash, and went in search of one.

And maybe the loose women, too.

A man in his position could not afford to be choosy. Or withholding of his desires.

On his first day of freedom he deemed life just too damn short for that.

From ONE GOOD DEED. Used with the permission of the publisher, Grand Central. Copyright © 2019 by David Baldacci. 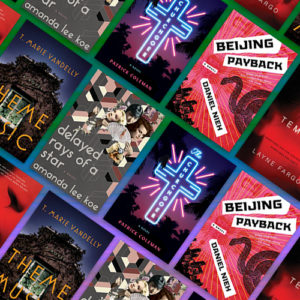 July's Best Debut Crime Novels and Thrillers Breaking into the crime game isn’t easy, but every month, a few brave and talented souls make a go of it. For readers,...
© LitHub
Back to top