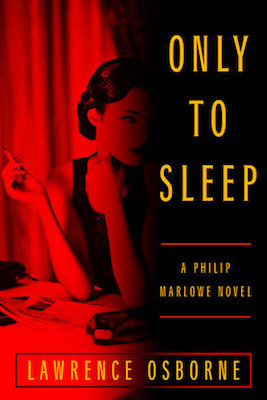 The following is an exclusive excerpt from Only To Sleep, a new continuation of Chandler’s iconic character of Philip Marlowe that takes the character into the late 1980s, from acclaimed author Lawrence Osborne. In the following passage, Marlowe investigates a suspicious insurance claim while exploring San Diego.

One dry morning a few days later I drove up to San Diego and checked into a little hotel I knew in Hillcrest that long ago used to be charming. Now, like all things, it had faded and was preserved merely by failure. I got a kick out of being near Balboa Park and the rattle of gang violence late at night. The barbarians were not only at the gates, but well and truly inside them, confident and getting bolder by the day. In the evening I made my way down to Casa de Pico on Juan Street in Old Town, where I could devour a few suizas to the sound of a mariachi band with their ponderous double basses and silver-embroidered sombreros. It was a sad scene but I liked it. Everything familiar has its merits, just like everything sad.

I got a little booze high that night and had to be escorted back to my car by the gentlemen of the establishment, who were also wearing spangled sombreros. I assured them that I could drive back to my hotel, which was not far. But in the end I had to sober up leaning on the hood and it was a while before I could drive at all. At the hotel I fell into bed and lay there fully clothed, full of demonic premonitions. It sometimes happened when I went back to the booze, and I went back to it as soon as I was alone in America and not with my housekeeper and regulars in Mexico. It was as if the lights went out and in the darkness I crawled about, secretly delighted and ravished. Drinkers never learn the antidote. Our way of surviving is just to succumb once in a while.

The following afternoon I went to the Méridien. Since the Zinns went there frequently I figured the staff there would remember them and be able to tell me something about them.

The following afternoon I went to the Méridien. Since the Zinns went there frequently I figured the staff there would remember them and be able to tell me something about them. Maybe they argued in public, maybe Zinn went there sometimes by himself and met associates. Everything happens in restaurants. The hotel stood on the Coronado side of the bay surrounded by landscaped gardens and pools upon which silent swans and teal sat as if tranquilized. Its terraces looked out over the downtown towers; below it, on the Coronado shore, other restaurants would light up at night, great glass cages flickering with candles and set on the beach. It was a maze of waterfalls, bubbling streams, and blue lagoons. The new world. The Marius restaurant, though, had no windows. It was intimate and slightly suffocating, a place for more secretive rendezvous, decorated with beige limestone floors and honey-glazed walls. The manager was surprisingly helpful. I showed him my photograph of the Zinns and asked if he could find a reservation the couple might have made. It turned out they had been in some months earlier, and he showed me the reservation himself. I asked if he remembered them.

“Monsieur Zinn?” he said. “He was a frequent guest. He came every week almost. They always ordered a Pomerol.”

“Was he a heavy tipper?”

“I cannot think of anyone who tipped more heavily, as you say.”

“Did they ever have an argument in public?”

He said he had never seen one. They were very private, they always sat by the wall, and they were always alone. They liked the restaurant, one of the waiters told him, precisely because it had no windows.

“Did he ever meet anyone else here?”

“He came midweek sometimes and had lunch with gentlemen. Never ladies. Sometimes they left together.”

“What kind of gentlemen?”

I’d forgotten he was too young to understand the reference, and I had to laugh off the gaffe.

“I’m sorry, I mean girls. The loose kind. That’s what we called them back in the day.”

I walked around the absurd hotel afterward, thinking how it might suit a man like Donald Zinn and how much he must have liked it. I was trying to understand his world, but in reality I already knew it. There were hundreds of Donald Zinns trapped inside hundreds of similar lives. They were no different from the swans and teals imprisoned within the landscaped gardens. Except that Donald was a black swan.

After lunch in the hotel I drove down to his abandoned house.

Coronado Cays lay in a place called Silver Strand to the south of Coronado itself in the direction of Imperial Beach. It was a series of quaint villages with West Indian architecture built around an artificial lagoon. The townhouses had their own mooring docks and each one had a yacht parked outside. Zinn’s included. There was a guard at the gate decked out in a white jacket and pith helmet, Bermuda-style, and the units had blue limestone shake roofs on chalk-white walls and arched Antiguan windows. There was a clubhouse with a gold-and-white-striped hip roof and a weather vane, and the Zinn residence was on a piece of the lagoon called Green Turtle.

Before their offices closed for the day, I stopped in at the Cays Homeowners Association and coolly asked how much a Green Turtle beauty might cost me. About three quarters of a million. It was useful to know. There was a lot of Japanese money pouring in, they admitted, and the Cays were the chicest address on the water now. Given how ugly it was, there was no reason to doubt it. I parked in front of the Zinn place and went up to his door. The insurance men had given me a key. A hand-fired tile set into the wall showed both his name and the number of the unit. I let myself in and found myself in a long front room hung with silk curtains with eighteenth-century indigo patterns. It was obvious that the people from the bank had been there and that they had done an inventory. There were little tags on some of the handsome antique pieces.

It was the house of a man both used to money and anxious not to lose it.

It was the house of a man both used to money and anxious not to lose it. I went upstairs and looked through the three bedrooms. On the mantelpieces were framed photographs of the couple, one at a polo field and another at a restaurant in Paris. Such are the interchangeable decors of the materially fortunate. The wardrobes were still packed with his splendid clothes. The velvet smoking jackets, the Huntsman suits, the shirts from Rome (or Horton Plaza). I sat in one of the velvet chairs, which seemed to match the jackets, and wandered through a bathroom with white shutters. It was as if they had walked out the day before and would be back for tea.

But it was all, of course, built on debt. That was the key fact about the Zinns: they borrowed and they never paid back. Paying back is for crumbs and heels. It’s the art of mirrors.

My last stop was the offices of Zinn’s company, Desert Blooms, in Del Mar. It lay on a street called Camino Real, filled with tree-shaded compounds and elegant developments, and all around it were the lush San Diego canyons bursting with flame vines. Del Mar was a favorite Mafia hangout because of the racetrack and the seafront hotels, and in the fifties at least, it had been a place where the caporegimes liked to play. I remembered it well, and not particularly fondly. I played a few blackjack tables there myself back in the day. But now it had moved up in the world, or down, depending on how you looked at it. I found the building where Desert Blooms was located and went up to the first floor. There, sure enough, were the glass doors with the company’s logo, but behind them all was mothballed. The office had closed down, and rather recently as far as I could tell. It didn’t mean that they were out of business, but they were no longer on Camino Real. A stack of sealed boxes stood on the former reception desk.

I took a few photos of the closed office and went back down to the street, where nothing awaited me and nothing was to be found. His widow must have wrapped up his affairs swiftly and sold everything that could be sold. She was a wonder of efficiency. Now I understood why Pacific Mutual had gotten the shivers, even though there was nothing they could put their finger on.

Excerpted from ONLY TO SLEEP. Copyright © 2018 by Lawrence Osborne. Published by Hogarth, an imprint of Penguin Random House LLC. 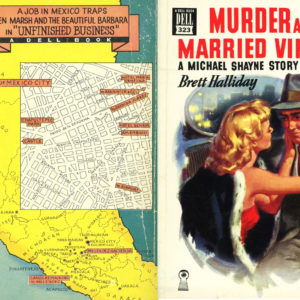 Dell Mapbacks: A History Ever since the 1930s and the advent of the “paperback revolution” in English-language books, publishers have sought to make...
© LitHub
Back to top