Detective fiction and therapy have more in common than you think.

“Tell me about the lambs, Clarice,” easily identifiable as a quote from a compelling conversation in The Silence of the Lambs between FBI agent Starling and psychiatrist Hannibal Lecter, is a phrase that wouldn’t be out of place in everyday therapy. That’s because even while locked in a secure unit for his highly unorthodox therapeutic practice, the doctor is still working, picking up on the small clues about his visitor: her shoes, her handbag, the lilt in her accent she’s fought hard to suppress, things that tell him she’s “one step removed from poor white trash.” The psychiatrist proposes an exchange of information, a quid pro quo. He’ll give her information to solve the crime, if Starling gives him information about herself. We learn that Clarice’s ambition is driven by childhood trauma, the murder of her father when she was ten years old, and then, when on a relative’s farm, her desperate attempts to save lambs from being slaughtered. There’s a link between her inability to save things in the past, to her desperate need to save the life of the kidnapped woman in the present. The therapist Dr. Lecter is operating like a detective, using his skill to quickly determine both what motivates her, and what’s at stake.

Of course, Lecter was not the first fictional detective to use the past and the unconscious to understand human motivation, and in real life, the links between detective work and therapy go way back. There’s no doubt the case studies of Sigmund Freud, the father of psychoanalysis, make for gripping reading, as he pieces together clues, like small pieces of a human jigsaw—no surprise given Freud was a fan of detective stories himself.

So what exactly is the resonance between therapy and detective work, and how might it explain our fascination with both, on screen and on the page?

Detective work is all about constructing a narrative. There is a mystery to unravel and a crime to solve. In therapy, creating the narrative of a person’s life also plays a huge part, but the focus is on the issue or problem to resolve. At its heart, therapy is about mystery. Why has the problem arisen? What’s the meaning of the problem in this person’s life right now? How do we use the context of an individual’s life to solve that problem?

In police detective work, evidence needs to be assembled: forensic data, facts, DNA, timelines and fingerprints. Proof is required to uncover the truth and solve the mystery or crime. A psychotherapist also assembles “evidence,” but of a different kind—based on what a client says, or doesn’t say, on their body language, information about their past, as well as associations and dreams. It is not the job of a psychotherapist to fact-check; the truth, in therapy, emerges from the conversation between two people in the room. It relies on strict boundaries and in particular, on the transference, the relationship between these two people, a place where a client can project and explore significant relationships and emotions from the past. But in the same way, there is a forensic attention to detail inherent in the work.

At its heart, therapy is about mystery. Why has the problem arisen? What’s the meaning of the problem in this person’s life right now?

As with Clarice Starling, the best and most memorable detectives in fiction are those that are haunted by the ghosts of their past—they are driven by this, and may bend the rules to get the results they need. In crime fiction and psychological thrillers, there are increasing representations of generic psychologists who offer astute insights to the unfolding drama, but are also frequently seen to deviate from professional boundaries. They often turn up at client’s houses, or break confidentiality by chatting to relatives, or, like Berger, in Ordinary People, takes his client for breakfast in a cafe—and, at even more of a stretch, as with Lowenstein in A Prince of Tides, develops a romantic attachment to her client. While all of these things might work for the plot, they do stretch the limits of professional credibility.

Most often in detective fiction, therapy is used as a plot point, rather than something to be explored in its own right. In writing my novel A Good Enough Mother, I was interested in depicting a more authentic portrayal of therapy and in taking readers on a real psychological journey by using aspects like transference, the relationship between therapist and client, and the importance of boundaries to underpin the drama of the narrative. I believe the ongoing fascination with therapy in fiction is partly because it’s such a private world; just two people talking in a room. There’s both an intimacy and secrecy to that relationship. In my book, set in a trauma clinic, people come in feeling desperate, and hope their lives will change for the better. In a similar vein to interviews in police procedurals, I set out to open a window into this world of therapy, and the reader becomes a fly on the wall, simultaneously party to and full of the anxieties and struggles of my therapist character, as she becomes caught up in the claustrophobia of the transference relationship.

People are endlessly fascinated by other people’s lives, as we have seen by the success of non-fictional accounts such as An Examined Life, where the case studies read like exquisite short stories. However, I believe the interest is more than simply curiosity, I think people want to “listen in” to learn about what makes people tick, in order perhaps to apply the wisdom and learning to their own lives.

In my character Dr Ruth Hartland, I also introduce the concept of the “wounded healer,” people who are drawn to the caring or helping professions precisely because of their childhood or past experience. It can also be the very thing that makes a clinician more empathetic or more intuitive, but it can also lead to pitfalls over professional boundaries. This is the trigger to my novel, when Ruth is referred a new client who looks strikingly like her missing son Tom. On account of her grief, she is compelled to continue seeing him, leading to the blurring of her personal and professional boundaries, which ultimately results in a tragedy.

In detective work, lives are often at stake. But in therapy, this can also be true—the symbolic life of a client is at stake. It is the job of both detective and therapist to use their different skills and techniques to do whatever they can to “save” that life.

Bev Thomas was a clinical psychologist in the NHS for many years. She currently works as an organizational consultant in mental health and other services. A Good Enough Mother is her debut novel. She lives in London with her family. 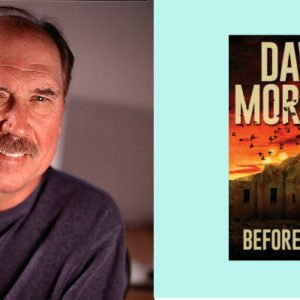 David Morrell is an acknowledged master of the suspense/thriller genre of storytelling. His iconic protagonist of First Blood,...
© LitHub
Back to top