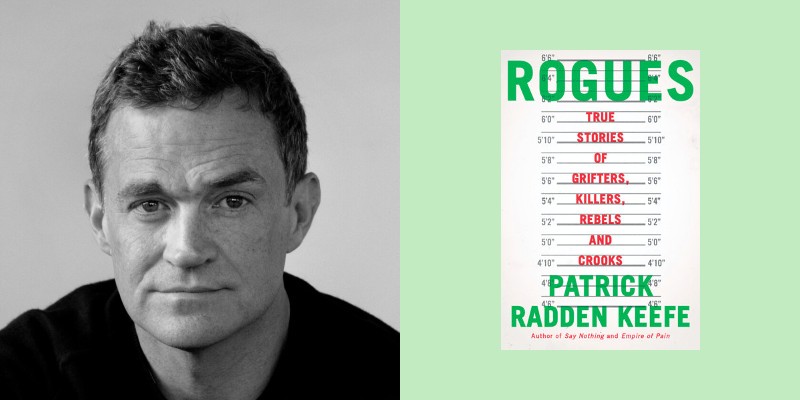 Patrick Radden Keefe on Secrets, Lies, and the Murky Line Between Licit and Illicit

"What gets blessed? Who gets out of jail free? And who doesn’t?...I’m interested in that murky netherworld..."

Near the end of his enthralling 2019 book Say Nothing: A True Story of Murder and Memory in Northern Ireland, Patrick Radden Keefe recalls the frustration he felt while trying to solve a cold case that had stymied detectives for almost fifty years. His main concern? That those who knew “the whole truth of this dark saga”—the 1972 kidnapping and murder of Jean McConville, a Belfast mother of ten—“would take it with them to their graves. Then, just as I was completing the manuscript, I made a startling discovery.” His digging essentially solved the case.

If Say Nothing confirmed that he’s among the finest true-crime storytellers working today, Keefe’s new book suggests he won’t soon relinquish that status. Rogues: True Stories of Grifters, Killers, Rebels and Crooks collects a dozen pieces he’s penned as a staff writer for The New Yorker. Whether his subject is a drug cartel kingpin, a Wall Street swindler or an amoral weapons dealer, his stories don’t lack for memorable facts and elegant aphorisms. By 2010, he writes, the U.S. Drug Enforcement Administration had an astonishing 80-plus offices in more than 60 countries. But the international dragnet isn’t always a match for crime bosses who mount populist charm offensives. Until 2019, when he was convicted of multiple crimes and locked up for life in an American prison, Joaquín “El Chapo” Guzmán tightened his grip on the Sinaloa cartel by paying for baptisms and bankrolling ostensibly legal businesses. “Nothing deepens sympathy like charity and bribes,” Keefe writes.

Like Empire of Pain: The Secret History of the Sackler Dynasty, his prizewinning 2021 book about Big Pharma profiteers and the opioid epidemic, Keefe’s magazine crime reporting is informed by his self-avowed fascination with “the power of denial” and “the permeable membrane separating licit and illicit worlds.” In a recent video interview, he answered a few of my questions about these and other subjects.

Kevin Canfield: You grew up reading crime stories, among other stuff, in The New Yorker. Were there particular books, like New Yorker staffer Calvin Trillin’s Killings, or specific articles that made you want to do this kind of writing?

Patrick Radden Keefe: Trillin’s Killings I discovered later, when I was already doing this kind of work. It’s funny you should mention it, because that’s a book I thought a lot about when I was putting together Rogues. The stories that were real touchstones for me are ones that you wouldn’t necessarily expect. In ’95 I was in my first year in college, and Henry Louis Gates Jr. published a big story about the O.J. Simpson verdict called “Thirteen Ways of Looking at a Black Man.” That was the first time I had ever thought about how a magazine article is constructed: Look at all these people he talked to—he must’ve chased all these folks down and had these deep conversations with them, and then woven together their different perspectives on the verdict and what it means.

KC: When did you realize that, as you write in Rogues, lies and secrets were among your “abiding preoccupations”?

PRK: I grew up reading a lot of crime fiction—Conan Doyle and Agatha Christie and Dorothy L. Sayers—and that was probably my route into these stories about deviant behavior of one sort or another. I think another influence may be my mother, who is a retired professor of philosophy. She was always doing a lot of work on the intersection of philosophy and psychiatry, looking at different kinds of aberrant conditions.

KC: I’ve read that you decided to write Say Nothing after reading an obituary of one of the people involved in the crime.

KC: This made me wonder about the inspiration for some of the stories in Rogues.

PRK: That’s always the riddle. I’m always trying to move through the world with my ears open for a good story. Often, things will come up in conversation or I’ll get tips from people. One of the luxuries of writing a ten thousand-word piece for The New Yorker, when you can take months and months to do it and you have a lot of room to roam, is that you can read a newspaper article that’s eight hundred words long but seems to contain a much bigger world. In that case (Say Nothing), I read an obituary—just stumbled on it—and was completely transfixed by the story of this woman’s life. When I started to dig in, I realized there was something much bigger there.

KC: After the El Chapo story was published in 2014, his lawyer called you. You were leery about calling him back. I can understand why. As you say in the piece, cartel leaders have been known to leave “‘corpse messages’—piles of dismembered bodies,” in public places as a warning to journalists and anyone else who’d get in their way.

PRK: I was scared. The thing that’s funny in retrospect is that I didn’t tell my wife because I knew it would freak her out. She didn’t know for about a week. But I talked to (New Yorker Editor) David Remnick about it right away. I did a little due diligence on this lawyer—a government source of mine ran the name, and he came back and said, “Yeah, the lawyer is legit.” So all of that worried me a little.

KC: As it happened, El Chapo wanted you to help write his memoirs, an offer that you immediately declined. But do you worry about your safety when reporting pieces like this?

PRK: In a way that might be surprising given some of the people I write about, I have a pretty well-calibrated risk threshold. I’m a middle-aged guy, I’ve got two kids. I’m careful about things, so if there is a situation that seems particularly hazardous, I wouldn’t necessarily go in. I’m not somebody who is known for his derring-do on the ground. But I think in the particular context of the cartels, it’s also important to point out that I have this privilege—I’m American and I live on this side of the border. The cartels have killed lots and lots and lots of journalists, and those journalists are Mexican. That is an awful reality, and it is absolutely true that those organizations pose a huge threat to journalists. But they don’t pose a threat to journalists like me.

KC: Given the tech tools are your disposal, is this a kind of heyday for cold-case investigations?

PRK: In some respects, yes, it’s incredible what you can do. My book Empire of Pain was based on tens of thousands of pages of court documents, and if I couldn’t optically scan those documents and then do keyword searches, there’s no way I would’ve been able to get through the sheer volume of that. When you read about Robert Caro working his way through the (President Lyndon B.) Johnson archives, it’s interesting to wonder how that process, both in terms of the reporting and the way it shapes the writing, was different in the pre-digital age versus now, when you can move through these vast repositories of information with an eye toward what you’re looking for.

KC: The stories in Rogues inform one another in edifying ways. In a piece about tax evasion and Swiss banks, you note that a U.S. Senate investigation found at least one bank was important in the money-laundering done by Mexican drug cartels. The cartels, of course, are the focus on another of the stories in Rogues. This made me wonder: Is there a way of looking at financial crimes as all part of the same big scam?

PRK: What a great question—I think about this all the time. This is in some ways one of the biggest preoccupations for me—the difference between licit and illicit bad activity: What gets blessed? Who gets out of jail free? And who doesn’t? Because I’m interested in that murky netherworld between the two, convergences come up all the time. I’ve written a fair amount about intelligence and the CIA, and I also wrote about the arms dealer Monzer al-Kassar. It turns out that over the years he had a relationship with the CIA. I’m working on a story right now that will close tomorrow and come out next week, and it turns out that the person I’m writing about, for a time, was kept at the federal holding facility in Lower Manhattan, in Chapo Guzmán’s cell. Not at the same time. But it’s like the Lincoln Bedroom—once Chapo Guzmán stays there, it will always be his cell.

KC: Al-Kassar, you write, likes to be coy about his dealings, to almost tease the authorities. He built a home in Spain and named it Palace of My Virtue. In another of your pieces, there’s a guy who might have done business with terrorists, including those who bombed Pan Am 103 over Lockerbie, Scotland in 1988. He claims he wasn’t involved, and yet his email address begins with “Mr.Lockerbie.” What do these guys get out of flaunting their notoriety?

PRK: There’s something a little pathological in both cases. I think they’re peacocking—they’re kind of winking, saying maybe I did it, maybe I didn’t. There’s almost a freedom and exhilaration for some of these folks that comes with getting away with it. As a writer, that’s something I’m drawn to—these big, forceful personalities who’ve taken the measure of a system, and then they think they’ve figured out how to game it to their advantage. Sometimes they get away with it. And sometimes they don’t.

KC: You mention how a culture of corruption in some countries causes a kind of “reflexive cynicism”—nobody believes anything government officials say. Beyond the bribes and crooked cops, how does this shape a citizen’s basic relationship to government, to their civic responsibilities, to their neighbors?

PRK: And our relationship with the very concept of truth. One of the things about reporting in Mexico that was so bewildering to me is that nothing is verifiable and nothing is falsifiable. You have people come out and say that the former president of Mexico took a huge bribe, and nobody can really prove it, but nobody can falsify it either. And the average person is left confused. When you talk about the number of people who are dead from the drug wars in Mexico, nobody can even give you the aggregate number. People will say eighty thousand or one hundred thousand. Nobody knows. It’s not a situation in which people are able to even tally the death certificates. I think that that creates, over time, a sense of helplessness, a kind of jaundiced view of the very possibility of accountability.

Russia is another place where this has happened. I did this podcast, Wind of Change (about a pro-democracy song by the Scorpions, a German band, that was purportedly written by the CIA). One of the questions that came up was whether the United States to some extent isn’t now experiencing some of that same kind of phenomenon. There’s an amazing quote in the podcast, where this young woman who was our fixer in Moscow, says, “All these years I thought that Russia was going to become more like the United States, and instead, you became more like us.”

KC: Is there a white whale for you, a story that you’re pursuing that you’ve not been able to nail down?

PRK: There are a few. But I can’t tell you what they are. 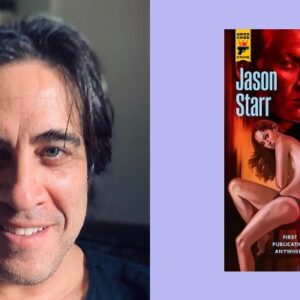 Always versatile, a writer of contemporary noir, domestic thrillers, horror, graphic novels, and both Marvel and DC tie-in...
© LitHub
Back to top