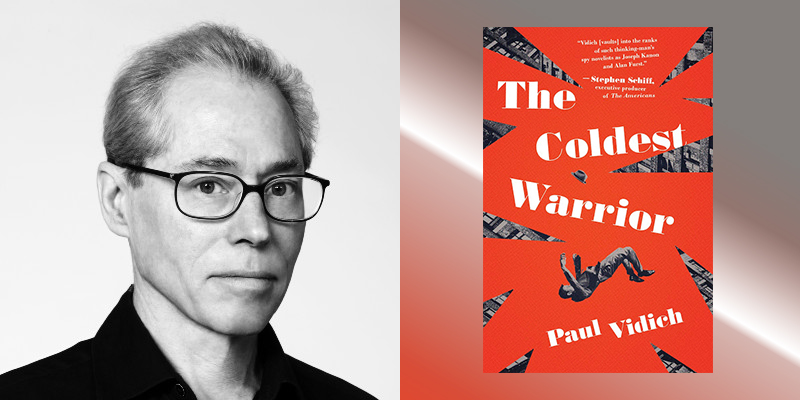 The author's uncle was dosed with LSD and died outside a New York City hotel. Now, he's exploring that crime in a new thriller.

Kevin Larimer, Editor-in-Chief, Poets & Writers, interviewed author Paul Vidich at PowerHouse Arena February 4, on the launch of Vidich’s new novel, The Coldest Warrior (Pegasus Books, 2020). The novel follows the aftermath of the Rockefeller Commission report on illegal activities conducted by the CIA, including the use of unwitting test subjects in LSD experiments and the cover-up of a death resulting from those experiments. Vidich’s uncle, Frank Olson, was the victim of the real-life crime that inspired the book. (Olson’s death was also explored in the 2018 Erroll Flynn documentary, Wormwood.) Larimer and Vidich discussed espionage, extra-judicial activities, and the difficult work of adapting a family tragedy into a fictional thriller and

Kevin Larimer: Please talk about your decision to fictionalize the story of Frank Olson and novelize a narrative that exists (however incomplete) in the history of the CIA.

Paul Vidich: In my first two efforts, I wrote the book through the eyes of Frank Olson’s son, my cousin, and his life-long effort to answer the question, how did my father die, and why? This approach suffered in two ways. First, I was too wedded to the actual story, and too respectful of the family connection, and I ended up with an account, not a novel. Second, it never answered the question—who killed Frank Olson.

I needed a new approach. I was drawn to the men inside the CIA—Olson’s colleagues. I wanted to understand how educated men, sophisticated men, churchgoing men, allowed themselves to put moral qualms aside when confronted with a choice between national security and criminal behavior. Who were these men? How did they live with their choice?
What was their motive. What would I have done?

Fiction gave me the freedom to go beyond the facts of the case and answer those questions. Albert Camus put it well: “Fiction is the lie through which we tell the truth.” Fiction became a bridge over the gaps in first-hand knowledge.

KL: Frank Olson’s story exists not only in the dark history of the US intelligence community but also as part of your family history. Was this a tricky decision to write about something so close to your personal life? What was the process in which you found a comfortable way to tell the family story?

PV: I stepped away from the family story in order to write The Coldest Warrior. I had bumped up against what I should say, what I could say, and what I should avoid. I decided to tell to the story of Frank Olson’s murder and murders, and not the story of the Olson family.

I put my protagonist, Jack Gabriel, inside the CIA. He is the consummate inside man who is tasked by the Director to find out how Wilson died, and why? I turned Jack Gabriel into a Pilgrim Dante being led through the CIA underworld by Virgil (the character George Mueller in this case). I wanted to put a human face on the Cold War by focusing on the psychological burdens of my characters. Doubt and paranoia breed in a culture of secrecy as does a sophisticated amorality of the men at the top of the intelligence bureaucracies. These men invariably bring some of that darkness into themselves, suffering the moral hazards of a line of work that sanctions lying, deceit—even murder. The interplay of state secrets and individual lives is what ultimately interested me about the Frank Olson story.

KL: One of the fascinating threads through this book is the concept of history (or the past) as a character unto itself. This only makes sense in a suspenseful narrative about a mysterious death. But this conceit offers you opportunities to write really wonderful allusions to the circular notion of time:

Early on, Jack Gabriel recalls a quote from William Faulkner, while listening to the lies of the director of the CIA under oath: “The past isn’t dead/over, it’s not even past.” At another moment John, Jack Gabriel’s version of deep throat, opines: “Old shit is prologue to new shit.” Any thoughts on this?

PV: Time, and the characters’ relationship to it, is a thing I wanted to explore. The murder took place in 1953. For 22 years, there was a only silence. Wilson was gone and forgotten. Then, the story breaks when the Rockefeller Commission inadvertently spills the beans, and the past comes alive. Old choices come to haunt these men whose careers had flourished in the intervening years.

I wanted to understand how educated men, sophisticated men, churchgoing men, allowed themselves to put moral qualms aside when confronted with a choice between national security and criminal behavior.

In The Tempest the line is “What’s past is prologue.” Shakespeare’s character uses it to suggest that all that has happened before, the “past,” leads up to the murder he is going to commit. The past determines actions today. I used the past in the same way. One murder long ago comes back to haunt the murderers, whose lives have moved on, and who had hoped a dark episode was buried for good. In the novel a character says: “Old shit is prologue to new shit.”

The past operates in other ways as well. Gabriel returns to Wilson’s house in rural Maryland and he the sights, sounds, and smells remind him of his last visit years before—the smell of the hay, the sound of the crickets at dusk, the sight of a water tower beacon. That past moment, the memory, is experienced again through the refraction of lost time. Choices made years before continue to control their lives.

KL: The memorable last line of The Great Gatsby is: “So we beat on, boats against the current, borne back ceaselessly into the past.” In a wonderful allusion to Gatsby, you describe the water tower that can be seen from the home of Frank Olson’s widow: “Evening had come, and with it the red aircraft beacon on the water tower was a compass point in the growing darkness, pointing to the past.”

PV: There is a beacon on the Water Tower at Fort Detrick that can be seen from Frank Olson’s home on a surrounding hill. As a child, I would peer out the living room’s window at the Army base and ponder: What did he do there? What happened to him?

KL: Your first two books were published by an imprint of Simon & Schuster, and with this third book you’ve moved to the independent publisher Pegasus Books, where you worked with editor Katie McGuire. That’s a shift, yet The Coldest Warrior has received starred reviews from Publishers Weekly and Library Journal and appears poised to be a breakout book. It seems to me there’s a good publishing story there, perhaps one that holds lessons about the generative power of rejection?

PV: [Laughing] The book Simon & Schuster passed on, was the second of my two attempts to tell the story. We submitted the book to several other publishers, and while some liked the book, none took it. I gave the book to a dear friend from college who gave me some hard criticism. I have found that criticism, if thoughtful, is much more helpful than praise. Praise, however, satisfying, doesn’t illuminate the ways in which a book fails. I rewrote the book substantially over three months. The revised book was picked up by Pegasus. So, in one way, I owe my former editor a debt of gratitude for dropping me.

KL: Why do you think you are drawn to the espionage/spy/thriller genre?

PV: I write the books that I like to read. I have always been a fan of Graham Greene, John Le Carre, Joseph Conrad, Somerset Maughan, and Eric Ambler. The Third Man, The Quiet American, A Coffin for Dimitrios, and The Spy Who Came in From the Cold are books I devoured. So, in a way, I suppose I was always fated to write that type of novel.

But what specifically took me down the rat hole? My uncle’s death. I discovered a man who couldn’t discuss his top-secret work with his wife, and he couldn’t share his doubts about his work with colleagues. He was lonely, cut off, and wanted to get out. Then he was drugged, made unstable, and the U.S. didn’t have a gulag where they could send an unstable man with terrible state secrets in his head. I found that type of man—the insider wanting to get out—interesting and compelling. I asked myself, what if that had been me?

That character became George Mueller, the protagonist in my first novel. I gave him a life. Yale graduate who joins the OSS in the great enthusiasm after WWII to do good in the world, and finds himself questioning the sources and methods of covert operations. He went to an Ivy League university, majored in English, had a future before him—a little bit like many of my friends who went to work in consulting, investment banking or media, but he joined the Central Intelligence Agency.

I could have been George Mueller. But, I joined corporate American after college. So, in some ways, George Mueller is my alternative life, filled with all the ‘what ifs’ and ‘what might have beens.’

KL: Why do you think this story about the dark side of intelligence, state secrets, and coverup is so compelling today?

PV: The Frank Olson case is part of the legacy of inconvenient truths that exist in a democracy that finds it hard at times to balance openness with the need to keep secrets. It continues to fascinate us. We love stories of the little guy challenging powerful government and winning. The Report, the recent movie with Adam Driver, tells just such a story—the CIA trying to hide it record of torture from Congress.

And this stuff happens again and again, Yes, there are safeguards in the CIA against extra-judicial activity. But in a crisis, the safeguards are ignored, or new justifications are invented. This happened in the CIA’s efforts to kill Castro and Lumumba, and it happened in the renditions of suspected terrorists after 911. It happened with Frank Olson. Safeguards are set aside, or ignored, and extreme methods used when the demands of crises allow good men to hide behind national security.

To paraphrase another writer: “In time of war, it is a soldier’s job to kill. In a time of crisis, it is the CIA’s job to lie, suborn allies, keep the secrets, and if necessary, to kill.”

KL: In a short essay you wrote for Poets & Writers Magazine when you published your first novel, An Honorable Man, at the age of 66, you described how you started writing when you were in your twenties then put it on hold to start a career and provide for your new family, returning to it again at the age of 56. You wrote, “I had lived a lot, and the distance of time gave me perspective. There was a world to write about that I did not have access to at twenty-seven.” You’re publishing your third book now. Do you feel like that world continues to open up as you grow older (and wiser)?

PV: The past continues to open up, and the future continue to shrink. Most of us, in our writing, look backwards, not forwards. Age, time, experience. I believe they give the writer confidence to write. But age isn’t necessary. There are great writers whose first book came in their twenties and there are great writers whose first novels came in their 40s, 50s, and 60s.

Kevin Larimer is the Editor-in-Chief of Poets & Writers Magazine. 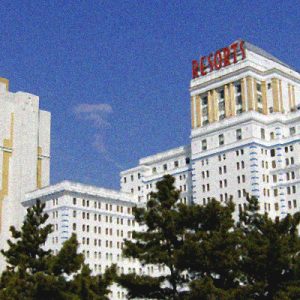 When I was a little girl my favorite place in my grandparent’s house was my grandmother’s closet. As an executive in the credit...
© LitHub
Back to top