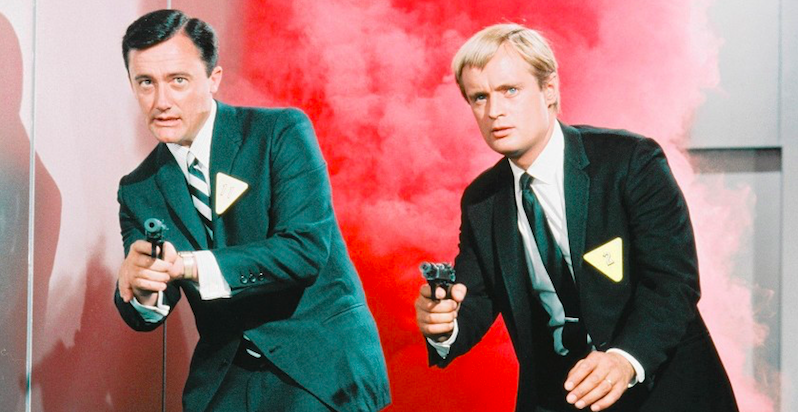 These Are Plot Descriptions of Actual Episodes from the 1960s Spy Television Series The Man From U.N.C.L.E, and Wow they are… Insane

It is a truth universally acknowledged that the best emotional medicine is weird mid-century sitcoms.

Right now, we are (rightly!) discouraged from thinking about these at-home days (spent sheltering-in-place or quarantining or self-isolating) as “snow days.” They are not free vacation days, despite that they may have coincided with several spring breaks. But in a way (perhaps because of their sedentariness or interminableness) they do feel fairly like “sick days.” Doing all my professional work from my couch with my bored dogs and consuming nothing but soup and zinc gummies has made me remember the days I’d stay home from school and watch TV in my pajamas. Sick days are for watching old television, and I spent my time catching up on shows like Secret Agent Man and F Troop and Get Smart and I Dream of Jeannie and the Dick Van Dyke Show and basically every other show that guest-starred Paul Lynde. And that is how I healed. Not medicine, or bedrest, but Bonanza. Kidding, but in this spirit, I tried to think of an absurd halcyon TV show to write about, one whose observance might be restorative for us all in these times. And that’s when I remembered The Man from U.N.C.L.E, perhaps the weirdest mid-century show of them all.

Recently remade into a movie starring Henry Cavill and Armie Hammer, The Man from U.N.C.L.E. was a lighthearted spy comedy series that ran from 1964-1968 on NBC. It starred Robert Vaughn as Napoleon Solo, an ultra-cool American spy employed by an international organization called the United Network Command for Law and Enforcement (U.N.C.L.E.). He is assisted in his spycraft by also-cool Russian agent Illya Kuryakin (David McCallum, who in his later years plays Ducky on NCIS). And their supervisor is less-cool British pencil-pusher Alexander Waverly (Leo G. Carroll). Each independent episode features Solo and Illya going to stop some cockamamie evil plan somewhere in the world. But these episodes are also… insane? They are absolutely bananas.

The show participates in that particular groovy, super goofy 60s spy comedy aesthetic—you know, the one that’s kind of Casino Royale-with-David-Niven but also kind of Batman-with-Adam-West. But even more than I (or my parents) remembered, The Man from U.N.C.L.E. episodes are stupidly sexist (but in a way in which feels laughable? Not like the Flynt series, whose sexism actually packs a nasty punch). Most importantly, U.N.C.L.E.‘s plots make absolutely no sense. Nothing about this show actually makes any sense. The acronym for the villainous organization is T.H.R.U.S.H, which I think is also some kind of yeast infection.

So, we’ve assembled for your reading pleasure plot descriptions from numerous Man from U.N.C.L.E episodes. I’ve literally just pasted them over from Amazon, adding no words to them whatsoever. Someone somewhere is going to write a great essay about how the show handles and reflects Cold War-era anxieties about nuclear fallout and international collaboration and female power, but that’s not me right now. What follows is just episode descriptions, and they are bonkers. But don’t just take my word for it. Enjoy! Sonny and Cher guest star in one of them! Enjoy, enjoy, enjoy.

When a young air force officer is shot to death in an Iowa cornfield, Solo finds scuba-diving suits, a fresh-scrubbed farm girl and a “farmer” whose silos contain not grain but a super-secret missile.

A 12-year-old boy, a beautiful stripper, a dog named Spike and a murderous Japanese warlord send Solo and Illya to a mysterious castle where they discover a strange plague that ages its victims.

A murdered uranium scientist, a beautiful belly dancer and a pack of wealthy and wicked socialites make up the bizarre group encountered by Solo as he tries to solve the disappearance of notorious international crime leaders.

A bashful girl and a nimble-fingered safe cracker join Solo and Illya in a death-defying attempt to rob THRUSH of $50 million.

When world leaders are found dead with their throats slashed, Solo, Illya and Mr. Waverly suspect THRUSH has electronically gained control of the brain of each victim’s pet dog and turned it against its master.

A singing student is turned into a glamorous Parisian nightclub singer by Solo, Illya and Mr. Waverly when they use her to trap jewel thieves.

Solo, Illya and a dewy-eyed college coed unmask the leader of a religious cult who preaches by day and plots by night to take over the world with his earth-circling rocket.

Napoleon and Illya tangle with a bevy of beautiful THRUSHETTES that has stolen a secret formula that brings the dead back to life.

Solo, Illya and Mr. Waverly Watusi, frug and swim into a wild bunch of deadly dancers at a discotheque run by THRUSH

Napoleon and Illya become hunted by a descendant of Robespierre who surrounds himself with the color white and seeks to destroy France’s wine industry.

THRUSH turns a group of angelic-faced, 8-year-old choirboys into assassins.

Following a trail of stolen cats, Napoleon and Illya discover a THRUSH agent–and the rejuvenation chemical she has invented to restore youth to her 90-year-old lover.

Illya is thrown from a plane, naked, in the arms of a dazzling stewardess and with only one parachute for the two of them–as Napoleon races across the Arabian desert to save him from a horrible death.

While seeking the location of a secret THRUSH hideout, Napoleon falls prey to beautiful blonde.

The men from U.N.C.L.E. face beautiful, deadly and almost invincible assassins created by a mad scientist from the bodies of fashion models.

Illya and agent Mark Slate train a nightclub singer to impersonate a baroness working for THRUSH, but then the men from U.N.C.L.E. can’t tell the two women apart.

The men from U.N.C.L.E. battle murderous artists for control of a gas that causes people to hiccup to death.

The Men from U.N.C.L.E. travel to Switzerland to protect an Asian leader and receive unexpected help when a vacationing schoolteacher’s dental work can tune in THRUSH’s radio communications.

SONNY and CHER guest star as the chase is on for a popular new dress into which THRUSH’s Five Year Plan for mastery of the world has been sewn.

In Appalachia on the trail of deadly, explosive apples, Solo must deal with both THRUSH and the shotgun-toting father of a beautiful blonde.

In London, Solo and Illya work with U.N.C.L.E’s top British agent, Brian Morton, to protect the plans to a top-secret submarine–but is Morton’s fiancée working for THRUSH? 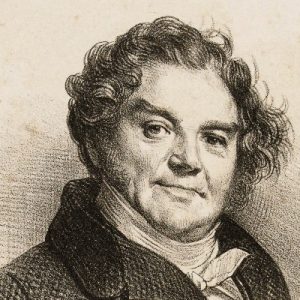 Eugène-François Vidocq (1775-1857) was, at various times in his life, a thief, a puppeteer with a troupe of traveling performers,...
© LitHub
Back to top