Portland: Noir in the City of Roses

Portland has inspired its fair share of crime novels. From its hardscrabble past to today's hot button issues, it's a city living on a knife's edge.

Portland, Oregon. To outsiders perhaps the “City of Roses” with a penchant for hipsterdom, coffee and food trucks. But, as we’ve seen recently, it’s a city of opposing sides, clashing views, uneasy gentrification and social marginalisation. Fertile ground for crime writers, and Portland has turned out quite a few excellent exponents of the genre.

You want the Portlandia image of a hipster Oregon city of coffee shops, crafts, poetry circles and food trucks? Then don’t start your Portland crime reading with Don Carpenter’s 1966 classic novel Hard Rain Falling. Jack Levitt, the orphaned teenage anti-hero of the book, living off his wits in the fleabag hotels and seedy pool halls of Portland. It’s grim and dark; a Dostoyevskian tale of crime and punishment (according to the New York Review of Books, a publication more likely to throw around eponymous adjectives like ‘Dostoyevskian’ than most). Perhaps it was that reference to the Russian greats that means that Hard Rain Falling is one of the few crime novels republished as a New York Review of Books Classic?

Similarly things are just as tough and seedy in, for my money, one of the best, toughest, most heartfelt cop novels ever—Kent Anderson’s Night Dogs (1996). Anderson, originally from northern California, worked as a merchant seaman, then enlisted, served as a special forces soldier in Vietnam and joined the Portland Police between 1972 and 1976. Night Dogs then may well be largely autobiographical. It certainly had the feel of the constant fever dream of night patrol, the often contradictory and illogical thoughts of regular patrolmen and the random violence of the 1970s city streets. It’s a grim and often difficult novel—centred around an annual cull of feral dogs on Portland’s streets by the police. Of course the night dogs as seen through the eyes of a patrolman named Hanson, a Vietnam vet, are the druggies, pimps, hustlers and the lost that inhabit the city’s night-time streets.

More recently Alafair Burke, who attended the Reed Liberal Arts College in Portland, wrote the three book Samantha Kincaid series. Kincaid is a Deputy District Attorney attached to Portland’s Drug and Vice Division. In her first outing, Judgement Calls (2003) a vicious beating on the city’s outskirts points to underage prostitution rings and a possible serial killer. In Missing Justice (2004) Samantha Kincaid starts out mixing in Portland’s high society which, it turns out, has some low and dirty secrets it might be willing to kill to keep. In the last of the trilogy, Close Case (2005), Kincaid has moved to the Major Crimes Team, a murdered reporter and a seemingly obvious suspect. All three books are great guides to the various upsides and underbellies of Portland.

One more Portland-set series: Chelsea Cain’s six instalment Archie Sheridan & Gretchen Lowell books. Portland City Detective Archie Sheridan develops a strange, and potentially rather unhealthy, relationship with serial killer Gretchen Lowell in the first book in the series, Heartsick (2008). Then in Sweet Heart (2009) the pair find themselves in Portland’s massive urban woodland, Forest Park. Book 3, Evil at Heart (2011) finds everyone coalescing around the city’s psychiatric hospital while The Night Season (2011) starts with a body on the banks of the Willamette River and then Kill You Twice (2012) sees dead bodies turning up in Mount Tabor Park. Finally in Let Me Go (2014) Sheridan and Lowell meet a final time on Sheridan’s birthday on a private island owned by a notorious Portland drug kingpin. It naturally doesn’t all end with champagne and cake.

And finally, we have to mention the great Portland-based author (and musician) Willy Vlautin. Vlautin’s first two books, The Motel Life (2006) and Northline (2008) were both centred around Vlautin’s birth place of Reno but his third novel, Lean on Pete (2010), brought it all to Portland—different location but same bleak yet empathetic view of the downside of the American dream. All great books. But if you want a driving, gripping literary 48 hours in the life of marginal struggling Portland forced into crime to survive and moving from broken down houses to the newly gentrified Pearl District by way of some desolate industrial zones then you need to read The Night Always Comes (2021). Lynette is working two low-paid jobs, trying to take part-time college classes, look after her brother who has learning difficulties and support her mum. That she managed to save a dime, let alone a few thousand, is amazing, even if she has done some things she’d rather not admit to. But she dreams of owning her own home, finding some stability in a Portland where the cost of everything just seems to be heading skywards and out of her reach. Then an opportunity to turn her luck around presents itself and Vlautin delivers an incredible blend of social commentary on contemporary Portland and a crime thriller. It’s not the Portland tourism bureau wants to show you but despite the passage of time and the supposed makeovers of the city it’s not a million miles from the of Kent Anderson’s Night Dogs or even Don Carpenter’s Hard Rain Falling from over a half century ago.

The Best Chocolates for Crime Lovers (And Their Favorite Sleuths) 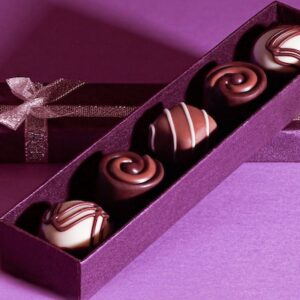 The Best Chocolates for Crime Lovers (And Their Favorite Sleuths)

CrimeReads asked me to write a post, and as soon as I read the suggested title, I went to the corner drugstore and bought...
© LitHub
Back to top