Fill your October with the horrors of literature.

The business of writing and reading pops up all the time in horror films. Maybe it’s that screenwriters understand better than anyone the terror of creation. Maybe it’s that long, late hours spent alone in an office juxtaposes nicely on screen against glamorous events hosted by the literati. Or perhaps we’ve all just had a traumatic childhood experience in a library. Either way, here are 31 films guaranteed to give you an October that’s equal parts eerie and erudite.

We’re taking a broad understanding of both the horror genre and of the book biz, with films featuring authors, agents, screenwriters, journalists, and just straight up evil books. Whether or not you’re a hardcover horror fan, there’s a little something for everyone here, from the downright frightening to the mildly thrilling. 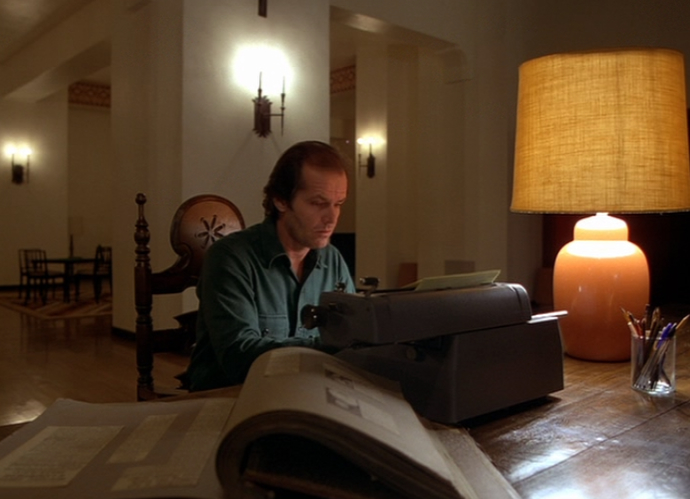 What else could we start with but The Shining, a ur-text of modern horror. There’s plenty of Stephen King that can qualify so we’ll just make sure to spotlight some favorites without going overboard, but The Shining is a perennial favorite (and the first of two Jack Nicholson appearances on this list). 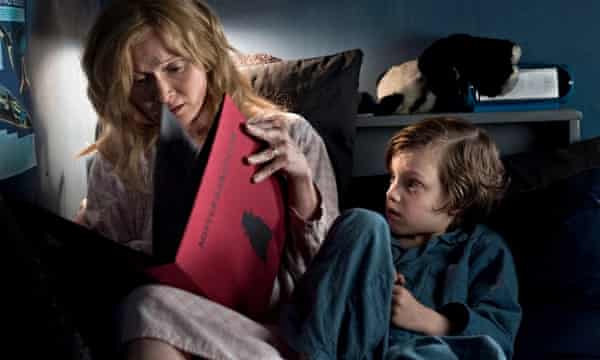 The Babadook might be known foremost as a queer icon with a strong sense of style but his radical approach to childhood literacy deserves attention. His pop-up book quickly takes over the lives of a single mother and her son in ways that I’m sure are familiar to any parent whose child begged them to read The Runaway Bunny for the five thousandth time. 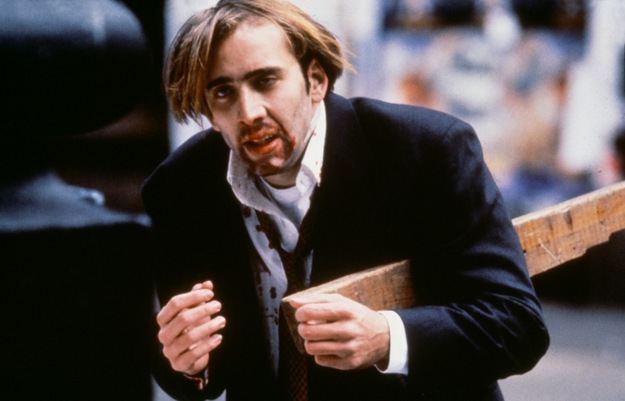 This black comedy stars Nicolas Cage as an arrogant literary agent whose mental and physical health deteriorates when he believes he’s been bitten by a vampire. Cage is in fine form in one of his most gif-able performances as a chatty, baroque creep and horror heads will be delighted to see Kasi Lemmons from The Silence of the Lambs and the original Candyman. 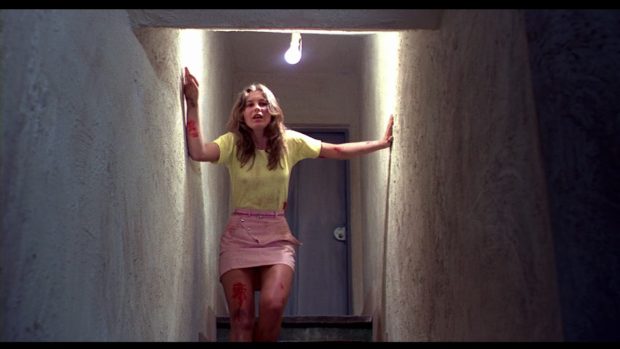 While on a book tour in Italy, an American writer finds himself in the middle of the hunt for a serial killer when the murderer’s crimes start to resemble his novels. This thriller was controversial upon release for its inclusion of female homosexuality and graphic violence but has since been reappraised as one of Giallo master Dario Argento’s best works. 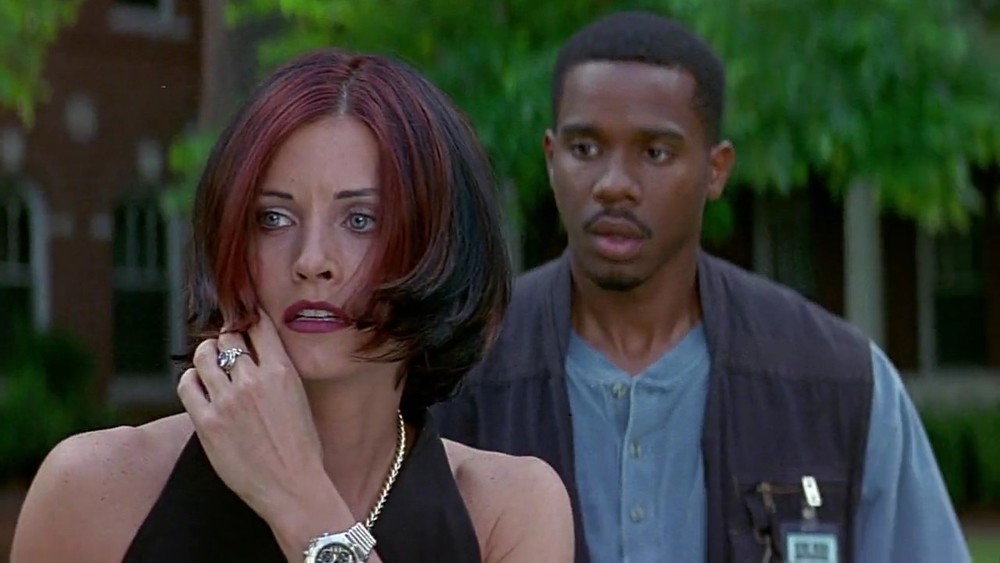 Courteney Cox as tabloid journalist/true crime writer Gale Weathers makes the first Scream, meta-masterpiece of horror, an auto-include for this list but you might as well just watch Wes Craven’s entire series, if only to see Neve Campbell’s self-help book tour that kicks off Scream 4. 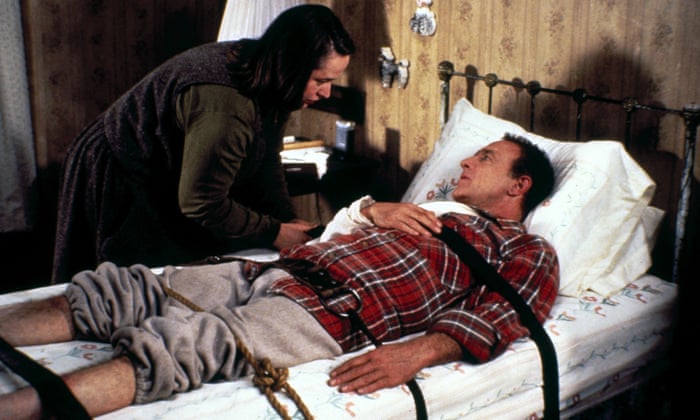 Yup, we’re back to Stephen King. Kathy Bates’ Oscar-winning turn as obsessed fan Annie Wilkes is some early insight into stan culture and a reminder for writers to keep an eye on who shows up to their book signings. 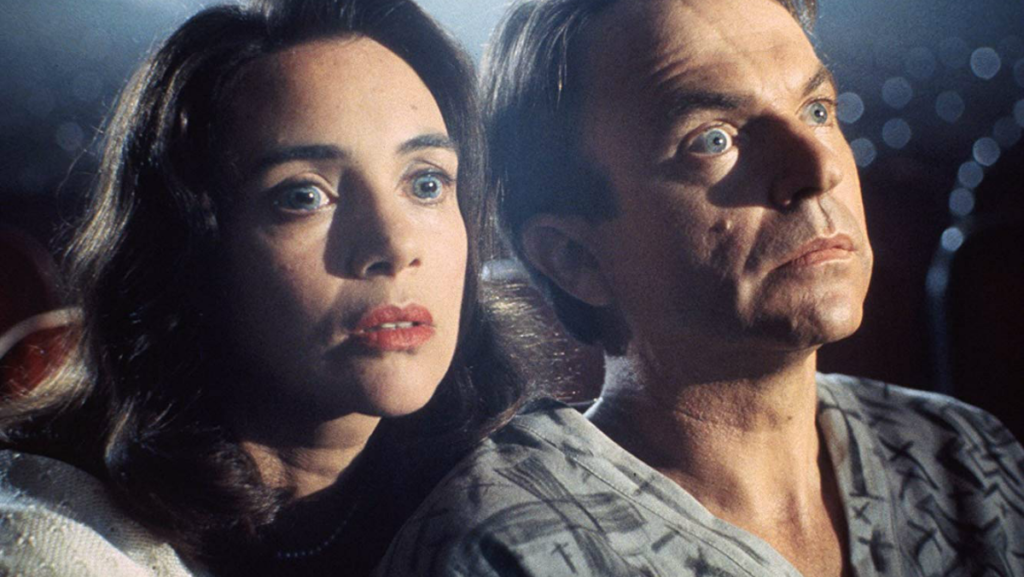 An insurance agent investigates the disappearance of a horror novelist whose books have begun to drive people literally insane in this meta horror film that gets inspiration from both H.P. Lovecraft and Stephen King. It might be one of the less remembered films in John Carpenter’s extensive oeuvre but the cozy New England inns, gory practical effects, and metal-tinged score make this a perfect October watch. 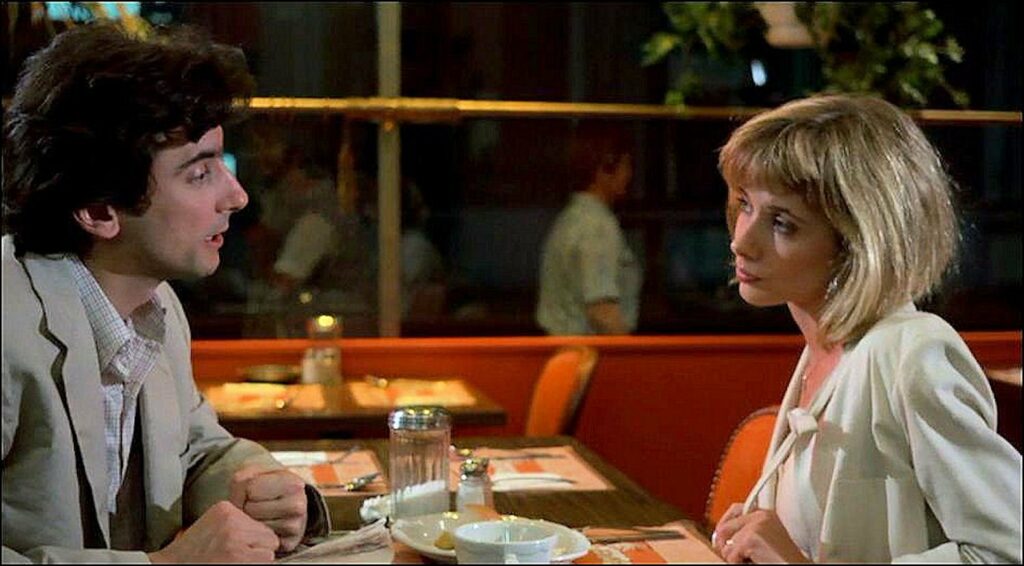 If you need a break from the chills and spills of the previous films, Scorsese’s offbeat comedy is a great black comedy to save for October. A wide-eyed Griffin Dunne stars as a word processor whose night gets progressively worse as he tries to make his way back home, his journey hampered by an all-star supporting ensemble cast. 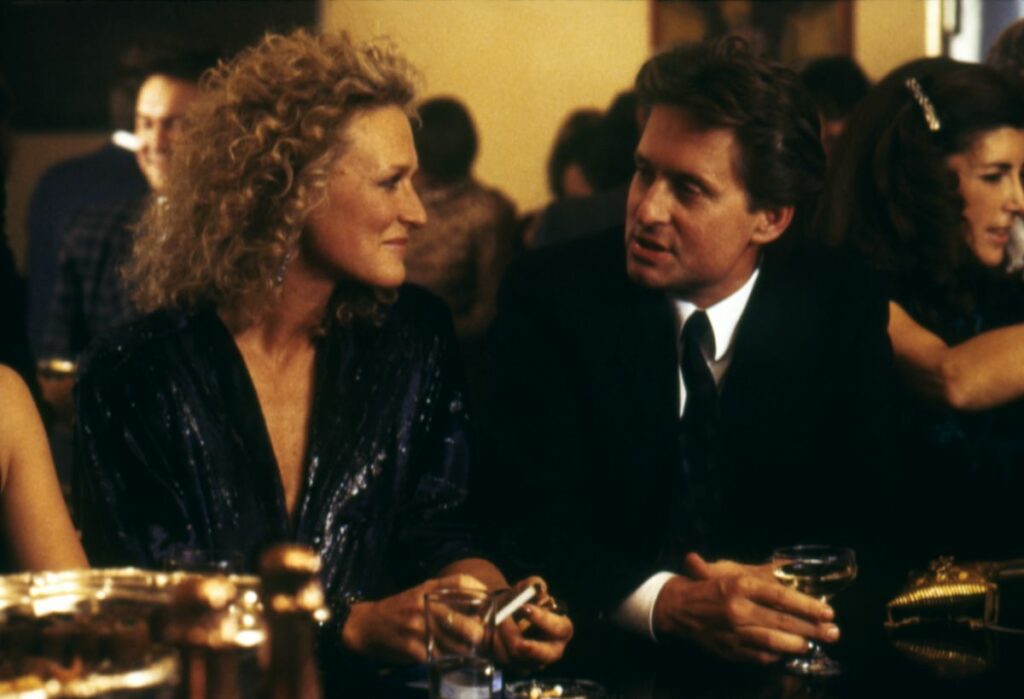 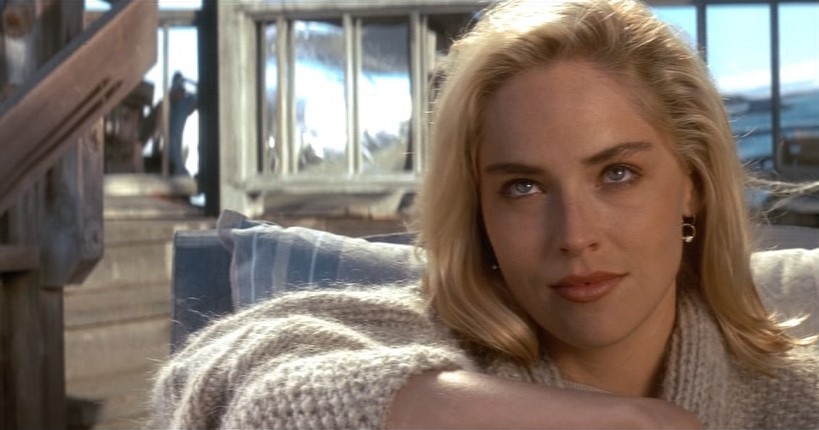 Sharon Stone’s leg cross might be one of film’s most iconic moments but don’t forget what gets us there—Stone’s crime novelist character has a habit of befriending (and bedding) murderers. Perhaps it’s all inspiration for her latest book, perhaps it’s just that femmes fatales love working in the book industry. 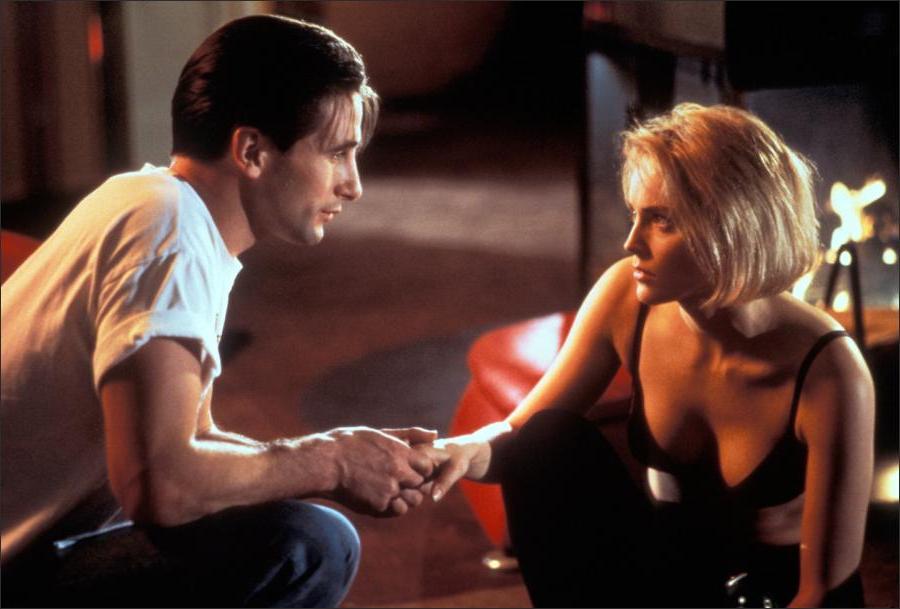 Sharon Stone’s meek, voyeuristic book editor is almost the exact opposite of her character in Basic Instinct. Whether this is a better companion piece to the movie than Basic Instinct 2 is for the reader to decide, although Sliver at least has the distinction of being based on an Ira Levin novel. 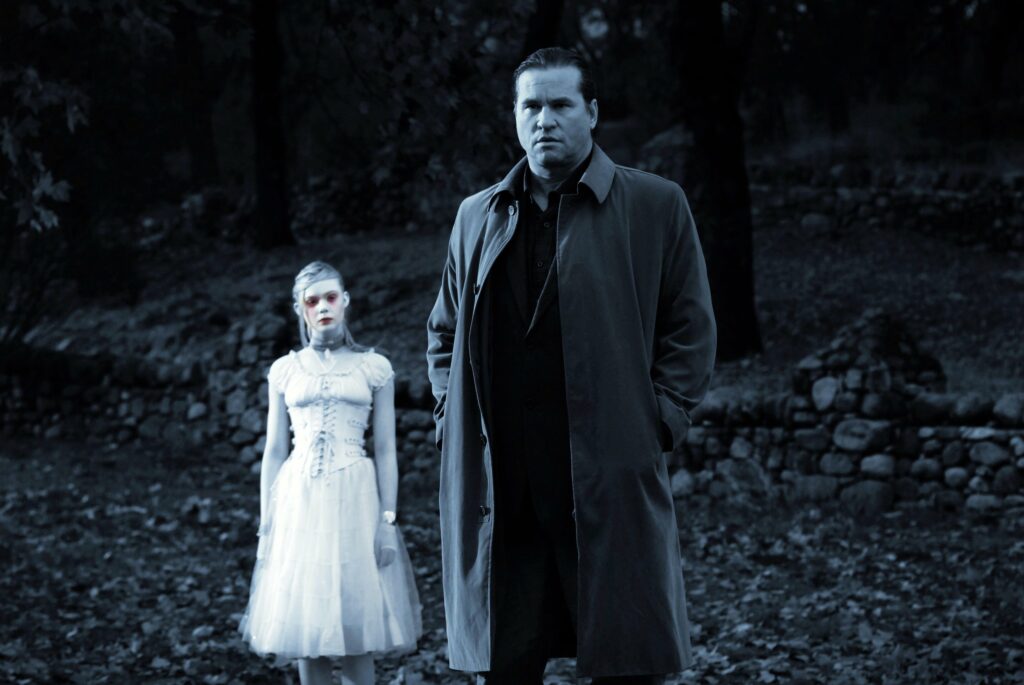 Val Kilmer plays a washed-up horror writer who, aided by a vision of Edgar Allen Poe, decides to make his next project about a strange town he visits on a lackluster book tour. Directed by Francis Ford Coppola, Twixt looks and feels a lot like an early aughts video game but does have a certain dreamy, campy charm—helped by an all-star cast that includes Bruce Dern, Tom Waits, and Elle Fanning. 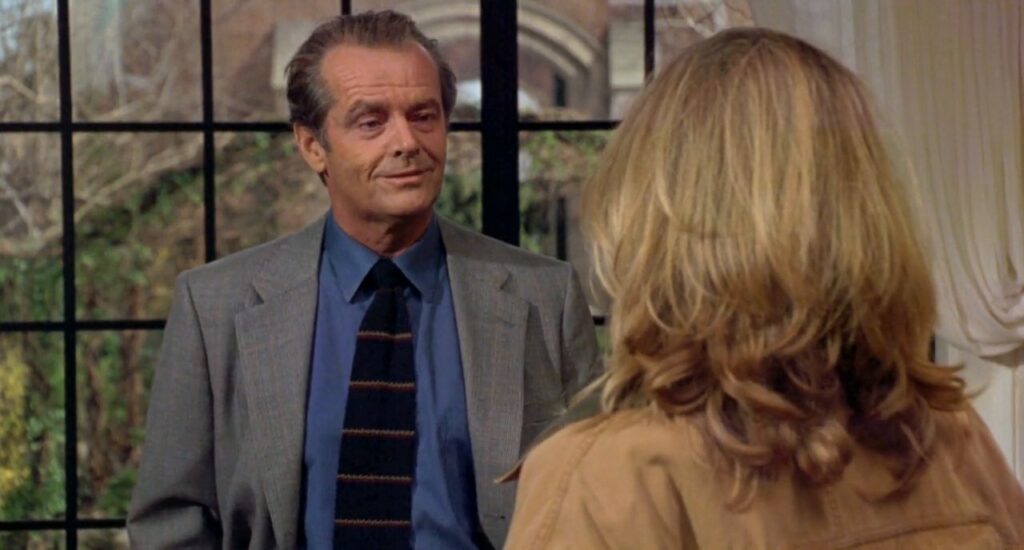 More terrifying than any of Wolf’s lupine hi-jinx are Jack Nicholson and James Spader as quite literal predators whose personal power struggles eclipse their publishing office. Directed by Mike Nichols with a cast that includes Michelle Pfeiffer, Christopher Plummer, and David Hyde Pierce, it’s certainly no one’s best work but is a perfectly serviceable way to kill almost two and a half hours. 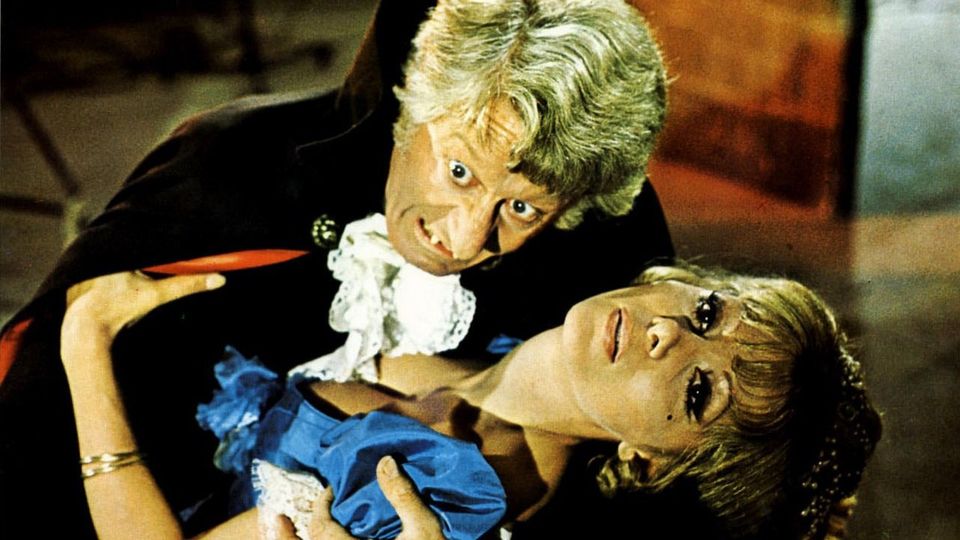 This low-budget anthology film features a detective investigating a strange house in the British countryside. Only part one—about a pulp horror writer who becomes obsessed with his own character—applies to the theme, but it’s worth sticking around for the other three parts to see Peter Cushing and Christopher Lee. 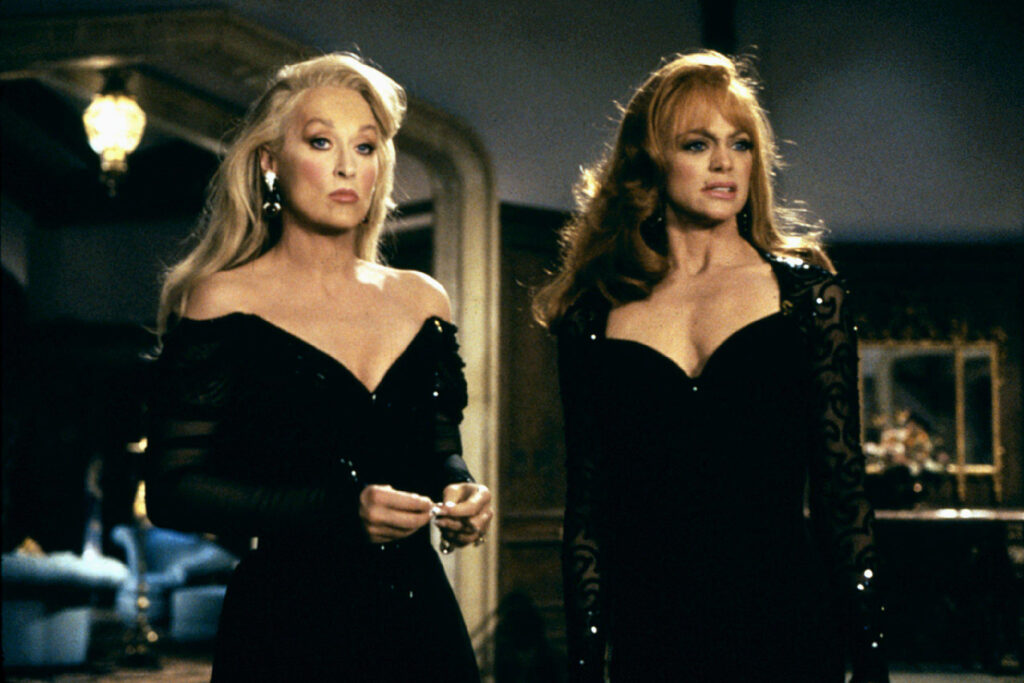 If you want to take another comic break, check out Robert Zemeckis’s cult dark fantasy starring Meryl Streep as a vicious, fading actress and Goldie Hawn as a up-and-coming writer. It’s an existential, grotesquely screwball physical comedy that will connect to anyone who’s rolled their eyes at a thirty-under-thirty list. 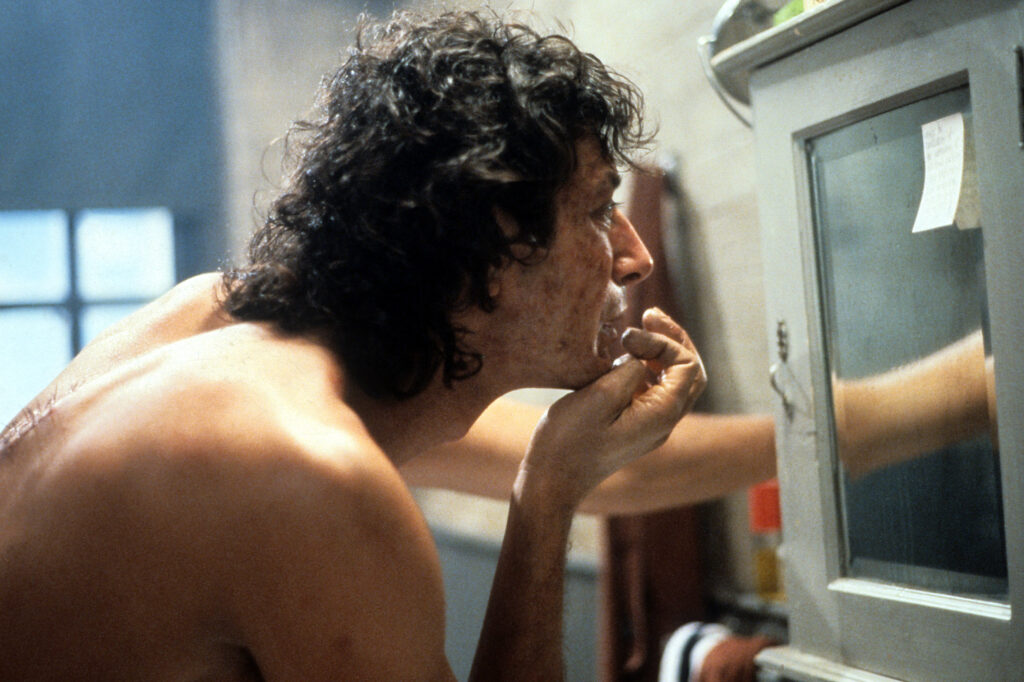 Jeff Goldblum looks in a mirror in a scene from the film ‘The Fly’, 1986. (Photo by 20th Century-Fox/Getty Images)

David’s Cronenberg’s The Fly already has a literary pedigree, as it’s based on the much-adapted short story by George Langelaan, but it’s also got plenty of publishing drama built into the plot. Inside this operatic body horror is the story of a journalist who is sleeping with her subject while being stalked by her boss/college mentor/ex-boyfriend. 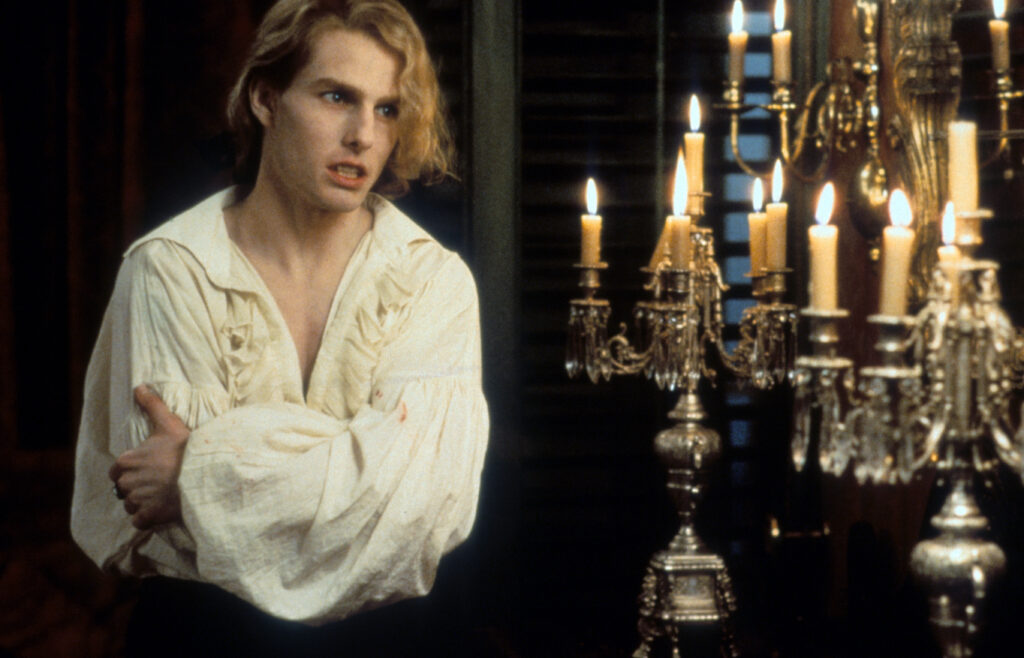 Let’s stick with the journalism theme—Anne Rice’s florid vampire fiction about a journalist who meets a centuries-old vampire was begging for adaptation, and this is a delicious slice of pulp. The less said about Brad Pitt’s completely limp performance the better, but Kirsten Dunst and Tom Cruise make the most delightful pair of vampires you could hope to meet. 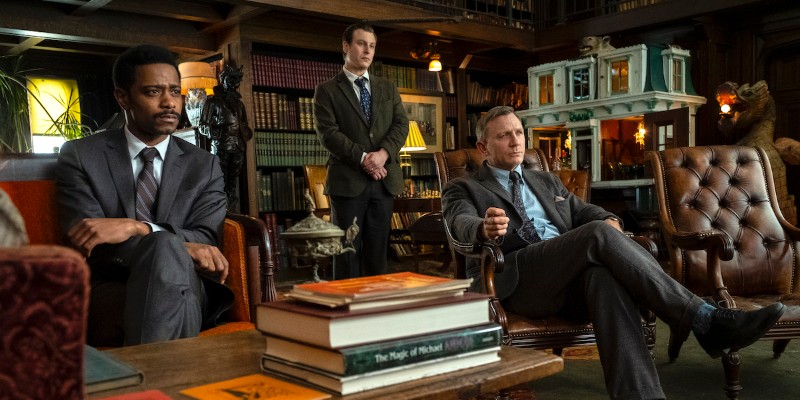 If you somehow missed this recent blockbuster, Ana de Armas plays a nurse who gets tangled up in a whodunnit when her wealthy novelist client (Christopher Plummer’s second appearance on the list!) passes away and leaves her his estate. The real mystery is why one of the most successful mystery novelists of all time would self-publish his books. 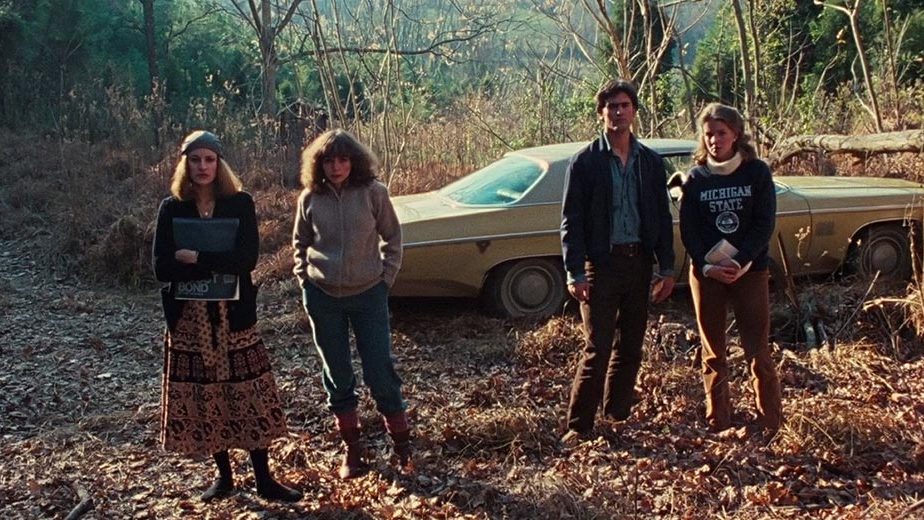 Literacy kills. We’ll tack on the rest of the series for good measure but the Evil Dead presents a strong warning about the dangers of book-learning—five college students read a mysterious old book that triggers a full scale demonic invasion. 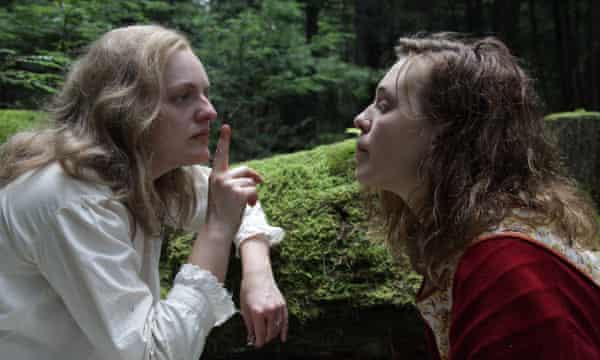 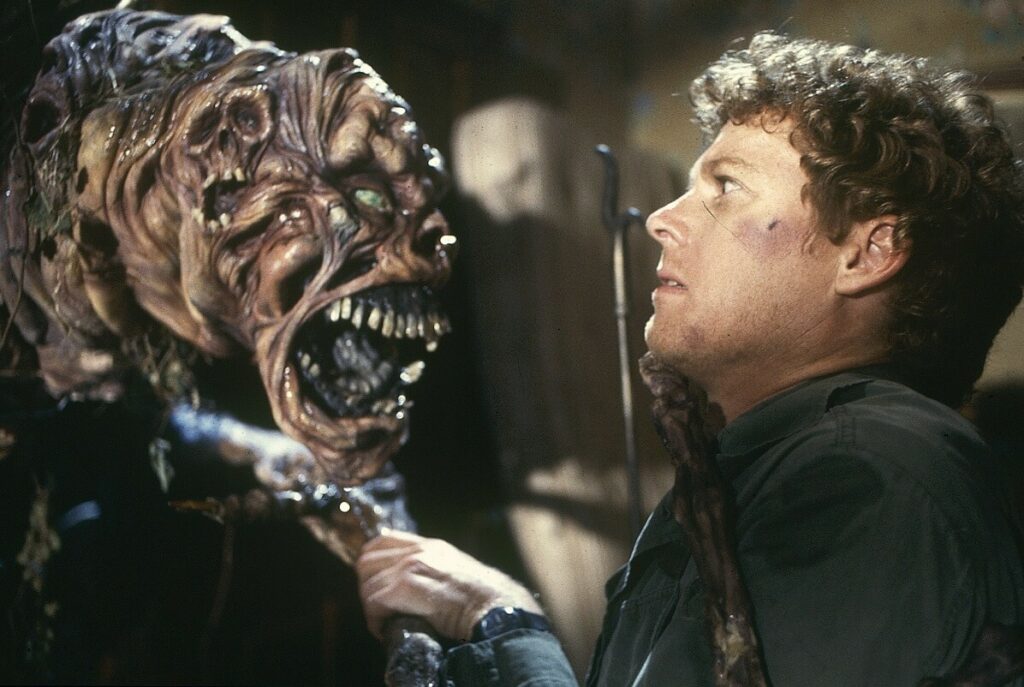 A horror writer struggling with PTSD, grief, and serious writer’s block moves into his deceased aunt’s creepy Victorian manor and becomes obsessed with setting up Home Alone style traps to figure out whether the place is truly haunted. This playful supernatural flick boasts both Bull from Night Court and Norm from Cheers, making it potentially the most 1980s movie of all time. 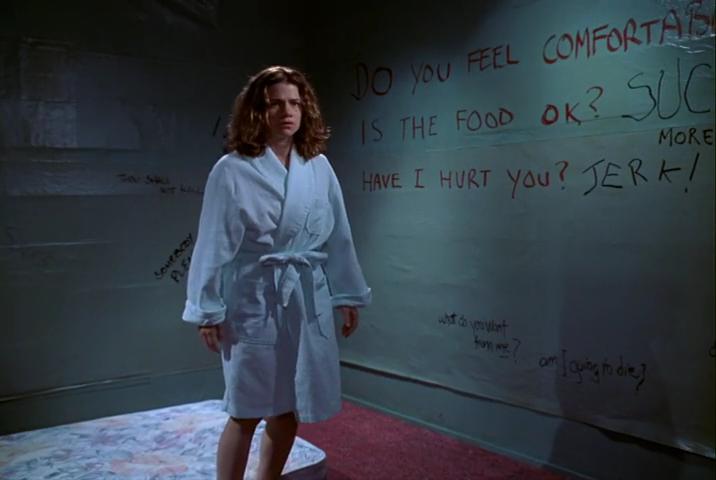 An endearingly silly made-for-TV movie starring Judd Nelson as a dead-eyed screenwriter who kills for inspiration. There’s plenty of early aughts whimsy (and soundtracking) alongside some truly creepy mannequins and oh-so-Hollywood agents. 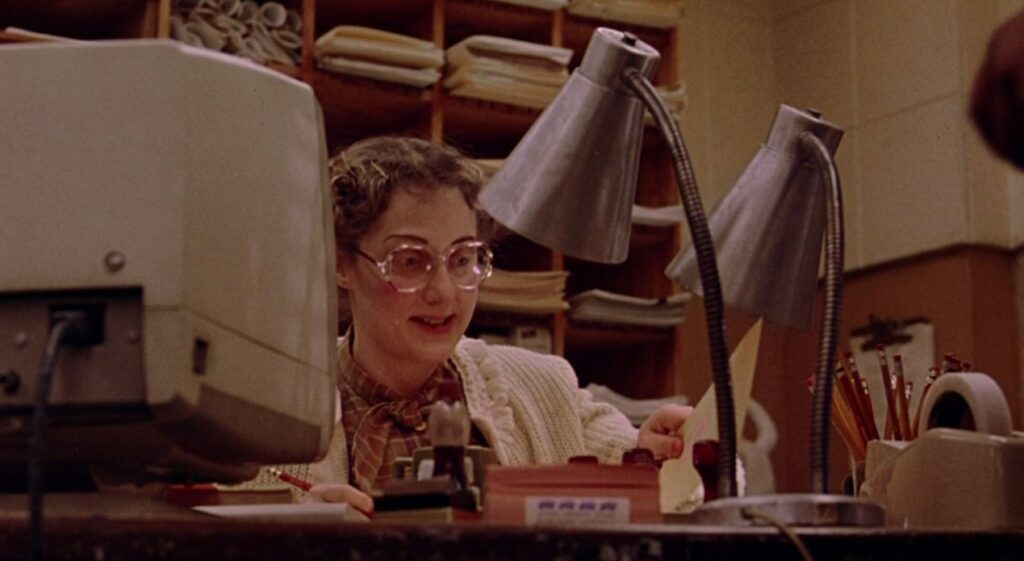 The only film directed by legendary modern artist Cindy Sherman stars Carol Kane as a meek magazine editor who develops a sudden blood-thirst. It’s a weird 90s relic with work-from-home and the ubiquity of email as major plot points, and a script doctored up by Todd Haynes. 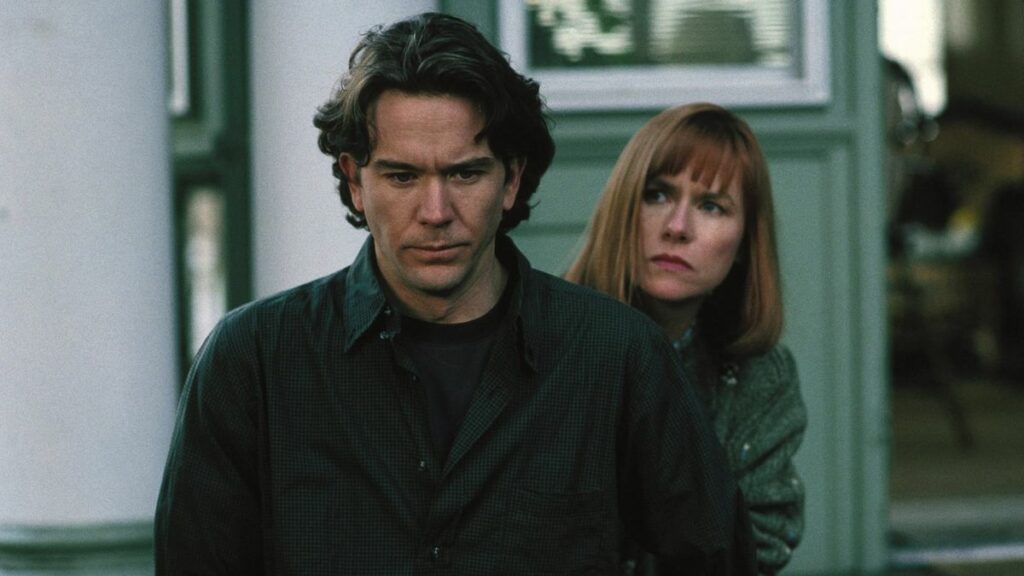 We jump back into the world of Stephen King with this wry adaptation about a writer who kills off the pseudonym he writes violent crime thrillers under. Directed by horror pioneer George A. Romero, The Dark Half suffers from a classic muddy King ending but is otherwise a solid October chiller. 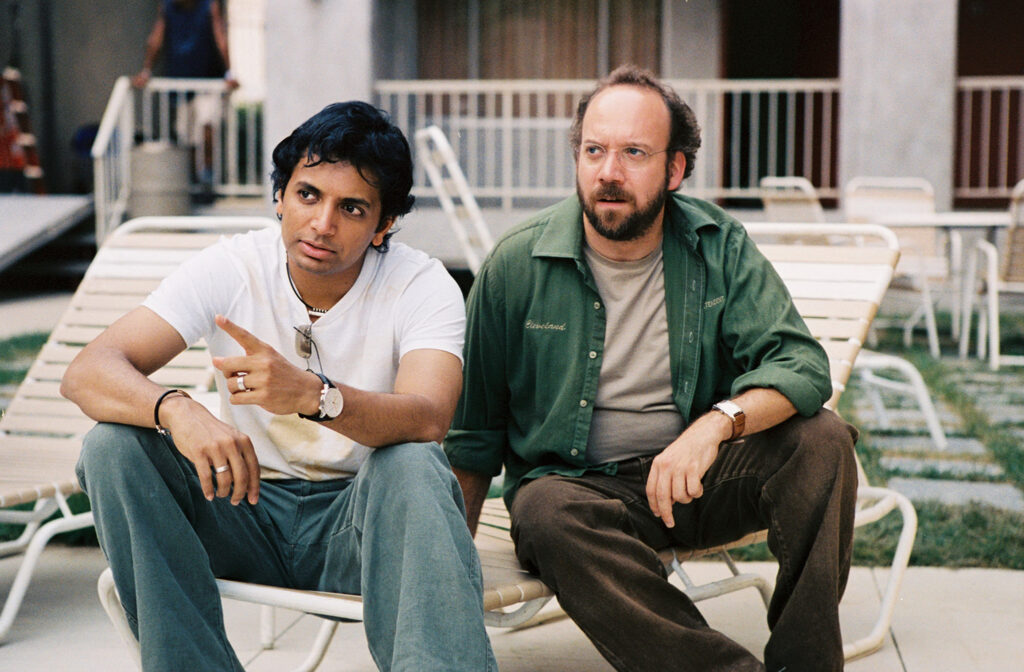 M. Night Shymalan’s plodding aquatic fantasy is obsessed with storytelling, going so far as to name the titular Lady “Story.” Though the visionary writer character played by Shymalan itself is certainly eye-roll-inducing, it’s hard not to have fun with a cast that includes Paul Giamatti, Bob Balaban, and Broadway legend Tovah Feldshuh as the working class residents of a Philly apartment complex. 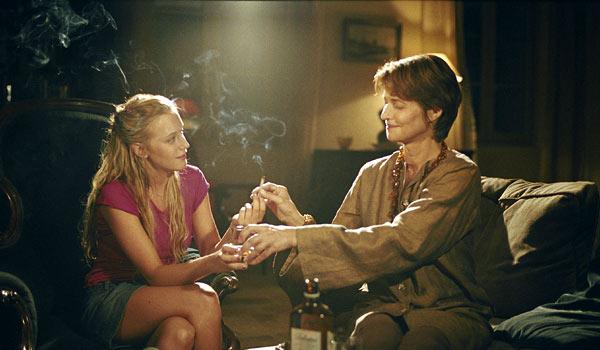 This makes a fun bookend with The Shining—Charlotte Rampling is a prim mystery novelist whose publisher offers up his French estate as a writing retreat. Things go very French and very off the rails when his sexually liberated daughter shows up to stay with her. Besides some woefully inaccurate depictions of the publishing process, it’s a tightly-crafted, tense mystery.

Celia Mattison lives in Brooklyn, where she works in publishing and writes about film, fiction, and dead media. You can follow her on twitter @CeliaMattison.
https://twitter.com/CeliaMattison 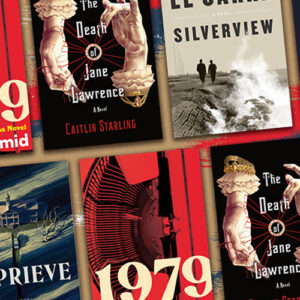