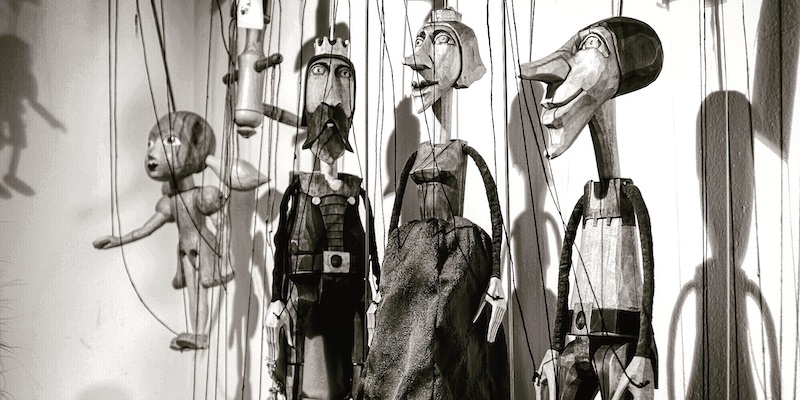 "Because who doesn’t love a puppet, with a wriggling, uneasy love that might be terror?"

In The Mirror Dance, (Dandy Gilver No.15) I tried my hand at a locked-room mystery. Sort of. It’s not a room and it’s not locked, but it’s close. A Punch and Judy man—a Professor, as they’re known—has his throat cut mid-performance while dozens of audience members watch the booth, which is plonked in the middle of an empty expanse of lawn.

I’ve wanted to write about a Punch and Judy show for a while now. The image that inspired me was my detective—handily present on a Bank Holiday outing—untying the tapes at the back of a striped booth and seeing not only a slumped Professor, clothes darkened by his life’s blood, but also two shelves of grinning puppets who are the only witnesses.

Because who doesn’t love a puppet, with a wriggling, uneasy love that might be terror? I know I do. (My favorite episode of Buffy is the one with Sid, the ventriloquist’s dummy, and his clattery little feet. He’s a great character. I reckon he could have had a spin-off.)

The other puppet I was determined to give a scene-stealing cameo to is Scaramouche. He doesn’t appears in many P&J shows these days. That’s a pity. In amongst all the bright colors, sausages, crocodiles, and domestic violence played for chuckles, the presence of a silent, cloaked figure who might be the Devil, or God, or Justice, or Death, must have been as effective a “something for the mums and dads” as the rude bits in Pixar are now. Especially because Scaramouche didn’t do anything except stand still while his neck lengthened and lengthened until his head disappeared above the proscenium arch. What a counterpoint! He was the perfect sombre relief amidst the Tom-and-Jerry whoops-a-daisy of dropped babies and rolling pins. Much as I relish P&J shows that retain their Scaramouche, though, I’ve never wanted to own one. I’m not as brave as I was when the Pelham versions of Hansel and Gretel hung over my bunkbed. My current house is too draughty; they’d never be still.

It was only the rule of three that decreed I had to have puppets turn up one more time in The Mirror Dance. (The book is much more “about” a publisher of girls’ and women’s magazines and the backstage staff of a variety theatre.) This third scene was the one that gave me the willies. When I wrote my detective and her sidekick entering a boardroom and finding two P&J puppets already at the table waiting for the meeting to begin, I considered throwing a shawl over the posse of friends that sits on my writing desk. 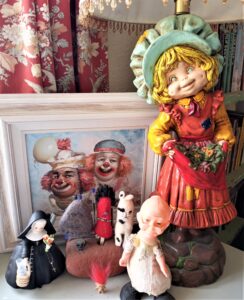 I’ve got other friends, with pulses, who don’t care for any of these treasures: fellow-writer Eileen Rendahl got the clown picture for me and had to keep it locked in the shed until it was delivered; fellow-writer Jess Lourey said, when she was coming to stay overnight, “Don’t put that shell doll in my room.” I said, “I don’t need to. She knows the way.”; and the finger puppets? One of my baby nephews reached out to take one once, then reconsidered and ran for his mum.

They don’t usually bother me. Nor do the gonk or the lamp, although even I have to admit “that chile ain’t right”.

The puppet that did once seriously unsettled me is the guy we call Swallowman. He sits in the kitchen and eats coins if you put them in his hand. He also eats spaghetti hoops, beans, and bogies. Thank those nephews for that piece of research. The problem with Swallowman started when we kept him on top of a pile of paperwork to stop it blowing away when the windows were open. I had always moved him now and then—to get a bill or a leaflet out from underneath—but I think, or at least I hope, I stopped paying attention to how I replaced him. I really do hope so. All I know for sure is that there was a spell when I’d  regularly come into the kitchen to find Swallowman facing the wrong way. I’d turn him round and laugh. (Laughing at the demons who’re trolling you with such a light touch kills them dead. True fact.) A couple of times, he turned back shortly afterwards. Of course, there were two of us in the house so a rational explanation was at hand. Except for once, when I was alone. And I don’t think about that night if I can help it. 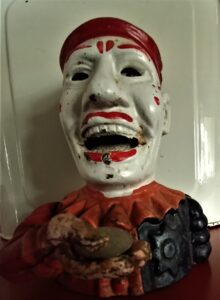 If he was bigger, life-size say, I couldn’t keep him. I’m full of bravado until something is too big to stamp on. A tailor’s dummy, an automaton telling fortunes in a booth, even a jumbo piñata, are in a different league from my sweet little button-eyed gang and the pirouetting Swallowman. In fact, one of the worst frights I’ve ever had in my life was at a B&B in the Lake District when the puppet was big enough to take me.

In my memory, we arrived during a thunderstorm, fork lightning and all that, and the woman who checked us in had a lantern. Nonsense, of course. It was a bight grey rainy Lake-District day and she had an apron and a walkie-talkie.

But the rest is true. The puppet, or dummy, or whatever it was, stood at the turn of the stairs, head coquettishly to one side, hands demurely folded in front, dress hiding her feet (or the fact that she was hovering, I remembering thinking). What I wanted to say was, “Why in the name of all that’s holy have you got a three-foot-tall extra from the crocheted version of The Shining lurking on the half-landing with that grin on its face?”  What I actually said was, “Nice doll,” the same way you would whistle as you passed a graveyard. The woman with the apron and the walkie-talkie went kind of still and said in a blank voice, “It’s not a doll”.

I dreamed about her that night, mixed in with talking tree-roots and a lot of dead rabbits. (Beatrix Potter’s fault.) But when I woke up in the morning I was fine. And I would have stayed fine except for the fact that when I opened my bedroom door, the leering, simpering, passive-aggressive hell-puppet was right outside, facing me.

‘Sorry!’ said a voice and a chambermaid grabbed her by the neck, cocked her like a rifle and wheeled her off. Have you guessed yet? The B&B was old and quaint and short of cupboard space, so the half-landing was the most convenient place to keep the vacuum cleaner, cleverly disguised à la bog-roll crinoline. The only drawback, I think, was how annoyed the owner got when guests drew attention to the ruse with sarky compliments.

The rule of three, if it operates in reality like it operates in comedy and fiction, means that I’m due one more puppet-related fright in my lifetime. If it happens between the time of writing this and the publication date of The Mirror Dance I will add it in the comments section. And I’ll stop waiting. Finally. 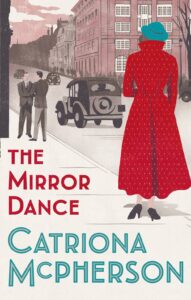 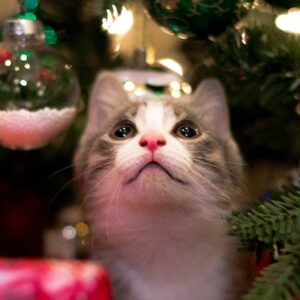 Christmas-themed cozy mysteries bring back the warm, fuzzy feelings of our most treasured Christmases. Many of them also...
© LitHub
Back to top