Reading Rebecca in
the Time of Trump

On Anger, Election Cycles, and Writing a Crime Novel

In the fall of 2016, smack dab in the middle of the most distracting news cycles in modern history, I had the itch to write another novel. Yet every time I’d get a bit of momentum, an election-related news alert would flash across my screen and shatter my concentration. Then Donald Trump won and my creative juices curdled. I’d write a few pages of something new then suddenly maim a guy, or break his heart for some psychotic reason. Sometimes I murdered; always a man. Death had been a spice in my books—car accidents, suicide—but never murder. It was as though anger was a new superpower I didn’t yet know how to harness.

Where do writers get their ideas? For me the genesis of a book usually begins less with a feeling—like anger—than with answering a vexing question. But it’s not enough to ask the question. Your characters have to want to answer it. That’s how things come alive on the page. The characters start making moves. You follow them around, tossing obstacles and dilemmas in their path to see who they really are, what they’re made of. After a while, you have a novel. This is what makes the process so enticing in the face of so much rejection and failure.

I struggled to appreciate them as I once did, as elegant commentaries on, as opposed to celebrations of, rancid misogyny. Don Draper was a letch, Al Swearingen a psychotic despot.

Still I was stalled. I went on input mode, re-watching Mad Men and Deadwood, shows that feel like reading because they have the gorgeous density of a lesser Russian novel. Yet that fall, I struggled to appreciate them as I once did, as elegant commentaries on, as opposed to celebrations of, rancid misogyny. Don Draper was a letch, Al Swearingen a psychotic despot. Then I popped in an Alfred Hitchcock DVD, Rebecca, a favorite, and all my ire came into brilliant focus, as did, finally, an idea for a novel. I had my ‘what if’ question.

In case you’re one of the few unfamiliar with the plot, Rebecca, both Alfred Hitchcock’s movie and Daphne du Maurier’s classic bestseller upon which it’s based, opens with an unnamed narrator’s lament about the lost world of Manderley, a home to which she and her husband can never return, a world of rare opulence and severe class division, where men rule and women obey. Our unnamed narrator first meets Maxim de Winter, a wealthy widower, while vacationing in Monte Carlo. She’s a pauper working for a rich American woman. They fall in love, quickly marry and head to Manderley, where everyone, including the creepy housekeeper, Mrs. Danvers, is consumed by memories of Maxim’s first wife, the beautiful dead Rebecca. The inability to live up to Rebecca’s legacy drives our narrator mad with jealousy. After a ball, and a devious costume stunt orchestrated by Mrs. Danvers, Rebecca’s body resurfaces, along with the truth about her life and death. Maxim reveals to the narrator that Rebecca didn’t drown, she died during an argument. He admits he never loved Rebecca; she was all façade, her beautiful, accomplished surface hiding a rancid character.

Here is where the movie diverges dramatically from the book. Due to production codes at the time, in Hitchcock’s version, Rebecca’s death had to be accidental. Maxim confesses that she hit her head and died after an argument over her sexual depravity. His subsequent cover-up was the actions of a desperate man, a victim really. The narrator is overjoyed; Rebecca is a bad woman! He never loved her! The movie goes from thriller to love story as we root for Maxim to get away with murdering his promiscuous wife and for our unnamed narrator to have her happily ever after. Because I came to the movie first, I had remembered Rebecca as a love story. Quickly, furiously I re-read du Maurier’s book, practically throwing it across the room in a rage, realizing, of course, that what really happened to Rebecca is every woman’s nightmare.

In du Maurier’s version, when Rebecca’s body resurfaces, Maxim admits to our trembling narrator that he murdered his wife in a blinding rage, shot her for the crime of insisting on her sexual freedom and for possibly carrying another man’s child. How could I forget this detail, made more chilling by the young narrator’s response? Far from being terrified, she is, again, overjoyed. Again, our narrator rallies to his defense, this time helping him cover up a murder, becoming his accomplice, along with the reader, who, if you were anything like me, still wants Maxim to get away with it. This is what makes du Maurier’s novel so subversive; she indicts the narrator and the reader, each of whom is guilty for siding with Maxim, a bad, bad man, whose second wife loves him more, not less, for his crimes, though eighty years ago, you could hardly blame her.

In retrospect I suppose I was also trying to answer another vexing question: why did so many women—so many white women—vote such a bad man into the highest of offices?

The question that popped into my mind was: what if a young woman today faced a similar set of circumstances? How would she behave? And who would she believe if the man she loved, who saved her from penury, told her one thing about his first wife’s death, and his teenaged daughter something else altogether? In retrospect I suppose I was also trying to answer another vexing question: why did so many women—so many white women—vote such a bad man into the highest of offices? And why do so many still stick by him despite one awful revelation after another?

I closed Twitter and began to write The Winters, the novel I seemed to need to read in these dark days. In my retelling the women have changed, but the men, especially rich, powerful (white) ones, have not. It’s a dynamic we’ve seen played out over and over in the news and in the #metoo movement, which was just starting up that winter, where we continue to see the extent to which men are still living out their Mad Men fantasies.

In The Winters an unstable fifteen-year old girl named Dani, consumed by memories of her perfect dead mother, has a story to tell. But her youth and mental state render her an unreliable narrator, as is the case with so many women who are easily dismissed, called liars, told they are making things up when they finally gather the courage to tell the truth about what happened to them. My own narrator must navigate this uneasy terrain, a problem made worse by social media, the distorting lens through which we see ourselves and each other. In the end, I believe I wrote a book about what happens when we believe women, and also when we don’t. And I began to understand why women, (white women), voted for this administration and continue to prop it up. They believe they’ll benefit from, and be protected by, those to whom they’ve handed their power. But they would do well to learn from Rebecca, a woman who paid the price for taking her power back, and for aligning herself with a man who easily disposed of her once she had the temerity to defy him.

When I finished writing The Winters, I was still angry, but I’ve begun to channel my rage in other directions, like going to rallies, and donating money to causes working hard to keep women from falling back to a time when we have less autonomy over our lives and bodies.  Eighty years ago du Maurier warned us that we can never go back to Manderley again. But the biggest question of all is, what if we’ve never really left? Isn’t that something we should all be angry about.

Lisa Gabriele is the author of two literary novels. Her writing has appeared in Glamour, Vice, and Salon as well as various anthologies, including The Best American Nonrequired Reading. She lives in Toronto, where she is an award-winning television producer. Her latest novel is The Winters, now out from Viking Press.

The Art of the Feminist Thriller 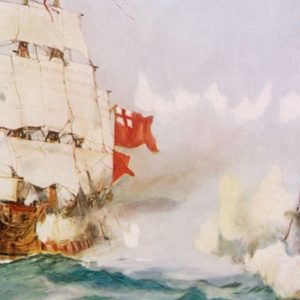 The two years between April 1717 and March 1719 were the most dramatic period in the history of piracy in America. At various...
© LitHub
Back to top