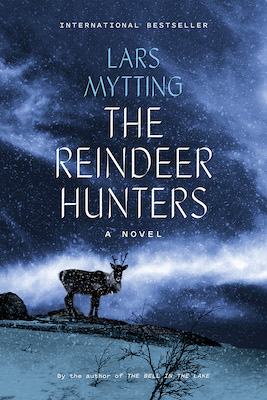 The following is an exclusive excerpt from The Reindeer Hunters, by Lars Mytting, translated by Deborah Dawkin. In the following passage, set in the late 19th century, a prayer book's mysterious antics in a church seem to indicated the building is haunted.

There was one man who had lived with the stave church’s ancient smells and creaking sounds for so long that he knew its every quirk. He tended to the cold smell of old tar and pine every day, as a fearless but respectful beekeeper tends to his hive. This man was the churchwarden, Karl Gustav Emmerich. As a young carpenter’s apprentice, he had been present for the entire rebuilding of the church. He was among the few men who had got to know Schönauer, and among the even fewer mourners at his funeral.

The nearer the church came to completion, the more it seemed to close about him like a home. And when the other carpenters packed up to go, he stayed behind to work on the final, niggly details for which nobody else had the patience. He spun out time, and when the stave church was consecrated, he was still busy, changing window putty for something more neutral in colour, putting wooden pins where a poor craftsman had used iron nails, and he slipped almost invisibly into being the churchwarden.

In many ways he was like Herr Røhme in Butangen. A man of few words, underpaid, diligent and multiskilled, a man in overalls who ate lunch alone and who put all his love into this crooked and fickle building. When the day was over, he liked to sit on the bench outside as the church mirrored itself in the surface of Lake Carola, and watch it change shape with the ruffling of the wind on the water. Once he thought he saw a figure staring out of an open hatch in the bell tower, but when he turned and looked up, there was no figure and the hatch was, of course, closed.

He had never actually seen Halfrid. She had been hung according to Schönauer’s wishes, in line, he assumed, with old Norwegian lore. When they hoisted her up into the tower she was wrapped in canvas, and Emmerich had to go up into the berry alone, pull off the canvas with closed eyes, then hurry back down. Years ago Emmerich had needed to go up there to chase away a kestrel that had nested there, and again he had draped the canvas over the bell, while looking the other way.
As time passed, Emmerich got the feeling that more had come with the shipment from Norway. This feeling came to a head at New Year’s Day Mass, 1883. The church was full, and the sermon was well received, even if the priest’s delivery was a little faltering, and in recognition of the church’s origin they tried to sing three verses of “Stille Nacht” in Norwegian.

As Emmerich bid farewell to the congregation at the door, he heard something that gave him pause to think. A well-dressed couple, both wearing very heavy woolen coats, complained that it had been terribly cold where they had sat. Still shivering, they pointed to the spot, on the furthest end of a pew closest to the wall. He promised to investigate, but had no idea what could have caused it. The weather was mild for the time of year, and nobody else had complained. He concluded that one of the timbers might have warped to create a gap in the outside wall.

The priest and organist never paid him much attention, so he locked up and ate his lunch in solitude, slices of rye bread with cheese and a drop of coffee. Then he stretched out on a pew and took forty winks, a practice adopted by many a canny church- warden, since by the time he wakes up the water or snow that the congregation have brought in on their shoes will have dried.

Later, as he pushed the broom down the aisle, illuminated by the dappled light from the tiny glassless windows high above, he became aware of a forgotten hymn book. It was lying exactly where the couple had said there was a draught.
He put down his broom, sidled to the wall end of the pew and noticed that there was indeed a cold draught there. As he sat down he seemed to hear a whisper. Or was it a soft croon?

Whatever the case, it was in another language. Not hostile, not frightening, although the voice appeared to come from inside the wall. Then it died away, and with it the icy draught, and he picked up the hymn book. Written in gold letters on the black cover were the words Landstads Kirkesalmebog. It seemed to be in Norwegian or Danish.

But the couple who had sat here – surely they were German?

He put the hymn book on a shelf in the porch, in case someone came back for it, and swept the event from his mind just as he swept the floor clean.

At the next New Year’s Mass in 1884, the hymn book turned up again in the exact same place, the place Emmerich would eventually name die Fröstelstelle, and which the organist called die Gruselbank. This time it lay open at Psalm 130. Emmerich said nothing, assuming that the organist had given way to some bizarre urge to make fun of him.

Some months later, old Professor Ulbricht came to give his annual tour of the stave church for architecture students. Emmerich rarely listened to these talks, he’d heard it all before. But he pricked up his ears when, in answer to a question from a particularly inquisitive student, Ulbricht told a story which Emmerich had never heard before. A story so grotesque, Ulbricht warned his audience, it could hardly bear the telling. The church had been viciously cold during the Norwegian winters, with temperatures often dropping below thirty degrees on Herr Celsius’ scale. One morning, during a New Year’s Mass, just before the church’s transfer to Dresden, an old woman was said to have frozen to death. He went on to describe how the men always sat on one side of the aisle and the women on the other, and raising his arm he pointed to the spot in which she had probably died.

He was pointing straight at die Fröstelstelle.

It was during Christmas Mass one year that the problems began in earnest. It was Emmerich’s responsibility to hang the hymn numbers up on the board. But when the service was underway, it turned out that he had inadvertently swapped the numbers about, so that the congregation began singing hymn number 130, “Aus tiefer Noth ruf ’ ich zu dir”, while the organist played hymn number 140, “Lobt Gott, ihr Christen allzugleich”.

He shuddered at his mistake. But there it was, number 130, in white numerals against a black background! Before the next Mass, Emmerich checked twice over that he had the correct numbers, but still there was confusion. Again the numbers had been changed, and the congregation tried to sing hymn 130 to the wrong melody on the organ. And worse still – this time another hymn number had been altered, forcing the organist to stop a second time and come down from his stool to tell every- one what they were actually meant to sing. Emmerich wished the floor would swallow him up.

When the church was empty again, he took the numbers down from the board. He sorted them, put them back in their case, and closed the lid. The he walked back along the rows of benches. And there it was. Again. In the same place. Die Fröstelstelle. The old Norwegian hymn book. Landstads Kirke¬ salmebog. Open at hymn number 130. He spelled out the title of the hymn, “Her kommer dine arme smaa” written by a certain A.H. Brorson.

This time he left it lying there. Went home to his lodgings. And slept badly.

On his return the next day, he spelled his way through the words. There were no melodies in the hymn book, and he spent the next few days leafing through books of church music and a three-volume work on German songs, hoping to find a version in German. Without success. Reluctantly he had to involve the organist, who on the evening of the sixth day of Christmas finally found it in a Danish hymn book from 1853, and thought, or hoped, that it might go to the same melody as the German hymn “Den süssen Schlaf erbitten wir” by Schulz, known to the organist from a pamphlet of family devotions for the evangelical Lutheran colonies along the Volga.

The New Year’s Mass was about to begin. The melody was not approved for church use. But without the priest’s knowledge, and as the congregation stooped through the portal and Halfrid rang above their heads, the organist played the melody he hoped belonged to “Her kommer dine arme smaa”.

Now, at last, the hymn board was left in peace.

From then on, the organist played the melody before every New Year’s Day Mass, and sometimes on an ordinary Sunday too. Emmerich thought the matter was resolved, and was relieved not to have to tell the priest what he had thought was happening. But then the usual organist tittle-tattle began to take hold, and what Emmerich had feared now happened. Rumour spread that there was a Lutheran ghost in the church, a story that was shared with glee, since spiritualism was now an important talking point in every drawing room across Europe. And soon after Ulbricht’s tour the name of the woman who had frozen to death also surfaced. Her name was Klara, he was unsure of her surname, it was impossible to pronounce, but he thought it began with “Myt”, and that was enough for her to be nicknamed Mystische Clara, or sometimes Mytische Clara. Klara was commonly spelt with a K in Germany, but Clara stuck, because the C seemed more refined, and hinted at a younger woman with a certain physical allure. Klara Mytting was soon resurrected, but she was now quite different from the woman who had trudged hunchbacked through Butangen year after year, with the water-yoke weighing her down. Instead, the Dresden residents transformed her into a graceful Madonna in flowing robes. Emmerich suspected that Klara had nothing against this herself, after all, even she must have been young once, and the dead are free to choose their age when they return as ghosts.

From THE REINDEER HUNTERS by Lars Mytting, translated by Deborah Dawkin. Copyright ©2022 by Lars Mytting. Reprinted by permission of the publisher, the Overlook Press. 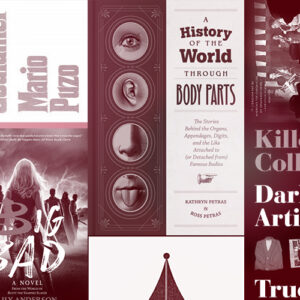 The CrimeReads 2022 Holiday Gift Guide, Part 2: Coffee Table Edition A couple of weeks ago, my colleague Olivia Rutigliano created a fabulous list of gift items perfect for the mystery fan,...
© LitHub
Back to top