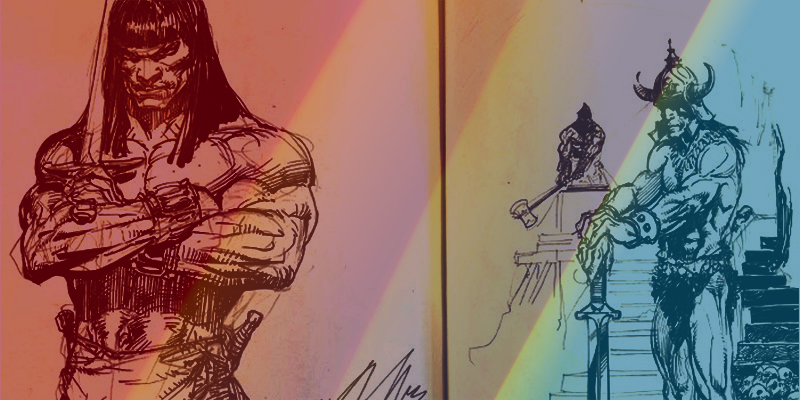 The passing of comic book maestro Neal Adams is a real fist-to-the-gut for his many fans—and if you bought a super-hero comic anytime between 1967 and 2021, you were a fan. Since Michael Barson and Hector DeJean were among the throngs who consider Adams to be as talented as he was prolific, they thought they’d share some of our favorite career highlights of his.

HD: I’ll go first: I’ve gushed about Deadman in the past, but it’s a jaw-dropping achievement, and more of a series of pulpy crime short stories than a typical superhero comic. The story is the now-familiar tale of a murdered man whose ghost is trying to track down his killer–and the ghost has the super power of being able to enter people’s corporeal forms and control them-just like in that movie, what was its name? Yeah, ‘Ghost.’ The concept is fine and dandy, but it all takes place in that wonderful world of tough guys, gun-toting goons, and dangerous dames, the broken-streetlight alleys leading to pool halls, mob dens, and other stops on the road to nowhere. The whole thing is loaded with atmosphere and gorgeously drawn, and the layouts are still ingenious even to this day–I would love to know where Adams got the ideas to set up his pages like that.

MB: This is a clear case of a comic strip that was five years ahead of its time… or ten, more likely. As you point out, Deadman was grounded in a neo-realistic world of criminals and evil people, and not in a superhero universe where he battled super-powered villains or aliens. Here Deadman was the only Otherly being.

Adams’s hyper-dramatic art approach was grounded in the realism he had learned to master in his daily newspaper strip Ben Casey, only now with the conventional panel borders blown to smithereens by his iconoclastic layouts. It may have been a little much for the average 12 year old to process,.. But those 12 issues of Strange Adventures (205-216) certainly left their mark.

HD: I feel like Adams would still be a comic book legend even if Deadman was the only thing he did.

MB: Just as Jack Kirby served as the gateway drug to the entire Marvel line in the first half of the Sixties, DC quickly learned that Neal Adams was just too good not to deploy universally as their primary cover artist. Beginning in 1967 his dramatic covers breathed new life into moribund franchises ranging from Action Comics to Worlds Finest to House of Mystery/House of Secrets. 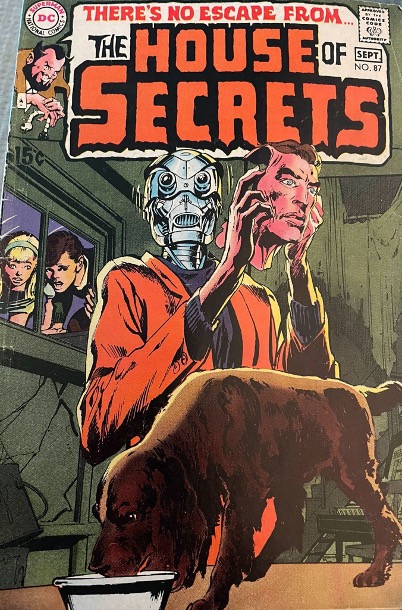 But the rebirth of DC really began when Adams was assigned the teamup title The Brave and the Bold. That was where his transformation of Batman into THE Batman first took place. Those Batman teamup issues ranged from the sublime—The Spectre, Deadman, Phantom Stranger, Green Arrow—to the occasionally eye-rolling (Metal Men?). But that was enough for the DC braintrust to knight Adams as chief cover artist for the prestigious Batman and Detective Comics titles as well.

For this article I reread two of the Adams teamup issues I remember buying in 1969– Brave & Bold 86 with Deadman and Detective 404 (a tribute to Joe Kubert’s wonderful Enemy Ace). Both are drawn exquisitely, but it’s the Deadman issue that truly brings out Batman’s detective skills as an integral part of a semi-supernatural plot line. 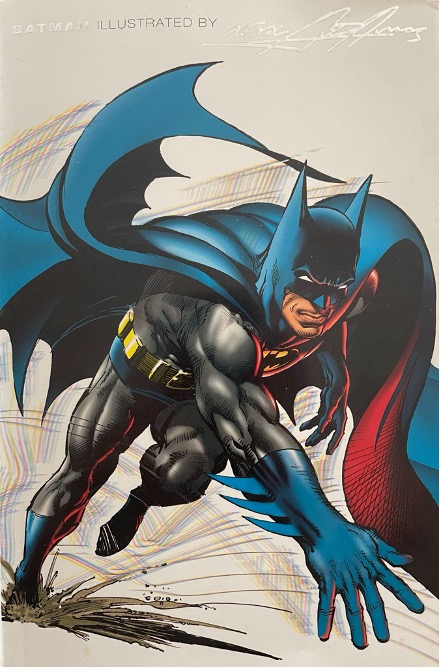 Collaborating with writer Denny O’Neil and inker Dick Giordano, Adams managed to vault DC back into the game against the Marvel behemoth—a game it hadn’t really been in since 1962. But with Marvel weakened by the departure of Steve Ditko in 1966 and Jack Kirby himself after 1969, the balance of power shifted in a seismic way. By the time the Seventies dawned, DC was back to being a co-leader in the industry. And the lion’s share of the credit for that must be laid at the feet of Neal Adams.

HD: DC was a company that firmly believed that covers sold comics, which is why they made Carmine Infantino–their most popular cover artist–the editorial director for the entire DC comics line. And when Adams became DC’s cover heavyweight, he found a real sweet spot on horror titles, with my personal favorites being those Phantom Stranger covers. He got to show off yet another side of his technical proficiency–his mastery of light and shadow. The covers had this dimly-lit, spectral quality that makes those comics look like they contain the greatest campfire ghost stories ever. And with issue four, he drew the interior, updating the costume of the Stranger himself, giving him the more modern look with the turtleneck and the medallions.

Issue #10 is a perfect example of Adams dishing up an enticing helping of the macabre–the figures are wonderfully drawn as usual, the atmosphere is eerie, and the whole thing pulls you right into what feels like the first scene of a perfect gothic tale. 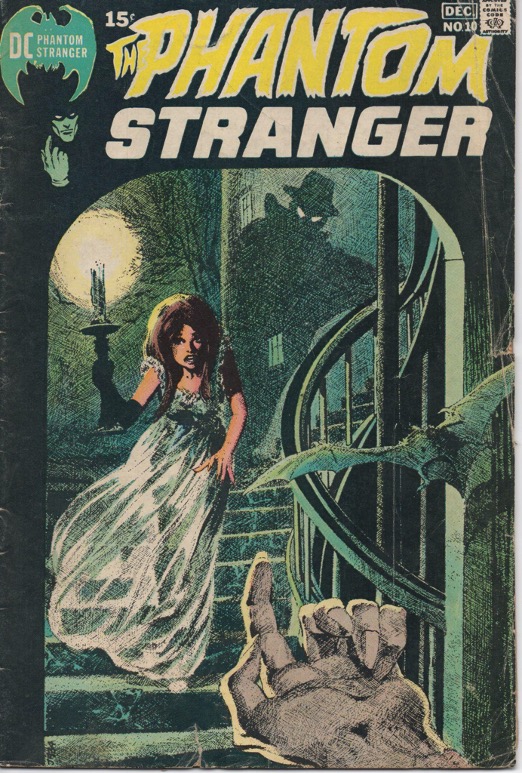 MB: It’s so interesting that the gritty, noirish world that Adams rendered so masterfully in his reimagining of The Batman could morph into the realm of the supernatural so effortlessly in titles like Phantom Stranger and Spectre, along with the House of Mystery/House of Secrets anthologies. That is not a capability shared by many of even the greatest comic book artists. Jack Kirby was never especially persuasive when trying to render a supernatural mood. Steve Ditko was peerless at depicting the supernatural, but was pretty helpless when called on to portray any sort of realistic setting. Steranko, Barry Smith, Frank Brunner—all are shining examples of contemporaries of Adams who each could portray ONE kind of world wonderfully well, but not the other.

Only Adams was able to move between and among different genres and settings and styles with such (apparently) effortless mastery.

HD: And yet another genre that Adams nailed was sword & sorcery.  His artwork for Marvel’s Conan is a pleasure, though there’s not much of it. Not sure why, because Adams would have been perfect for a long run on this title. As it is, he only seems to have done one issue, but it’s a beauty. The Curse of the Golden Skull in Conan 37 has wonderful otherworldly settings and a great rendering of the Conan character that sticks to the version other artists had established while adding Neal Adams realism to the movements and the poses.

He drew about three other Conan stories for Marvel’s Curtis Magazines line, an imprint that put out black and white comics that didn’t need the approval of the comics code. And he filled several sketchbooks with sword-and-sorcery drawings, many of which feature Conan, so I wonder if he wanted to do more with that character. Those stories really let artists go crazy with their imaginations—as long as there’s a long-haired muscular guy with a sword standing in the center of the scene, you can draw anything you want around him.

MB: That is absolutely wild—I had no idea that Adams had even ventured into Conan territory! Just that one issue, #37… what an alternate universe might have opened up if he had drawn another thirty or so issues! Which begs the question: Which Marvel title from the Seventies would NOT have benefited from a friendly takeover by the sublime Adams?

That “What If?” scenario actually DID happen twice, with Adam’s brief runs on two of Marvel’s key franchises, the X-Men and The Avengers. The X-Men had slid into near total irrelevance, hamstrung by some of Marvel’s weakest artists and writers. But in 1969 Adams was invited by writer/editor Roy Thomas to take over the book for nine glorious issues, between #56 and 65. Aided by elite inker Tom Palmer, he produced some of his career-best work here. According to Thomas, even Stan Lee didn’t know what to make of Adams’s revolutionary designs some of the time, and more than one cover was spiked for being TOO far-out. But this was the best run of X-Men since Kirby’s first eleven issues.

The other dream scenario at Marvel took place a year later, when Adams took over The Avengers. He appeared out of nowhere in the midst of the Kree/Skrull war storyline, submitting a half dozen gems between issues 92 and 97. Again, you have to ask yourself—what might Adams have wrought if he’d had time (and hands) enough to pen another 40 or 50 issues??

HD: And while we’re talking about fantasy characters and unfettered imagination, I also wanted to mention yet another branch of Adams’ artistic output—he actually drew the posters for a short-lived Broadway play featuring super heroes and cosmic battles. The play was called WARP!, and Adams did the sets and some of the costumes as well. They eventually made a comic out of it, but for some reason Frank Brunner did the art. I’m not complaining, I love Brunner’s art, but it’s another what-could-have-been comic for me.

MB: I guess I will close by giving a nod to what is likely considered the apex of the Adams partnership with Denny O’Neil, the Green Lantern/Green Arrow issues they created from #76 to #89. Energized by the positive reception to their Batman/Green Arrow teamup in B&B #85, Adams and O’Neil simply blew the doors off the industry in 1970 with their masterful demonstration of topical, cutting-edge storylines amplified by peerless artistry. The apotheosis probably came with the story in issues 85 & 86, when Green Arrow’s ward Speedy is revealed to be a heroin junkie. It’s hard to think of a Marvel title being published at that time that carried half the impact of that essential series. (I still can’t believe I used to buy these issues for a mere 20 cents…) 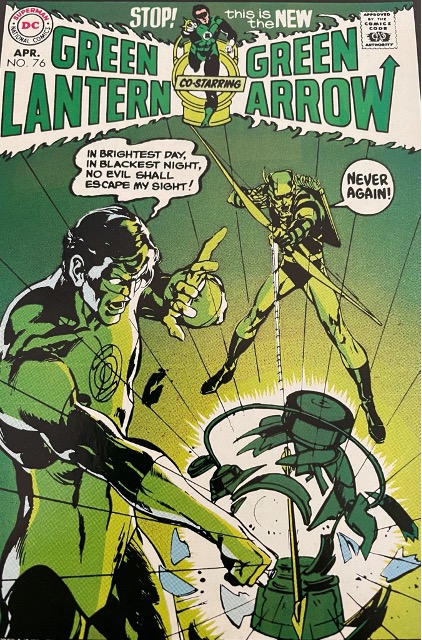 HD: Yeah, you can’t talk about Neal Adams without mentioning the Green Arrow/Green Lantern books. Iconic stuff in so many ways.

Michael Barson is senior publicity executive at Melville House Publishing. Hector DeJean is Associate Director of Publicity at Minotaur Books. They are both die-hard fans of comics. 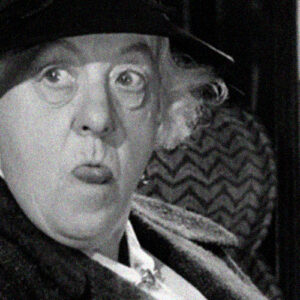 Note: This article contains hints and occasional mild spoilers for the solutions in Agatha Christie’s A Murder Is Announced,...
© LitHub
Back to top