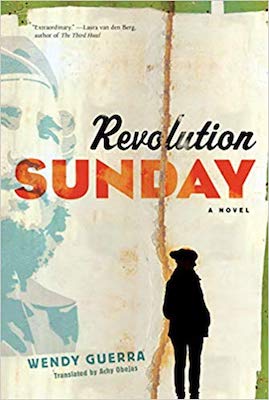 The following is an exclusive excerpt from Revolution Sunday, by Wendy Guerra, translated by Achy Obejas, a tale of surveillance and secrets from one of Cuba’s rising new voices. In the following passage, the alienated and spied upon protagonist is visited by a handsome actor who possesses startling new information about the protagonist’s family past.

There he was. The man at the door was none other than Gerónimo Martines, the famous Hollywood actor from Nicaragua. He showed up as if I was waiting for him. Naturally, I welcomed him with a kiss, this Gerónimo who, in this heat, was not exactly the same Gerónimo I’d seen in the movies. He was swimming in sweat, tired, and seemingly lost. What was he doing here? Would he read my poems in.  . . ? No, I couldn’t believe it.

“Hello,” I said as I pulled him inside, where it was illuminated and the light seemed to underscore the impression that I had been waiting for him, or at least waiting for something equally important to shake up my story and take me in another direction, to another turning point, the kind that come now and again in life (every ten minutes), when someone wants something and something or someone becomes an obstacle . . . That’s why I recognized him without knowing him, and in spite of the pitch blackness around him on the street, I’ll say it again: Even though he didn’t look like Gerónimo Martines, I recognized him.

The actor decided to play along with an attitude that said you-act-like-you-know-me-but-shut-up-now-I’m-tired and, though we’d never seen each other before in our lives, we managed that odd whirlwind of emotions. He treated me with familiarity, addressed me casually, and was comfortable by my side. He was wearing a blue sports cap with English lettering, his hair (practically an afro) bulged out at the sides, a comfy-looking loose-fitting black track suit, and a white T-shirt like the kind I wear to sleep. I thought he was overdressed for these temperatures. His sports shoes made him float down the amber hallway and he was so tall that he almost hit the art nouveau hanging lamp in the living room. When the pendulum light bonked him, that’s when I thought I’d welcomed Archangel Michael of the Bronx into my house.

“Do you want some gazpacho?” I asked him, following a script from another life.

“Do you have anything stronger?” the actor improvised, now starring in a new chapter of my personal series. His voice was deep. He was rude without being rude. Fringy without being fringy. Yet also smooth as silk, elegant, and a little childish. His accent was very pronounced but he spoke perfect Spanish, a childish Spanish, very musical, perhaps from his mother; I don’t know. I showed him my improvised bar in the cupboard and he chose a bottle of Havana Club dark rum that had been forgotten since the last New Year’s Eve I’d spent with my parents. As I passed by him and caught a glance of both of us in the enormous mirror that separates the kitchen from the dining room, I realized I was still in my underwear. I excused myself, went to my room to put something on, and returned more or less dressed.

I watched him slowly, calmly, as he drank his rum: He, in turn, watched me savoring the gazpacho right from the blender. I stuck my hand in the jar over and over, running my fingers along the bottom to pick up the lumps that had dripped off the blades. I sucked the broth with gusto.

“Well, say something,” I said, smeared with everything. He just smiled, meditating as he grimaced because of the rum’s acidity, and looking around at the house from his privileged corner. I realized it wasn’t that he was a man of few words, but rather that he was a deep and observant man, perhaps a little shy . . . or, perhaps, if he wasn’t saying anything in particular it was because he hadn’t come for any special reason. I didn’t care if he talked or not. My problem was that I didn’t want to be alone between the blackouts, stuck in the family mausoleum, so I went on as usual, as if my visitor was a longtime friend, the guy that comes by every afternoon just to chat. While the actor took his time and drank his dark rum, I washed the utensils, rinsed out my bathing suit, and hung it in the backyard, then swept up the sand I’d tracked in from the passageway around the house. I kept coming and going and he kept checking out the place, but without ever leaving his post. I offered him drinks straight from the bottle and brought out the few ice cubes that had survived the blackout. In the first hour of his visit, we did not speak a word.

Why the hell had he come, and who had given him my address? I don’t know, but there he was, calmly drinking my parents’ rum, closing that chapter I . . .

“I came to . . .” He tried to speak but the electricity went out again and I think it may have been for the best; it was easier to talk then. “I came so we could talk about your father. I want to make a film about him. I’m looking to start production.”

“Yes, if that’s okay by you, of course. I know you don’t remember him anymore but, for me, your version of events is important, or whatever you think happened. You’re his only daughter, I believe.”

“I came so we could talk about your father. I want to make a film about him. I’m looking to start production.”

“Your father, of course.”

“Executed him? Oh, for the love of God, no, you’re confused. Who are you looking for?” I said, guffawing, then laughing as anxiously as ever.

“Yes, pleased to meet you,” I said, holding out my hand from one side of the table to the other, clearing the darkness, touching him one hour after receiving him in my very own home.

“I came so we could talk about him.”

“About who? Define ‘him,’” I said as I lit a lamp from the literacy campaign, which my mother had kept around since the seventies.

“I’m talking about your father.”

“My father wasn’t executed. You’ve been given erroneous information. My father died in a car accident two summers ago,” I said, managing to give the dining room a bright and fiery light.

“Are you sure?” he asked, squinting and staring at me with his huge gray eyes.

“Are you absolutely sure?” he asked, now with a kind of villain look, delighting in a smile that hid his volatility.

“Can I use your computer?”

“Yes, of course,” I said, pointing the way to the office next to the kitchen. “But the blackout . . . we’ll have to use the laptop. Wait a minute.” I got up and came back with the laptop, turned it on, and put in a memory stick in the shape of a whistle, which he’d kept in his track suit’s pocket.

The half-light from the computer let me see his rude and perfect face much better. His pronounced cheek bones, the bleak light in his eyes, and even the purplish red of his full lips. There he was, typing away with his meaty fingers, scrolling through his writings, clumsy when it came to the art of finding information to show me who I was and how I fit into his story.

“Since the case of Cuba–U.S. relations isn’t closed, it was difficult to get this file from the State Department; it was part of the Cold War archives. There are still unexplained sources and circumstances connected to witness protection programs and other things.”

This disclosure confused me even more than the moment when he showed up at the door of my house. Now it turned out I had ties to the State Department? I had no words; I could only feel bombs exploding. Then he started to tell me about the things he hadn’t been able to study more thoroughly, but which were also related to the CIA and its Cuban connections. Oh my God, just what I needed. In the morning I’d wake up to the whole block cordoned off and the compañeros assigned to me in their white guayabera uniforms, full-time at my door. I’m going to have to cook breakfast, lunch, and dinner just for them until they figure out if I do or don’t have anything to do with this. Everything I make from my writing will go to feeding them, I thought, a little in jest and a little seriously.

Like a flashback about the future, or a thread of blood that drains and jettisons the story of my life with a dizzying effect, I knew I had been expecting all this for a reason I can’t elucidate right now, and I knew it would be a very long night. Seeing my parents’ rum had been consumed by Gerónimo in just two hours, I decided to get another bottle from the cupboard, this time a Santiago rum. I opened it, made an offering to whichever saint could help me in that moment, poured a little in a dining room corner, then very responsibly served us each a drink, no ice, neat. I was playing around, but I was serious too, handing him the glass and pulling it back, so he’d tell me what the devil I had to do with these State Department files and, to top it off, the CIA.

I finally gave him his drink. He asked for ice. I indicated the way to the fridge. He got up slowly then took a few steps toward the big white Russian polar bear that, at this hour, was pretty much defrosted. He must have found something there and came back with a few cubes in his glass and a few more to drown in the clearness of my drink. We stared at each other in the dark, and toasted.

Emma Lathen: A Crime Reader’s Guide to the Classics 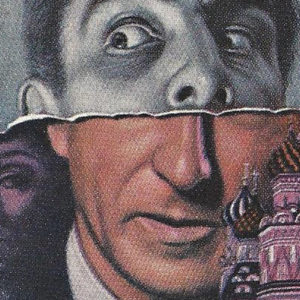 Emma Lathen: A Crime Reader’s Guide to the Classics In 1979, Dilys Winn, the pioneering writer, editor, and bookseller, who was one of the true doyennes of crime fiction, conducted...
© LitHub
Back to top