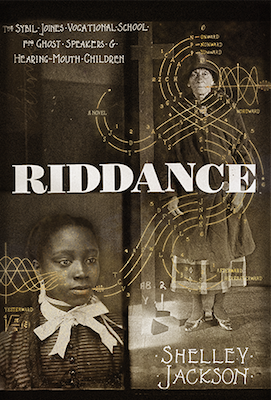 The following is an exclusive excerpt from Riddance, the first work in 12 years from experimental novelist Shelley Jackson, known for a novel entirely in tattoos. In the following passage, we learn of strange doings at the Sybil Joines Vocational School for Ghost Speakers and Hearing-Mouth Children.

I owe my discovery of the Sybil Joines Vocational School to a bookstore and a ghost.

Afternoon in a then-unfamiliar city, some years ago—heavy, overcast sky—the almost continuous grumble of distant thunder. I was in town for an academic conference, but had slipped out of the warren of little rooms in the ugly and prematurely dilapidated “new building” where the conference was being held and walked rapidly off campus into the deserted streets of the business district, feeling a little guilty about missing my colleague’s presentation, but unable to stand a moment more of our special brand of fatheadedness.

It was one of those melancholy downtowns not meant for walking, where the buildings take up whole blocks and there is nothing to be seen from street level except the stray sheet of paper listlessly turning itself over and over, or a street sign that suddenly starts vibrating and then as suddenly stops. It was with relief that I turned onto a block of small shops, though they were unprepossessing enough: a shuttered cigar store, a bodega in which an exhausted-looking man in a stained polo shirt consented to sell me a bottle of warmish water, and an unlit bookstore whose door yielded to an experimental push, revealing dark narrow aisles between leaning shelves, blocked here and there by jumbled landslides of books among which were many comfortable little hollows furry with what was probably cat hair—the place had an animal smell. A ragged floral towel curtained a doorway into the back of the shop, where something bumped and rustled.

I owe my discovery of the Sybil Joines Vocational School to a bookstore and a ghost.

I stooped to pluck out a book from a tightly packed bottom shelf, then withdrew my hand with a cry. A bead of blood was forming on the back of my finger. The impression that one of the books had bit me faded as the scrabbling sounds of a retreat made itself heard in the lower reaches of the shelves: the cat, no doubt, surprised in one of its hideaways. I stooped again and hooked a finger in the cloth binding at the top of the spine; the volume was stuck fast; I pulled harder and jerked it out, along with a neighboring book and a thin pamphlet, but felt the binding rip under my finger; guiltily I shoved it back in without looking at it, but had to get to my knees to retrieve the pamphlet (a 1950s-era educational brochure on hydroelectric dams) and the other book (an elocution handbook from the 1910s or ’20s), which had fallen open to a page where a newspaper clipping must have been used as a bookmark, printing the pages it was pressed between with its phantom image. Ghosting, it is called in the rare-book business, and that is apt, for this image was only the first of the ghosts that from this moment on would throng to me.

The clipping itself had slipped out. I looked for it, found it, brown and brittle with age, under my own knee, replaced it against its fainter double, and only then saw what it was.

The Cheesehill, Massachusetts, school for stammerers that has been so much in the news lately can add another death to its grim tally, and this time the verdict is murder.

It is our unpleasant duty to report the discovery of a charred body on the grounds of the Sybil Joines Vocational School for Ghost Speakers & Hearing-Mouth Children, recently in the news for the accidental death of a student, the second this year. The victim has been tentatively identified as Regional School Inspector Edward Pacificus Edwards, who had been reported missing the previous night after his duties took him to the Vocational School, his vehicle having been discovered empty some hours after he had been believed to have gone home. An autopsy confirmed the police detective’s opinion that the victim was already dead when immolated, having been struck with a blunt object from behind with enough force to stave in the skull. Observing no particular abundance of blood near the site, the police detective gave his opinion that the fatal blow was struck elsewhere, the body having been transported at some point during the night to this low-lying and densely wooded part of the school grounds and there set alight. The clothes and personal effects of the victim were presumably consumed by the fire. A bottle of paraffin was found beside the body.

To add to the macabre circumstances surrounding this grisly find, the Headmistress of the school, Miss Sybil Joines, was discovered deceased of natural causes in the early morning hours of the night in question. A representative of the school, Jane Grandison, stenographer, denied any knowledge of the Regional School Inspector’s whereabouts after about 4 p.m. when he left the  Headmistress’s office to conduct a final inspection of the grounds.

Her offer to attempt to contact the deceased, employing the method of spirit communication taught at the school, was declined by the authorities, who called it a “tasteless publicity stunt.”

The student who discovered the body was not available for interview but we have learned that her mother has withdrawn her from enrollment at the school, citing extreme emotional distress.

The police are interested in questioning a drifter seen loitering around the grounds earlier in the week.

I read, then reread the clipping, from which little polygonal shards kept drifting down to settle in the nap of the stained and smelly carpet. I had never heard of the Sybil Joines Vocational School. That alone would have pricked my curiosity, since I had flattered myself that I knew quite everything  there was to know about the spiritualist movement in late nineteenth to early twentieth-century America. But my discovery also resonated with another of my research interests, the proliferation and popularization of what one might call speech studies: stuttering “cures”; elocution; orthoëpy; Major Beniowski’s “anti-absurd” or “phrenotypic” orthography (it luks lyk this), Pitman and Gregg shorthand, and other methods of supplanting the arbitrary signs of written language with a sort of “score” based on the sounds of speech. I am only human: the murder intrigued me too. Had the mystery been solved? Suppose I could solve it?—with the methods of scholarship, of course!

I closed the book on its interesting passenger and pressed it to my chest. I had the sudden feeling that someone was looking over my shoulder: not another ghost but an up-and-coming scholar in my own discipline, slavering to take from me the “lead” that was—but for how long?—mine, all mine.

Excerpted from Riddance; or, The Sybil Joines Vocational School for Ghost Speakers and Hearing-Mouth Children, copyright © 2018 by Shelley Jackson. Reprinted by permission of Black Balloon Publishing. 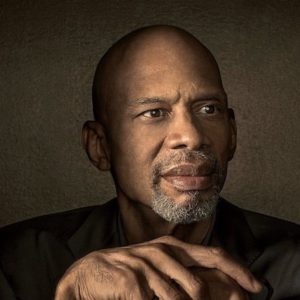