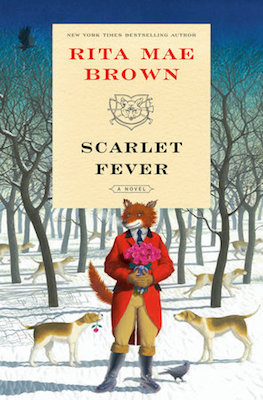 The following is an exclusive excerpt from Scarlet Fever, Rita Mae Brown. It’s February in the beautiful Blue Ridge Mountains when “Sister” Jane Arnold learns that Harry Dunbar, a member of a rival fox-hunting club, has been found with his skull cracked and bereft of the priceless ring he had carried in his pocket. Sister Jane and her dogs don’t have long to outfox the murderer, and restore the spirit of the hunting season.

The entrance to Horse Country in Warrenton, Virginia, bespoke established grace. The floor beckoned with a checker-  board black and-white pattern, a pattern beloved for centuries in Northern Europe, especially in the estates of the powerful. The wall immediately to one’s right glowed with mahogany book- shelves, the top shelf a half moon, and above that a line of boots, and whatever Marion Maggiolo, the proprietress, wished to put up there. The shelves themselves yielded treasures, be they old signs from long-ago times or more boots, nineteenth-century books bound in red Morocco with gilt edges. Sometimes a two-seater carriage sat before all this, other times, a comfortable chair covered in the store’s signature zebra print, although not a true skin, of course.

The store also reflected a quiet version of success. So if you walked in there, you felt successful.

The rear of the store housed the library full of more leather-bound books, some rare and expensive, others from the 1920s–1950s and well within reach of a modest budget. Jenny Young oversaw the library.

Wherever one looked beautiful items sang a siren song, the old silver in the north cases, the clothes along the south side of the wall or in the smaller room off and behind the northern cases, clothing designed to make people look good, perhaps too good. Scarlet then as now made men bedazzling. To say scarlet led women to their ruin might be an overstatement. If the lady had discipline perhaps she could resist. Then again, why resist?

Such ideas were not swirling in Jean Roberts’s mind, for closing time neared. She began to put items away for the night. Business had been booming since cubbing, which starts after Labor Day, and the Christmas season had proved intense and profitable, thank you, Jesus.

“Your scarlet isn’t in yet,” Jean called out to Harry, who was meandering down an aisle.

“Then why are you walking away?” she fired back. “These goods are irresistible.”

“I thought I was irresistible,” Jean replied.

He stopped and smiled. “Indeed, but an irresistible woman can get you in more trouble than silverware.”

“Both can melt your credit card. Why didn’t you call? I could have saved you the trip. Your scarlet should come in next week.”

“I really came up to see you. Take you to dinner. I have a proposition and we are old hunting buddies. I can trust you.”

Jean, hands poised over the jewelry case, blinked. “Harry, you’ve never said anything like that to me before.”

“I should have. I should have told many people how I value them but here I am telling you.”

“Thank you. I have an Ashland Basset meeting. It should be over at seven-thirty.”

“How about I meet you back here at eight? Lower parking lot.

We can switch to my car.” “Sounds good.”

He peered into the case where Jean was removing jewelry to a special drawer for safekeeping. “That is stunning!”

“Erté. Pavé diamonds and emeralds. Obviously.” “Let me see it.”

Jean pulled the ring out of the case. She was going to put it in the drawer anyway. Slid it toward him.

Harry carefully picked it up, inspecting the workmanship. “You know, Jean, there are people today who don’t know who this designer was.”

“There are people today who don’t know a lot of things and don’t care. Like history, for one.” Pointing to the ring she inclined her head. “Design is of no consequence to them.”

Bedazzled by the ring, fox’s tail over his nose, Harry shrugged. “I think it’s always been that way. Doesn’t matter the century or the country. Few people care about aesthetics in any form.”

He slipped the ring, a woman’s ring, on his pinkie then wiggled his fingers. “Perfect. Jean, let me wear this, I’ll give it back when I pick you up for dinner. But just for two hours let me commune with Erté.”

“You girls get the best stuff. You know that.” He grinned at her. “Depends on the stuff,” Jean shot back.

Harry nodded in agreement, stuck his hand in his pocket, waving to Jean with his other hand.

He picked up a dish on a counter, fox in the middle, placed it back, then disappeared downstairs.

Roni Ellis glanced up. “Harry, are you in the market for a new saddle?”

He smiled. “No. Just looking. Can’t help myself.” He then climbed back upstairs.

Six on the dot, Jean walked through the aisles, called down to Roni, “I’m on my way to my meeting. See you tomorrow.”

“Have a good one.” Roni came to the foot of the stairs. “Tell Diana Dutton hello.” She mentioned one of the members of Ashland Bassets.

“Will do.” Jean slipped on her coat, tied a necessary soft wool scarf around her neck, left by the front door, locking it behind her, for it was closing time. Harry walked out with her, kissed her on the cheek as he opened her car door for her. “Eight o’clock.”

The jewelry had been removed from the glass case, put into a shelf, the shelf Jean locked. Roni did not unlock it. No need. Jean never failed to secure valuables.

By six-twenty Roni had double-checked the main office. Everything seemed in order. She looked behind the main counter. The jewelry had been removed from the glass case, put into a shelf, the shelf Jean locked. Roni did not unlock it. No need. Jean never failed to secure valuables.

“Well, good.” Turning off the lights, Roni opened the front door and was greeted by a blast of February night air. She closed it, locked it, and sprinted to her car parked in the top lot.

The next morning, February 27, Wednesday, as the sun was rising a bit after quarter to seven, the light provided a soft glow, given the lay of Alexandria Pike. Few cars rolled on the paved road. That would pick up in a short time.

One early riser, Shirley Resnick, coffee cup in her right hand, slowly drove down Alexandria Pike toward the imposing cream- colored courthouse at the top of the hill.

She blinked. Stopped in the middle of the road. There was no traffic. She turned right into the bottom parking lot of Horse Country. Placed her coffee cup in the cup holder of her Accord. She sat for a minute, put the car in park, let the motor run, and stepped outside to the crumpled man sprawled at the bottom of the steep side stairs rising to the front door.

Kneeling, she slightly shook him. He was stiff. She recoiled, hurrying to her car, picked up her cellphone, and dialed 911.

The Best and Most Binge-Worthy Thrillers for Your Thanksgiving Weekend

The Best and Most Binge-Worthy Thrillers for Your Thanksgiving Weekend The time has finally come. A handful of gratitude, a pound of indulgence, a pinch of family, patience, bad traffic, an excess...
© LitHub
Back to top