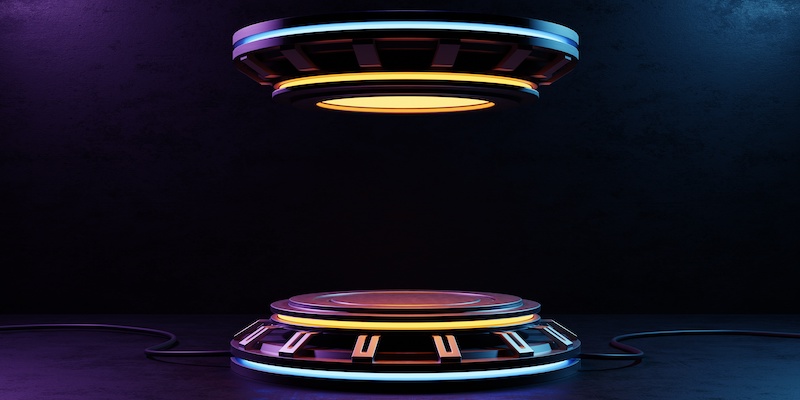 Or, a look at five great scifi novels that also happen to be pitch-black noirs.

I have lost count of the number of times I’ve heard someone say that—or something like that—when I try to explain my love of a genre chock full of alien invaders, interstellar spacecraft, and gun-toting princesses, alien or otherwise. There is something so “out there” about SF that many readers never give it a chance.

If so, you’re missing out. Science fiction is “out there” because it sets its stories in a world that isn’t necessarily ours. Sometimes in a universe that has nothing to do with the one where you’re reading this article. Daunting for the non-nerd? Sure. But think about it this way. If the whole universe is your playpen, you can write any story you want. Any story. A love story? Sure. Starcrossed lovers from warring worlds, for starters. A swashbuckling adventure? Ditto. Isn’t that Star Wars after all?

It’s anybody’s universe, remember. Bad things can happen there. Crimes. Crimes that need solving. Mysteries. If you’re a lover of crime fiction, science fiction has a lot to offer you. If you’ve never read a sci-fi novel in your life, here are five you should consider—in increasing order of nerdiness from “sci-fi curious” to “irredeemable geek.” But every last one of them is a crime novel. So, buckle up. It’s time to engage thrusters.

As we rumble upwards and the atmosphere thins around us, let’s stay “Earth adjacent” in the recognizable near future. So recognizable, in fact, that some people call this “speculative” fiction. “Speculative” is less threatening than “science,” apparently. We, however, know better.

Enter The Water Knife, by Paolo Bacigalupi. In the “wild southwest” of the United States a catastrophic shortage of water has impoverished the entire region. The Colorado river has shrunk to a trickle. The Central Arizona Project has almost no water, and the states with the most senior water rights do the best. California is the Promised Land, Las Vegas, Nevada is holding its own, and Arizona, holder of the most junior water rights, is royally screwed: “#PhoenixDowntheTubes.” It is to Phoenix that Angel Velasquez, a detective, spy, and all-around fixer, is dispatched by his employer, the Southern Nevada Water Authority. There are rumors that someone there has stumbled upon new water rights, rights that could upend the power structure of the entire region. SWNA’s Phoenix agents are either dead or compromised and Angel’s orders are to investigate who’s behind the killings and whether the water rights rumor is true. But as he stumbles deeper and deeper into a web of interlocking plans and conspiracies, Angel begins to wonder whether he’s been sent to carry out an investigation, or to disappear into the desert like the Colorado itself.

In many ways The Water Knife is a classic crime thriller. But for anyone who remembers the wildfires and water shortages along the Colorado River last summer, this is a piece of fiction that feels uncomfortably close to true.

Moving on up, the roar of our engines vanishes into the blackness (sound can’t travel in a vacuum regardless of what Hollywood tells you), and we park ourselves in Earth orbit, the setting for Chris Brookmyre’s Places in the Darkness.

Ciudad de Cielo—The City in the Sky—orbits the Earth every few hours, an outwardly glamorous first stop on the hoped-for road to deep space. But, like its earthly cousins, this orbiting city has its fair share of crime, much of it of the organized variety. Conscious of the need to project a positive image to the world below, the authorities treat Ciudad de Cielo’s rival gangs with a light touch. Until, that is, various pieces of a dismembered corpse are found floating around the place. Literally. Nikki “Fix” Freeman, a jaded member of local law enforcement, is forcibly partnered with Alice Blake, a by-the-book government type, and ordered to investigate. As they do so, the body count starts to climb, and the two women are forced toward a couple of uncomfortable truths. One: there may be more to this than gang warfare. And two: they can’t trust their own memories.

That Chris Brookmyre is known primarily as a crime writer should tell you something. This is a buddy-cop noir that just happens to be set on a space station. If buddy-cop noir is your thing, or you are a fan of Chris Brookmyre’s more earthly works, then Places in the Darkness is the place for you.

For those of you who are feeling a little more adventurous, it’s time to break from Earth orbit, pick up velocity, and head into deeper space and back in time: to the 1956 Isaac Asimov novel, The Naked Sun. A couple of centuries into the future, Earth is overpopulated and impoverished, kept down and hemmed in by the spacers of the fifty outer worlds, who have grown rich and powerful on the back of unlimited resources and robot labor. Perhaps the most extreme of these outer worlds is Solaria, whose inhabitants are so rich and so spread out that the adults (even the married ones) almost never interact in person, preferring to do both their work and their recreation remotely, by hologram. How, then, can a prominent Solarian have ended up battered to death? No Solarian could stand to be near him long enough to kill him and it is physically impossible for a robot to murder a human being. An impossible crime requires an unthinkable combination to solve it: Earther detective Elijah Baley and Spacer robot R. Daneel Olivaw.

The Naked Sun is a sequel to Asimov’s 1953 novel, The Caves of Steel, a sci-fi mystery set on Earth. Asimov apparently wrote it in refutation of John W. Campbell, the author and editor of Astounding Science Fiction, who claimed that mystery and science fiction were fundamentally incompatible. The Caves of Steel is at least as good a crime novel as The Naked Sun, but Solaria’s remote-working society on steroids will have a special resonance for those of us who have spent the last two years on Zoom.

With our home planet now a distant dot in the ’scopes, it’s time to engage the hyperdrive. A short test jump that will bring us out at … Earth. But not the one you’re familiar with. This is the Earth of Richard K. Morgan’s Altered Carbon.

Takeshi Kovacs, the brutal anti-hero of Morgan’s novel, has been dead for 250 years when he is brought back to life. Not so unusual in a world where, if you are rich enough and powerful enough, you can download your consciousness into a new purpose-grown body as many times as you like. What is unusual is that Takeshi Kovacs is an Envoy, a man so dangerous his consciousness should have been kept on ice for eternity. He has been given a new lease of life by Laurens Bancroft, who, at three hundred and sixty years of age, is one of the oldest, richest, and most powerful men in all of human-occupied space. Bancroft offers Kovacs a deal. Solve a murder that has the local police stumped and keep the body in which he finds himself. Fail or refuse and go back on ice forever. And the murder to be solved? That of Bancroft’s previous incarnation.

Kovacs is a Philip Marlow of the future. More than a match for the darkness in which he finds himself but not quite part of it. If you like your crime hard boiled, Altered Carbon should do nicely.

And now, with all the controls set to full power and our finger poised on the jump button, let’s take a moment. Because, once we press it, there’s no going back. Try as you might to deprogram yourself, you will be drenched in sci-fi geekiness for life. Ready? Here we go…

Welcome to The Murderbot Diaries, a series of stories by Martha Wells, starting with the novella All Systems Red. Murderbot, the crime-solving protagonist in what are essentially a series of corporate thrillers, isn’t even human. It’s a rogue Security Unit: a half-robot, half-organic, fully paranoid bodyguard/special forces drone that has hacked its own programming so that it can exercise free will. It doesn’t like humans, doesn’t understand humans, and definitely doesn’t want to be human. But if you’re out to harm the humans it’s contracted to protect, heaven help you—not least because you will be interrupting its non-stop streaming of soap operas. In All Systems Red, Murderbot is acting as security for a planetary survey team when things start to go wrong. It doesn’t take Murderbot very long to figure out that things aren’t going wrong by accident. Now, all it has to do is find out who and why before its human “masters” discover that they can’t actually control it. Even though murderbot isn’t human, its humanity (and arid sense of humor) will keep you turning the pages and coming back for more.

So, there it is. If you’ve made it this far, you’ve truly arrived. Hopefully, in addition to crimes witnessed and mysteries solved, you’ve had an opportunity to step out of your head and look at things from a slightly different angle, uncoupled from politics and culture. You’ll have considered the link between water and government, the malleability of memory, how it feels to be “other,” immortality, and ultimately, what it means to be human. Because that, that gift of seeing things from a fresh angle, is the true joy of science fiction.

And, of course, finding out whodunnit.

This is my stop, as they say back on Earth. It’s been a pleasure riding along with you. 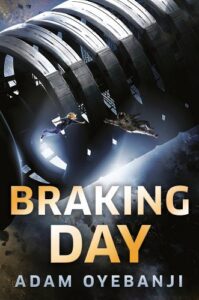 Of Scottish and Nigerian descent, Adam Oyebanji was born in Coatbridge, North Lanarkshire. He recently took the big step of moving east to Edinburgh by way of Birmingham, London, Lagos, Chicago, Pittsburgh and New York: a necessary detour, because the traffic otherwise is really, really bad. A graduate of Birmingham University and Harvard Law School, Adam works in the field of counter-terrorist financing, helping banks choke off the money supply to rogue states, narcotics empires, and human trafficking networks. His acclaimed debut novel, Braking Day, was published in 2022. A Quiet Teacher is his first mystery novel. 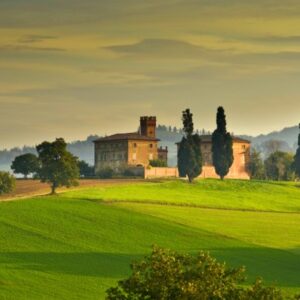 “I find nothing more relaxing than a country house murder. I was not particular about method. Poison was always good—there...
© LitHub
Back to top