Scott Reardon on the Fine Line Between Justice and Revenge

How Far is Too Far to Right a Wrong?

I wrote my first novel, The Prometheus Man, because I saw a beheading video. It was almost a decade ago, and the victim was a British truck driver in Iraq. The reversal of fortune he suffered was unbelievable somehow. Here someone had raised this man from the time he was a boy. Someone had loved him, had all these hopes for him, and yet the whole time this was the fate he was always rushing toward. He’d been made into a propaganda piece by people who were going to get away with it. In the end, even his death wasn’t his own.

It stayed in the back of my mind, I guess, for years.

My dad likes to send me articles, horrible articles, about unhinged topics, with headlines like: How wasps turn ladybugs into zombie babysitters. And then there’s always a cryptic note attached: Saw this and immediately thought of you. Sometime after I saw the video, my dad came across an article in The Economist about a stem cell experiment where researchers injected human stem cells into the brains of aging mice and slowed the mice’s cognitive decline.

Since my grandfather had a devastating case of Alzheimer’s, we read about this new stem cell technology with a lot of interest. And since we’re both demented, we had all these running jokes about it. Like, perhaps I could stand outside fertility clinics and ask the doctors if they could spare a few embryos, so my family could inject them into my father’s brain. (I’d then point to him sitting feebly in a nearby car.)

Eventually I got the idea to join the stem cells with the idea of someone’s family member being murdered abroad. My thought was: what if a member of the victim’s family came from a world away, without anyone’s help or knowledge, to hunt the people responsible down? It was chilling in some way. The will it would take to do such a thing would be incredible. And the sacrifice involved would, in all likelihood, be total. You go to a foreign country to do something like that, and you don’t expect to make it back.

And then the final piece fell into place. The person who would do such a thing would have to have nothing else in his life. It was then the story came alive for me, when I found out what was so sad about it.

The main character, Tom Reese, came to me little-by-little. He would be a test subject in a stem cell experiment, based on actual experiments, which was designed to enhance the human body. But he wouldn’t know about it. He’d have lost his parents when he was a teenager and been raised by his older brother, who he worshipped as everything he himself wasn’t. And when his older brother died mysteriously abroad, Tom would be set adrift in the world.

He would be like many young men we read about today. And like them, he would put himself on a collision course with some climax of violence. Unlike them, though, he would be a kind, decent person, someone who wanted good things but who through circumstance was knocked off the axis of his life.

The more I thought about Tom, and the more I filled him with pieces of myself, the more I fell into his pit of loneliness. You look around the world today, and if you actually thought about the isolation many people live with, you wouldn’t be able to take it for very long. Every so often I meet someone who I’ll never see again, and I get this vague sense that this person has almost no one in his life. I wanted to create someone who was the embodiment of that.

But then I realized there was a way to take it even deeper. In Tom’s case, he’d had the people he wanted and then lost them. Imagine, for a moment, a time in your life when you had to spend extended periods with people who had very little in common with you. Maybe you told them something funny or that meant a lot to you, and their reaction was… nothing much at all. Now imagine the people in your life who share your values and who you share a whole body of common references with. In a very real sense, the person who existed to the strangers is a completely different person from the one who exists to your loved ones. And the existence of the self you like is predicated on the existence of the people you like.

Now imagine you lost those people. It would be, in some way, a kind of living death. And that is the state I wanted to capture in the book, one where dead people, dead things, mean more to someone than the living.

There’s something tragic and heartbreaking about that, but it’s also powerful in some horrible way. I once read a study that extremely lonely people have a higher pain tolerance than the rest of the population. That implies that unlike a lot of other types of pain, the pain of isolation doesn’t weaken you. It hardens you.

I liked it. But as I wrote, I started to wonder: what is the endgame of all this? The real endgame. Not what’s sexiest in terms of plot, but what would be the “one true thing” that emerges from all this. Here this young man is attempting on his own to find some pretty dangerous people based on scant, sometimes circumstantial, evidence. Bad things are going to happen. Actual bad things, not just some bureaucrat none of us care about getting offed on page 210.

Look at anything—wars, medical progress, technological change—and you see that no matter how worthwhile the cause is, innocent people get hurt. And what occurs in the book is two things: Tom ruins any chance he was ever going to get of having a normal life and he gets an innocent person killed.

I realized that in pursuing something noble, Tom is also pursuing something that is a denial of the life he’s been given. My dad used to like to tell us when we were angry over some perceived injustice, “You can get ahead or you can get even.” There is within Tom—and within all of us, I think—a battle between wanting to get ahead and wanting to get even. And justice is, in a real sense, getting even. It is the moral cancellation of an immoral act. And in order to accomplish that, justice forces you to look backward—into the past.

There’s a cost to this. In 2002, nine miners in Pennsylvania were trapped underground in a flooding mine for 77 hours. A year later, when New York Times reporter Jeff Godell followed up on them for a story he published in 2003 as “Who’s a Hero Now?,” a pattern emerged. Of the miners profiled, the ones who’d stopping working in order to focus on suing the mining company were struggling. They were on medication, seeing therapists. They seemed to be the most haunted—and the most defined—by their ordeal. But the two miners who’d returned to work, one of them for the very same mining company, were not only relatively symptom-free, they seemed to have reclaimed their old lives. Why?

Justice forces you into the past. In this sense, justice is a dead virtue. It doesn’t create anything. It can remedy wrongs, but it can never power a life. And in Tom’s case, he finds he can’t get justice for his brother and still get a life for himself. Ultimately he has to decide how far to push his agenda, not based just on its merit but on its cost, both to himself and others.

Scott Reardon is a graduate of Georgetown University and Northwestern Law. He runs an investment management firm in Los Angeles. THE PROMETHEUS MAN is his first novel.

Whatever the Genre, Elizabeth Hand is Brilliant 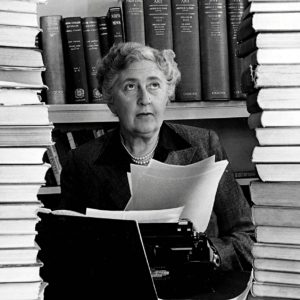 Undisputed Queen of Crime Agatha Christie died on this day in 1976. Crime fiction is a genre that has traditionally been...
© LitHub
Back to top