The game new mystery film turns out to be a riff on Agatha Christie's play The Mousetrap, among other delightful surprises

Agatha Christie’s The Mousetrap is the longest-running West End play in history. It opened in 1952 and has played continuously in its original production in its original theater since then (except for a mandatory fourteen-month break when all the West End theaters closed due to COVID). It has been seen by more than ten million people. But the characters of the new film See How They Run do not know this yet. The film, directed by Tom George and written by Mark Chappell, is set on the night of the one-hundredth performance of The Mousetrap, in 1953.

Richard Attenborough (Harris Dickinson) is the lead, playing the detective. His wife, the actress Sheila Sim (Pearl Chanda), stars in it as well, as one of the potential suspects. Hollywood types are doubling down, eager to produce an adaptation, which contractually is forbidden until six months after the play has closed. And then, when all these various characters are attending a party inside the theater to celebrate the play’s new performance record, one of them winds up murdered—his body dragged onto the stage and left there to be found. A detective will be called. And an investigation will commence. And a murder mystery inside a murder mystery will begin.

It’s not difficult to pastiche something, especially a well-known genre with lots of hallmarks, very especially the ur-text of that well-known, well-hallmarked genre. But See How They Run doesn’t simply hoist The Mousetrap as a proscenium for its own mystery—it stages a mystery that is very much about the nature of The Mousetrap, itself. That play, originally called Three Blind Mice (for the tune that the killer uses to taunt his victims), is about a mysterious psychopath who terrorizes a group of people gathered in a country manor house.

The film plays with The Mousetrap‘s plot, but it is more interested in digging into its production history. It is clearly fascinated by its legacy: that a play easily ruined by word-of-mouth spoilers would come to have a grip on so many, for so long. Agatha Christie herself only gave the run eight months. It deftly and wittily re-imagines the politics of adapting and transforming the play into a Hollywood movie, just as it questions the ethics of Christie’s original gambit: adapting and transforming a ghastly true crime story into a lighthearted play (which modern audiences might not know about).

Its players are mostly not real people (save for the Attenboroughs), but embodiments of the forces that put commercial, formal, and intellectual pressure on artistic projects, and might have done so on The Mousetrap. Petula Spencer (Ruth Wilson) is the stern impresario mounting the show, Mervyn Cocker-Norris (David Oyelowo) is the pretentious writer in charge of the screenplay, Leo Kopernick (Adrien Brody) is the louche Hollywood director hoping to turn it into an action-packed blockbuster movie, John Wolfe (Reece Shearsmith) is a producer eager for the play’s theatrical run to come to an end so he can finally make some money off it. Agatha Christie (Shirley Henderson) mostly stays at home, too distracted by other projects to be invested in her bloody creation.

In real life, Christie was famously less interested in “murder” than the “English murder”—that is, situations that, when simmered the right way, caused people to abandon ingrained forces like decorum, reason, and compassion. Naturally, the detectives in The Mousetrap and See How They Run are tasked with the same question: to figure out the identity and motive of the murderer. But the film allows this to be more thematically fruitful than it might seem. The detectives solving the murder at The Mousetrap are D.I. Stoppard (Sam Rockwell) and W.C. Stalker (Saoirse Ronan), and they have opposite approaches to this sort of crime. They are the only two police officers at Scotland Yard available, since everyone else is concerned with the Rillington Place serial killer (the film is a trivia party for theater and movie nerds, and this is one such piece of confetti: Attenborough would go on to play the Rillington Place serial killer John Christie in the film adaptation of that true crime, 10 Rillington Place).

Stoppard (named, presumably, for the playwright Tom Stoppard, who pastiched The Mousetrap himself in his Real Inspector Hound series) approaches the mystery like a real-life crime. The early-career Stalker, eager and fastidious, approaches it like she is reading a mystery novel, or, well, watching a play. She studiously observes, develops theories, makes assumptions, while the depressed and rumpled Stoppard plods from one clue to the next. In a way, they are racing with one another for the answer.

The film is about the joyful experience of being a spectator, trying to solve the crime alongside the main sleuth

The Mousetrap famously ends with the detective, Trotter, addressing the audience, informing them that they are “accomplices” to the production; they must not breathe a word about the identity of the murderer so they don’t spoil the show for anyone else. The film dwells on this moment of the script a few times, making clear that its central thesis is about the relationship between whodunnits and their viewers, rather than between itself and its source text.

Indeed, the zealous and pop-culture-savvy Stalker is clearly framed as “the audience” (a sort of armchair… or auditorium detective, if you will) while Stoppard is the traditional investigator; the film is about the joyful experience of being a spectator, trying to solve the crime alongside the main sleuth. See How They Run isn’t simply an enthusiastic pageant touting the pleasures of a good whodunnit or paying tribute to Agatha Christie or even trying on its cliches for itself in the mirror. The film, which is loaded with overt parallelism and mimesis and meta-theatricality, knowing glances, breaks in the fourth wall, countless jokes, and ample slapstick (the latter thanks to the light-on-his-feet Rockwell), does have fun in the whodunnit costume shop, so to speak. But ultimately it is a very organized affair, condensing at least seventy years worth of history and adoration into a very smart reading about what whodunnits mean to us, and also what they cost us.

See How They Run is about adaptation, ownership, and originality. Who owns a mystery? Who has the rights to a mystery? Who does it belong to, in a more personal sense? For all its archive-digging and philosophizing, the movie is a tight 98 minutes, and it is so economical and efficient in its narrative exertions that you do not need to have seen The Mousetrap to appreciate it (though it will be more enjoyable if you have). And you don’t have to know anything about whodunnits or have wondered anything about them before, either. If you have, you’re in good company, and if you haven’t, you’ll be glad you’re getting your introduction from such a good company.

The film is visually vibrant and neatly-directed, with its visuals teetering into kitschiness only when the moment is right. But the best part of the film is the acting. The ensemble cast brings the kind of electric, slightly over-dramatic verve that you might hope to observe in a sold-out play. But Ronan’s performance as the sincere, avid, wholehearted Constable Stalker provides the film’s most memorable touch. Her excitement about her situation is designed to augment our own, even more than the enticing pulls of the central murder mystery itself. 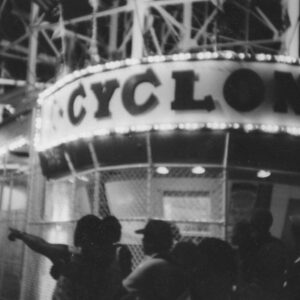 –Featured photograph by Maggie Wrigley My long love affair with Brooklyn began years back when I, a Harlem born and breed...
© LitHub
Back to top