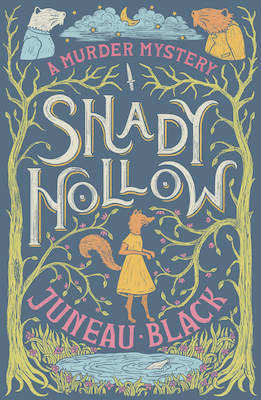 The following is an exclusive excerpt and cover reveal from Shady Hollow, by Juneau Black. In the following passage, set in a world filled with anthropomorphic animals, a newspaper reporter learns of a suspicious death in her bucolic village. Scroll down for an exclusive peek at the cover designs for the first three books in the series. Shady Hollow will be published in January of 2022.

One lovely dawn in late August, the sun was cresting the tops of the distant hills to pour its golden light over the forest. Gladys Honeysuckle, always an early riser, was already on the wing, more than halfway into her daily journey toward town. She was a hummingbird (as her name implied), and her bright green wings were always in motion, going about a hundred miles an hour. Her tongue seemed no different. Gladys had something of a reputation as the town gossip. Conveniently, she was well employed by the Shady Hollow Herald, the town’s sole newspaper, where she wrote a regular column about town events and goings-on. Not a prestigious post, perhaps, but one suited to her gifts. BW Stone, the editor of the Herald, had kindly provided Gladys with a small desk in the newsroom, making her the first gossip columnist to rate as a regular reporter. This distinction made Gladys puff up her chest with pride and ensured her daily attendance at the paper. BW Stone liked all his reporters to be on-site, where he could keep his sharp skunk eyes on them.

Gladys was a widow, and her chicks were grown and gone. A true empty nester, she looked forward to going to work every day. Further, she was determined to prove her worth to the paper, thus assuring that her job would exist forever.

On this particular morning, she left her small straw-nest cottage, located high in a beech tree outside town, and flew toward the center of the village and the newspaper office. Peering down the quiet paths partly hidden beneath the leaves, she saw that almost no one else was about yet. She spied only Joe, ambling along the north track, his massive hooves surprisingly quiet on the road. The moose was not by nature an early riser—at least not compared to the birdfolk. But Joe wouldn’t dream of allowing a customer to wait outside his coffee shop. He was up well before dawn to open the café, with fresh joe ready to serve. He seemed to be at work at all hours, with nary a complaint, despite being alone in the world but for his son, Joe Junior. Servers and cooks came and went . . . Joe was a constant.

Gladys paid Joe little mind while she winged her way over the forest. She had her own issues to worry about, thankyouverymuch. While she darted over the tallest branches, her buzzing brain was fully occupied with thoughts of her youngest, Heather, who had recently moved in with her new husband. They were both grown, true, but it’s a mother’s prerogative to worry about her offspring, and Gladys was no exception. Of course her chick claimed to be happy. They lived off in their own world, a day’s flight away. But who really knew?

Not Gladys, who uncharacteristically was feeling quite left out of the loop and was rather anxious as a result. This was a state she never wanted to be in. She trembled at the very notion of unheard gossip.

Lost in thought, Gladys circled twice over the millpond, gaining height on an updraft. She glanced down at the water, yet to be touched by sunlight. Coasting on the wind, she spied something out of the ordinary, a shape that didn’t quite fit. She swooped back around for another look. What could it be? A sack of some type? A bit of lost wood floating in the pond? She dipped even lower, her natural curiosity bubbling forth.

The object broke the smooth surface of the water, shapeless and perplexing in the pale dawn light. It was still and quiet, but it was no clump of weeds or loose log that had drifted to the middle of the pond at the behest of the gentle current.

The hummingbird’s heart went cold. This shape was getting awfully . . . familiar. Her wings beating furiously, Gladys flew even lower, hovering directly above the body of a toad, belly up. And not just any toad. Otto Sumpf.

Otto was a longtime resident of the Shady Hollow pond. He had a reputation for being grumpy and surly, though some residents insisted that underneath the facade, he was quite kind. He would never thank you to point it out, though.

Now, it appeared, he was also quite dead. His pale legs were stiff; if not for the position of the body and its terrible stillness, he might have been midleap.

Stunned, Gladys registered these incidental facts while staring at the poor toad from a vantage point only birds enjoy. From the shore, Gladys’s actions would be unclear, should anyone be watching. She didn’t consider that, however, because the horrible truth of Otto’s demise was still coalescing in her frantic mind.

A small voice in her head reminded her that the police should be informed first and foremost. That’s right. She nodded importantly to herself. The authorities had to be notified. She would call the police after she got to her office and calmed down a little. Though she was not terribly fond of Otto, he was—had been—a neighbor, and it was most off-putting to find one’s neighbor dead on one’s way to work.

Somehow, the shocked and sickened Gladys finished her flight, landing at the newspaper office. She hurried inside, hoping no one else had made it in just yet. But as soon as she entered the front door of the building, Gladys smelled the harsh notes of newsroom coffee. She knew exactly who it had to be—the fox. 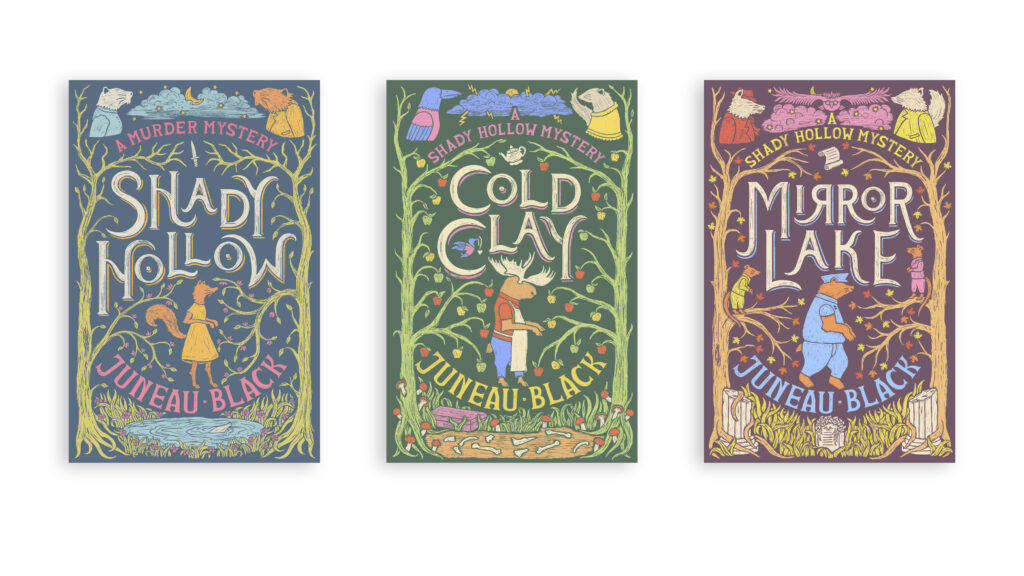 Vera Vixen was one of the Herald’s news reporters. She was also one of the few staff members who seemed to actually live in the newspaper office, and she had long followed the journalistic tradition of drinking her java strong, black, and scalding hot. It was brewed for effect, not for enjoyment. The quick red fox seemed to thrive on the stuff. Almost everyone else just got their coffee from Joe. To be sure, Vera often did as well, but her personality demanded a constant supply.

Vera was always hoping for a big scoop, and today was no exception. Her pointed ears twitched when she heard Gladys buzz in, and she braced herself for a chattering account of the latest gossip. Instead, Gladys hurried to her desk without saying a word, which was so unusual that the fox got up and trotted over to the little hummingbird.

Gladys nodded curtly and kept her eyes averted. Vera was not a top investigative reporter for nothing, and she noticed the smaller creature’s gulping breaths.

“What’s wrong, Gladys?” she asked. “You look upset. Did something happen?”

Gladys burst into tears. Concealing anything was against her nature. With only that small prompt, she completely forgot her resolve and spilled everything.

Listening to the hysterical hummingbird, Vera’s ruddy ears perked up and her black nose twitched. A death? In Shady Hollow? Vera was naturally curious. This made her an excellent reporter. Though some townsfolk called her nosy, Vera paid them no mind. A good reporter, she believed, had to take an interest in things and ask the questions others were afraid to ask.

After wheedling the main facts out of Gladys, Vera settled the still-weeping hummingbird in her office with a glass of the bird’s favorite sugar water and a stack of clean tissues. Vera’s mind was working furiously. If Gladys had just discovered the body, maybe no one else had seen it. If she hurried, Vera could get to the scene and record all the details. The death of Otto would be big news, if only because everyone in town had been on the receiving end of the toad’s rants at one time or another.

Unlike the hummingbird, Vera did not feel the slightest compunction about not going to the police immediately. The police chief of Shady Hollow was Theodore Meade, a slow-moving and slow-thinking black bear. He had no problem with things like shoplifting and noise ordinances, but that was about his limit. Vera would be happy to report the passing of Otto Sumpf to the authorities, but not before she had a look at the scene herself. She strapped her camera over her shoulder, ready to go.

On her way out, she peeked in at Gladys once more. The little bird was still gasping and wiping her eyes. As soon as Gladys regained her composure, she would be yammering to everyone who walked by. Vera had only a small window of time before the whole town showed up at the pond to view poor Otto’s remains. She headed out of the Herald office toward the pond.

Fortunately, it was still very early, and few creatures were about, other than some folks headed for the sawmill, which loomed over the far side of the pond. Its mill wheel turned steadily, casting ever-widening ripples upon the otherwise glass-like water.

Vera strode on purposefully, her camera bouncing on its strap on her shoulder. She peered out over the edge of the pond. Purple loosestrife grew thickly on the edge of the water, with little green algae blooming just beyond. It was deceptively peaceful. Only Otto Sumpf was there. Floating in the water. Faceup. Just as Gladys had described.

From SHADY HOLLOW by Juneau Black, to be published by Vintage Crime/Black Lizard on January 25, 2022. Copyright © 2022 by Jocelyn Koehler and Sharon Nagel. 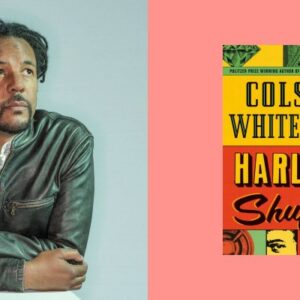 Colson Whitehead on Why He Wrote a Heist Novel to Tell the Story of New York There’s the New York we see. The streets and neighborhoods, townhouses and office buildings, stoops and bodegas. That’s...
© LitHub
Back to top