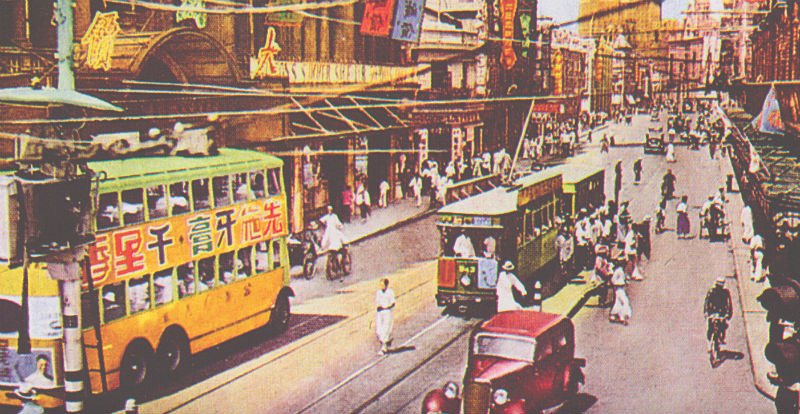 Shanghai in the 1930s: A Dope Smuggler's Paradise

How Jewish Gangsters Built a Shanghai to Brooklyn Heroin Pipeline

The money had gone out of booze real quick when Prohibition was repealed in America in 1933. Technically the ban on drinking had applied to Americans in Shanghai too—the downside of extra-territoriality. But nobody, including the U.S. Court for China and the U.S. Marshal’s office in the city, had been dumb enough to try to enforce the Volstead Act in the Settlement, and Americans in Shanghai had just gone right on drinking and whooping it up throughout. With the city’s minuscule import duties, customs officials notoriously susceptible to bribery and looking the other way at the dockside, and no excise or license fees to pay on booze, American rum-runners brought in case after case of whisky from Ireland and Scotland, brandy and cognac from France, and shipped it all straight back out again as contraband to the States—the long but very profitable way round. Carlos Garcia had made a small fortune shipping his own distilled Mexican tequila into Shanghai and back out again to America’s West Coast in crates marked “Chinese Pig Bristles.” Higher-end California speaks and blind pigs relied heavily on shipments of decent liquor from Shanghai. Yes, Prohibition had surely been good to the Settlement while it lasted. Still, everyone knows dope can make liquor look like small beer.

Dope is the future, but the killjoys in Washington, D.C., are intent on cracking down on heroin, cocaine, and morphine. Stealth and multiple trafficking routes are urgently required. New York mob boss Little Louis ‘Lepke’ Buchalter dispatches his top procurement mensch, Jacob ‘Yasha’ Katzenberg, east. Yasha hits the ’Hai in time for Chinese New Year 1935—the year of the pig—looking to buy opium and Cadillac pills for shipment to Lepke’s processing plant up on Brooklyn’s Seymour Avenue. Big-Eared Du and his Green Gang have a monopoly on the dope. To facilitate an introduction to him, Yasha needs a Shanghai connection.

Dope is the future, but the killjoys in Washington, D.C., are intent on cracking down on heroin, cocaine, and morphine. Stealth and multiple trafficking routes are urgently required.

So Yasha looks for his own kind, people he can trust. You can’t just stroll up to Du’s Frenchtown mansion-cum-fortress and get a meeting; you need local go-betweens. Yasha finds what he is looking for in Albert Rosenbaum, sipping schnapps at the Red Rose Cabaret. Rosenbaum had known Yasha somehow or other, some connection back in the old country, Romania, though people said Rosenbaum was Bulgarian—nobody was sure either what he was or what the difference was. Rosenbaum is tight with Sammy and Al Wiengarten, old-time Shanghai bad hats and owners of the Red Rose.

Like the Venus close by, the Red Rose is where the city’s Jewish demimonde and underworld gather, kvetching about business, tightwad punters, meshuggeneh showgirls and schlemiel associates. Joe Farren still hangs out at the Red Rose after hours occasionally, even though he’s now the ‘dapper Ziegfeld’ of the North-China Daily News society column, slurping goulash at the end of the bar with nightclub legends Sol Greenberg of the Casanova and Monte Berg, who runs the longtime popular Little Club. Joe likes Sammy Wiengarten; he’s an old-timer, a mensch, an all-round nice guy if you don’t cross him. Sammy should have retired long ago, but he’d just shrug, look up at the ceiling, and ask where he was supposed to retire to: fucking Jew-hating Romania? Sammy and Joe introduce Yasha to Rosenbaum, who’s a moneyman and dealmaker with a finger in plenty of pies across town. All business, all deals; Jews without any romanticism or nostalgia for any old country, any shit-hole shtetl or slum tenement. They’re all looking to make money, get rich, move up.

When the Paramount and the Canidrome close for the night, the Red Rose carries on till dawn with the late, late crowd, cars lined up all down the street, local Chinese kids paid to guard each one from car thieves. The Red Rose is nothing special; it’s drafty and threadbare, with a White Russian manageress always dressed in black, still in mourning for her long-dead husband killed fighting the Bolsheviks. Close-to-past-it hookers grift the crowd while slumming swells jig to gypsy jazz from a White Russian balalaika band plinking away, done up like Kalderash clan gitanes. No Joe Farren–choreographed hoofers here; instead it’s all Russians singing late-night torch songs mourning lost homelands over lukewarm borscht. Stateless Russians cry into their vodka alongside second-rate Ukranian gypsy boulevardiers, Shanghailanders swilling Japanese rotgut whisky. But it paid—vunbottlvine two dollars Mex to a known face, five dollars to a drunk sailor, ten bucks to a sojourning tourist, and never more than a buck twenty to a down-at-heel fellow Russian. Sammy is cheap with the acts—the night’s big joke comes when a particularly croak-throated crooner starts their favourite Russian dirge, ‘Dark Eyes’. The patrons empty their pockets of change, and the clatter of coppers generally drowns out the rotten sound, while the singer scoops up the coins and disappears offstage. 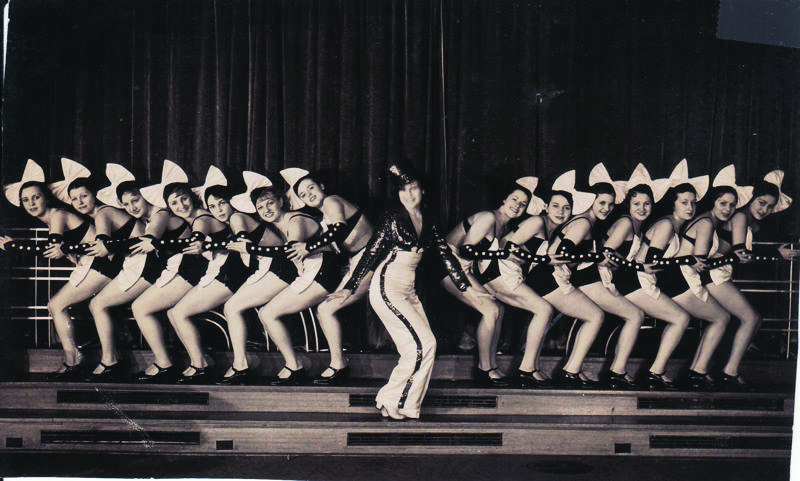 Early morning it’s Farren, Rosenbaum, and the Wiengarten brothers backstage, all Yiddish bonhomie, old-time Shanghai stories from the twenties, checking out the new Russian and Jewish girls down from Harbin. The old gag: those girls dressed on credit and disrobed for cash. Joe checks several of his Follies and Peaches doing a little off-the-books business. They smile back; they know Joe’s got the roving eye and the keys to half a dozen apartments he can take them to. Sammy Wiengarten and Al Rosenbaum lay it out: Du can supply the dope, but Yasha wants contacts to run his routes, and he only trusts his own. There’s no crossing Yasha: his backers are Lepke Buchalter and Meyer Lansky of New York’s Lower East Side mob, and both have reputations that cross the Pacific.

Buying off the Shanghai ports is no problem—Chinese customs officers are soon queuing up at the Buick showrooms with hundred-dollar bills shipped straight from Brooklyn.

Buying off the Shanghai ports is no problem—Chinese customs officers are soon queuing up at the Buick showrooms with hundred-dollar bills shipped straight from Brooklyn. But Yasha drops major coin buying up U.S. customs to establish a direct route, and he urgently needs plenty of mules. Then Yasha and Lepke hear the U.S. Treasury is pushing the SMP to watch sailings from Shanghai to the States. Sammy thinks back to his pimping days and re- members how ladies travelled hassle-free. Go counterintuitive: zig when the Treasury boys expect you to zag. Girls board at Shanghai and go to Marseilles, then either go straight to New York or overland to somewhere like La Rochelle or Hamburg, and then on to the East Coast. No American citizens, foreign passports only. Send some alone and some with “husbands” as cover. A few could go west via Manila or Yokohama and cross to mob-friendly L.A., maybe sail up to British Columbia and Vancouver, to be met dockside by someone with a train ticket to the East Coast. All it needs is girls, girls, girls. And all the boys know a mensch who can be trusted, a guy who knows girls, plenty of foreign girls—ones who could be encouraged to move on and have a stake waiting for them in America.

Nobody ever talks about who brokered the deal, but Joe Farren, choreographer, exhibition dancer, hirer of more young women for the purposes of dance-hall entertainment in Shanghai than anyone else, puts out feelers to take out a lease on a big nightclub somewhere on the western edge of the Settlement and Frenchtown, out where Al Israel’s got the Del Monte coining it, out where the law gets a little sketchier. He’s planning to staff it up, put a floor show together, poach the best chefs in town and let it be known there might a casino on the top floors. He says he can do it with no debt. Albert Rosenbaum sets him up with a front company to secure the licenses and keep the Municipal Council happy. Serious gelt is spent; good luck to you if you want to see the accounts. Guess where the money came from? You’ll never prove it; nobody will ever talk. But Joe Farren worked at the Canidrome: Carlos Garcia– owned, fronted by the smooth French banker Bouvier with Big-Eared Du as a silent partner; connect Du to the girls on the boats via Yasha, with the Red Rose as the meeting place for New York– trusted Albert Rosenbaum handling the money, and Sammy Wiengarten serving the drinks.

Joe Farren puts out casting calls all over town for any girl with a slim ankle and a wide smile who ever wanted to dance in a revue. A few get hired; plenty of others get offered other options that involve a boat ticket and a new opportunity. Albert Rosenbaum hands them passports, letters of transit, some cash for a new start, a package of dope for their false-bottomed suitcase, and the name of a man who’ll meet them at the Chelsea Piers in New York.

The shipments start in December 1935. All is copacetic; everyone who is anyone is involved. The only catch is there’s so much dope there just aren’t enough girls willing to ship out. New York is exerting pressure, demanding more shipments. Rosenbaum is stumped, but Joe tells him he’s got an idea. Remember Jack Riley and those slot machines? The Navy transports? Rosenbaum gets it: rotating marines and nurses head back stateside constantly with packs that’ll hold a stash and no serious customs checks on the military. But Rosenbaum’s no dummy, and he’s not so keen on Riley; he tells Joe to make sure the independently minded Slots King knows exactly whom he’s working for in New York, and understands their reputation.

Joe fixes it with Jack, who assures him there are any number of leathernecks, sailor boys, and army nurses more than happy to make a little extra on the trip back. He’ll work his Fourth Marines contacts. Jack whistles when he hears who he’s working for and shows respect, but thinks, fucking New Yorkers; Tulsa’s tougher. It’s on, but Joe reminds him that there are no side deals; you cannot fuck with these mensches. Joe finds the showgirls who want passage home; Jack works the Fourth Marines Club for rotating leathernecks. Yasha’s men wait dockside in Manhattan and along the West Coast, from Seattle to L.A. 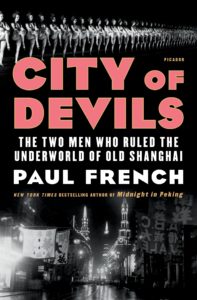 From City of Devils: The Two Men Who Ruled the Underworld of Old Shanghai, by Paul French. Copyright © 2018. Reprinted with permission of Picador. 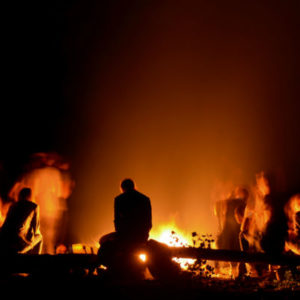 I don’t believe in ghosts, yet I’m haunted all the same. Not in the supernatural sense. This haunting is mental. A fixation,...
© LitHub
Back to top