Sharon Bolton on Writing About the "Dark Place"

"I May Be a Mash-Up of Charlotte Bronte and Stephen King!"

UK-based author Sharon Bolton has been manipulating chills up and down readers’ spines since 2008, when she published her ultra-creepy crime-fiction debut, Sacrifice. At the time, she wrote under the gender-neutral “S.J. Bolton” per publishing industry advice; six years later, with her sixth novel, Lost, she switched to her full name. But whatever name she publishes under, Bolton remains a consistently welcome presence on the psychological thriller scene. Whether she’s terrifying us with blood-draining serial killers, sinister serpents, lost children, or incarcerated murderers insisting on their innocence, Bolton always delivers the goods: seriously sly and twisted plotlines; comprehensively wrought characters; robustly researched settings and contexts; and, of course, nefarious deeds and events that delve deep into the heart of ordinary people, exposing them as they’re driven to their darkest moments.

“I always felt that I had a heritage of dark stories, of grim goings-on,” says Bolton, who hails originally from Lancashire. “I’m from the north of England, and a writer whom I very much admire, Jeanette Winterson, describes it well: ‘The North is the dark place.’ And that sentence is so powerful to me: it absolutely is a place of dark legends. We both grew up very close to the place where the Pendle witch trials took place 400 years ago: 12 people, mainly women, were accused of murder by witchcraft; they were tried and hanged. Shortly before I was born, the first of the Moors murders took place. You’ll have heard of Ian Brady and Myra Hindley? They were two notorious British serial killers who abducted and murdered children round about the time I was a very young child. Those murders had an impact on Lancashire and the area around Manchester that to this day, 50 years later, has not really gone away. If you mention those two in my hometown, the reaction will be almost visceral. It is almost as though the community feels partly to blame for producing those two killers and for allowing their children to fall victim to them. Then, at the time that I was a young woman, not far away—just across the Pennines—we had the Yorkshire Ripper who was stalking women and murdering them very brutally. So it really did feel to me, as I was growing up, that the north was a very dark place to come from.”

Bolton’s clearly incorporated some of those pitch-black impressions into her novels at a bone-deep level and in the landscape. From Sacrifice, about an obstetrician who discovers a hidden grave, to her newly published tenth novel Dead Woman Walking, a Bolton book often features beautiful, isolated locales thoroughly exposed to the elements—think the Falklands, Shetland, the British coastline and sparsely inhabited villages tucked deep in a foreboding countryside. Dead Woman Walking, for example, opens with literature’s scariest balloon ride ever (and perhaps the goriest one, as well): high over the Northumberland National Park, in England’s least-populated county, a group of revelers are enjoying the early morning air and bird’s-eye-views when they happen to witness a murder. Then, Bolton ratchets the terror-level up about a bajillion notches: the murderer looks up and notices them.

“I’ve always been intrigued by Northumberland,” Bolton explains. “It’s not far from where I grew up, and its history and landscape have always intrigued me. When I came up with the idea of a book about a woman who has to go on the run, who has to hide from everyone, I knew it had to be in the most remote part of Britain; Northumberland is the wild part of England these days. But the idea for the story came to me in Africa.

“We were on safari a couple of years ago and had the chance to do a hot-air balloon flight over the Serengeti. Up in the air, I was quite busy facing a few demons of my own—because balloons have always quietly terrified me—but we were also having this great experience. And what struck me most was how silent a balloon is when the burners aren’t firing. So we were floating over families of warthogs 30 feet below us, and they had no idea we were there. And I just had this idea of a dreadful event taking place on the ground, people in a hot-air balloon seeing a murder being committed and the murderer doesn’t know they’re there until it’s too late, till the deed is done, and they’ve all seen him. What on earth would the passengers do? They can’t do anything—they’re up in the sky, floating about. And, of course, in my scenario the murderer has a gun, and suddenly there’s the big drama of what on earth do these people do, how can they safely land this balloon?”

As with all her books, Dead Woman Walking holds a multitude of twists—in a Bolton book, one might even stun you in the very last sentence—a series of surprises that Bolton teases out across an arc of foot and car chases, police-investigation work and the murderer’s criminal activities. Bolton always fine-tunes her characters with revelatory details—this time I fell for a matriarch who carefully tends to rare black roses and appears to have a heart that’s equally shady—but she outdoes herself here with an entire group, a superfluity of nuns.

Partly a tale of two sisters, Jessica, a police officer, and Isabel, a nun, Bolton’s thriller thrums with enjoyable peeks into the visits that Jessica makes to the nunnery, spending time with Isabel. The nuns, you see, are keen television-watchers, especially when it comes to the priest-focused sitcom Father Ted, the post-mortem-focused drama Silent Witness and The Big Bang Theory (“’[One] of our sisters used to teach physics and the rest of us enjoy watching her roar with laughter at the science jokes.’”) The nuns are fascinated by Jessica’s investigative work and have no qualms about offering their opinions. They also play shepherdesses to a muster of peacocks, including the wittily-monikered Pea-soup, Pea-nut, Pea-brain and Pea-coat.

“I love the nuns!” exclaims Bolton. “One of the joys of writing fiction is that sometimes the story really does run away with the author. I never planned that the nuns would play a major role in Dead Woman Walking—I planned just the odd reference to Isabel’s background in the convent—but the minute I brought them in they would not go, and they just demanded more and more of the book’s time. They became more and more colorful, and I discovered that you cannot write about a group of nuns without making them funny. So they brought the humor into the book and the light-hearted moments and the warmth which I think was needed to balance all the dark stuff. Yes,” she adds, after a tiny pause. “We needed the nuns.”

Bolton initially honed her writing skills as a copywriter in the insurance and financial services industry. “When I started working on Sacrifice, I had not written fiction,” she says. “But I had been writing for about 15 years: my background is in public relations and marketing. The discipline of producing words, of making words count, were second nature to me by the time I sat down to write fiction. Marrying those skills with a longstanding love of stories, those were the ingredients that I needed to produce the books that I write.” She found herself writing fiction full-time as a new mother: “My son was a baby-in-arms when I started writing Sacrifice, and he had just started primary school when I got a publishing contract. It took a few years to write that book, but when I sent sample chapters to agents, it was picked up fairly quickly and that was it. I didn’t have to go back to my other work.”

Instead, she’s spent the past decade exploring the seamier areas of the human psyche, drawing part of her inspiration from an unusual duo. “People always laugh when I tell them this,” Bolton says, “but my two biggest influences have always been Stephen King and Charlotte Brontë. I aim to be a mashup of the two.” We all have a dark side, Bolton adds firmly—she just chooses to work her demons out on the page. “I think there is an innate fascination in all of us for the scary, the frightening. It’s entirely natural and I think a certain amount of exploring of it is very healthy. So yes, there is that dark side in me as there is in all of us. But I tell you what: writing the sort of books that I do has helped me enormously, has made me a much happier, grounded person. I explore the things that frighten me the most, and I come to terms with them through my stories.”

Bolton is currently working on two projects, one of which is the eagerly awaited next adventure of her recurring London detective Lacey Flint. (“We’ve had a spate of terrorist attacks here in the UK and it’s been grim, it’s shaken us. But out of grim events come stories and ideas of stories, so it’s possible that I might do a Lacey Flint story around that.”) The other is a trilogy about a police officer that will return Bolton to her childhood home, a story inspired by those Lancashire witches, though the timeframe is firmly set in the last half of the 20th century. “I’m interested in the whole business of the pack mentality,” says Bolton. “I’m fascinated by how people, when they act as a pack, can do things that they would never dream of doing individually. I’m intrigued by what is it that makes some women stand out and makes them vulnerable to this accusation of being a witch. You can see parallels all over the world: Hillary Clinton is treated as a witch, and it happens with our British female politicians—they are criticized and bullied in a way that male politicians never are. It happens with women in the media, women in television… Women, it seems, cannot step out of line, cannot be someone other than what society expects us to be. And I’m not just pointing a finger at the patriarchy, because women do this to other women as well. Women are as much to blame as men when it comes to witch hunts.”

The hunt element in Dead Woman Walking is of a different sort, but no less overwhelming in its intensity. And that depth of intensity is another mark of a Bolton book: she doesn’t shy away from exploring the most terrifying aspects of a relationship, whether it’s asking the question, “How far would you go for someone you love?” or exposing the nerve-wracking sensation of realizing that the danger you perceive is even closer than you imagined. “I think it’s probably what we fear the most,” says Bolton. “The sense that the danger is outside our home, that we can unite with our family and close friends against it—there is a comforting feeling in that: if we are with our loved ones, then we are strong, we can face whatever life throws at us. But if the real enemy is in the house, if the real enemy is the person we trust more than anything—our parent, the man we share a bed with—then that is the scariest thing. Because if you can’t trust the people you love, then that throws everything into question, doesn’t it?” 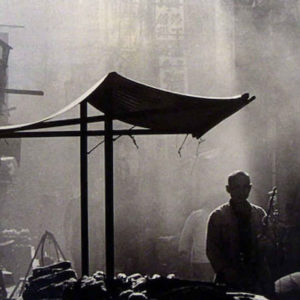 Hong Kong—the “Fragrant Harbor” or the “Barren Rock”? The Cantonese named it the former; the early British colonialists...
© LitHub
Back to top