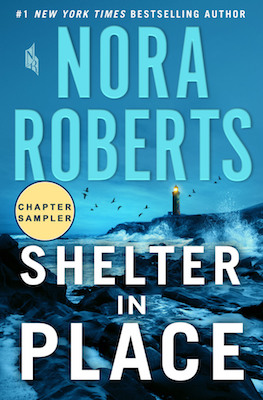 A mall cop gets a chance to be a hero when a shopping mall comes under attack in this exclusive excerpt from Nora Roberts’ new thriller, Shelter in Place. Nora Roberts is the internationally bestselling author of over 200 works of romance, and has written several mysteries under the pseudonym J.D. Robb.

At seven-twenty-five on July 22, Officer Essie McVee finished the on-site report on a fender bender in the parking lot of the DownEast Mall.

No injuries, minimal damage, but the driver of the Lexus got pretty aggressive with the trio of college girls in the Mustang convertible.

Though the Mustang was clearly at fault—the weeping twenty-year-old driver admitted it—by backing out of the space without checking, the hotshot and his mortified date in the Lexus had—also clearly—had more than a few drinks.

She calmed the girls, took statements and information, wrote the ticket. Lexus didn’t take kindly to the DUI—or to the cab Barry ordered—but Barry handled it in his “Aw, shucks” way.

When the radio squawked, she tuned her ear to it. Four years on the job didn’t stop her heart from banging.

She jerked around to Barry, saw by his face his ear had been tuned in as well. She turned her head to her mic.

“Unit four-five is on scene. We’re right outside the theater.”

Barry popped the trunk, tossed her a vest.

Mouth dry as dust, Essie strapped it on, checked her sidearm—she’d never fired it off the range.

She knew the drill, she’d had the training—though she’d never really expected to use it. Active shooter meant every second counted.

Essie raced with Barry toward the wide glass doors.

She knew the mall and wondered what twist of fate had put her and her partner seconds outside the theater entrance.

She didn’t wonder if she would get home to feed her aging cat or to finish the book she’d started. She couldn’t.

She put the scene inside her head before they hit the doors.

Theater lobby opening to the main mall, turn right to ticket booth, move to concessions, left to corridor to the three theaters. Nine-one-one stated shooter in One—the biggest of the three.

She scanned through the glass, went through, tacked left as Barry tacked right. She heard the piped music from the mall, the rumble of shoppers.

The two guys at concessions gawked at the pair of cops, weapons drawn. Both shot their hands up. The jumbo soda in the hand of the one on the left hit the counter, smashed and splashed.

“Anybody else here?” Barry demanded.

One of them leaped toward a door behind the counter. The other stood, hands up, still stammering, “What? What? What?”

Essie turned left, cleared the corner, saw the body, facedown outside the doors of One, and the blood trail behind it.

“We got a body,” she told dispatch, and kept moving. Slow, careful. Past the laughter in the theater on her right, and toward the sounds pushing against the door of One.

She exchanged a look with Barry, stepped over the body. At his nod, she thought: Here we go.

When they dragged open the theater doors, the sounds of violence and fear flooded out, and the muted light from the corridor slid into the dark.

When they dragged open the theater doors, the sounds of violence and fear flooded out, and the muted light from the corridor slid into the dark.

She saw the shooter—male, Kevlar vest, helmet, night-vision goggles, an assault rifle in one hand, a handgun in the other.

In the instant it took her to register, he shot a male fleeing for the side exit in the back.

Then he swung the rifle toward the theater doors, and opened fire.

Essie dived for cover behind the wall behind the last row, saw Barry take a hit in the vest that flung him back and down.

Not center mass, she told herself as adrenaline pumped through her, not center mass because, like Barry, the shooter wore a vest. She sucked in three quick breaths, rolled, and to her shock saw he was charging up the sloping aisle toward her.

She fired low—hips, crotch, legs, ankles, and just kept firing even when he went down.

She had to shove aside the instinct to go to her partner, pushed herself to the shooter.

“Shooter down.” Keeping her weapon trained on him, she pulled the pistol out of his hand, slapped her foot on the rifle he’d dropped. “Officer down. My partner took a hit. We need medical. God, multiple gunshot victims. We need help here. We need help.”

“Reports of another active shooter, possibly two or more in the mall area. You confirm one shooter down?”

“He’s down.” She scanned his lower body, the mass of blood. “He’s not getting up.” Even as she said it, the shooter’s harsh, rapid breaths went out.

Bodies, splayed in the aisle, slumped in the seats, crumpled in the narrow spaces between rows where they’d fallen or tried to hide.

When a quad team burst through the theater doors, she held up a hand. “Officer McVee. Shooter’s neutralized. My partner.”

As she spoke, Barry coughed, moaned. She started to straighten from her crouch, swayed as her head swam.

“Next time I bitch about how hot and heavy these vests are, slug me.” He hissed in a breath. “Hurts like a motherfucker.”

“You got him, Essie. You got the bastard.”

More cops poured in, and medical first responders. While other police units rushed into the mall hunting for the other shooter or shooters, Essie worked with Barry to clear the theater’s bathrooms, storage area, lockers.

“You need medical,” she told him as they approached the ladies’ room.

“I’ll get it later. Nine-one-one caller.” He nodded toward the bathroom door.

Essie shoved it open, swept with her weapon, and caught a glimpse of her own face in the mirrors over the sink. Sickly pale, but better than the gray tone under Barry’s deep brown skin.

“Maybe she got out.”

The stall doors stood open, but one hardly more than a crack. “Simone,” Essie repeated as she walked over. “I’m Officer McVee with the Rockpoint police. You’re safe now.”

She eased the door open, saw the girl crouched on the toilet seat, her hands pressed to her ears.

“Help’s here now. We’ll find them for you. Let’s get you out of here, okay? You were really smart. You saved lives tonight, Simone, by calling for help.”

Simone looked up then, huge brown eyes drenched with tears and shock. “My phone died. I forgot to charge it, and it died. So I hid in here.”

“That’s good, that’s fine. Come on with me now. I’m Officer McVee. This is Officer Simpson.”

“The man, the man ran out, and fell. The blood. I saw—I saw—Tish and Mi are in the movie. My mom and sister are shopping.”

“You’re hurt, Barry. Take the kid. Get her checked out.”

She led the girl down the corridor, past the theaters. The situation report on her radio claimed two more shooters were down. She hoped that was all of them, but she needed to be sure.

But when Barry took over, steering Simone toward the glass doors and the flashing lights of cop cars and ambulances, Simone stopped, looked directly in Essie’s eyes.

“Tulip and Natalie Knox. Mi-Hi Jung and Tish Olsen. You have to find them. Please. Please find them.”

Essie headed the opposite way. She didn’t hear gunfire anymore and somebody, thank Christ, had shut off the music. Her radio crackled about areas cleared, calls for medical assistance.

She stopped, stared at the mall she’d shopped in, wandered in, grabbed a meal in, for as long as she could remember.

It would take time, she thought, almost numb, to clear the dead, to treat and transport the wounded, to take statements from those who’d escaped injury—physical injury, she corrected. She doubted anyone who lived through this night would come through unscathed.

Paramedics poured in now, but there were so many beyond their help.

A woman with blood running down her arm cradled a man—beyond help—in her lap. A male in a Red Sox jersey laid facedown. She could see gray matter in his head wound. A female, early twenties, sat weeping in front of Starbucks, her apron spattered with blood.

She saw a little pink sneaker, and though she prayed the girl who’d lost it found safety, it wrenched her heart.

She saw a man—early twenties/late teens stagger out of GameStop. His thick glasses sat askew over eyes as dazed as a dreamer’s.

“Just hold on a minute.” She turned away to use her radio, to ask if she could lead a group out, and to what checkpoint.

“What’s your name?” she asked him.

“I’m Chaz Bergman. I’m, like, the manager on duty tonight.”

“Okay, Chaz, you did good. Let’s get your people out now. There are officers outside who’ll take your statements, but let’s get everybody outside.”

“I’ve got a friend. Reed, Reed Quartermaine. He works at Manga—the restaurant. Can you find him?”

“I’ll find him.” Essie added him to her list.

“Is it over?” Chaz asked again.

For everyone touched by the violence that day, it would never be over.

From Shelter in Place by Nora Roberts. Copyright © 2018 by the author and reprinted by permission of St. Martin’s Press. 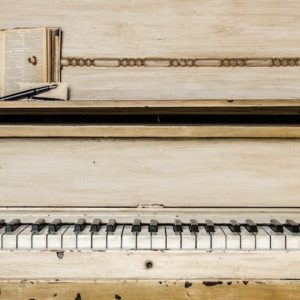 How Crime Writing Is Like Music I kill people for a living these days, but my first career was as a classical clarinet player. Clarinet was a bit of an odd choice...
© LitHub
Back to top