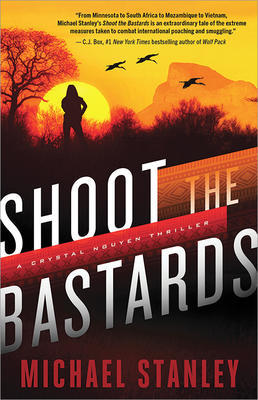 The following is an exclusive excerpt from Shoot the Bastards, a new thriller by Michael Stanley, author of the Detective Kubu Mysteries series. Crystal Nguyen, an investigative journalist of Vietnamese descent, heads to South Africa to report on rhino-horn poaching (and to find her friend, who disappeared while researching the same malfeasance), but soon finds herself accused of a crime much trickier than she could have imagined.

As Crys walked, all she could see were surreal shapes of trees and bushes and white images of impala and other animals that she couldn’t identify. It was a strange feeling, as though she was half blind. Fortunately, when she looked at the others in her group, she could make them out clearly – all were obviously human.

She wondered whether the poachers also had night-vision goggles. It was a scary thought. If they did, she and her group would be sitting ducks. And lions and other predators possessed natural night vision. She kept glancing around, scared half to death, but determined not to show it. She had to trust that Hennie knew what he was doing.

Suddenly, Crys heard something behind her. She jerked round. It was only Bongani, closer to her than she’d thought. She took a deep breath and moved on.

It was hard going. Crys struggled to walk quietly because the night-vision glasses didn’t show dead branches lying in her path. So, she began to mimic Hennie’s steps, trying to put her feet where his had been. Sometimes, they had to work their way between thorn bushes that grabbed their clothing, then wouldn’t let go. Once she tripped and had to save herself by grabbing a branch. Hennie swung around, but didn’t say anything. Crys could sense his irritation.

Progress was slow, but not random. Hennie knew where a ranger flying a microlight patrol had spotted a black rhino earlier in the day. It was close to where the most recent kills had been. He was hoping that the poachers had stayed around to bag another horn – another fat pay cheque.

After a long hour, Hennie called a stop by raising his hand and looking back down the line. Crys took a few gulps from her water bottle and chewed on a power bar. Hennie indicated that the group should huddle around him. Shielded from prying eyes, he checked his GPS to make sure they were on track.

‘Okay, listen up,’ he whispered. ‘We’re about a kilometre from where I think the rhino is likely to be. We have to be even more careful now. Keep at least ten metres behind the person in front. Bongani, you take up the rear and keep lookout behind.’

She wondered if this was how her father had felt when he was stalking Vietcong. It must have been terrifying doing this day after day, knowing that you wouldn’t hear the shot that killed you.

Bongani nodded, and Crys felt a surge of adrenalin. She wondered if this was how her father had felt when he was stalking Vietcong. It must have been terrifying doing this day after day, knowing that you wouldn’t hear the shot that killed you. She shuddered.

Hennie took off the safety on his rifle and indicated that all of them should do the same. The clicks sounded deafening, even though they tried hard to deaden the sound. He put his finger to his lips – as if they needed telling – then motioned them forwards. Crys waited for a few moments to let him get ahead, then followed.

The group moved even more slowly now, often stopping to make sure that the fuzzy images in their goggles were animals, not humans. After twenty minutes, Hennie stopped and pointed to the right. There, through the trees, Crys saw the white silhouette of a rhino. It couldn’t be anything else – the shape was unmistakable.

Hennie motioned them together again. And once again spoke in an almost inaudible whisper. Everyone leaned close and, even then, almost had to lip-read. ‘Kai and me are going around the other side. Bongani and Crys, you stay right here. Ariko is off to the south. Each of you find a big tree and stand right next to it. That’ll shield you from view from one side. You’ll see the poachers if they come, because they’ll have to get close to the rhino to shoot it.’ He looked at me. ‘You understand, Crys? No mistakes.’

She nodded and took several deep breaths, trying to slow her racing heart. Even with her exploits in northern Minnesota, she’d never put herself in such a dangerous situation before. And she’d never felt so scared.

The next hour crept by, and Crys was having a hard time keeping still. What made it worse was that she didn’t know what was going on. She couldn’t see Bongani, who was hiding behind a tree about twenty metres away. And she didn’t know what any of the others were doing. They were all out of sight.

The whole time, she was terrified that a poacher was creeping up on her, and that she could be killed at any moment. She was sure anyone nearby would hear her heart because it was pounding so loudly.

Suddenly a white figure moved out from behind the tree Bongani had chosen. Crys held her breath and took aim with her rifle, praying it was him and not someone else. The figure came towards her. Was it Bongani or a poacher? She couldn’t tell.

Crys let out her breath. It was Bongani. He leaned over and whispered, ‘Hennie has seen two people moving towards the rhino. He wants us to move around behind them to cut off their retreat.’

She nodded and gritted her teeth.

Bongani moved off to the left at a faster pace than they’d used before. Crys struggled to follow his footsteps while keeping an eye out for low branches and glancing back in case someone was coming up from behind.

They’d walked for another fifteen minutes or so, when Bongani stopped and motioned Crys to come up level with him.

‘Hennie says the poachers are within range. They’re going to shoot them.’

‘Without warning?’ Crys whispered. ‘Is that legal?’ She knew that some of the stuff she’d done in Minnesota wasn’t legal either. But none of it involved killing anyone.

She was sure anyone nearby would hear her heart because it was pounding so loudly.

Then two shots rang out, the boom of a big-calibre rifle and the crack from a smaller weapon. Crys thought that the bigger was probably Hennie’s Remington 80 elephant gun. Then came a fusillade of shots, then another two from the big-calibre.

Bongani put a finger on his earpiece for a moment and listened. Then he whispered, ‘Hennie thinks there were four in total. Two are down; the others are headed this way. You go behind that mopane bush over there.’ He pointed over to the left. ‘I’ll find another one. Remember, if you see anyone coming this way, shoot. Don’t wait for them to shoot first.’

‘It won’t be. They’ve something else to do…’

Before she could ask him what, he’d disappeared. She crawled behind the thick mopane bush and lay down, her heart beating wildly. She wondered what Hennie’s group could be doing. Maybe the rhino had been shot and needed attention.

After about ten minutes, a shot rang out. Crys nearly jumped out of her skin. It seemed to have come from right next to her. She looked around but saw nothing. Then another shot, equally close. Then silence.

The blood was pounding in her ears. She didn’t know if Bongani had done the shooting or had been shot. She turned her head slowly to look behind her. Nothing. Nobody. She breathed deeply, and soundlessly repeated her mantra to get her heart under control. Eventually it slowed down a bit.

Suddenly, a white image appeared from behind a tree to the right. Crys swung her rifle towards it and sighted.

It had to be Bongani. A poacher wouldn’t know her name. But she kept the rifle aimed at the oncoming figure, just in case. Finally, she lowered it.

‘Let’s check that the two I shot are dead,’ he said. ‘Then we must go to where Hennie is.’

Crys stood up and walked out from behind the bush. She was shaking. Ahead, she saw two white figures lying motionless.

‘Keep your rifle ready,’ Bongani said. ‘If the left one moves, shoot him. I’ll watch the one on the right.’

They moved slowly towards the two bodies, dodging from one tree to the next. There was no movement. Eventually, they were behind trees only a few metres away. Crys stopped, unable to believe what she’d got herself into.

She aimed at the man, not completely sure what she would do if he did move. Then Bongani ran from behind the tree and kicked a rifle away from the other man’s grasp. Then he kicked the man in the stomach. There was no reaction. He repeated the same thing with the man Crys was covering. Same result. Both were either dead or so severely wounded that they couldn’t react.

Crys held her breath as Bongani felt each man’s pulse.

‘Dead,’ he said, looking in her direction. He picked up the rifles and took all the bullets he could find. ‘Let’s go.’

‘Are you just going to leave them here?’ Crys choked, shocked.

Bongani nodded. ‘When the hyenas have finished, nobody will even know they were here.’ He walked on.

For a moment, Crys couldn’t move.

He turned to see where she was. ‘It’s better this way. Believe me.’

From SHOOT THE BASTARDS. Used with the permission of the publisher, Poisoned Pen. Copyright © 2019 by Michael Stanley.

Writing Violence Against Women in the Age of #MeToo 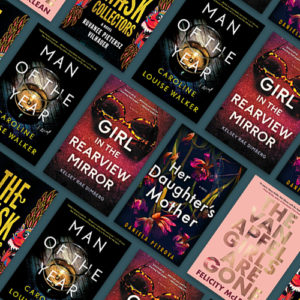 June's Best Debut Thrillers and Crime Novels Breaking into the crime game isn’t easy, but every month, a few brave and talented souls make a go of it. For readers,...
© LitHub
Back to top