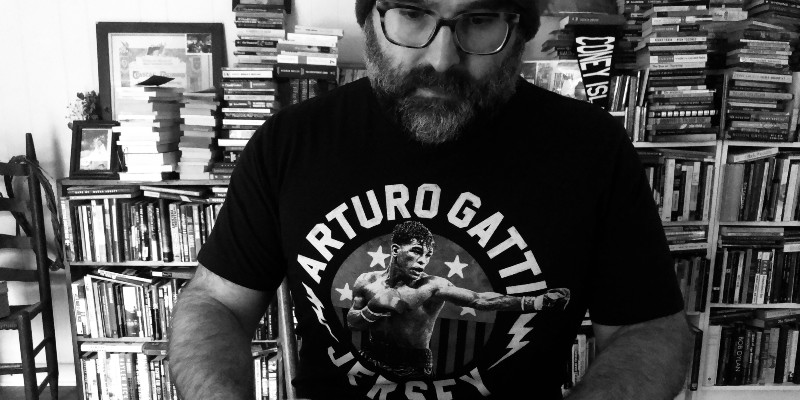 Back when I was a football coach, I used to call other coaches and “talk shop.” I wanted to know how they ran their practices, which plays they called on third and long. I wanted to know everything. Now that I’m a writer, not much has changed. Anytime I get a chance to meet up with other authors, I always want to talk shop.

“Shop Talk” is a column where I’ll chat with some of today’s leading crime writers about how they put the black on the white. We’ll cover everything from office setup to what a regular workday looks like, and all stops in between.

For the first installment of “Shop Talk,” I sat down with William Boyle, author of the novels Gravesend, The Lonely Witness, A Friend Is a Gift You Give Yourself, City of Margins, and Shoot the Moonlight Out (forthcoming from Pegasus Crime, November 2021). I met Bill back in 2019 at the Oxford Conference for the Book. We spent that night drinking at a local bar called City Grocery and listening to Tear Drop City put on one hell of a show. Fun was had by all, that’s for sure, but I’m glad I got the chance to talk with Bill recently and ask him all the questions I should’ve asked him that first night in Mississippi.

Eli Cranor: Set the scene in your office. What does it look like? Where do you work?

William Boyle: Well, I don’t have an office. The dining room has become my makeshift office. I’ve never really had an office at any point in my life. I’m kind of a floater. I just go wherever is comfortable. Lately, it’s been the dining room. I’ve definitely dreamed about having an office, but there’s something about the desperation of not having one that fuels me. I’ve always had it in my mind that Larry Brown built this dream writing studio and then like, you know, died. So yeah. I do like to work in coffee shops sometimes, but I haven’t really been able to do that much in the last year.

EC: Is there a specific coffee shop in Oxford you like best?

WB: For most of my time here it’s been this coffee shop called Uptown Coffee that’s right on the square. The coffee is really important. It kind of starts with that.

EC: Does it have to be a special brand of coffee?

WB: I just drink black coffee. Dark roast. I don’t like really good coffee, or really bad coffee. I’m somewhere in the middle. This brand I’ve been drinking lately is called Kicking Horse Coffee. As long as I have coffee, I’m good. A cup of coffee is usually five hundred, sometimes a thousand words.

EC: Besides coffee, do you have any other writerly vanities?

WB: Music. I have to put something in my headphones. Both when I sleep and when I’m writing, I can’t deal with silence.

EC: When you sleep?

WB: I have headphones in all night. Yeah. Same holds true for when I’m writing. I have to have something going. Instrumentals. Soundtracks. John Carpenter. Stuff like that. I’ve been listening to a lot of jazz lately. But for me, what’s most important is not getting sidetracked out of the gate. Not looking at the internet or checking my email.

EC: Do you do anything to safeguard against that?

WB: Just self-control for the most part. I mean, I will stop to look up stuff for the thing I’m working on. Other than that, I’m pretty good at not letting myself get too sidetracked.

EC: Speaking of sidetracked, you have two kids. How do you balance being a father and an author?

WB: The only successful writing I’ve ever done has been since I’ve had kids. Our son was born in 2010 and that’s really when I got most disciplined as a writer. There was a desperation added to the process that hadn’t been there before.

EC: Do you work better in the morning or at night?

WB: When I’m working on a book I like to start around five in the morning. I like the tension of having to get work done before other people wake up. Before the day gets going. If you gave me nine to five in a quiet room, I’d get less done than if I just worked in the morning. That’s my best time. I can write a whole day’s worth of stuff from five to seven.

EC: Are you aiming for a specific word count during that time?

EC: If you hit that mark early in your writing day do you stop?

WB: I don’t usually stop, but I try not to go until the tank is empty either. I think about that Hemingway thing. You want to leave the work at a place where you’re excited to get back to it.

EC: Take me through your writing process. How do you tackle the first draft?

WB: It’s changed for me over the years. Used to be, I’d just sit down with the seed of an idea and kind of wing it from there. I’ve gotten more into figuring it out first to save myself some trouble down the road. I spend almost as much time thinking about the story and the characters as I do writing the book. I never used to like to outline. I still don’t, really. I write something that reads like a fifteen or twenty page short story that’s just like the whole rough plot. Then I take that through a few drafts, let other people read it, and try to smooth down the spots where I think I could go wrong. It’s better to make a mistake that costs me a couple of paragraphs instead of a hundred pages.

EC: What happens next? Do you let the first draft sit before diving back in?

WB: I read it, usually pretty quick afterwards unless I’m feeling bad about it. But if I’m into it and I like it, then I go right back in. I send it to my wife next. Then I go back through it once more myself before sending it to my agent. When I was first starting, I had a couple of friends I’d ask to read stuff, but now I feel like that’s a burden on people. If you’re in a place where you have an agent and an editor—people who are getting paid to do this stuff—then that’s who you go to.

EC: What about your tools of the trade? Do you type straight into a laptop?

WB: I’ve never been comfortable working longhand. I loved typewriters growing up and used them a bunch until probably around my mid-twenties. Then it just got to be a pain in the ass to haul those around and get ribbons and stuff. I have this workhorse Toshiba laptop that is a piece of shit. I can’t believe it’s still working. I’ve written basically everything on it except for Gravesend.

EC: How old is that Toshiba?

WB: I got in, I think, 2013. My mom used to go to Atlantic City a lot. She won a penny slot tournament and got like ten grand. It leveled her up to high roller status where they just gave her things every time they went. She’d get a TV or a computer or an iPad. This lasted like four or five years. So there was this stretch where every piece of electronics we had was from the Borgata in Atlantic City, including this Toshiba laptop.

EC: Please tell me you’ve given that Toshiba a name . . .

WB: At some point, yeah, I think I was prompted to name it. So I went with “Balthazar,” after that donkey in the Robert Bresson movie Au Hasard Balthazar. Just kind of this sad donkey in this old French movie. But, I mean, I don’t sit here and call my laptop Balthazar.

EC: Are there any bits of writerly advice you hold close?

WB: I have a list of things I write down in a to-do list at the start of most days. Willy Vlautin, in an interview, said, “Always be a fan first.” I try to make sure I’m not just thinking about my own stuff. I try to stay focused on other people’s work, especially movies. I’ll get stuck on one director and watch a whole bunch of his movies over the course of a book. Finding my voice as a writer through things I love has been my way in. Megan Abbott gave a talk a few years ago on the value of weird choices. So that’s another thing I keep on my daily list. “Make weird choices.” I highly value the weird in general. The third one that goes in there is this Barry Gifford line: “Don’t get bitter.”

EC: Do you enjoy writing? The actual process of it? I remember hearing Tom Franklin in an interview say once that he enjoyed “having written.”

WB: Man, I feel self-conscious about answering that question. Fran Leibowitz in that Martin Scorsese Netflix documentary said something along the lines of people who enjoy the writing process are not good writers, and people who hate it are, or something. I don’t agree with that, necessarily. I mean, I just don’t think about whether I like it or not. I’m never just sitting down having a great time. I’m never sitting down having a fucking terrible time, either. It’s just what I do. It’s the work I’m cut out for.

Eli Cranor lives and writes from the banks of Lake Dardanelle, a reservoir of the Arkansas River nestled in the heart of True Grit country. His critically acclaimed debut novel, Don't Know Tough, won the Peter Lovesey First Crime Novel Contest and was named one of the "Best Books of the Year" by USA Today and one of the "Best Crime Novels" of 2022 by the New York Times. Eli is currently at work on his next book, Ozark Dogs, which will be published by Soho Crime in 2023. Eli Cranor played quarterback at every level: peewee to professional, and then coached high school football for five years. These days, he's traded in the pigskin for a laptop, writing from Arkansas where he lives with his wife and kids. Eli's novel Don't Know Tough was awarded the Peter Lovesey First Crime Novel Contest and was published by Soho Press in March 2022.
http://elicranor.weebly.com/ 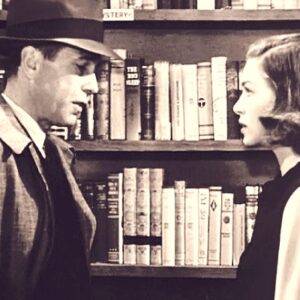 Many a mystery novel featuring an amateur sleuth places a librarian in that role. With good reason—outside of law enforcement,...
© LitHub
Back to top